On Intelligence, Effort, and Success

On Intelligence, Effort, and Success

This article discusses the sources of differences on intelligence and their effects on desirable outcomes in people's lives. The questions of whether intelligence is hereditary and whether an individual's performance is determined by a general factor of intelligence are very controversial topics. The reason is that the answers given impact political and social programs. After surveying possible explanations of intelligence, the relationship between intelligence and success is analyzed. Arguments against the heredity of intelligence and the lack of conclusive evidence for the "intelligence determines success" motto follow. An emphasis on personal effort for achieving desired outcomes concludes the discussion.

If you find something hard to grasp, do you immediately conclude that you have reached the limit of your cognitive ability and give up? Do you usually associate successful outcomes with smartness and failures with lack of intelligence? Do you consider intellectual ability an indispensable component of every accomplishment, or it is the effort-plain, sweaty hard work-that brings about the desired outcome?

The above questions tackle the dilemma of effort versus ability. Although it can be relevant to more than one topic and domain, this article will elaborate on the dimension of intelligence. Is intelligence a fixed, innate talent bestowed by heredity? Is it an accumulated, cognitive reservoir constructed through such personal factors as effort and motivation, and such environmental factors as held in common by family and community members?

The effort/ability dilemma has been very controversial in the West. It has not been a mere academic debate, but one with political and social implications and a very eager public interest. The publication of Darwin's The Origin of Species (1859) had a major impact on biology and other fields.

Francis Galton, a cousin of Darwin, advocated applying Darwinian principles to human society and coined the term eugenics, from the Greek words of "good in birth." In his Hereditary Genius (1869),(1) he argued that mental features are as hereditary as physical features, and that a selective breeding of human beings (similar to horse breeding) could raise the proportion of people with a better-than-average genetic endowment. This new approach helped Darwin extend his evolution theory in The Descent of Man (1871).(2)

Galton believed that intelligence and ability are fixed, innate, and determined by heredity. This idea is proven by accomplishments in competitive careers.(3) He proposed the encouragement of good marriages as a way to create a superior human race, not so much as a way of "unwanted" ones. Gregor Mendel's work on genetically transmitted dominant and recessive traits increased interest in eugenics.

The first half of the twentieth century witnessed an overwhelming belief in eugenics in academia and among intellectuals, politicians, and businessmen.(4) It became "an established fact" that single-unit genes determined such traits as alcoholism and mental incompetence.

Such conclusions naturally had political and social implications. For example, beginning in 1911, the United States tested arriving immigrants to assess their "worthiness." Since many of those tested did not speak English and had just endured a long and difficult sea voyage, scores were low, and particularly lower for certain ethnic groups.(5) As a result, the US Congress passed the Immigration Restriction Act of 1924, which enforced quotas for unfit ethnic groups. Many American states also passed laws mandating sterilization of inmates judged to be genetically inferior.(6)

The fiercest implementation of eugenics happened in Nazi Germany. The 1933 Eugenic Sterilization Law required compulsory sterilization of all German citizens deemed to be suffering from presumably hereditary defects, including offensive physical deformities. Sterilization of the unfit was later transformed into many of the war crimes committed during World War II.

Eugenics' association with World War II era war crimes and genocide ruined its popularity and reputation. However, some parts of its principles are still considered valid by some scientists in various fields. Two examples are the nature and causes of difference in human intelligence, and whether intelligence is hereditary or not. In other words, people are not identical to each other in the areas of comprehending complicated material, reasoning, learning, and solving problems. Researchers do not agree on the sources of these differences, and hence ask: "Is there a general mental ability called 'intelligence' that causes these differences, or is the underlying cause something else?"

Presented below are some contemporary theories about intelligence and its determinants.

The Psychometric View: This view claims that individual differences in human cognition or mental ability can be measured adequately by intelligence tests.(7) Many widely used tests seek to measure some closely related criteria, such as scholastic aptitude and academic success-not intelligence itself. Examples of such tests in the Unites States are the SAT or ACT (college admission), GRE (graduate school), and GMAT (graduate business school) exams. Although test administrators try to distance themselves from testing one's actual intelligence (namely, one's I.Q.), it is generally accepted by the research community that one's IQ and the above tests are closely related.(8)

IQ tests are offered in many verbal and non-verbal forms. The general practice for IQ scores is to scale them around 100 in such a way that 95 percent of the population falls between 70 and 130.

One American social engineering program is Affirmative Action. This program encourages underrepresented minority groups in society to pursue education and business through required quotas. For example, state universities are required to accept a certain percentage of minority freshmen. If the psychometric view is true, these programs will fail and amount to discrimination against the capable. In their controversial book, Hernstein and Murray maintained this view together with the heredity of intelligence and genetic IQ differences between races.(10)

In short, this view states that a single factor known as "intelligence" can be measured with IQ tests and predict success in life.

The Cognitive-Psychology View: Adherents of this theory view intelligence as a process, not an innate ability. The process consists of creating a mental representation of problems encountered, retrieving apparently related information, and devising a solution. In short, it emphasizes experience for success in life, but does not completely eliminate the relation between general intelligence and experience.

Gardner's Multiple Intelligence Theory: In his Frames of Mind, Gardner argues that psychometric tests ignore several aspects of intelligence. He also claims that the tests' paper-and-pencil format rule out many kinds of intelligence performances that are important for success in life.

Sternberg's Triarchic Theory: This view asserts three dimensions of intelligence: Analytic intelligence (similar to the psychometric, IQ-based view); creative intelligence (involves insight, synthesis, and intuition); and practical intelligence (the ability to grasp, understand, and solve real-life problems).(11) Although Sternberg does not reject some heredity in intelligence, he strongly believes that all three aspects of intelligence can be developed.

Problems with the Psychometric View

The psychometric view claims that intelligence is the single best predictor for individual performance at school and on the job, as well as for chances of divorce, dropping out of 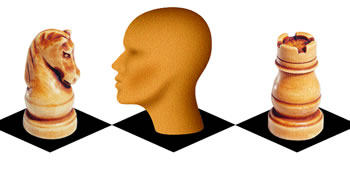 school, unemployment, or having illegitimate children.(12) However, the interactions and correlations of various factors in social studies make it very difficult to draw such conclusions. One cannot know for sure if intelligence is the cause or the result of the above-mentioned factors. It may very well be the case that some other criteria contribute to both the outcomes outlined above, and to the high scores as measured by IQ tests. Here are some remarks on the psychometric view of intelligence and its relation to success in life:

• Many people with high IQ scores fail to become successful due to a lack of motivation, personality, laziness, or short attention span. In contrast, some people with low IQ results succeed due to personal dedication, vision, systematic effort, and motivation. A low IQ score can be changed through conscious choice and effort. As an analogy, consider a gifted athlete. Some athletes have special talents for a particular sport. However, they fail to perform as well as those without those talents, for the latter depend on systematic effort. Readers familiar with sports can name several specific examples of this phenomenon. • An IQ test may be a speed issue. That is, it may measure only how quickly people learn or solve complex problems. It is a well-known fact that once something is learned, the performance of a person with a lower IQ is not significantly different from that of a person with a higher IQ.

• A certain amount of intelligence seems to be needed to gain entry into an intellectually demanding field. However, beyond that point, success is determined by the effort put into the job, social support, and experience.

• Average IQ test scores have been increasing in the West for several decades. However, school performance has remained almost constant, if they did not actually decrease. This clearly indicates that success in life is not directly related to IQ scores.

• People can improve their test scores by becoming familiar with the test. This implies that expending the necessary effort can affect the outcome.

• Cultural and family environments (e.g., beliefs, oppression, poverty, fear, and lack of health care) together with such biological factors as nutrition and exposure to toxic substances (e.g., alcohol), affect IQ scores. Flynn analyzed Asian Americans' IQ test scores and found that they were always around 97 or 98. However, their academic and professional achievements were remarkable; equivalent in achievement to people with IQ scores of over 120! This can be attributed to a cultural belief in learning, as summarized in Gorner.(13) According to Claxton, Western cultures focus on ability as the major determinant of success. If you fail, it is probably because you were not smart enough. Asian cultures, however, emphasize effort and generally consider failure the result of a lack of effort.

• A common error is to assume that something heritable is unchangeable. Infants adopted into advantaged families tend to have higher IQs in childhood than would have been expected, had they been raised by their birth parents.(14) This is further proof that how a child is raised and what he or she is exposed to have very long-lasting effects. Further, and individual's personal choice has considerably more impact on one's life than usually thought. A recent initiative at the University of Chicago, the RealAge Program led by Michael F. Roizen, stresses the importance of an individual's choice on how long and how well they will live. He claims that 70 percent of this is determined by one's personal choice.(15) So even if heritability is high, intervention is possible.

• Some claim that IQ tests measure nothing more than cultural conditioning, education, and language fluency. As these are not inherited in the same way as eye color and other physical factors, they can be modified.

Considering the above remarks, it is very difficult to conclude that intelligence can in any way be a fixed, innate ability that determines success in life. If the very few exceptionally gifted and mentally retarded people are left out, most people have an almost equal potential for success in life. Men and women were created for the purpose of learning. This lifelong learning process and its outcome are closely tied with the effort expended. Anybody can become better at anything, provided that they strive for it with the means available to them. Encountering difficulties should not prevent people from trying harder. Learning to learn is possible, and depends upon the willingness to stay engaged when faced with uncertainty. Without rejecting the effect of genetic factors, we can have a significant effect on our own well-being and success in life through conscious choice and effort.