The Adventures of Ibn Battuta

The Adventures of Ibn Battuta

Ibn Battuta left Tangier in the Maghrib (contemporary Morocco) in 1325, about 25 years after Marco Polo returned from his journey. Ibn Battuta has been called the Marco Polo of the Orient, a title that places his importance below that of the Venetian while nonetheless placing the two in the same category. In fact, one of the most interesting aspects of Ibn Battutas work is its striking similarity in many parts to Marco Polos narrative.

Ibn Battuta and Marco Polo traveled through many of the same lands less than 50 years apart. They were able to do so, in part, due to some of the same conditions: the Pax Mongolia had united (and devastated) much of Central Asia, and China and India were relatively stable. Marco Polo traveled during the height of the Pax Mongolia, while Ibn Battutas travels occurred while the first effects of the Plague were being felt. In many of his descriptions, especially of older cities located in the vicinity of Persia and Central Asia, the destruction wrought by the Mongol conquest was still evident. Although Marco Polo and Ibn Battuta did not travel exactly the same path, a reader of both books nonetheless gets a sense of the changes occurring in those areas during the thirteenth and fourteenth centuries.

Unfortunately for historians, Marco Polo does not always notice the same things, or simply chooses not to mention them. As he is concerned almost exclusively with what the land and its inhabitants produce, he rarely notices or comments on the destruction and decay that pepper many parts of Ibn Battutas travel narrative.

Travels in a Stricken Land

Ibn Battuta finds the first signs of decay after he leaves Makkah for Iraq. He leaves the main caravan to travel to Basra, which had been a main center of Islamic learning. He notes that he has to travel in the company of a large group of native Arabs, for it is impossible to travel in those regions except in their company. At least one danger he faces is that of Arabs inhabiting a waterlogged jungle of reeds in the area, who in fact did attack and plunder a party traveling behind his. Ibn Battuta does not comment on this, but the necessity of traveling with an armed escort and the constant threat of highway robbery would seem to indicate a weak central state.

Upon his arrival in Basra, Ibn Battuta is told that a large building located some distance outside of the city, the Mosque of Ali, used to be in the middle of the city. However, Basra has shrunk so much that it now stands alone. Another indication of Basras diminished status is the fact that during the Friday congregational prayer, the preachers sermon contains grammatical mistakes. He is also told that no one in the city speaks or writes grammatically correct Arabic”and this in the very city where Arabic grammar was devised and established! So it appears that this area has slipped from the control of whatever centralized government once controlled it, that the population has left, and that it is no longer a center of learning.

Reporting on his trip to Kufa, the other historically great garrison city in Persia, he writes that it also has diminished in size and prestige: Though it was once the abode of the Companions of the Prophet and of scholars and theologians, as well as the capital of Ali, Kufa has now fallen into ruins as a result of the attacks which it has suffered from the nomad Arab brigands in the neighborhood. That such a formerly important city has been left so vulnerable that even a band of brigands can attack it at will again indicates the central governments increasing weakness.

Even the western part of Baghdad is found to be partially in ruins: The hospital is a vast ruined edifice, of which only vestiges remain. Traveling near the Tigris river, he finds yet another city in ruins, as well as Jazirat ibn Umar and Nisibin. He observes a similar swath of destruction in Central Asia and in areas located to the north of India.

Marco Polo notes that some cities have been destroyed, but Ibn Battuta goes into much more detail. Bukhara, once the capital of the lands beyond the Oxus river, is mostly destroyed; Samarkand is likewise mostly in ruins, as is Balkh, where Genghis Khan partially destroyed a mosque in his search for treasure; Banj Hir (Panjshir) city has been destroyed, and the surrounding country uninhabited since that time.

Marco Polo and Ibn Battuta resemble one another in their fondness for miracles, especially those that validate their own religion or sect. Marco Polo tends to be more enthusiastic and narrates many miracles (second-hand) at great length, while Ibn Battuta is generally more skeptical. In addition, his miraculous happenings, if usually not very miraculous in nature, are easier to believe.

For example, he relates how the Caliph Walid I wish to expand the Umayyad mosque in Damascus into the area occupied by a church. The Greek Christians refused to sell the land, for they believed that anyone who destroyed the church would be stricken with madness. The caliph decided to set an example and thus began to tear down the church with his own hands. According to Ibn Battuta: The Muslims on seeing that followed his example, and God proved that the assertion of the Christians was false. Although Ibn Battuta does not exactly claim miraculous status for this event, the tone is very similar to the one used by Marco Polo to describe miracles performed by Christians in Muslim lands.

Many of Marco Polos miracles are a sort of polemic against Muslims, and many of Ibn Battutas miracles, as well, are polemical. He does not direct them against Christians, however, but rather against the Shiah, whom he dislikes intensely. He writes of a man who told the Shiah that he was the mahdi (the awaited messiah) and convinced people that he was going to perform many miracles. Of course none were actually performed.

He mentions the place in Mashhad Ali, located in the city of Najaf, that supposedly holds Ali's tomb. The townspeople, all Shi, regard the miraculous healing of the sick that is said to occur there as proof that the place is, in fact, Ali's final resting place. Ibn Battuta comments that the fact is widely known among them, and I heard it from trustworthy authorities, but I was not actually present on any such night. He also says that he saw some cripples there who were waiting for that night. Although he does not refute these events, he appears to be very hesitant to actually believe and confirm them. One might simply attribute this to his reluctance to give credence to supposed miracles that he did not actually witness. However, he is not so cautious about believing such stories in other places. For instance, during his stay in Shiraz, he visits the illustrious Shaykh Majd al-Din Ismail, the marvel of the age [who] is held in the highest esteem by the sultan of Iraq, for reasons which the following story will show. 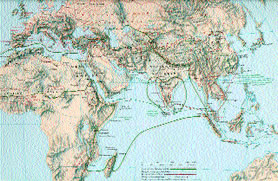 He then relates how this shaykh was the judge of an Iraqi province that refused to turn Shiah. The sultan was infuriated and had him brought to his summer residence to be thrown to the large, fierce, man-eating dogs that he kept there. However, when the dogs were loosed on the judge Majd al-Din, they would not attack him but wagged their tails in the friendliest manner. The sultan thereupon rejected the Shiah doctrine. This incident is treated as something of a miracle and related in rather strong language, although Ibn Battuta did not actually witness it. Therefore, it does not seem that he is overly reluctant to accept miracles when it suits his purpose.

Views of Other Peoples

Although, as the translator points out, Ibn Battuta is quite tolerant of Christians (despite his frequent derogatory references to them), Marco Polo's hostile attitude toward Muslims is mirrored very accurately in Ibn Battuta's attitude toward the Shiah. He describes them as abominable people who hate the Ten Companions and every person whose name is Umar, and as revilers who hate the ten. He claims that in Sarmin, one cannot even mention the word ten. At one place, he refuses to enter the city because the inhabitants are fanatical Shiah. All of this is no doubt due in large part to his strict Maliki views. Another similarity between the two traveler's work lies in what they choose to include and describe. One of the most striking elements is the character and appearance of the people they encounter. Generally, Ibn Battuta has good things to say about the people he meets, such as his assertions that the inhabitants of Makkah are very kind to strangers and the poor, the people of Shiraz are very pious and upright, and the women of Sana are virtuous and have many fine qualities. He also writes: I have never seen anywhere in the world more excellent people than the Khwarizmians, or more generous or more friendly to strangers. In Hinawr, the women are beautiful and virtuous. When he meets people he does not like, he is not slow to explain why. In Taizz, for example, the people are overbearing, insolent, and rude, as is generally the case in towns where kings reside. And the inhabitants of Bukhara are looked down upon and their evidence is not accepted in Kharizm and elsewhere, because of their reputation for fanaticism, falsehood, and denial of the truth.

Although Ibn Battuta and Marco Polo wrote their travelogues for somewhat different reasons, as they were of different religions and backgrounds and faced different circumstances, the two authors show a remarkable similarity in their approaches to their subject matter, that which interests them, and their reaction to the places they visit. Their works of course differ in some ways, but the similarities argue rather forcefully that the cosmopolitan, unified world to which they both seem to have felt they belonged did, in fact, exist