Terror From an Islamic Prospect

Terror From an Islamic Prospect

The word Islam is derived from silm and selamet, which mean submission, salvation, providing trustworthiness, and peace. Innumerable arguments in Qur'an and the Hadith literature, the essential sources of Islam, support these meanings. Besides, all actions leading to or ending in violence and terror are forbidden in the strongest possible terms. Among the central tenets of Islam, which depicts true reality, is that peace and trustworthiness are to be adhered to in all aspects of one's daily life.

Judaism and Christianity also emphasize peace and trustworthiness. No revealed religion can clash with another. Furthermore, all of them'but especially Islam'thoroughly reject corruption, oppression, and conflict.

Historically, Muslim governments did participate in battles and wars, just like any other government. No government or religion can claim not to have participated in such events. But I would like to remind the readers of the words of the man who was tortured on the cross: 'Let him who is without sin cast the first stone' (John 8:7).

All claims of innocence in this matter are no more than distortions of history. Islam allows military action only in the cases of self-defense or to repel those who interfere in its affairs. Over the centuries, a vast body of literature on the proper conduct of war was developed. Today, such guidelines are known as 'laws of war.'

Many Qur'anic verses deal with the concepts of justice and peace, both of which are the current essence of the modern legal system developed to protect life, capital, and reproduction. For example: Deal fairly, and do not let the hatred of others for you make you swerve to wrong and depart from justice. Be just, for that is next to piety, and fear Allah (5:8); If someone kills another person, unless it be for murder or for spreading mischief in the land, it would be as if he had killed all people (5:32); If the enemy inclines toward peace, you (also) incline toward peace and trust in Allah, for He is the All-Hearing, All-Knowing (8:61); and O believers, enter into peace (Islam) wholeheartedly, and do not follow Satan's footsteps, for he is your avowed enemy (2:208).

In the Hadith literature, Prophet Muhammad describes Muslims as those people from whom others are secure from their tongues and hands.(1) In other words, those Muslims who are not known for their provision of security and trustworthiness to others must reexamine their claim to be Muslim.

In another hadith, the Prophet was asked: 'Which action is more virtuous in Islam?' He replied, and I hope his response brings us to sharp vision in this theme: 'Muslims who invite others to their meals and who give greetings to everyone, even if they have never met before.'(2)

I would like to give some more hadiths to clarify even further the Prophet's view on this subject:

The Prophet spent first 13 years of his mission in Makkah, where they endured severe persecution and an embargo by the pagans. Abu Jahil, the Prophet's leading enemy, was responsible for causing great pain and suffering to the Prophet, who never answered back with hatred. Instead, he and his followers followed a policy of patience. One day Ikrimah, the son of Abu Jahil, converted to Islam. Some Muslims who had not yet fully accepted the values of

Islam in their hearts and minds, started to blame Ikrimah for what his father had done. But the Prophet rebuked them by saying that 'cursing your own mothers and fathers is one of the big sins.'(3) When they asked how people can 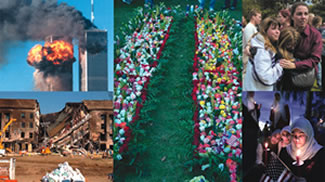 curse their own parents, he replied: 'If you curse someone else's parents, they curse your parents. Thus it is like cursing your own parents.'

As the following examples indicate, annoying others is equal to annoying to your own parents.

Those who research such issues in Islamic history will find that Muslims have been representatives of peace and trustworthiness throughout history. Thus trying to associate Islam with terror is both a distraction and an injustice, an enormous example of ignorance that history cannot forget.

Thus we can say with full confi-dence that there is no terror in Islam. Terrorists are not Muslims, and Muslims cannot be terrorists. Islam and terror are like black and white or spring and winter. They are sharply different from each other, and terror cannot approach Islam. In connection with the above logic, Muslims must be legitimate in their intentions when it comes to their goals, thoughts, and actions, for only a straight and allowed way can lead them to their exalted object.

Islam equates the killing one innocent person to killing humanity, and prescribes eternal hell for such an action. The Prophet stood up for the funeral procession of a Jew out of respect for the fact that the deceased was a fellow human being. Certainly such religion never allows terror for any purpose.

September 11th will remain a blemish on the pages of human history. Although no Muslim approves of such terrorist acts, the print and visual media continue to do their best to link Islam with terror so that we will see them as related to one another. I am very sorry to say that some media outlets are doing this intentionally in order to make all Muslims appear guilty.

Another part of this is the circumstances in Muslim countries. We must realize that no Muslim country, when considered from the viewpoint of administrative, legal, and economic matters, exists. What we mean by that phrase is countries with majority Muslim populations. Many of them have movements for independence and also have to cope with the pressures of artificial and oligarchic governments, poverty, ignorance, lack of accurate religious knowledge, geographical difficulties, and unjust distribution of wealth; continued intervention from outside forces who want to block democracy from taking root; easy imports and the consequent non-improvement in domestic production, export, and economics; and, more than anything else, the role of the media in undermining moral values. All of these problems are confronting the Muslims and make them appear in an unfavorable light.

If any Muslims are joined to or associated with terrorism and anarchy, it is because they do not understand Islam correctly and because the existing realities in their countries to do not allow them to acquire a correct understanding. But the roots of these causes can be traced only to cultural, economic, and other related reasons'not to Islam.

In our increasingly smaller and global world, developed countries and international associations are more often than not only spectators that make no contribution to other nations' growth and do not take seriously their responsibility to make this world a better place for everyone.

In conclusion, when we look at terror from the Islamic prospect, we see that it causes only disaster and tragedy in this world and leads to Hell in the Hereafter.