The Tiniest Captains of the Ocean

The Tiniest Captains of the Ocean

The date of invention for compass still is not known with certainty. Some historians think that it was invented in China around 900 BC, while others claim that it was around 100 AD. The use of a magnetized needle as a navigation tool, however, was not until twelfth century. This brief information can be found from history books, after a quick search on the history of compass. However, it cannot be considered complete, since it does not mention the nation that has been using nanometer size magnets to find their directions for millions of years. They are the navigators of deep oceans and small ponds utilized with a technology that took thousands of years of humankind to discover. They are magnetotactic bacteria.

In the early 1970s, a young graduate student, Richard Blakemore, observed an interesting group of bacteria in a mud sample collected from Eel Pond in Massachusetts. These bacteria were migrating through a certain edge of the microscope slide. Rotating the slide did not affect their motion; they were still moving through north. Repeating the experiment in the dark also showed that it was not light that affected the bacteria’s swimming direction. The experiments left one possible explanation to the directed motion of the bacteria and that was a crazy one-that they were sensing the magnetic field of the earth! It wasn’t hard for Blakemore to place a magnet next to the microscope slide and to prove that the crazy idea was indeed true. The bacteria were attracted by the south pole of the magnet and repelled by the north pole of it. This was the beginning of a new field of an interdisciplinary research, which attracted many scientists from very different fields such as, microbiology, physics, geophysics and paleogeology. 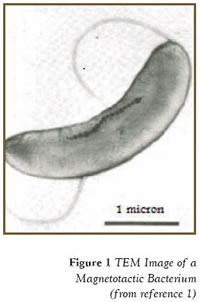 To understand how magnetotactic bacteria feel the magnetic field, it would be useful to check one’s transmission electron micrograph (Figure 1). The chain of magnetite (iron oxide) crystals forming a specialized organelle, called magnetesome, can be seen easily. The length of the whole chain is around one micron and each small crystal is around 50-60 nanometers. Each small crystal can be considered as a small magnet. These small magnets are aligned in a way that they support each other and the chain becomes a strong magnet. A lipid bilayer membrane surrounds this chain and holds them together. Forming chains on a straight line is not an expected behavior for small magnetite crystals. If they are produced synthetically, they accumulate together to form an aggregate. The pathways of chain formation in magnetesome are still an open question. 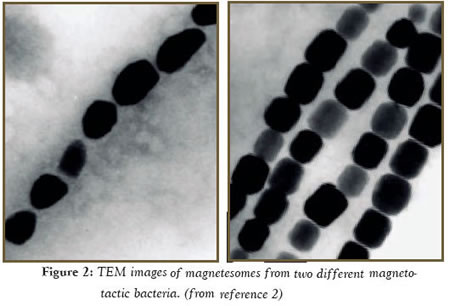 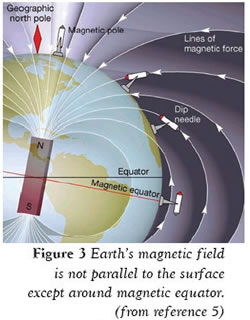 Being north seeking or down seeking, i.e. polarity, is a genetic property for magnetotactic bacteria. Almost all progenies (descendants) of a north-seeking cell are also north-seeking cells. However this requires partition of magnetesomes to each daughter cell during the division. Occasionally, daughter cells may have no magnetesomes or they maybe too small to have a magnetic moment, so they develop their own magnetesomes. When these progenies develop their own magnetesomes they may have either polarity. Therefore any natural population of magnetotactic bacteria has less than 0.5% “wrong” polarity members. Wrong is written in quotation marks because without that “mistake” magnetotactic bacteria would live only in one hemisphere of the earth.

Magnetotactic bacteria are not the only creatures that can sense geomagnetic field. For example birds, also, can sense geomagnetic field and find their direction while they are migrating. However, birds use other factors such as sun and the horizon to find their direction and their body is much more complex. Also they do not sense magnetic field in a mechanical way like magnetotactic bacteria do, but probably they have some complex chemical ways of magnetic reception. That is another research field by itself and this article’s volume is not enough to go into it.

Everything, every entity that we see around us calls us to reflect upon their Creator. The ones that we see with electron microscopes or high-tech tools are not exceptions. Magnetotactic bacteria synthesizes magnetite crystals from scratch and then puts them in an order like beads hitched on a string. Could it be possible for them to manage this incredible task on their own accord and without acting in the name of God? To this day we cannot even understand the basic principles of that process to its complete degree in order to mimic it. In fact, the more we understand the more we esteem and at awe we become from the great craft of Supreme Artist. 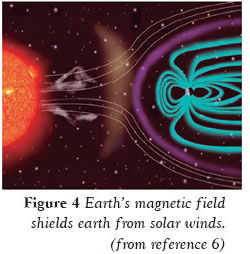 Auroras (northern lights), with their beautiful colors, make long winter nights more bearable in Arctic Circle. They are emitted by charged particles, something very harmful for living creatures if ever reached to earth’s surface and trapped in earth’s geomagnetic field. (Figure-4) While thinking about magnetotactic bacteria I remember those beautiful scenes I had seen in pictures that had caught my awe and wonder and can’t help but express deep gratitude once more to the Creator and Sustainer of it all, of us all, who guides the tiny little cells to more livable environments with the very same geomagnetic field that He protects us from harmful solar winds. Extraordinary is the ordinaries we are surrounded by!

Ahmet Uysal is a PhD candidate in Physics at Northwestern University, Evanston, IL.