Today, humans get most of their energy from fossil fuels. We know this rate of consumption isn’t sustainable. Will fuel cells be the primary energy source of tomorrow?

Humans have always needed energy. Throughout history, humans have developed various systems to produce this energy. Just as man was created, so, too, were the energy sources we need to survive. We just have to find them. Finding and extracting this energy has been enormously important to human civilizations.

Today, accelerated population growth, technological advancements, and growing industrial sectors have contributed to a rapid increase in our energy demand. The major portion of energy (around 86%) consumed worldwide is generated from fossil fuels (as of 2013). Diminishing fossil fuel reserves underline the significance of new and renewable energy sources. One of the first places scientists are looking is our first source of energy: the sun. Its light has been utilized by societies for power and food throughout history, and today, scientists are searching for new ways to utilize the sun. Another field being researched is electrical energy. From this research, fuel cells have been developed as alternatives to fossil fuels. Are there any differences between battery cells that we use in devices like flashlights, radio, and toys, and these fuel cells?

Why is a system with so many advantages not widely used in our daily lives? Fuel cells have not found the common use they deserve because of many reasons: they are difficult to install, the need for high level information and technology to use them, and higher expenses during installation. And then, of course, there are the petroleum companies – cartels, really – that have done everything in their power to block the spread of alternative energies.

The first fuel cell was developed by Sir William Grove in 1839. NASA first used fuel cells in 1952 to supply electric energy to a space craft. In the 1960s, these cells were proven to be valuable for transportation after the production of the first fuel cell powered tractor. In 1966, a vehicle called the Electrovan was designed by General Motors; it worked with a fuel cell (Figure 1). These advances were followed by a fuel cell powered train in the 1980s, a submarine in the 1990s, and eventually planes. In addition to all these applications, recently, fuel cells have been widely used in power plants.

A fuel cell system is made up of an anode, cathode and electrolyte material. As seen in Figure 2, while the separated electrons of fuel (hydrogen) are sent to the anode, they continue their way to the cathode on the circuit; then, the hydrogen ions, with their lost electrons, move on to cathode over the electrolyte and here the circuit is completed by the reaction of air with electrons arriving from the anode. This generates an electric current at the arm where the electrons are routed towards the outer circuit.

Today, fuel cells are manufactured for various goals. It is possible to classify fuel cells according to fuel consumed, the type of oxidizing compound used, or the conversion of consumed fuel to “usable fuel” inside or outside the fuel cell. Aside from these, some fuel cells are also classified by operation temperatures or electrolyte differences. The most common designation is based on the electrolyte type.

Solid oxide fuel cells are the most efficient in terms of converting chemical fuel directly into electrical energy. The basic ideas regarding these cells were presented towards the end of the 19th century by Nernst and his friends. Furthermore, new theories are still being proposed and experiments carried out, even a century after their discovery.

The efficiency in this type of hybrid system can reach up to 70%. The oxygen ions in these cells are carried over a solid oxide electrolyte material to react with the hydrogen in the anode at high temperatures. The reaction taking place in the anode and cathode in a solid oxide fuel cell is as follows:

Solid oxide fuel cells have many advantages over other fuel cells:

Even though fuel cells are not widely used, they are employed in space works, military projects, uninterrupted power supply systems, mobile power sources, waste water treatment, and vehicles. The power generation and use of solid oxide fuel cell systems in developed countries increases every day. For example, a 40,000 kW' (40 MW) section of the electric demand in Tokyo, and an 11,000 kW (11 MW) portion of the demand in Rokko Island, are covered by solid oxide fuel cells. The electricity consumption of some malls, homes, and apartment complexes in America, Japan, and Germany are also covered via solid oxide fuel cells.

In 2009, Nissan started using solid oxide fuel cells in its model Nissan X-trail FCV (Fuel Cell Vehicle) and managed to achieve around 40% efficiency. It has been reported that this fuel cell, with a 1 cm³ volume, has a capacity of 2 kW at an operating temperature of 550 °C using hydrogen fuel. The solid oxide fuel cells manufactured by the DELPHI company for commercial and military fields are at 5 kW capacity, with a near 40-50% efficiency. Another major advantage of these fuel cells is that they operate both noise and emission free. With the solid oxide fuel cells that Sweden started using on a ferry called UNDINE, in 2010, a power of 20 kW is generated, and this runs the navigational and radio devices at the harbor.

There are many ongoing studies regarding the use of fuel cells in mobile devices. The fuel cells designed for laptop computers and mobile phones are still in their prototype phases, but are expected to be marketed within a couple of years. Today’s mobile phones, with regular batteries, can only operate for a few days before they need to be recharged. Tomorrow’s phones will be able to function nonstop for a month with fuel cell technology. In addition, laptop computers, which now only last for 3 or 4 hours, will work for 2 or 3 days. These mobile applications are also suitable for military tasks, including land, air, and sea crafts. In terms of stationary applications, giant power plants established outside residential areas will be replaced by more localized power plants, thus shortening power transmission lines and preventing energy loss. This system can even be applied to a domestic scale in our homes. 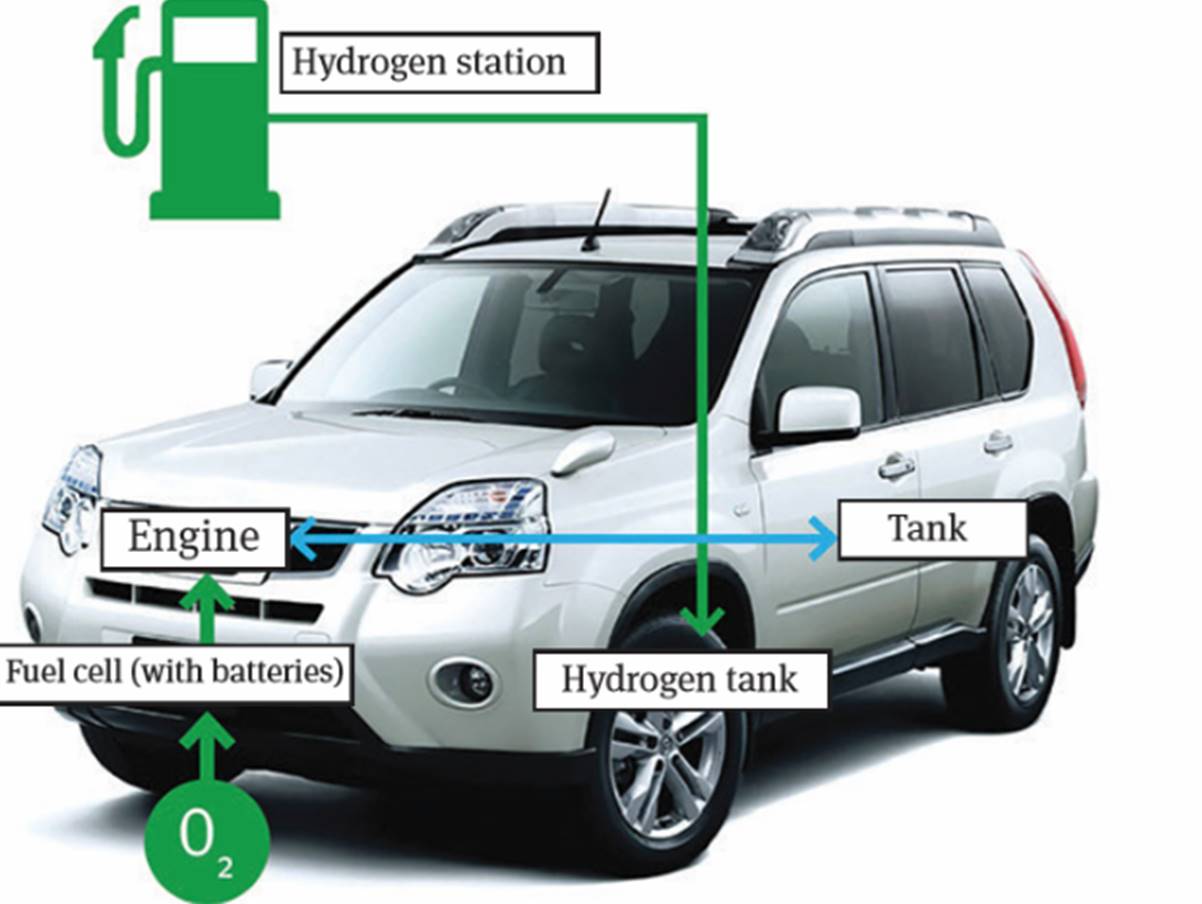 In fuel cells, electricity is generated when the hydrogen and oxygen supplied in a system reacts with an electrolytic material. Solid oxide fuel cells are predicted to be one of the most common systems to generate electricity in the near future.

To widen the present uses of fuel cells, efforts continue to reduce the cost of its installation expenses and to advance its technology. In conclusion, in a world where our energy dependence increases daily, fuel cells, used as an alternative and renewable energy source, and especially solid oxide fuel cells, are a candidate to be an essential power source in the future. This should be considered as a big opportunity for countries dependent on foreign energy. There are major benefits for researching and investing in fuel cells. 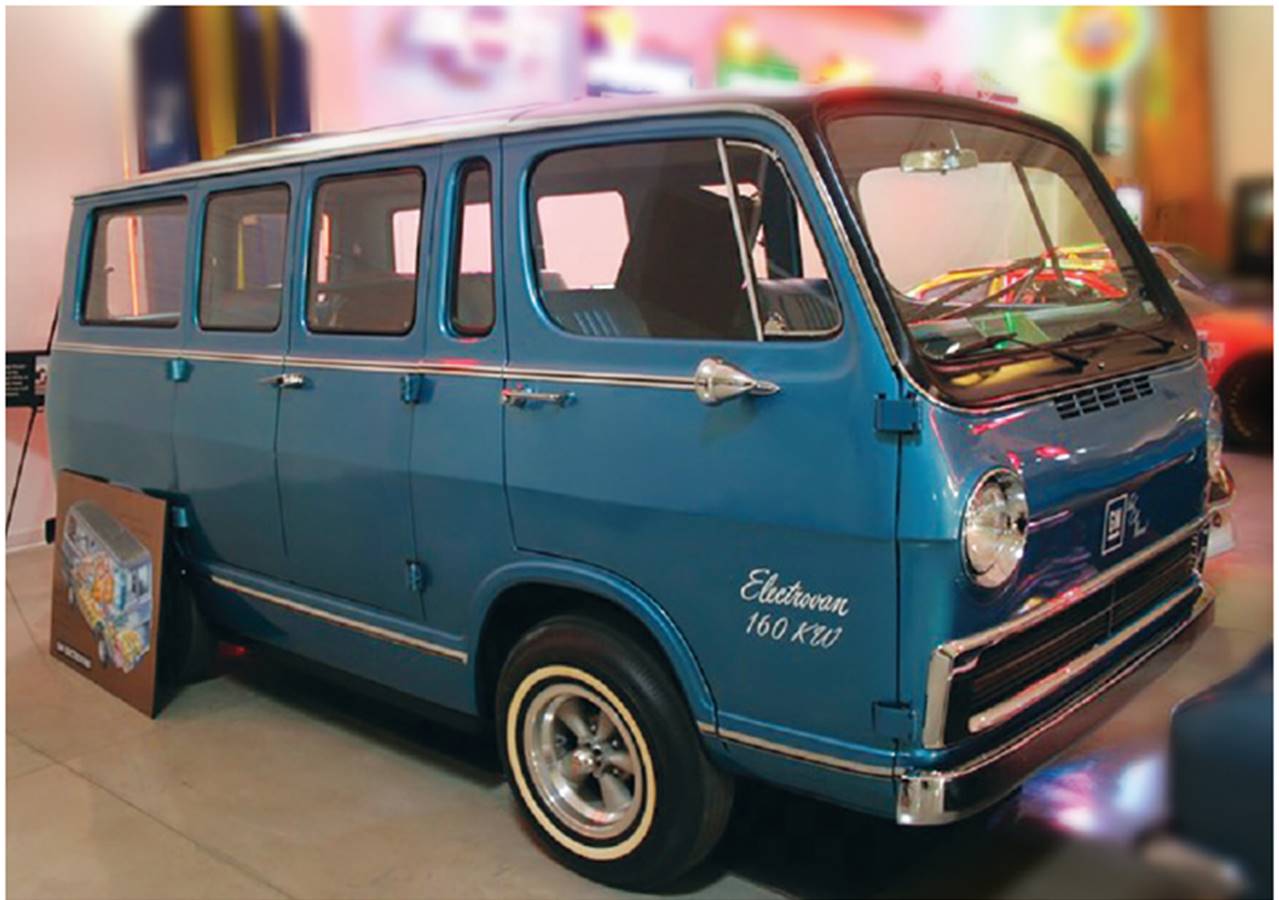 Figure - 1 A minivan powered with fuel cells manufactured by General Motors in 1966. 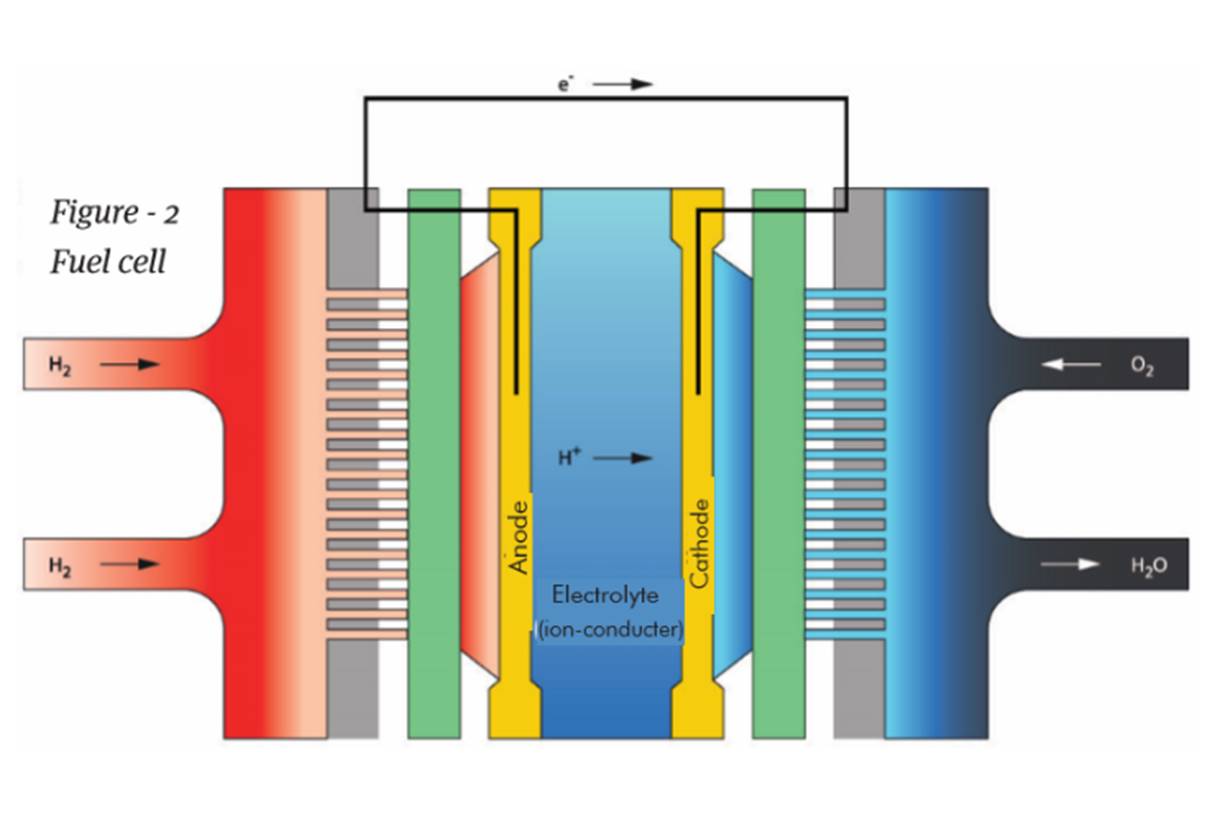 Figure 2 The schematic outline of the fuel cell