We Are Firefighters - “We Are Not Asking Who Started the Fire” 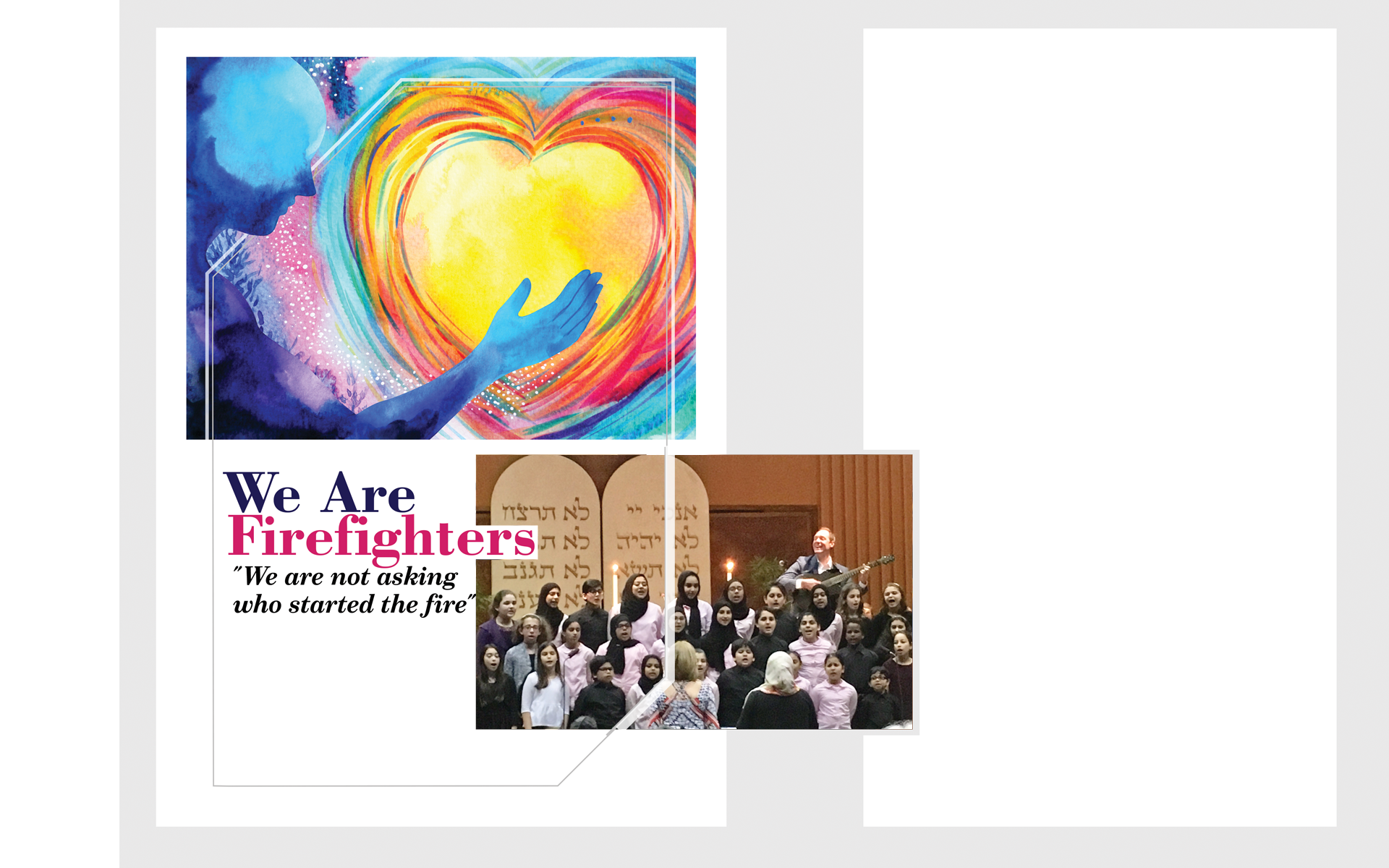 The city of Kaolack in Senegal is a major destination in Africa for those seeking a spiritual path. Inspired by the mystical teachings of the Tijani order, hundreds of thousands of followers come to Kaolack to learn lessons (wird), and especially to join the annual Mawlid celebrations to honor the Prophet Muhammad’s birth, peace be upon him. I cannot forget the day when I visited this city with a group of friends in February 2013. As we were getting out of our van we were welcomed by a group of young men singing for us what is famously known as “The Poem of the Cloak” (Qasida al-Burda), an exceptionally beautiful poem written by Imam al-Busiri, a 13th century North African scholar and poet. This qasida, or hymn, is one of the rare examples of poetry that has been globally adopted, translated, and memorized by Muslims from the far east to the West Africa to honor the Prophet’s memory.

Five years later, in February 2018, when I heard the same hymn being sung live to welcome guests, I was in Washington, D.C., at the nation’s one and only synagogue established by a special act from the Congress: Washington Hebrew Congregation (WHC). Muslim boys and girls of the ADAMS Center youth choir, who were singing the hymn, were welcoming Shaykh Abdallah bin Bayyah, the respected Mauritanian scholar (dob 1935) from Abu Dhabi. Indeed, it was a rare scene of a turban-wearing imam entering a Jewish temple to address a Jewish audience.

Shaykh bin Bayyah was hosted by Rabbi M. Bruce Lustig, who led the service, “A Sabbath of Peace.” It proved to be a remarkable interfaith event among members of different faith communities who prayed together and sang songs of peace.

In his introduction, Rabbi Lustig told about their visit to the Shaykh in his home in Abu Dhabi where the Shaykh spoke about the story of Joseph and his reconciliation with his brothers. Rabbi remembered he said to the Shaykh, “I am Joseph, your brother.” Rabbi Lustig invited the Shaykh to the podium with the following words: “We are the only congregation created by an Act of Congress so that all the children of Abraham would be able to have their appropriate voice in this nation’s capital.”

Over 25 religious leaders from around the Washington area, including Cardinal McCarrick, Pastor Bob Roberts, Professor Akbar Ahmed, and Imam Magid were present during the service. Shaykh Hamza Yusuf, the President of Zaytuna Institute, was also a part of the event to translate the words of his teacher bin Bayyah. Shaykh Yusuf, himself a scholar, eloquent speaker, and, as Rabbi Lustig described him, “the west-most, influential, promising, and powerful scholar of Islam, great friend, great teacher,” respectfully stood at the podium throughout the address, and did not say anything other than translating the words of the honorable teacher. What we saw in the way Shaykh Yusuf treated his teacher was a live reenactment of what used to be a teacher-pupil relationship in premodern times, one that acknowledged the true value of knowledge and their respective personal value vis-à-vis the infinite scale of our spiritual journey to the divine; a relationship marked by an appreciation of true knowledge, and in which teachers were not only the vessels of conveying theory, but also the role models of good character traits and virtues. One can manifest this behavior only when he or she has duly digested divine knowledge and made it a part of their nature.

After offering his greetings to Prophet Muhammad, Moses, and Jesus (peace be upon them), Shaykh bin Bayyah said he had not been able to visit a mosque yet during this trip, meaning that he had been to other places of worship to foster what he called the Alliance of Virtue amongst the Abrahamic peoples. Here are some of the highlights from his short speech:

“Despite all the things we are witnessing in our world, animosities and wars, there should always be a voice that calls to peace, even if in times it might sound like a weak voice. We believe that the power of peace is actually stronger than the power of war. A lot of people feel exhausted [by] these conflicts. Can the Abrahamic family once again bring the hope of peace in a conflicted world? The first thing that we are attempting to do is to remove the legitimacy of religion from the advocates of hatred and war. It is not just with our words, but also with our relationships with others, with the love that we show one another, also with sincere friendship and integrity….

“I am not going to conceal from you the fact that there are people out there that don’t want to see people come together, especially the religious leadership coming together for this cause. In many parts of the world, the masses can be divided into two types: the group that is victorious in war, and the other group that feels like they have failed. Neither of them, the victorious and the defeated, like the people that are calling to peace. The defeated group like those who are calling to war, because they are seeking revenge. We are firefighters. We are not asking who started the fire, people can ask that after. But now we are just saying, ‘let’s put out the fire.’…

“It is undeniable there is a lot of oppression in the world. We can’t set that aside. There is no doubt that justice is the foundation of perpetual peace. Despite that we are seeking peace even if it is a temporary peace. We want people just to set their weapons aside. God gave us ability to speak in order to communicate. God spoke to messengers. Our Qur’an says, God spoke to Moses. Speech is actually an instrument for seeking peace. This is the why Plato said the purpose of speech is persuasion, and the purpose of persuasion is to find an alternative to fighting. Our religions, we want them for development, human flourishing, human wellbeing. We don’t want them for destructive devices... Religion is a power, and like all power, it can be used for good or for evil. These people are going to be the peacemakers. They will restore our religious traditions to their first priority, which is the spreading of peace…”

The Shaykh’s words are reminiscent of what Bediuzzaman Said Nursi (d. 1960) said in 1952 to Eşref Edip: “There is a massive fire in front me and its flames are rising high up to the sky. My child is burning inside; my faith is in flames. I am rushing to put out that fire and to save my faith. Who cares if someone wants to intercept me and I trip over? Does this little thing really matter when there is such a wild fire?”

The Shaykh’s trip to Washington was not only to attend this service. During the week he joined a conference with 400 faith leaders to foster ties of interfaith dialogue. Called the “Alliance of Virtue,” the conference “was viewed as a follow-up. In 2016, Muslim scholars and leaders from dozens of Muslim-majority countries met in Morocco to sign the Marrakesh Declaration, which called the oppression of religious minorities contrary to Islam.” Religious leaders signed a broader document, the Washington Declaration, which is an overall call to freedom of speech, religious liberty and tolerance. [1] A dear friend, Rabbi Paul Jacobson from Temple Avodat Shalom in New Jersey participated in the conference and he shares his observations below.

The gathering at the Washington Hebrew Congregation was surely a touching one, filled with prayers and music by Dan Nichols who was accompanied by Jewish and Muslim youth choirs. My friend Sadiq Ansari, a PhD candidate in Islamic studies, was also present during the event, and he explains below what has remained in his heart after the event.

Conclusion: to be healed from our paralysis

Imam al-Busiri wrote Burda when one morning he woke up but could not rise; he was paralyzed and could not move one half of his body. The story goes that Busiri wrote this poem when he was bedridden with pain, and he hoped his praises for the Prophet would please God and he could perhaps be healed. Then one day, he saw the Prophet in his dream. The Prophet covered him with his cloak, and when he woke up he could move. My encounter with this poem was in Senegal in 2013 where I was a participant to an international conference titled “Diversity and Cohesion in a Globalized World: Contributions of the Gülen Movement.” A number of international scholars and leaders had delivered messages of dialogue to over eight hundred participants from thirty different countries in that beautiful country which was once a major port of slave trade, “the door with no return,” as written over the door of slave houses in the Gorée island off the Dakar. Just as I was filled in that conference with hopes that our world could really be saved from its sufferings, I believe efforts like the American Peace Caravan, Sabbath of Peace, Alliance of Virtue, and welcoming each other in each other’s temples should inspire in us hopes for a healing from our current paralysis.

[1] Michelle Boorstein, “How the National Prayer Breakfast sparked an unusual meeting between Muslims and evangelicals,” in The Washington Post, February 8, 2018.