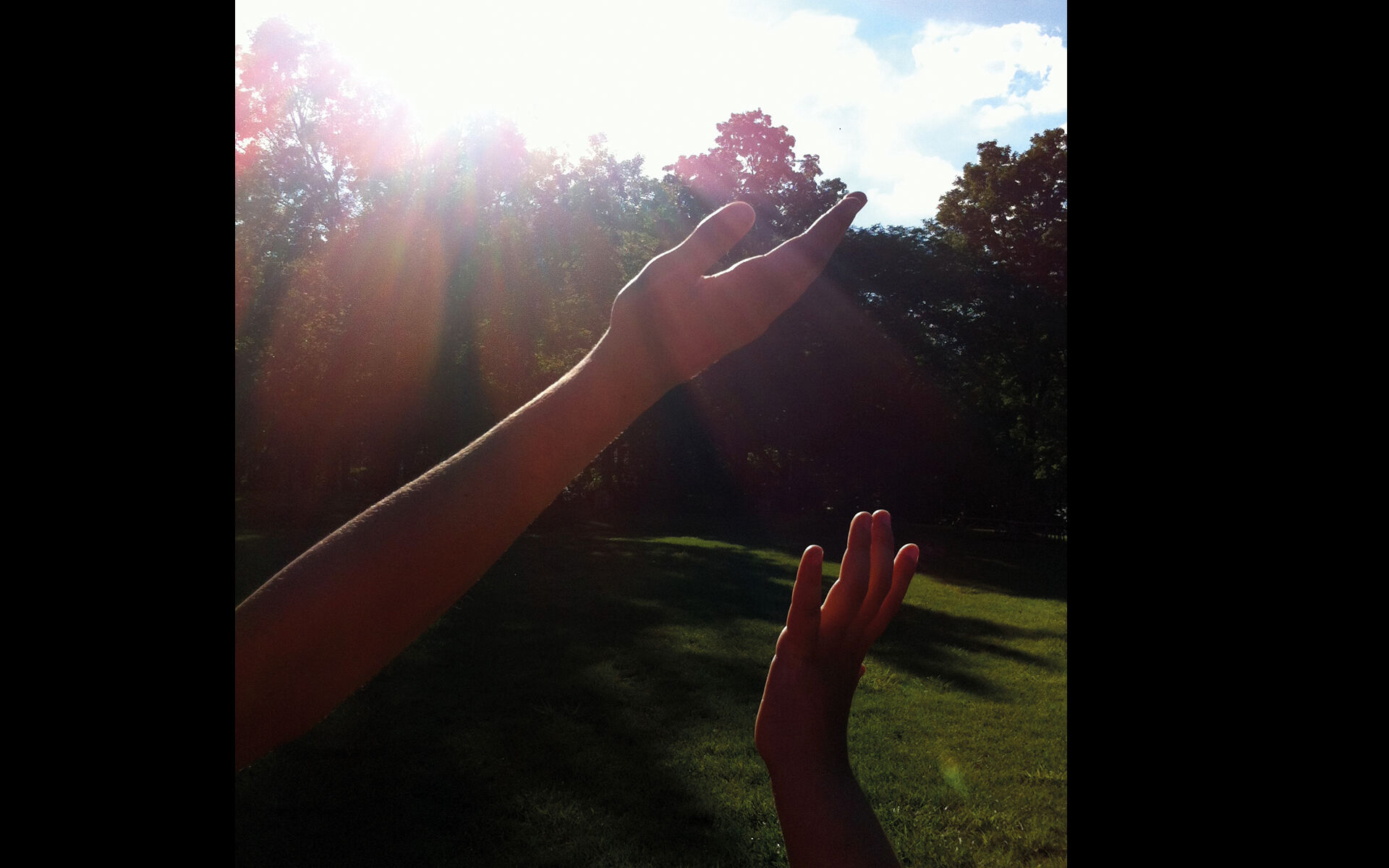 Meaning joy and delight, surur (rejoicing) is a kind of contentment that embraces a person from both within and without. Even though every conscience feels it differently, what is common in the rejoicing felt by everyone of those who rejoice is that breezes of intimacy come from the true Friend at different wavelengths, invading the human inner world.

Lovers of God are made aware of rejoicing with the fragrance of meeting with Him, the loyal with the faithfulness in their hearts, and the heroes of nearness to Him with sentiments of certainty. According to their capacity of perception and feeling, each type of person exclaims, In the grace and bounty of God and in His mercy—in this, then, let them rejoice. This is better than what they may amass (of worldly goods and riches) (10:58). They consider the origin of rejoicing that has arisen in them, and breathe peace and feel exhilaration with the joy of the Divine gifts that come to them.

Belief and all the results it promises, islam (being a Muslim) and all the exalted goals it directs people to, the Qur’an and the fruits with which it is laden pertaining to this and the other worlds, excellence (ihsan) and the vision of God in the Hereafter which it promises—each is a mercy and bounty of God given to persons according to their rank, and the joy and contentment that these gifts rouse in their hearts are the flowers of rejoicing that open in the emerald hills of the heart.

Belief, islam, the Qur’an and ihsan (excellence) are the greatest gifts of God, and the rejoicing that arises from being honored with them, with its inherent suggestion of gratitude and praise, is the greatest of all favors. Such rejoicing exceeds all worldly joys and pleasures and it is worth sacrificing the world and whatever is in it for its sake. It is because of this excellence that the Qur’an proclaims: This is (far) better than what they may amass (of worldly goods and riches).

While the Qur’an condemns any joy which does not arise from some Divinely approved thing and it is not certain what it will bring, it praises the rejoicing that comes from the knowledge of God and Divinity, obedience to the Messenger and the fruit of such behavior, and being a Muslim and the fruit of this. In many verses, the Qur’an states: Let them rejoice (10:58); Rejoicing in what God has granted them (3:170); Feeling exhilaration in what is sent down to you (13:36); For them is the glad tiding (of happiness and triumph) in the present, worldly life and in the Hereafter (10:64); God will give beauty and cheer to their faces and rejoicing in their hearts (76:11), and They will return to their family in rejoicing (84:9). While those feeling a joy which does not arise from anything that has been Divinely approved are threatened with an evil end, the others are offered the pleasure of happiness and exhilaration.

According to the source of the rejoicing and the way in which it is felt, rejoicing can be dealt with in three categories:

The first type of rejoicing is that which is embedded in spiritual pleasure. Such rejoicing is a Divine screen against the fear of falling far from the Ultimate Truth, and of being defeated by the darkness of ignorance of Him, and of the worry of being exposed to loneliness.

The worry of the common believers about remaining distant from the lights of the Ultimate Truth and breaking away from Him shows itself along with the fear of being unable to surmount the difficulties that surround access to Paradise, and the fear of becoming entangled in the bodily appetites that lead to Hell. The fear that the distinguished ones among believers feel about being exposed to loneliness is accompanied by the fear that one may feel no desire for the good, Divinely approved things, and no aversion to sins or immoral behavior. As for those foremost in nearness to God, they fear and worry that their feelings about separation and isolation are accompanied by a hesitation or slowness in choosing between remaining in this world and going to the Hereafter. All of these things cause everybody grief and anxiety to varying degrees. The rejoicing that appears on the horizon of the heart when its arguments have gained precedence becomes a means of exhilaration against this grief.

Whether it is caused by a lack of knowledge of God or is the basis of wrong behavior and rebellion, ignorance causes grief and anxiety to the spirit. To prevent this, the absolute Friend removes the darkness of heresy, misguidance, and denial that sometimes infiltrates into the spirit, with the breezes of rejoicing which He causes to blow in the breasts and illuminate the hearts of His friends with His own Light, making them sources of light as indicated in the Verse of Light (24:35). We can interpret this as the Almighty’s bringing forth those whom He loves into light from the darkness, reviving their hearts with the light of His Knowledge, and making them candidates for eternity. The light-diffusing Divine declarations in the Qur’an point to certain dimensions of this Divine favor. For example: (2:257) God is the Guardian of those who believe, bringing them out from the darkness (of unbelief, heresy, and misguidance) into the light (of belief, islam, and perfect goodness); and (6:122) Is, then, he who was dead (in spirit), and We raised him to life, and set for him a light by which he moves among people without any deviation—is he like the one who is lost in depths of darkness, out of which he cannot get out?

When the spirit falls far off from the pure spiritual realm, which is the true source of the Divine gifts that flow into it, it becomes wretched, feels lonely and isolated, and is dragged towards other paths with different expectations and feels discontent. Yet, as declared in the verse (13:28), Know well that in the remembrance and mention of God do hearts find rest and contentment, a heart which is fed on remembrance and the mention of God can overcome all adversities with the pleasure it has in the rejoicing that God has caused to arise in it.

The second type of rejoicing is that which comes from witnessing God in everything with all His Names and Attributes. Seekers who progress from knowledge to knowledge of God wholly submit their bodily life and free will to the Divine Will by virtue of their obedience, devotion and spiritual connection to God, and their relation with Him from the bottom of their hearts. They rise to a new life by the Lord’s Will; the result of this is that rejoicing appears and the spiritual dimension of their spiritual existence that looks to the other world gains predominance. Even though they fulfil what they should do to obtain a result, their belief in, submission to and reliance on God are a much more powerful resource in their decisions and actions, and they feel events with their peculiarities at wavelengths that belong to the realms beyond. This may be viewed as self-annihilation in God. The author of al-Minhaj (al-Jaza’ri) pictures the deep rejoicing that arises from this state as follows:

A state which proceeds from knowledge of the Unseen;
It is not possible to perceive that knowledge except through pleasure.
Always make efforts so that you can be freed from your own self,
(For acquiring this knowledge is only possible
by becoming free from one’s own self.)
It is incumbent on you to acquire it, if you can pay its price.
Knowledge of the outer dimension of existence
is mixed with clay and muddy water,
while knowledge of its inner dimension (nourished with Divine gifts)
guides the soul and heart.
(Spiritual) knowledge is a hidden treasure which comes to you,
in proportion to how much you can be freed from your own self.

The rejoicing that arises from acceptance by the heavenly realm, which is the third type of rejoicing, removes the feeling of loneliness and isolation from every part of the spirit. It prompts travelers to the Ultimate Truth to witness the Divine Being in His signs and causes them to overflow with the hope of knocking on the door opening to His vision, with their spirit being drown in the joys that pertain to the other world.

At this level of rejoicing, the heart, the spirit, and the other faculties, all turn to the One Who eternally speaks, with a most sincere desire and—as indicated in the saying, If He did not want to give, He would not have given the desire to ask—they are honored with acceptance by the One Who answers and bestows freely.

Seekers who rise to this level are enraptured with the streams of rejoicing in their spirits and begin to feel the breezes of His intimacy blowing from the Realm of the Holy Presence (al-Hadirat al-Quds). They feel as if they were at the threshold of the pure Realm of the Transcendental Manifestation of Divine Mercy and the Realm of the Transcendental Manifestation of Divine Attributes and Names (alam al-jabarut and malakut), and overflow with a deepest desire and excitement to knock on the door that opens to His vision. It is as if they have been turned into pure spirits, becoming quite intoxicated with what they see and hear beyond all concepts of modality, and smiling at all those favors by the Grace of God.

O God! Include us among those whose faces are bright (with the vision of You), and who are looking toward Your Holy Face. And bestow blessings and peace on Muhammad, on him be the most perfect of blessings and salutations, and on his brothers among the Prophets and Messengers, and on all the members of his Family.