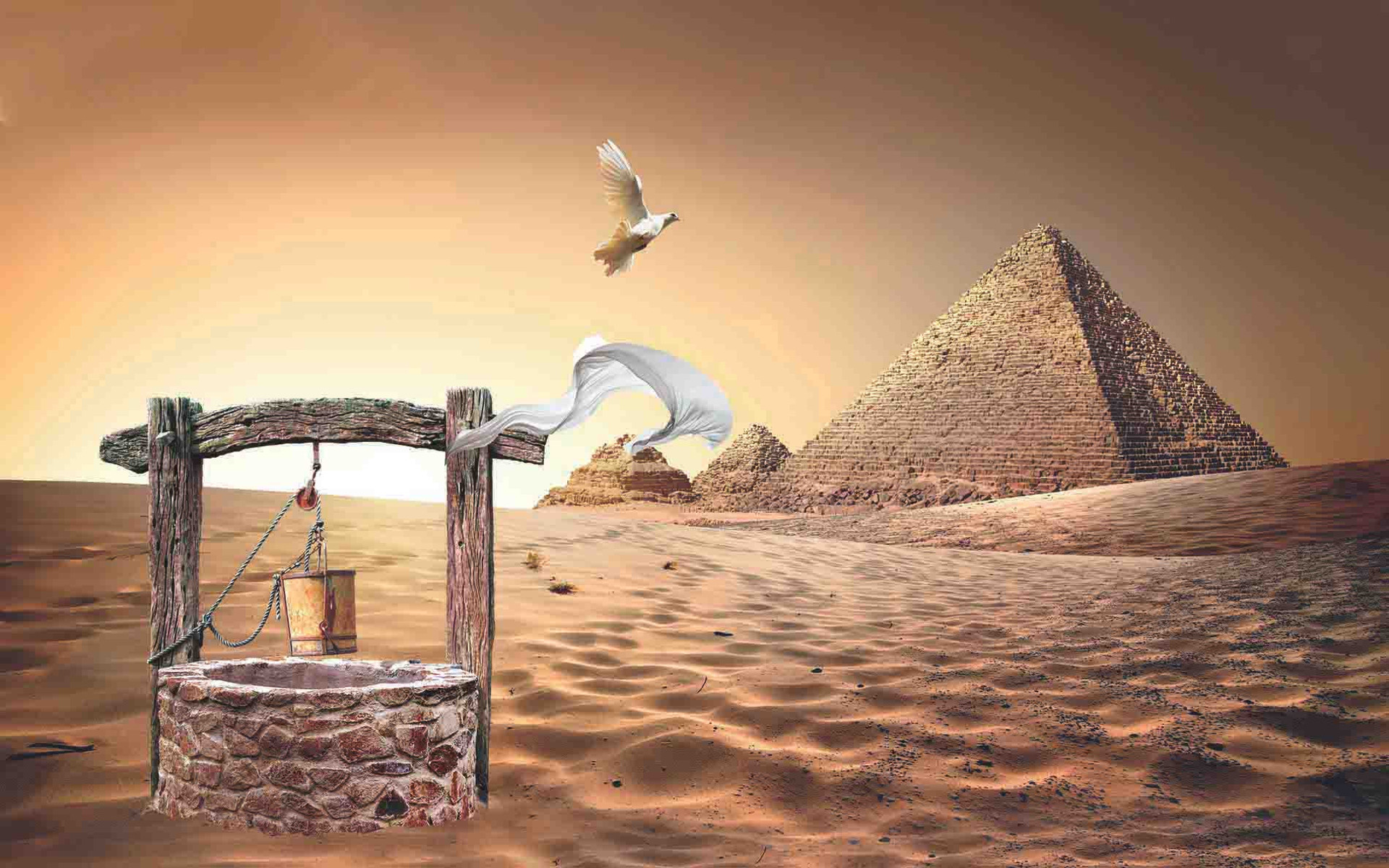 Isn’t it strange, but also vividly true, that sunk in the deepest agony, some people lose their faith in God, the absolute sustainer? And yet others do exactly the same at the height of utmost pleasure. They forget that God is the sole provider. Either way, this entrenches the “in medio stat virtus” universal rule, which means virtue stands in the middle. This is what constitutes the dividing line between man’s meaningful living module (modus vivendi) for the Hereafter and the mistaken lifestyle “causing people to claim absolute independence and ownership of their self … leading one to imagine a realm of personal dominion,” as observed by Said Nursi in The Fourth Treatise in The Seedbed of the Light (pg 87).

Linking the initial paradox and Said Nursi’s soul searching words, brings to light one of the most interesting and captivating stories to appear in both the Bible and the Quran. This is none other than the story of Joseph – blessings and peace be upon him—and his brothers. Their riveting story cuts across humanity as it paints an almost unimaginable life of someone who never parted ways with His Creator – come rain when he was a slave and come shine when he was leading a palace life.

While the Quran devotes a whole chapter (Surah 12 Joseph) and 111 verses to Joseph’s story with his brothers, the Bible tells it in 13 Chapters (37-50) and a total of 395 verses in Section Four of the Book of Genesis.

The story begins with Joseph, as the last child in the family of Jacob, born of Isaac, the son of Abraham, living in Moses’ promised land of Canaan (blessings and peace be upon them). Joseph draws envy from his brothers because of the special treatment he receives from his father, exemplified by a special dress.

His brothers also disprove of his chain of dreams, which they believe is Joseph assuming leadership; one particular dream sends chills even down his father’s spine. He talks of seeing, “the sun, moon and eleven stars bowing before him.” His brothers’ envy rages, but his father keeps this to his heart.

Lesson One: Did Jacob discriminate against his children? Very unlikely. As a prophet, he must have noticed something special in Joseph’s destiny and thus exercised extra caution to ensure the delivery of a sound and wise judgment. In the world of journalism, it is said “when in doubt, leave out.” In matters of faith in God, we ought to do what is expected of us while exercising enduring patience. No complaints. We must have pure sincerity and clean intentions.

Lesson Two: What is in a dream? In dreams, all our five senses are virtually non-functioning. The dream drive – borrowing from the IT language – is external. That is why we travel distances above the speed of light from our bed pillows, as a friend told me.

At the same time, we cannot rule out cases of Divine warning about what is coming or ought to be done. Examples abound in the scriptures. In parts of Africa, dreams were originally taken for communication between gods and human beings, whereby the former made their wishes known. But an interpreter had to be there.

Lesson Three: Joseph’s brothers’ envy derives from prejudice, which is a vice to be fought against; it led them to treat their young brother unfairly. First they plot to kill him. Then they settle for dipping him into a waterless well and finally sell him to a caravan of Egyptian merchants, who resell him to Pharaoh's Chief Steward Potiphar. He starts a slave’s life.

The brothers take his garment and soak it in goat blood. They send it to their father claiming to have bumped into it. Jacob laments. He goes into mourning. His children come to express their empathy. He takes no heed and keeps on mourning.

Through God’s providence, Joseph wins the trust of his “master” and is made steward of his household. He resists the temptation of his master’s wife. He chooses jail to breaking God’s and his master’s trust.

Again, he builds trust: the warden places him in charge of prisoners. There, he meets Pharaoh’s chief baker and cup-bearer. He interprets their dreams: the baker was going to hanged and the latter would be reinstated to his job as the Pharaoh’s cup-bearer.

Pharaoh himself is troubled by dreams. Egyptian interpreters fail to deliver. The cup-bearer remembers Joseph, who is called and manages to decipher Pharaoh’s dreams into seven years of good harvest and seven of famine on its heels. Joseph is made Pharaoh’s Chancellor. He helps the country store its food. When famine strikes, many people, including his brothers, come to Egypt for food supplies. He notices them. He sells food to them and orders their money stuffed back into their bags. He asks them to come back with their young brother as a condition for getting further supplies and orders one of them to remain behind as a surety.

Lesson Five: God never guides unbecoming behavior (Quran 12:52). For every holder of knowledge, there is (always) One more knowledgeable: the All-Knowing (Quran 12:76).

From all that has taken place in the fate of Joseph, it becomes evident that Destiny wills good for the believer. Although he was a slave at the palace, Joseph (blessings and peace be upon him) rejects the invitation of the noble, rich, and beautiful woman. He willingly prefers prison to committing sin.

Lesson Six: After introducing himself to them, his brothers start to feel guilty, which is the start of the process of reconciliation.

Lesson Seven: When hunger strikes again, Jacob releases Benjamin and orders the collection of an assortment of gifts and the return of the money which was stuffed back into their bags. He prays for God’s protection.  Upon arrival in Egypt, they are received but have to undergo another session of questioning.

After Joseph ascertains the presence of Benjamin, he is overwhelmed and takes a short leave. He sheds tears, washes his face, and returns. A grand reception is held.

Joseph orders bags stuffed to everybody’s carrying capacity. He orders to secretly place his special cup in the bag of the youngest, Benjamin. After they left, Joseph summons the supervisor and orders him: “Stop those people and ask them why they have returned bad for good?”

They deny any knowledge, let alone involvement in such unbecoming behavior. They pledge their innocence and that whoever would be found with the cup should face death, while they are ready to remain slaves forever. The supervisor differs with them. The one on whom the cup is be found will remain behind while the rest will be allowed to leave.

Benjamin turns out to be the culprit. In disbelief they tear their clothes and mount their donkeys back to town. Down on their knees, the entire entourage goes to Joseph’s residence.

He asks them: “What is this you have done? Don’t you think a person like me can prophesy?

“The one to whom the cup was traced becomes my slave. The rest can return to your father in peace.”

“My Lord”, says Yuda, “may your anger not befall on your servant because indeed you are like the Pharaoh!” He goes on to narrate conditions under which Jacob may release Benjamin, listing the fatal family consequences of detaining him in Egypt.

Joseph is touched by the plea of Yuda. He loses control of himself. He orders the removal of all people. He tells his brothers: “I am Joseph. Is my father still alive?” They fail to answer. They are astonished.

He goes on to tell them: “Come near me.” They move closer.  He adds: “I am Joseph, your brother whom you sold to be taken to Egypt. But don’t grieve now. Nor feel bad because you sold me to be brought here, because God placed me ahead of you to save your lives. Quickly go up to my father and tell him. Your son Joseph says: ‘God has made me the Lord of the entirety of Egypt. Come down without delay. You will settle in the land of Goshen near me; you and your children, grandchildren, sheep, cows and whatever you possess.’”

Lesson Eight:  The entire story is one of affection and portrays the qualities of being keen, pure, and having sincere feeling with no ulterior motives and without seeking any return. Said Nursi puts it better in the 23rd Letter (2:86-87), where he points out that the story encourages us to strive for the other side of the grave where we will find real happiness and pleasure. It also shows Joseph’s exalted truthfulness and announces that even the most joyful and brightest conditions of the worldly life could not captivate him; rather it led him to ask for death and the other life.

Lesson Nine: Via Jacob’s life, we learn that for believers who follow God’s ways without deviation and with pure intention, when things start to worsen, this means the happy end is approaching. The dawn of light is the end of darkness.

Note: The story of Prophet Joseph, peace be upon him, is narrated with some differences in both the Bible and the Qur’an. The author quotes from both sources in this essay.