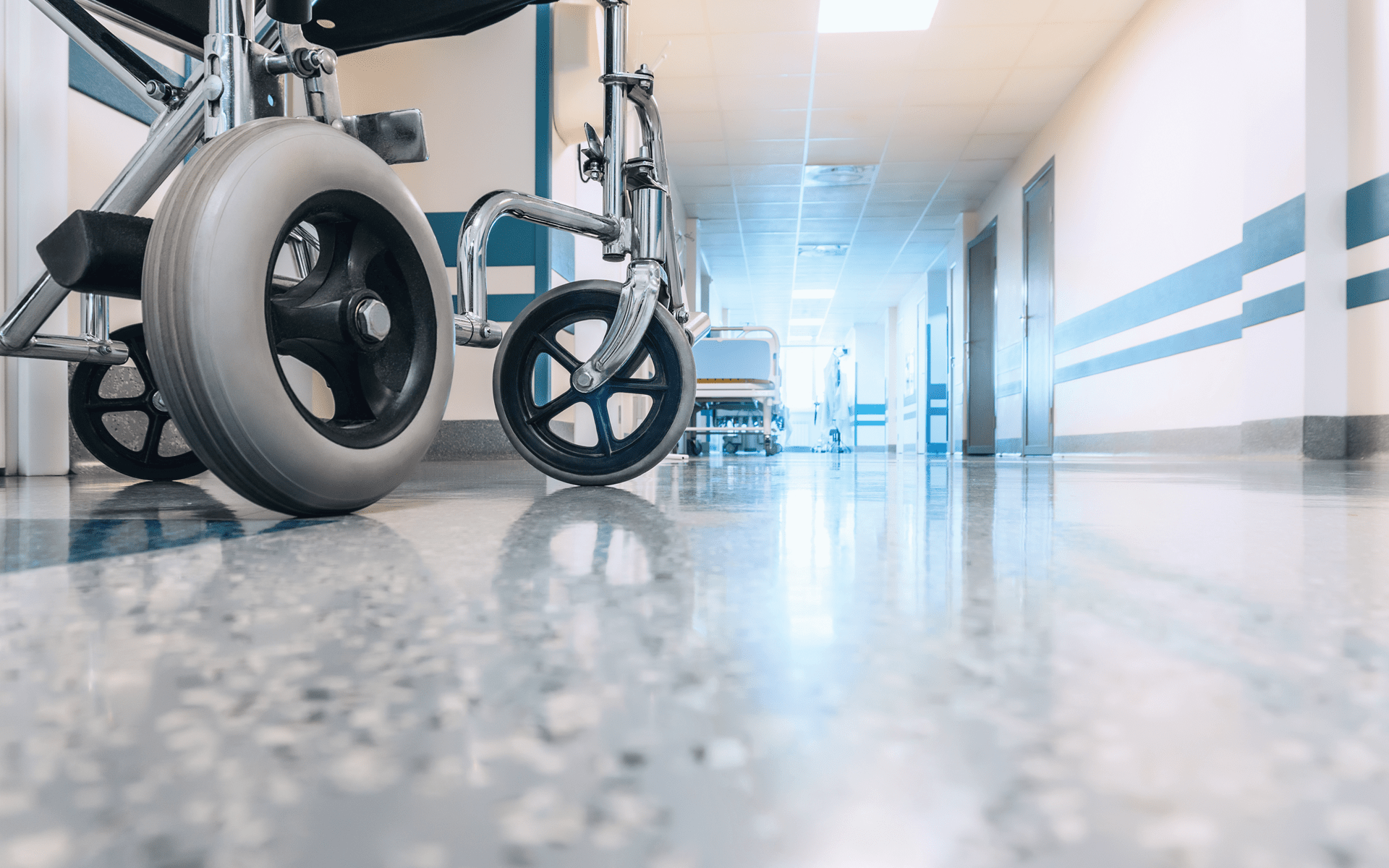 As I wheeled Chris off the elevator, he was quieter than the day before, definitely not in the mood for pranks.  He didn’t complain—my husband never complained—yet he clearly wasn’t feeling as well.

Two steps forward, one step back: that still qualified as progress.

Rolling through the hospital hallways, following signs for Radiology, we passed several women wearing nasal cannulas and pulling oxygen-cylinder carts.  The sight wasn’t remarkable in that the National Institutes of Health runs clinical trials on virtually every ailment—from the common to the rare, the treatable to the terminal. What was surprising was seeing a cohort of patients similarly afflicted, all female and relatively young.

At least they were ambulatory.  When Chris’s doctor ordered a scan this morning, his nurse ordered a wheelchair.

During his first few days after readmission, Chris’s condition fell somewhere between depleted and God-awful depending on the degree of his sawtoothing fever.  As his treatments—withdrawal of anti-rejection meds included—began to take effect, however, I’d sometimes arrive to find him sitting up in bed, looking comfortable and alert, like a patient soon to be released.

Towards the end of the week, his humor kicked in.  After opening a colleague’s get-well card to find a droll reference to their firm’s new management—a buyout of the Rouse Company was but two weeks away—Chris reached for the bedside phone.  When a recording advised him to leave a message, he deepened his voice and pretended to be the CEO.  “This is John B—,” he said gruffly.  “It’s come to my attention that you have a poor attitude about the merger.”

To me, the spoof was proof of recovery.  To his friend, who didn’t recognize Chris in disguise, it was cause to call the head of security: Someone was impersonating the chief executive.

Come Friday, Chris remained frail despite signs of improvement.  His nurse took me up on my offer to drive him to his appointment.

In the Radiology waiting room, we found two more women on oxygen therapy.  After positioning Chris at the end of a row of seats, I took the one beside him.  If silence had been a preference en route, now it was a prescription.  No one spoke or made eye contact.  No one leafed through magazines, for there were none.  No one asked the time or glanced at their watch.  It was as if chronic illness had instilled a monkish composure.  Or torpor.

I was the only non-patient in the room, the Lucky One.  As the others sat alone with their thoughts, I wondered what those might be.  That three back-to-back tests followed?  That with sick leave exhausted, the boss had to be told?  That scrambled eggs might stay down?  That last time the shadow had shrunk, so this time, well, don’t get too hopeful?

Or were they trying to avoid thinking, instead imagining doing something—anything—more agreeable?  Strolling through the hill town of Assisi.  Watching a Coen brothers film.  Defending an IRS audit.

One of the women on oxygen finally had enough.  Silence wasn’t a chance to grab a shot of mindfulness; silence was a looming endgame.  By talking, she could ward off quietus.  But she needed a partner.

“What brings you here?” she asked me, in a tone so warm and genuine that she might have been a greeter in a small-town visitors bureau.

She looked about forty, or a little older, but it was hard to tell; illness can age a person faster than a Broadway makeup artist.  Although her appearance was middling in every respect—from her height and build to her facial features and shade of brown hair—her spirit was striking.  Whether the vivacity was innate or cultivated for survival, she offered me what she desperately needed: a deep breath of fresh air.

“My husband needs an X-ray.”  I glanced at Chris.  He showed no sign of wanting to engage.  Under the circumstances, it felt unfriendly, even hurtful, to not offer more.  “He had a kidney transplant a few months ago,” I added.  “Now he has mono.”

Immediately, another patient stood and left.  Perhaps she went to the restroom, or realized she’d left her purse in the car.  More likely, mononucleosis spooked her—even though it’s not an airborne infection.

I paused, realizing that my interlocutor might want to leave, too.  She didn’t budge.  “How about you?” I asked.  In deference to patient privacy, I avoided the politeness of trading names.

“I need a double-lung transplant. There’s a group of us here who have the same disease.  We get together every year.”  She chuckled.  “It’s like a reunion!”

Lymphangioleiomyomatosis, or LAM, is a rare condition that primarily affects women ages twenty to forty.  Abnormal cells invade the lungs, as well as lymph nodes and kidneys, leading to reduced pulmonary function and respiratory failure.  Treatments, including transplantation, can enhance the quality and duration of life but the disease is incurable.  After diagnosis, life expectancy is usually ten to twenty years.[1]

Her disclosure was stunning.  Not long ago, I wouldn’t have grasped the challenges she faced, merely to delay the inevitable.  No longer.

One day she would lie in an OR, as we recently had.  But unlike Chris, whose kidneys were allowed to fail in place, with one of mine nested beneath them, she would have both lungs removed to accommodate her grafts.  No matter how damaged and inadequate, those lungs were infusing her blood with oxygen, ridding it of carbon dioxide, maintaining life.  Temporarily, she might require a heart-lung machine and a ventilator; ultimately, she’d either breathe though the new air sacs or wouldn’t . . . breathe.  If her grafts failed, there was no recourse like dialysis to sustain her.

In short, she would perform a death-defying, net-free launch from a trapeze with no turning back once she let go of the fly bar.  Her odds of surviving even five years after transplantation were not much better than one in two.[2]

And that was if she got lucky.  With the chronic shortage of deceased-donor organs, lungs might not become available in time.  Although living donation was possible, she’d need two Good Samaritans, each providing the lower lobe of a lung.⁠  They’d face a riskier surgery and longer recovery than kidney donors, which meant friends and relatives were less likely to volunteer.

A radiology assistant called Chris’s name.  Together, they disappeared through a door leading to the imaging machines.  Moments later, the woman was called, as well.

She’d shared no details about her personal life.  She’d only spoken of her illness, which, understandably, had come to define her—from what lung-healthy products she could buy to how she should dress, walk, or perform daily chores, such as unpacking groceries, to minimize exertion.  If she seemed compelled to tell me she had LAM, it was not because she sought sympathy; she struck me as someone devoid of self-pity.  What she wanted was to be heard.  To be heard is to be remembered.

In no time, Chris was back and we were retracing our route through the cold fluorescence of the corridors.  As we entered an empty elevator, he said, “You shouldn’t have mentioned I have mono.”

“You saw the woman leave.”

I hadn’t meant to embarrass him.  For that I was sorry.  But I was as disappointed in him as he was in me.  Chris was still “chesting” his health cards, as if this were a hand of bridge, with nothing but his pride at stake.

No doubt a gender difference was at work, a primal XY-chromosome trait, which he’d exhibited many times before: Never show weakness lest a contender seize the advantage—be that your mate, your kill, or your year-end bonus.  According to such logic, illness fell between failing and fatal flaw.

A strategy suitable for the savanna or a boardroom, however, is counterproductive in a medical setting where any debility you don’t reveal is one that isn’t treated. The woman I’d just met understood the importance of communication, on every front, regarding her health.  I was sorry that my husband didn’t.

Counting blessings was my luxury, not Chris’s.  Sick as hell, he was entitled to feel however he felt, unthankful included, with no obligation to parse his advantages relative to others.

Later that night, Chris’s doctor called me at home.  He’d had Chris moved to intensive care.  He spoke so calmly and matter-of-factly that I didn’t panic.  In fact, the thought never occurred to me that every “at least” would soon count for nothing.