The Art of Ebru: Seeking Serenity on the Surface of the Water 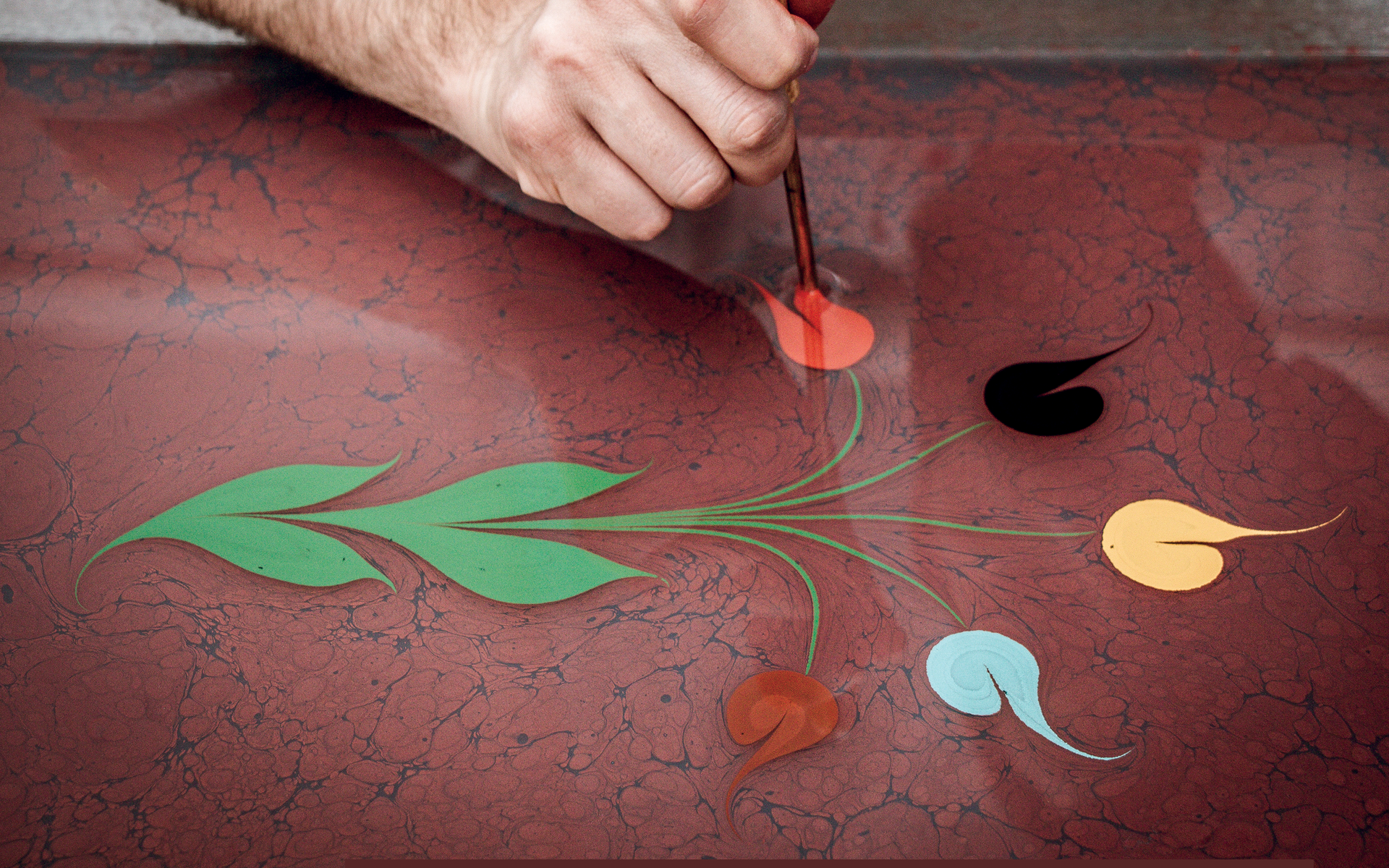 Ebru, the art of crafting images and pictures with special paints on the surface of water, originated on the continent of Asia, spread to Anatolia, and from there to the rest of the world. Ebru has long been the name given to the original Turkish art of “paper marbling” [1].

Enchanted by their interaction with water, human beings started practicing the art of paper marbling. By practicing Ebru, one may interpret the time on the marbling tray as a sort of time travel in which the wiggles of the water take a journey between the past and the future.

For ages, people have been using long-lasting rock surfaces to transfer information to future generations. These artworks and writings are reminders of past civilizations and they have always gained the attention of mankind around the world.

Some natural ingredients for traditional Ebru art include rose branches, dust paint, bile juice, and gum from a wild licorice plant. This natural combination of each ingredient of Ebru art ensures its uniqueness.

Each careful sprinkle of a color on the surface of the water is the reflection of the emotions that are felt by the artist yet are difficult to express otherwise.

Ebru is a delicate reflection of a civilization in which water is exalted as glorious and precious. It is one of the major elements of our world, that are essential for existence, along with soil, air, and fire. Ebru is the art of enthusiasm presented with sincere feelings.

Ebru gives a new perspective to the world of art and to cultures that are not familiar with it, since the concept of water serving as a base might initially seem impossible.  Throughout history, eastern and western civilizations were established around sources of water. Water in fact attracts human beings to its vibrancy like a magnet. It is the source of life for all the people from different ethnic groups, colors, languages, and religions. The mosaic appearance of Ebru art reflects human diversity in its tank with harmony and coherence [2].

In the past, people used to write thing they didn’t want to remember on water. Anything is doomed to disappear on the surface of water other than Ebru.

Using water as a medium is paradoxical because water signifies change as opposed to permanence. However, embroidery on the surface of the water is not something to be planned beforehand but rather an art form that the Ebru performer comes up with at the moment. A single stroke can be transformed but not reversed.

Once the artist has reflected his or her soul’s shape, and the colors have taken their place, the paper is gently laid on the water.

Ebru is like life itself; even if we think we do the same things every day, every moment differs from the others and is unique in its own way.

“O eye, do not sprinkle tears into my heart’s fierce fire, for there will be no way you can put out such a fire.
Is the revolving sky’s color the color of water? Or is it my tears that cover up the sky, I cannot know.”

Those who are interested in the art of Ebru and put their hearts into it will connect with a feeling of spiritual serenity and tranquility. Life in contemporary times is a never-ending wave of turmoil. Those who want to escape the hustle of the routines of life will never be rejected and will be welcomed to the ambiance of serenity by the peaceful waves of Ebru.

It takes people from their own world and brings them to another world of imagination where they can reflect on their feelings and get rid of the negative emotions within them.

For those who are stuck in the modern cycle of never-ending tasks, it is a way for them to reach a peaceful state of mind and relax.

Ebru art might take the artist back to their childhood when they used to play with dirt and mud. Perhaps the lack of preserving their childhood feelings can be remedied.

Ebru craftsmen use the biz, a tool used like a pencil to write on the surface of the water. In Ebru, every move on the water gives color patterns.

The art of Ebru in such a small container can take a human to anywhere that they wish to be or can be a canvas for any image that they wish for, such as a garden of flowers or a limitless sky. It will be anywhere other than any negative emotions inside.

Ebru art eventually makes the performer, as well as those that enjoy it, joyful once it is placed onto the wall of a house or at work and is thus able to begin emanating its bliss.

* This article was based on the speech given by Mualla Yazici in the Fountain Talks meeting at Fishers Public Library, Indiana.