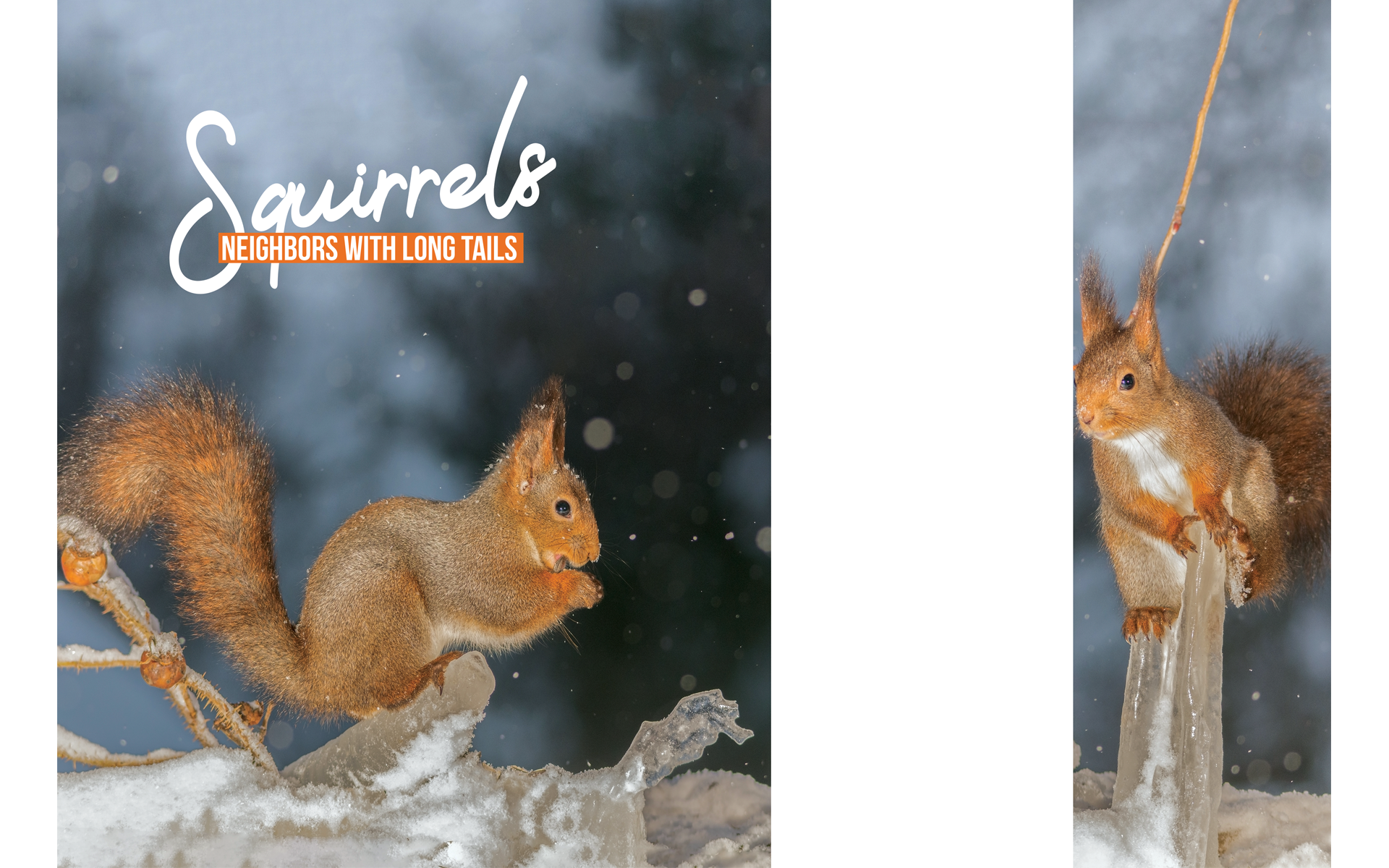 As ordinary as they look, squirrels are in fact wondrous creatures and their tail is exceptionally useful.

Plenty of animals have distinctive features, such as an elephant’s trunk or a kangaroo’s pouch. It is certainly the tail for squirrels.

Watching the spry movements of a scurry of little squirrels seemingly in defiance of their enormous tails, one realizes that this tail, which could get bigger than the animal’s whole body, was created as a balancing and parachuting organ. Squirrels are all around us, but most of us do not know much about these playful animals.

Squirrels belong to the family Sciuridae, with 278 known species. They have a length of 34-43 cm from the top of the head to the end of the tail and a weight of 250-350 gr. Its furry tail is 14-20 cm long. Having a pregnancy period of 30-40 days, these mammals can give birth to three to seven pups at a time and produce young once or twice a year. They live seven years on average.

Living almost everywhere on earth, squirrels inhabit forests and wooded areas.  They do not hibernate but only sleep a lot during extremely cold winter days.

Experts at climbing and jumping, squirrels spend virtually all their time in trees. They can climb up trees very fast and climb down headfirst.  They build nests in the forks of branches or spherical dens in the cavities made by woodpeckers. Unlike bird nests, the entrances of squirrel nests, or drays, are at the bottom. To protect the pups from predators, the mother covers the entrance of the dray with grass when she goes out. Squirrels make several nests in an area and furnish them with grass, leaves, or moss.

Squirrels feed on nuts, almonds, walnuts, fungi, acorns, fresh bark, insects, baby birds, and snails. To avoid food shortages on cold winter days, they bury seeds and nuts as a precaution, which is a very wise action. Squirrels cannot sometimes find the seeds they bury. Yet, seeds are not wasted; squirrels’ forgetfulness result in another form of life, as seeds develop and blossom into new trees. Squirrels also have a powerful immune system that can protect them against many poisons. The creatures are created to withstand even the yew, which carries twenty different poisons.

The tail: an organ of precision

Thanks to their tail, squirrels can rarely be hunted, which makes them one of the greatest survivors in the world. If a squirrel is attacked by a reptile such as a snake, its blood pressure rises dramatically. The blood floods into the vessels in the tail and enlarges it. The infrared radiation emitted by the warm blood in the tail makes the furry long tail look like a much larger animal for the predator. The infra-red sensors on the heads of snakes are fine-tuned to the body temperature of animals. The expansion of the tail vessels also helps when the squirrel is attacked by a hawk or a weasel.

A predator can hardly harm squirrels as long as there are trees and food in its habitat. They are extremely alert to any danger. The position of their eyes in the skull allows them to see every angle and to compute the distance between trees and branches for a safe jump. As they keep jumping, they put all four claws to use, allowing them to land safely on the next branch.

As squirrels jump between tree branches, they do not change direction mid-air, which is made possible by their long tails. Squirrels can also use their tails as de facto wings, allowing them to fly considerable distances up to five meters. If scaled to human proportions, the jumping distance of a squirrel would be equal to 36 meters. Their tails which function like a parachute make it an easy flight for squirrels to jump from one branch to another at the top of tall trees and prevent hard landings even from a fall of up to 20 meters. They are also light, and their rear legs are as flexible as a steel spring.

Pine martens, wildcats, weasels, and raptors are the enemies of squirrels. The agility of squirrels allows them to evade even the fastest birds of prey like the hawk, which gets distracted because of the squirrel’s erratic movements and quits the chase. There have also been instances when weasels fall from trees when hunting squirrels.