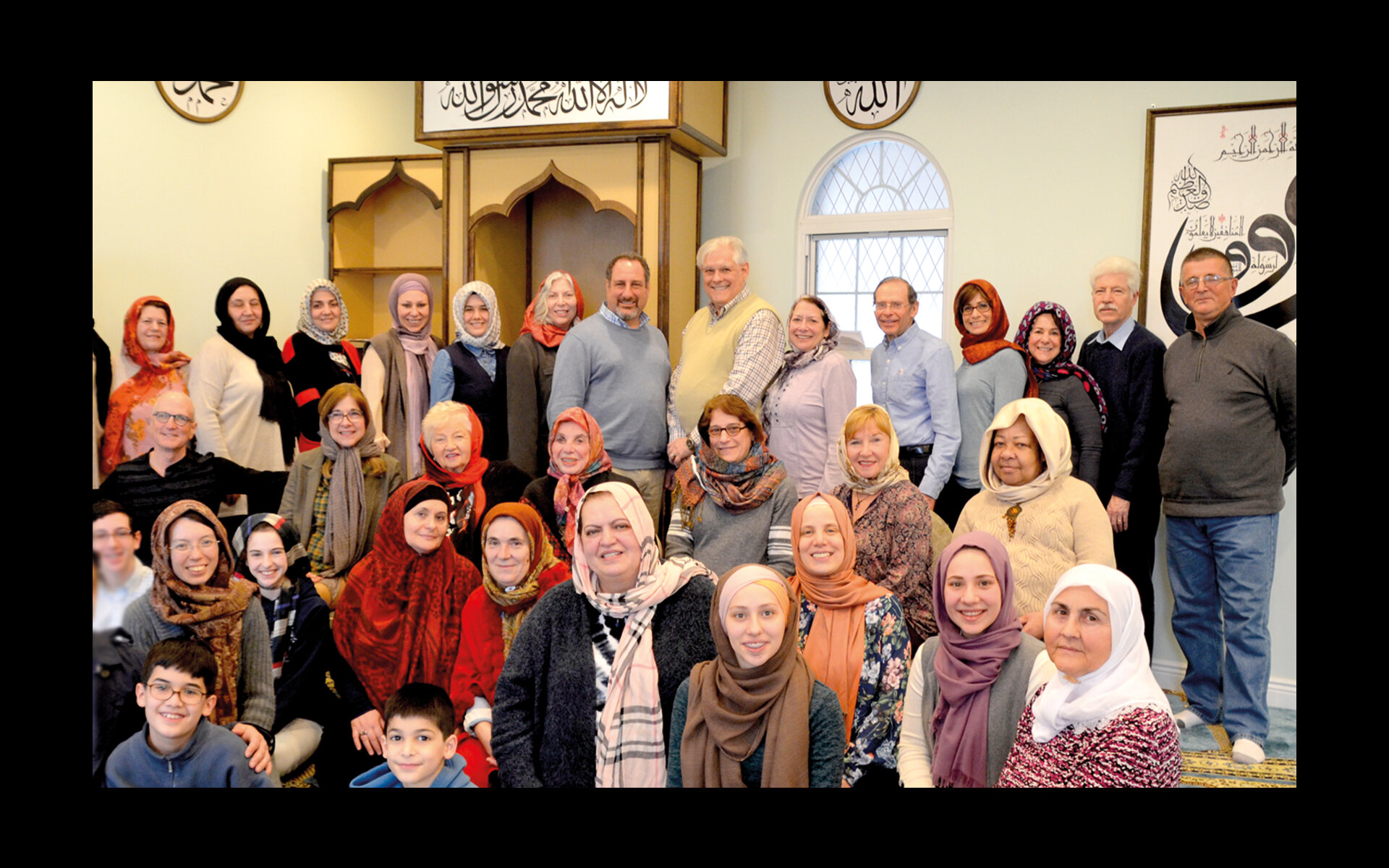 December 2, 2015.  A mass shooting in San Bernardino, California, following a devastating attack in Paris, France. Anti-Muslim rhetoric mushrooms, but how can I, one person, respond?

December 6, 2015.  A hastily arranged interfaith service at Temple Beth Or, Washington Township, New Jersey, is attended by an overflow crowd of almost 400 people. The clergy, representing 18 congregations of the three Abrahamic faiths, walk to their seats as the Woodie Guthrie song, “This Land Is Your Land” is sung. The service gets underway with a call to prayer by a member of the Elzahara Islamic Center of Midland Park, New Jersey, and continues with additional prayers from each of the clergy. One priest from a Catholic Church in Ridgewood, New Jersey, ascends to the podium and asks everyone to take 15 minutes, introduce themselves to someone they don’t know, and “Pass the Peace.”  This 15-minute interval turns into a seminal moment for me as “the other” that surrounds me becomes “the individual” – the mother, the student, the neighbor, each concerned about the same issues as I am.

This evening had a profound impact on me, and I still think of it often. It spurred me to approach my Jewish synagogue community and invite them to engage in an outreach program with representatives of the Muslim community. I had no illusions that this would solve the world’s problems, but I hoped it might be a spark to lift a veil in my tiny little corner of New Jersey. And thus began an ongoing journey to take the hand of our Muslim neighbors and turn the unknown and the different into the familiar and the friendly.

Over the ensuing years we have gathered together for various programs. We started with a Friendship Circle to introduce ourselves to one another, watched a documentary movie, BESA – The Promise, and subsequently The Turkish Passport, and discussed what we saw and heard. We invited our Muslim friends to participate in some of our synagogue services, some interfaith and some not. During one Sunday morning Minyan service, two central Jewish life cycle events took place – a baby naming for a newborn girl, and a 13-year-old leading the service one week before his Bar Mitzvah. Questions were casually asked and answered over our bagel breakfast (accompanied by both rugalach and baklava!).  This turned into a tour of our sanctuary, led by our Rabbi and accompanied by a number of congregants.  The Rabbi took the Torah scroll from the ark so it could be seen up close by everyone. She opened it and chanted that week’s Torah portion, which just happened to be about Hagar and Ishmael! The Rabbi along with our members explained the meaning of the various symbols around the sanctuary – how our prayer books are in both Hebrew and English, what the threads and knots (tzizit) of our prayer shawls represent, why only some of our memorial board lights were lit, etc.  The otherness melted away as we engaged one another in vibrant conversation and dialogue.

One of the most moving interactions we experienced was when one of our members, a child survivor of Auschwitz and a longtime Hebrew school teacher, told her emotional story to a Muslim teen group, which left everyone with tears in their eyes. This included a question and answer session that touched everyone who participated. Our membership was invited to an Iftar dinner that year, during which we came to understand the purpose and meaning of the daytime fasting. We were recently invited to visit a local mosque, which was the first time any of us had stepped inside one. We had so many questions, and they were answered beautifully and passionately. We all sat, shoeless, in a circle, and those of us who are Jewish nodded our heads as the number of parallels between our faith practices became apparent. During Ramadan this year, our synagogue hosted an Iftar dinner. Kosher food was graciously brought into our kitchen, and three very dedicated Muslim volunteers spent several hours preparing traditional recipes for our dinner as we chatted and enjoyed each other’s company.

One by one by one, foundational connections have been made between our Jewish congregants and our Muslims friends. We have learned so much about one another: we have talked about our families, showed each other pictures of our children’s weddings, shared our families’ immigration experiences, exchanged phone numbers, and promised to see each other again soon.

The world is a complicated place, and there are no easy answers to the issues that confront us. But we each have the power to step outside our comfort zone, and just decide to take that first leap of faith.  The opportunities to engage with one another in a meaningful way are all around us, and the rewards far outweigh the effort. Not only do we reap the benefits ourselves, but we have the potential opportunity to “pay it forward” by sharing our stories of these meaningful and memorable interactions, and maybe, just maybe, inspiring someone else to do the same!

As Jews, one of our overriding objectives is to participate in what is called “Tikkun Olam – Repairing the World.” This implies that while the world is inherently good, there is always room for us to improve it, and I would like to believe that I have contributed, in whatever small way, towards that end. In a world that undoubtedly is in need of a great deal of repair, please join in by taking that first small step alongside me and let us walk together.