Sea Snail’s Teeth: Are They the Strongest Biomaterials in the World?

Sea Snail’s Teeth: Are They the Strongest Biomaterials in the World?

The teeth of a tiny mollusk (Patella vulgata), which is a species of sea snails, have been found to be some of the strongest biomaterials in the world. Also known as limpets, these mollusks are a very small crustacean, often around 0.05-2 cm in size with a large cone shell and possess an incredibly complex system of teeth that dazzles the mind. 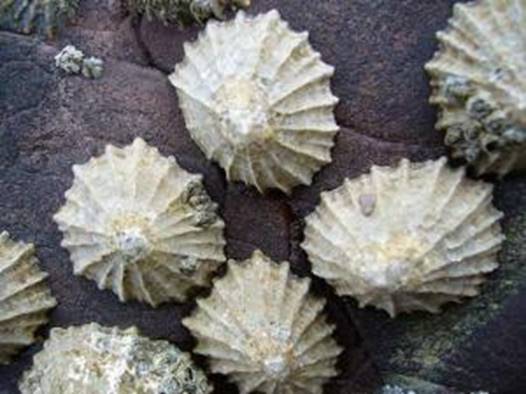 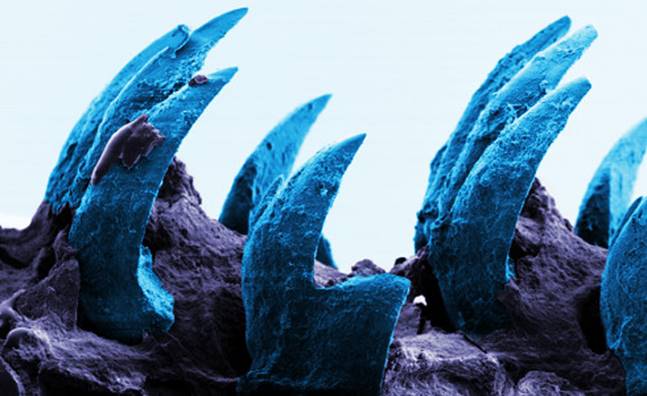 Research has revealed that the tensile strength of the sea snail’s teeth is higher than that of spider silk and is comparable to only the strongest commercial carbon fibers. It was found that the teeth of sea snails scraping algae off of rocks showed a tensile strength between 3 and 6.5 GPa (gigapascals). Spider silk roughly reaches a tensile strength of about only 1.3 Gpa. Scientists say that the snail’s teeth can even withstand the pressure that turns carbon into diamonds. Studies have determined that, to our current knowledge, there is no other material of this size (roughly 100 μm micrometers) with as much strength and durability.

This exceptional durability has led scientists to do research on the structure and functioning of these teeth, and the studies showed fascinating results.

The role of teeth in nutrition

Sea snails have a special tongue, called a radula, which they use to scrape off food from rocks. The most important feature of the radula is that it contains more than 100 rows of iron-mineral teeth. However, those used for food intake consist of only 10 rows on the outermost part of the teeth. During eating, a tremendous mechanism operates: the teeth are constantly repositioned according to their conditions of maturation and wear. Worn teeth are replaced by newly matured teeth over the course of 12 to 48 hours to ensure that fresh, sharp teeth are used instead of dulled ones.

This wonderful displacement system operates in a similar way to the movement mechanism on a conveyor belt where the teeth begin to grow primarily in the posterior part of the radula. Meanwhile, they are strengthened and matured by iron mineralization. When this mineralization is complete, they are moved towards the front of the radula. In this way, completely matured teeth are permanently retained at the far-front scraping area. During the scraping process, the matured teeth wear out at a rate equal to the growth rate. In the meantime, a new set of teeth begins to grow. By means of this magnificent cycle, new teeth are constantly created and matured so that there are no disruptions in nutrition.

The structure of the sea snail’s teeth is also a masterpiece of material science. The dazzling durability of its structure provides optimum strength when scraping food off of rock surfaces.

Although the exact process of biomineralization of the teeth is not known, it is believed that it involves reactions of dissolution and re-precipitation. When the non-mineralized matrix is examined, well-arranged and densely packed chitin fibers are observed that are only a few nanometers apart. The matrix is a structure which keeps the reinforcing material together in layers that are composed of different materials. This organic matrix serves as a framework for crystallization in the structure of the teeth. In the mineralization system, the basic macromolecule α-chitin component is created first. The first mineral that then precipitates is the “goethite,” i.e. the aqueous iron-oxide mineral, which crystallizes parallel to the chitin fibers. These crystals are nucleated on the chitin fibers and formed between them by pushing and pulling the fibers. This way, crystals placed in order cause biomineralization of the structure.

It was found that 80% of the overall volume of the structure is composed of these crystals. The gap between the crystals and the chitin matrix is filled with amorphous silica (SiO2). The iron contained in the aqueous iron-oxide mineral is the metal that constitutes the largest proportion of the composition. Other metals such as sodium, potassium, calcium, and copper are present in different proportions depending on the sea snail’s exact geographic location. 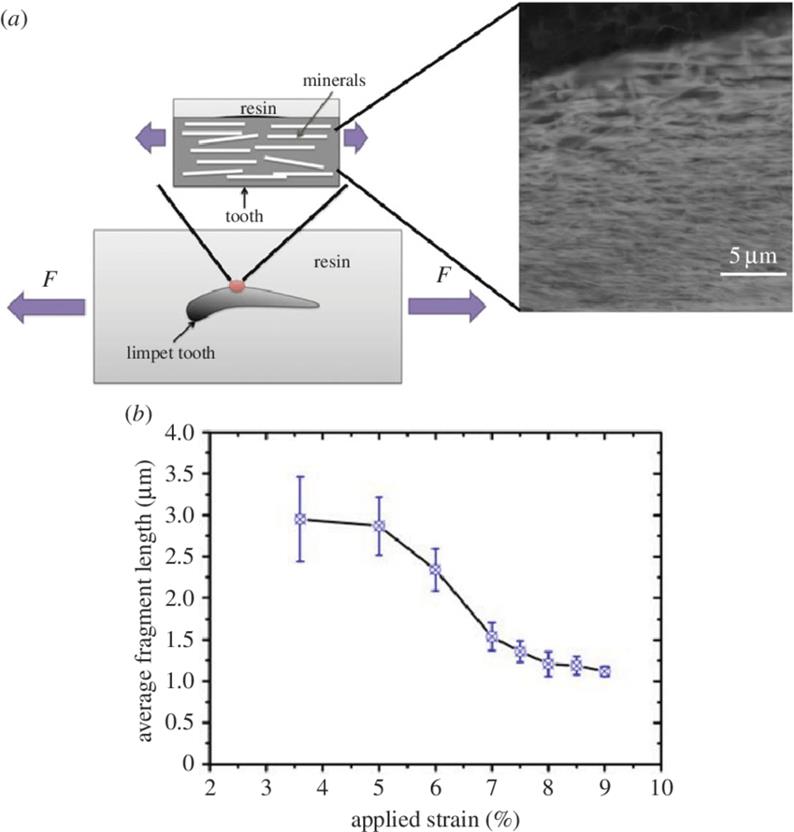 The most important reason that the sea snail’s teeth have such high durability is because the fibers of the aqueous iron-oxide minerals in the teeth are nano-scale. This is due to the fact that materials of this size are not affected by the conditions that reduce strength.

Another critical durability factor is the small length of critical fibers. Critical fiber length is a parameter that defines the length of a material required to transfer strain from the matrix to the fibers at the time of external pressure. To achieve maximum strain, the length must be greater than the critical length. Materials with a large critical fiber length can hardly reinforce the matrix because most of the strain is not transferred to the fibers and remains on the matrix. On the contrary, materials with smaller critical lengths can transfer the strain on the matrix to the fibers. Therefore, they serve as an effective reinforcement for the matrix.

Fibers of aqueous iron-oxide minerals are of a critical length of 420 to 800 nanometers. This is much smaller than the length of the fibers in the teeth of about 3.1 µm (micrometers). This shows that nanofibers are an effective reinforcer for the matrix and contribute greatly to the ability of the teeth to bear loads.

Besides the structure and composition of the snail’s teeth, its morphological shape is also important in providing strength. It ensures that the strain is evenly distributed all over the tooth.

All these studies indicate the presence of high-strength composites, which is when a material obtained by combining two or more materials with different physical characteristics, in nature.

Sea snail teeth, which have been created as a highly resistant and strong biomaterial, act as an inspiration for engineering and material science. Their characteristics, such as content and design, are expected to be modeled in areas that require durability and rigidity.

These marvelous systems found in the natural world, sometimes in creatures as tiny as a snail or mollusk, serve as a reminder that nature is filled with wonders for us to explore.