Cosmology is the study of the universe's beginning, formation, and evolution. Humanity has devised many cosmological theories. For example, ancient Greeks thought the universe was composed of four elements: earth, wind, fire, and water. Now, despite several millennia of effort, modern cosmologists are even worse off.

About 60 years ago, Fritz Zwicky realized that clusters of galaxies consist mainly of matter in some non-luminous form, defined as matter that we cannot see with our telescopes. Now, after decades of accumulated observations, most astronomers believe that as much as 90 percent of this material may consist of objects or particles that cannot be seen. That is, most of the matter in the universe does not radiate light. Previously, people called this phenomenon missing matter. Contemporary researchers prefer dark matter, for it is the light, not the matter, that is missing.

As dark matter emits no electromagnetic radiation (e.g., light, radio waves, and X-rays), it cannot be seen by a telescope. However, we can infer its existence through its gravitational effects on luminous matter. The most obvious example of this is observed when looking at the rotation rates of galaxies. Using the resulting information, scientists can calculate the speeds of stars as they rotate around a galaxy's center (orbital speeds) in two different ways. The first way is to look at the light coming from stars in different parts of a galaxy. Through a close study of that light's properties, they can deduce how fast and in what direction (whether toward or away from us) that star is rotating. The second way is based upon gravitational physics. Given that we know how much matter the galaxy contains, we can calculate how fast stars must be orbiting around its center. By accounting for all of the galaxy's luminous matter (e.g., stars, gas, and dust), astronomers can calculate the star's orbital speeds.

But there is a problem here: The two results do not agree. The only way to account for this difference is to posit the existence of a large quantity of dark matter in the galaxies. To explain the astronomical observations, this dark matter must surround the galaxy in a large spherical distribution (known as a galactic halo). 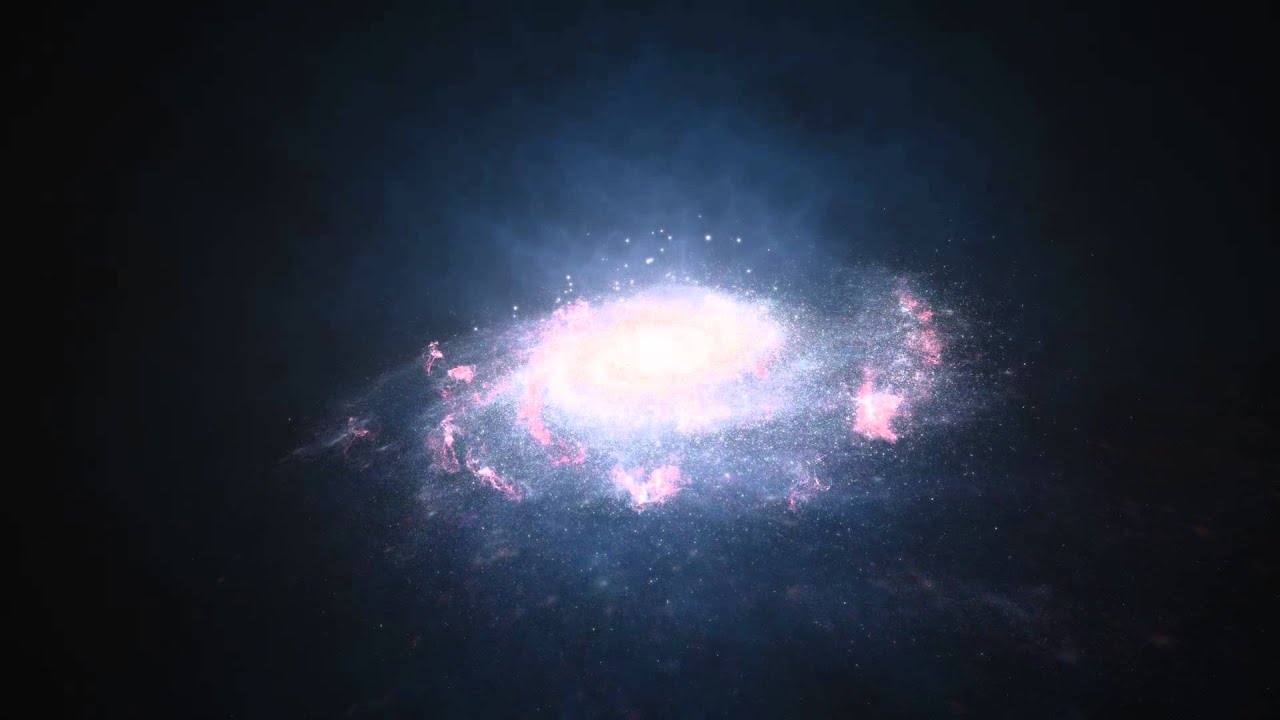 Is the gravity of the galaxies seen in this image strong enough to contain the glowing hot gas? Superposed on an optical picture of a group of galaxies is an image taken in X-ray light. The X-ray picture shows confined hot gas highlighted in false red color and provides clear evidence that the gravity exerted in groups and clusters of galaxies exceeds all of the individual component galaxies combined. The extra gravity is attributed to dark matter, the nature and abundance of which is one of the biggest mysteries in astrophysics today. Credit: Richard Mushotzky (*)

Another effect, known as gravitational lensing, gives evidence for dark matter's existence. This effect occurs when a massive object's gravity bends the light that is passing by. For instance, when a cluster of galaxies blocks our view of another galaxy behind it, the cluster's gravity warps the more distant galaxy's light into rings or arcs, depending on the geometry involved. By observing these rings, one can calculate how much mass should be present inside the galaxy to produce this pattern. Such calculations confirm that clusters contain far more mass than the luminous matter suggests. 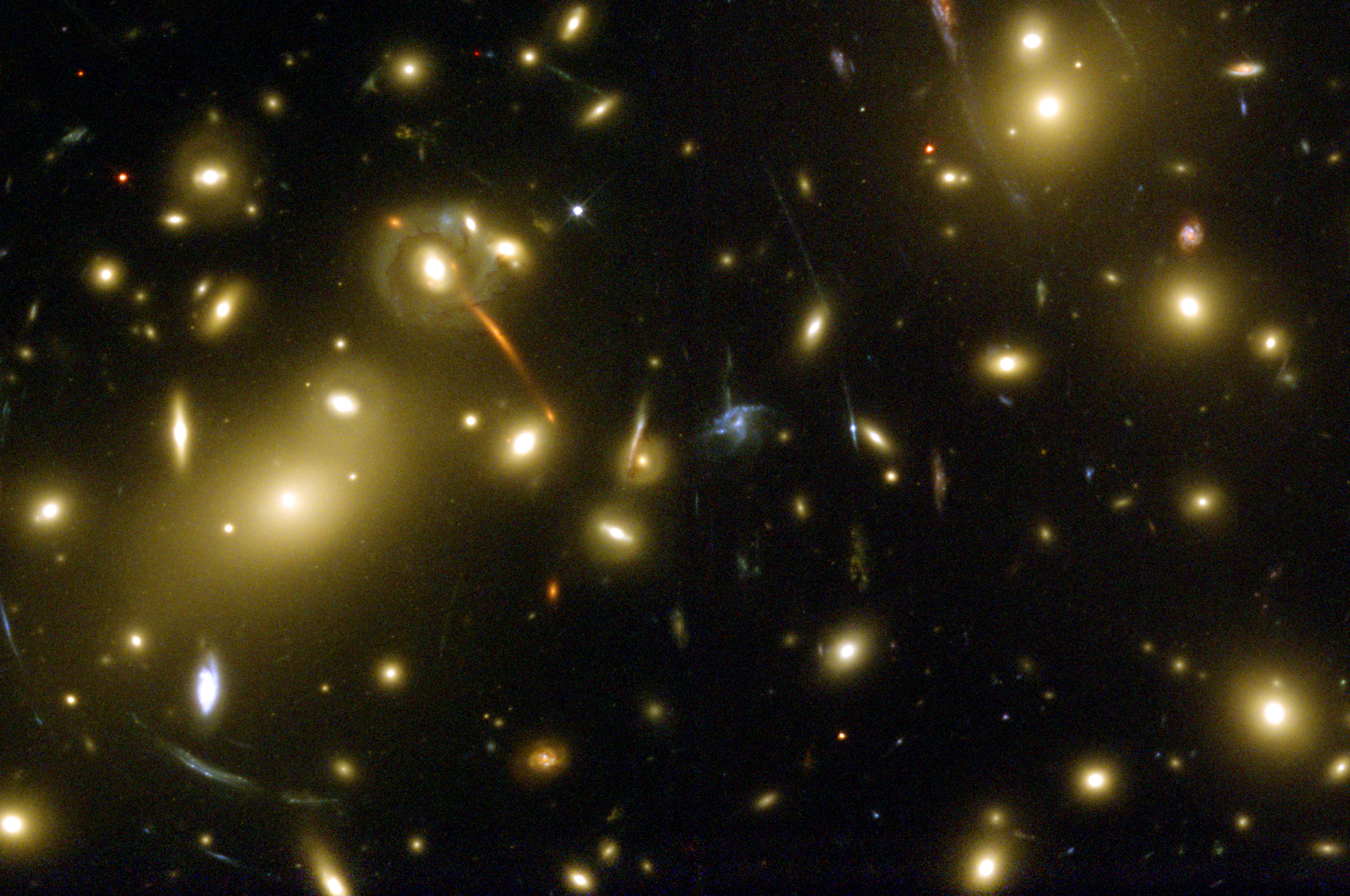 Image of the rich galaxy cluster Abell 2218, taken with the Hubble Space Telescope. This cluster shows evidence of multiple lensing images, as well as numerous strong and weak arcs. Using information about the arcs and multiple images allows astronomers to reconstruct the mass distribution, which then gives us knowledge about the distribution of dark matter. (*)

Understanding dark matter is a key to other important issues in cosmology, such as how much mass the universe contains, how galaxies formed, and whether or not the universe will expand forever.

The posited explanations for dark matter can be grouped into three main categories:

- Dark matter could be some kind of ordinary matter that emits or reflects too little radiation for our instruments to detect. Such objects are known as massive astrophysical compact halo objects (MACHOs) and may be ultrafaint stars, large or small black holes, cold gas, or dust scattered around the universe.

- Dark matter could consist of exotic, unfamiliar particles (i.e., different from such known particles as electrons, protons, and neutrons) that we have not figured out how to observe. These are known as weakly interacting massive particles (WIMPS). Despite the many theories about them, their existence remains unconfirmed. These exotic particles are thought to have very small masses (smaller than atoms), meaning that there would have to be a huge number of them to make up the missing matter. Thus, millions of WIMPs are passing through Earth and us. They interact with ordinary matter only by means of gravity. Since the interaction is very weak, it is difficult to detect them.

Our understanding of gravity needs a major revision--but most physicists do not consider this option seriously.

Dark matter and the universe

The search for dark matter is more than trying to explain discrepancies in galactic mass calculations, for it is closely related to how the universe was formed and will end.

The Big Bang theory, which tries to explain how the universe was formed, maintains that in the beginning, everything was compressed into a single point. Then, a great explosion resulted in the universe being formed. It is still expanding. This theory is based on the fact that all galaxies, when observed with telescopes, are moving away from each other. After this explosion, matter started clumping together to form the stars and galaxies we see today. The picture shows mankind's deepest, most detailed visible view of the universe provided by Hubble telescope. Representing a narrow keyhole view stretching to the visible horizon of the universe, the Hubble Deep Field image covers a speck of the sky only about the width of a dime 75 feet away. Though the field is a very small sample of the, it is considered representative of the typical distribution of galaxies in space, because the universe, statistically, looks largely the same in all directions. In this picture, Hubble uncovered a bewildering assortment of at least 1,500 galaxies at various stages of evolution. (*)

One problem with this theory is explaining how the stars and galaxies were formed. If matter initially was distributed evenly in all directions, what caused it to clump together in some regions and form stars and galaxies? Gravity alone cannot cause this in a smooth universe, and so something had to supply the initial gravity that allowed galaxies to form. Physicists suggest that dark matter WIMPs accomplished this task. Since WIMPs only affect ordinary matter gravitationally, physicists say this dark matter could be the seed of galactic formation.

The discovery of dark matter could affect our view of our place in the universe. If its existence were proven, our world and its inhabitants would be made of something comprising an insignificant portion of the physical universe. This probably would not affect our daily life, but would create a new scientific paradigm. In this sense, the discovery of dark matter would be as revolutionary as finding of extraterrestrial life.