Intelligence is such an elusive and relative concept that even the experts cannot agree on its nature. Definitions range from quick thinking under stress and learning a new language or a musical instrument. In this article, we discuss measuring intelligence, which is a function of brainpower. The mental functions involved vary from the objective (e.g., logical problem solving) to the much more subjective areas of creativity. People's ability to carry out these functions and even their intellectual performance depends upon the situation and criteria used to judge it. As intellectual ability is a complex phenomenon, influenced by biological and environmental factors, researchers ask: What is the nature of intelligence? Can it be measured or optimized? What do the measured intelligence differences between people mean?

The specific neurobiological processes, brain structures, genes, and other factors involved in human intelligence are still largely unknown. Current research on brain anatomy and physiology suggests that various levels of intelligence may be associated with such things as the number of connections between neurons or the degree of branching in cortical neurons. Important factors may include brain metabolism and how fast nerves conduct signals.

Measuring intelligence depends on which of the three intelligences one relies on and uses the most. For example:

Static Intelligence: The accumulated knowledge measured by IQ (Intelligence Quotient) tests. Psychologists call it cognitive content. Standard IQ tests have changed very little since their first appearance over 100 years ago, while cognitive psychology's understanding of how the brain and mind function has made great progress over that same time period.

Fluid Intelligence: How quickly the mind learns and adapts to new problems and conditions. Also known as practical or dynamic intelligence, this important aspect is hardly ever measured.

Brain Intelligence: Also known as BrainQ or cognitive capacity, this is the speed and efficiency at which the brain processes information. In electronics, Q is how efficient and well-tuned the circuit or system is. So BrainQ is how tuned the brain is, which is reflected in mental quickness, memory, and concentration powers. It is fluid and variable, as it is e very sensitive to environmental and lifestyle conditions.

Both static and fluid intelligence depend on BrainQ. Academic, professional, and even personal success depends mostly on BrainQ. In fact, studies have shown very little correlation between one's IQ score and monetary success. Most importantly, BrainQ (also known as brainpower) is highly trainable (improvable) with the appropriate type of exercise.

Emotional Intelligence (E-IQ) and BrainQ are correlated. According to Mayer, Caruso, and Salovey, emotional intelligence is composed of being able to identify, perceive, express, and understand emotions in different contexts; emotional understanding; and emotional management.

Abundant research proves that thinking about and testing for human intelligence is no small matter. Yet, Robert J. Sternberg, professor of psychology at Yale University, says that, in many ways, we have it all wrong: There are major problems with conventional thinking about intelligence at best, our notions are incomplete, and at worst, simply wrong.

The dominant psychometric approach to studying intelligence claims to measure intelligence through IQ tests. One's IQ is the result of dividing a person's mental age by his/her actual age. This procedure has been dropped, but IQ is still used to refer to the scores obtained on intelligence tests and to the tests themselves. Such scores are normally scaled so that the mean is 100 and standard deviation is 15. Ninety-five percent of the population scores within two standard deviations around the mean (between 70-130).

Many IQ tests exist to measure verbal, spatial, mathematical, and analytical skills, while others depend on reaction or recognition time to a visual stimulus. Several IQ tests combine multiple subtests, each testing a specific skill. Regardless of the test's nature, many researchers believe that factor analysis can extract a general statistical factor (g) from thes results of to obtain a general measurement of intelligence. There is evidence suggesting that g correlates with academic success and, to some extent, with measuring non-school accomplishments.

Despite its wide acceptance, not all researchers agree with the concept of a general, measurable intelligence factor. Some experts believe that g measures some types of intelligence (e.g., analytical problem solving) but not others (e.g., creativity and practical intelligence). Other theorists have abandoned the idea of accurately measuring intelligence, saying that there are multiple kinds of intelligence that cannot be measured with pen-and-paper tests.

Some studies have shown that young children exposed to stimulation-rich environments in kindergarten had higher IQ scores than their non-exposed classmates. However, such increases were mostly gone upon graduating from elementary school. Despite this temporary improvement, evidence suggests that the exposed children tended to perform better in school, were less likely to need special education, and were more likely to finish school. Thus, some cognitive functions as well as one's quality of life were enhanced.

The results of such test suggest that stimulation is a key factor in increasing cognitive performance. Could this positive effect be prolonged by continued exposure to enriched environments? Recent studies in neuroscience show that neuronal synapses in a highly stimulated environment tend to grow and expand, at least in the visual system, compared to those that receive only background static (white noise) input. Also, synapses tend to grow stronger with regular stimulation, which suggests that cognitive function may be improved by a variety-rich environment, stimulation, and activity.

Another suggestive study is the Mozart effect. Researchers picked his Sonata for Two Pianos in D Major for its complexity, and showed that college students who listened to it before taking a spatial-temporal reasoning test performed better than control subjects. However, the effect only lasted 15 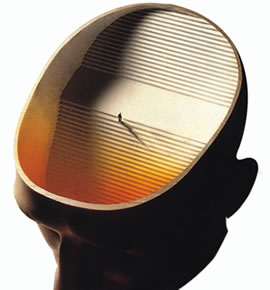 minutes and seems to be specific to the piece of music and to experimental conditions.

Although these results are limited to specific circumstances, they still have promise. The results are temporary, but one can make an analogy between these effects and those of physical exercise, which are also usually temporary. The key in maintaining and potentially improving cognitive function may be the forms of mental exercise. Solving puzzles, reading, learning new language or a musical instrument may have positive effects. Again, the important point may be in optimizing overall cognitive function rather than in increasing measured IQ scores, which research shows to be relatively stable after childhood.

Physical exercise clearly provides optimal results when combined with a proper diet. The same is likely to hold for mental exercises. Severe malnutrition while a child can have negative effects on intelligence, and the brain requires nutrients to function properly on a daily basis. Also, physical exercise seems to have a positive effect on mental performance. For example, aerobic exercise appears to increase memory retention, improve some types of creative problem solving, and has positive effects on general well-being. Also, exercise can help relieve stress, which has a negative impact on learning and memory. Various relaxation techniques are also beneficial.

Overall, it does not seem likely that measured IQ can be increased permanently. But other supporting factors of cognitive function might be enhanced, thereby optimizing overall mental performance. The best ways to do this seem to be combining physical and mental activities to create a stimulating environment, and to get enough nourishment.

Sternberg has made some interesting points that have been borne out by research results. For example, he has demonstrated that people can handle cognitive challenges in real-life situations. For example, housewives and Brazilian street children have difficulty calculating in a classroom, but not in a supermarket or while making a deal on the street, respectively.

Sternberg also has shown, in a study of Yale students, that students in the high-analytical group were much less diverse in terms of racial, ethnic, socioeconomic and educational backgrounds than those in the high-creative and high-practical groups.

Sternberg's research has critical impacts on teaching. He asserts: First of all, it is important to note that all three abilities analytical, creative, and practical can be taught. When students are taught in a way that best fits how they think, they do better in school. Children with high levels of creative and practical abilities, who are almost never taught or assessed in a way that matches their pattern of abilities, may be at a disadvantage in course after course, year after year.

However, Sternberg is aware that resistance to change in measuring intelligence is great and widespread. He adds: The U.S. has developed a multi-million dollar testing industry whose tests are based on conventional notions of intelligence. The modern version of the Stanford-Binet Intelligence tests or the Wechsler Adult Intelligence Scales have not evolved much over the years. Whereas old computers and old VCRs and old telephones rapidly go out of date, old tests never seem to die, except for updating of norms and cosmetic changes.

Sternberg is confident that conventional notions of intelligence can be surpassed, despite the reluctance and opposition to change, and that doing so will benefit everyone. He concludes: In fact, the most important abilities for science are creative abilities, and if we continue to measure students with conventional tests and do not value creative abilities in training, the result may be that we are picking the wrong people. People who are highly creative may be denied the opportunity to go into science, and science may lose its best potential to advance.

The current misuse of IQ or similar tests is not as problematic as the ones in past. Murray and Herrnstein's controversial The Bell Curve summarizes research allegedly purporting that blacks are innately less intelligent than whites. This conclusion depends on culturally biased IQ tests or content-oriented SAT tests. However, these conclusions neglect the social limitations, unequal conditions, underprivileged situations, low-quality education, malnutrition, and poverty. The famous Milwaukee Project of the 1970s showed that nurturing plays a vital role in a child's intelligence. And Goddard's results, obtained in the early 1900s and based tests given to newly arriving immigrants who had spent months on a boat, who were mainly laypeople, and often had little if any grasp of English, has been disproven by those very people and their descendants, many of whom went on to build quite successful careers in America.

IQ tests are culturally biased. However as Reynolds points out: The argument is whether the brain's processing speed determines how well one can do in an IQ test. The IQ tests and SATs are very content-oriented. If you weren't taught some important element, you'd be at a disadvantage (Report From Biomedical). Rather than this, an IQ test should check how quickly one's brain can process information.

In conclusion, intelligence depends on many things: daily diet, physical and mental exercise, emotional state, stress, and so on. It is not fixed or static, so one can improve it by a combination of techniques that suit the individual. In spite of the developments in cognitive science and medicine, measuring intelligence is still in its crawling stage and open for research. One can be filled only with awe before such a vital yet mostly unknown organ, whose functions have tantalized humanity for centuries. Thus, each person should appreciate having such a distinguishing feature and thank the Creator.