The Rise and Demise of Consciousness

The Rise and Demise of Consciousness

The Rise and Demise of Consciousness', '', 'In the very near future, neuroscience researchers will be able to pinpoint the exact area of the brain responsible for a person's consciousness (self-awareness). We already know in which part of mouse brain what certain physiological changes occur when certain odors are present. And once a scientific discipline's general principles are established, solving more complex problems is only a matter of conducting more complex experiments.

Perhaps the discovery of consciousness will begin with a simple assumption like: Humans are self-aware; animals are not. Although at first this seems to be valid, it will be very hard to support it with examples. Nobody ever saw a monkey crying and looking at mirror while thinking about its self-origin; or a fish committing suicide because of something it did; a snake becoming depressed, or a bird fearing God. However, just because we cannot see such things does not mean that they do not exist. Moreover, we hardly see such behavior among people. Perhaps they will say that self-awareness is a condition of the human brain and soul that lasts for a few seconds, during which people experience their own consciousness and thus realize their place in the universe, that death is inevitable, that they are responsible for their actions, or, in principle, that their existence has no meaning if they do not invent one.

Such statements, which seem dull to today's freshman philosophy students, will be welcomed with great enthusiasm in the scientific community. Although nobody can argue for the above human-animal assumption, empiricism, which always has been biology's main path, will cause researchers to compare the differences between animal and human brains, cell molecules, neural connections, and all other aspects.

It seems almost certain that the faculties of consciousness controlled by our souls will remain completely unknown to us until the end of time. However, the materialistic part of self-consciousness probably will turn out to be a group of cells connected to each other in a very special way, hopefully in a localized area of the brain. When this discovery is made with certain electrodes or other receptors, maybe we will be able to observe our free will's decision-making process. In fact, although our free will and self-awareness are somewhat related, it is easier to trace the free will. It will really be something when an article relates that a scientist will ask a human subject to put a knife in his hand without reason. He might do it, but a monkey would never deliberately hurt himself. It is quite possible that some form of communication between the neurons making up the consciousness will occur when the free will is deciding what to do.

Once the group of neurons that make up self-awareness are determined, work will start on clinical trials to learn how to transplant consciousness (c). Since c and memory are two different things, it will be argued that, in principle, it is possible to transplant c from a dead person to another and thereby increase the recipient's quantity of self-awareness. It is almost trivial that one's memory is also one's self. A person begins with no memories, acquires them while alive, begins losing them as death approaches, and then loses all of them through death. 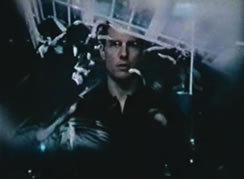 Only a deep perception of these memories by c can give a person a view and idea of the world. Given this, it follows that a person with more c will understand life and the world better, and will find more accurate solutions to problems regarding existence. Obviously, this person would need a certain memory that the c can work on”in other words, education. In summary, with c-transplantation studies, humanity will be able to produce individuals that can perceive the world from a higher perspective.

When c-transplantation surgeries are considered safe and that patients start seeing the world from a very different angle, most likely the organization that holds the rights to and carries out c-transplantation operations will become the richest medical company on Earth. Who would not want to be more intelligent, to lie down a normal person and stand up an ubermensch? There might even be government-funded research projects designed to see if more c will allow people to answer such questions as the meaning of life or the simultaneous existence of fate and free-will. This c-trade will make its founders rich, but only for a very short time.

Sadly, one of the fastest financial growth curves in history will end unexpectedly and very rapidly. The idea that a person with more self-awareness can understand life and the world better will still be valid, but after a couple of years people will not want it. This might be hard to

believe, for we have never been given such a choice. Consider this: Do we really want to live our own self-awareness now? Or is it that whenever our c finds us alone thinking about life, the universe, God, death, and so on, we run away from it like we saw a beast? Even though this makes us a lesser human being, do we really care about all that or do we just want to forget?

Remember the adventure of European philosophy, in which the Middle Age's ignorance was disrupted by the Renaissance and the Enlightenment's philosophical proceedings. Moreover, advances in science and positivism have augmented the self-awareness of intellectuals and of society in general. However, at the height of this awareness, we see the emergence of a pessimistic worldview, modern philosophy, and even ignorance”an intentional escape from thinking in the shape of postmodernism. The story of c-trade will closely resemble that of philosophy: Stocks will lose their value in a single day, and nobody will want any more self-awareness than they already have.

However, one day, when everybody has forgotten about c-trade, a person will emerge and lead humanity to everlasting happiness. This person will first perform a c-transplantation surgery on a living person to remove the c as if it were a tumor that does not kill but sometimes gives unbearable pain. And he will not transplant that c to someone else, but just throw it away.