you deify and invoke will never be able to create even a fly, even if all of them

were to come together to do so. And if a fly snatches away anything from them,

they cannot recover that from it. Powerless indeed is the seeker, and (so is) the sought!

In some verses of the Qur’an, mosquitoes and other small creatures are mentioned; when these verses were revealed to Prophet Muhammad, peace be upon him, some unbelievers sarcastically responded, saying: “This does not seem like the word of God.” They mocked these verses as they thought that God Almighty would not give examples of such “trivial and non-significant” animals in His Book. Later, Almighty God revealed another verse related to these responses:

God does not disdain to strike any parable – (that of) something like a gnat or something greater or lower than it. Those who have already believed know that it is the truth from their Lord. As to those whose unbelief has long been established in their hearts, they say, “What does God mean by such a parable?” Thereby He leads many astray, and thereby He guides many. He thereby leads none astray save the transgressors. (Al-Baqara 2:26)

During the revelation of the Qur’an, biological and physical sciences were not adequate to explain and shed light onto some of the sublime verses regarding these small creatures. However, in this century we have witnessed astounding advances in science and now we are better able to understand the extraordinary structure of such creatures. Once again, we are amazed at the accuracy, precision and eloquence of the Qur’an, which illuminated not only the Age of Ignorance, but also the modern world. Even though for believers the harmony of the universe testifies to the existence of the All-Knowing One without a need for understanding the details of physics or biology, for non-believers masses of learning or years of scientific education may have led them astray. In this article, even though the Qur’anic verses mentioned above speak of flies in general, our focus will be given in particular to the biological aspects of mosquitoes.

Mosquitoes are two-winged flies that belong to the family Culicidae. In nature there are approximately 3,500 species of mosquitoes. They have a pair of scaled wings, a pair of halteres,1 a slender body, and long legs. Their length varies, but is rarely greater than 16 mm (approximately 0,6 inches), and they can weigh up to 2,5 mg. A mosquito can fly for 1 to 4 hours continuously at up to 1 mile/h, traveling up to 6 miles in a night.2 Most species are nocturnal or crepuscular (dawn or dusk) feeders. During the heat of the day most mosquitoes rest in a cool place and wait for evening.

Females do not require blood for their own survival, but they do need supplemental substances (like protein and iron) found in blood to develop eggs. Prior to and during blood feeding, they inject saliva into the bodies of their source(s) of blood. Female mosquitoes hunt their blood host by detecting carbon dioxide (CO2) and 1-Octen-3-ol from a distance. Circulating blood in animals and humans radiates body heat. Thanks to the sophisticated heat sensors installed in their body, mosquitoes follow body heat and exhaled gases and fly to their target. From an unbiased point of view, that who led to the creation of carbon dioxide and 1-Octen-3-ol must have led to the creation of the sensors of female mosquitoes, allowing them to sense these chemicals. That who created the eggs of mosquito must have been aware of the needs of these eggs. This process alone proves the extensiveness of mercy, knowledge, wisdom and encompassment of a Conscious Sustainer Who is operating behind all these processes.

When mosquitoes land on their prey they search for a thin place on the skin where a great deal of blood is passing. In order for the mosquito to obtain blood it must circumvent the physiological responses of the prey. The mosquito sprays the place from where it is to suck blood with a type of local anesthetic. When blood flows from a cut, with the help of enzymes the blood quickly coagulates. The mosquito uses an elusive mechanism to effectively block the clotting of blood with their saliva, which contains a complex mixture of secreted proteins. Mosquito saliva also contains enzymes that facilitate in sugar feeding as well as antimicrobial agents that control bacterial growth in the sugar. Mosquito saliva contains fewer than 20 dominant proteins.3 Although there has been great progress in determining these molecules and their role in bloodfeeding, scientists are still unable to ascribe functions to more than half of the molecules found in mosquito saliva.

In general, there are four distinct stages in the life cycle of the mosquito: egg, larva, pupa, and adult. The adult is a flying insect, while the larvae and pupae are aquatic and live only in fresh water. All mosquito species lay their eggs on fresh water or on a moist surface. These eggs will not hatch until covered by rising water caused by rainfall, melting snow in the spring, or other such phenomena. The larvae of all mosquitoes live in water and have four developmental periods. In this stage, the larva actively feeds on organic material in the water. The larvae of most species have a breathing tube and come to the surface of the water to get oxygen. The durations of this stage depends on the species and the water temperature. The mosquito pupa is very active and lives in water. The pupa has a comma-shaped body with two visible separate regions. The tail of the comma is the developing abdomen of the mosquito. The abdomen is composed of nine segments. Between each abdominal segment are flexible areas that allow the pupa to swim. Active movement is unusual for most insect species during the pupal stage; however, mosquitoes will dive under water when the surface is disturbed or there is a disruption in light penetrating the water. The pupa has two large “paddles” on the eighth segment of the abdomen that propel it through the water as the abdomen flexes up and down. When the abdominal movement stops, the pupa floats back to the top of the water. A float hair, found on the first segment of the abdomen, helps the pupa to stabilize on the water’s surface. The pupal stage lasts for a few days and this is the stage when all the larval tissues change into adult tissues. The adult mosquito is capable of flying long distances. Males and females mate during the first 3 to 5 days after they have emerged from the pupal stage. Females mate only once. Males generally live for only a week and their primary function is reproduction.

The entire body of the adult mosquito is covered by an exoskeleton layer which provides the body with strength and support. The body of an adult mosquito has three regions, the head, thorax, and abdomen. The head contains the eyes, antennae, palpi,4 and mouthparts of the mosquito. Mosquitoes have compound eyes. This means their eyes are made up of numerous facets. Each facet is capable of forming a separate image. Therefore, the multi-imaging eye allows the mosquito to see movement over a large area, helping it to react quickly. The antennae are important sensory organs for the adult mosquito. They house a very significant sensory structure called the Johnston organ that helps to transmit movements of the antennae to the brain. The antennae differ according the sex of a mosquito. Males have many hairs on their antennae, making them look fury, while females have very few hairs. The mosquito has two sets of wings, the fore wings and the hind wings. The fore wings are used to propel the mosquito through the air, while the hind wings are highly modified structures that help to balance the mosquito during flight. Mosquitoes do not have lungs; rather, they receive oxygen through holes on their skins. These holes open and close according to the amount of oxygen the insect needs to function. Oxygen exchange takes place by diffusion. The mosquito has a needle, a hollow in the upper lip, which has a special cover used while sucking the blood from the skin of prey. The skin is not pierced by this needle, as thought, but by the upper mandible which look like a knife, and the lower mandible which has teeth leaning inward, that works and moves as a saw. The hollow lower lip has a lubricant that gathers the parts of the mouth as one organ. The skin of the prey is pierced by the upper mandible, which works as a knife, and in piercing the needle is inserted until it reaches a vein, and then the mosquito starts to suck blood. This process clearly indicates that mosquitoes have the necessary equipment to survive and sustain life in an amazing manner.

However, mosquitoes tend to carry various disease that spread viruses and parasites; they do not succumb to these diseases themselves. The principal mosquito-borne diseases are viral diseases, like yellow fever, dengue fever and malaria. Mosquitoes are thought to transmit disease to more than 700 million people annually in Africa, South America, Central America, Mexico and much of Asia, with millions resulting in deaths. At least 2 million people annually die of these diseases. The first Qur’anic verse mentioned above is also quite striking in terms of the disease spreading aspect of these insects. A powerless animal can snatch away the health of person who could be regarded as powerful; however, both of them are weak against the will of the One who created them.

Dr. Ibrahim Yildiz is a research associate at University of Miami Chemistry Department. 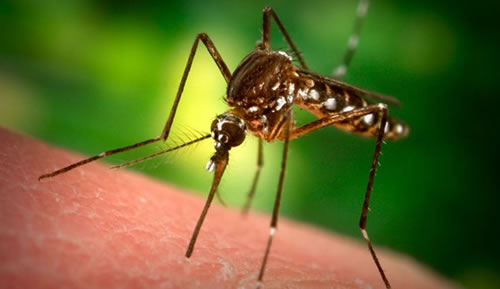 1. Halteres are small knobbed structures found as a pair in some two-winged insects.

4. Palpi, plural of palpus, are jointed sense organs attached to the mouth of insects.