On Their Faces and Backs

On Their Faces and Backs

Mar 1, 2010
In numerous verses the Holy Qur’an makes reference to living organisms, and particularly to human physiology. The Qur’an does this in its own style, briefly mentioning some fundamental principles of the process or the phenomenon that it is referring to, without going into elaborate details. One of the verses that immediately captures the attention of the reader is the twenty-seventh verse of Chapter 47, Surah Muhammad, which can be translated as: “So, how (will it be) when the angels take their souls at death, striking their faces and their backs?” while describing the agony of death that the disbelievers will suffer. In Surah Al-Anfal (8:50), the Qur’an tells us: “… He causes those who are bent on denying the truth to die: the angels will strike their faces: and their backs…”

The phrase “striking their faces and their backs” leaves us wondering why “faces and backs?” What is special about these body parts in the context of death? The Qur’an is the word of the All-Wise and it is not possible for it to be completely deciphered by human reasoning. Yet, it is our duty as human beings to contemplate the message that our Creator has revealed for us. The moment of death is spoken of in many other Qur’anic verses and Hadiths. The experience of death is a great agony for the disbelievers: The (angels who) snatch (the souls of the disbelievers) forcibly. And those who gently take (the souls of the believers) joyfully (Qur’an, 79:1-2).

Undoubtedly, the experience of death is painful. Leaving the discussion about “faces and backs” to later in this article, let us first look at what pain is from a physiological aspect. It is common knowledge that the sensation of pain is conducted to the brain via the sensory nerves which connect with almost every single part of the body, particularly to the skin. The skin has different corpuscles (sensory cells) for the sensation of touch, temperature, and pain. When a nociceptive (pain inducing) stimulus is applied to the skin, this information is conveyed through the peripheral nerves in the form of small electric pulses (called action potentials), first to the spinal cord, next through the spinothalamic pathways, and then to the higher centers of perception in the brain. These little electrical pulses are felt as pain, temperature, or touch in various centers of the brain (e.g. somatosensory cortex), depending on where the signals originate in the skin. If a particular area is wired to a pain sensing corpuscle in the skin, the brain circuitry will be trained to perceive this signal as pain from early postnatal development. If, on the other hand, a particular nerve is connected to a temperature sensing corpuscle in the body, the part of the brain center that it is connected to will be trained to perceive this as temperature from early on in life. So, the perception of sensory information depends on how these little electrical signals are interpreted by the brain. However, the connection map of the nerves and the circuits that interpret them in the brain form very early in life and these connections are hard wired, that is, it is very difficult to change them.

Pain may be perceived without a real source of nociceptive input as a result of some neurological disorders. For instance, in an amputee, after a limb has been surgically removed, the cut ends of the sensory nerves may generate little electrical pulses (action potentials) on their own without a pain inducing stimulus. The subject might feel an intense feeling of pain in the missing limb! This is clinically known as “phantom pain.” The phenomenon known as “referred pain” has an interesting explanation, also based on neuro-anatomy. The pain conducting sensory nerves from various dermatomes (areas of skin) and some other nerve fibers that originate in the visceral (internal) organs of the body enter the spinal cord side by side as a bundle (spinal roots). When some of these visceral organs, such as the heart and lungs, contract a disease, the sensory signals generated by these organs are not perceived as pain because there are no pain sensing nerve endings in these organs. But, the sensory signals generated by these organs activate the pain sensing fibers at the point where they enter the spinal cord together. The pain therefore is felt by the brain as if it were originating in a certain dermatome. For instance, heart problems are felt as a pain in the left arm. Again, the interesting point is that the perception of pain depends very much on the wiring of the nervous system at the periphery and in the brain.

Needless to say, if the subject is deep asleep or unconscious for any reason, he or she would not feel pain because the brain has been entirely blocked from any sensory input. In the context of body-mind connection, we may consider these states where the soul has minimal connectivity to the brain.

What about the moment of death? According to Qur’anic verses the experience of death is different for believers and unbelievers. Is it possible that the intensity of pain that one experiences at the moment of death is related to whether or not the soul is still “connected” to the brain? Those who die in their sleep do not seem to show any signs of pain, at least not to those who are witnessing the event. We should note that Prophet Muhammad, peace be upon him, stated that sleep shares many common properties with death.

“He is the One who puts you to death during the night, and knows even the smallest of your actions during the day. He resurrects you every morning, until your life span is fulfilled; then to Him is your ultimate return. He will then inform you of everything you had done.”

Is it then plausible that the intensity of pain felt during death is a consequence of how connected the soul is to the body at that moment? These questions may or may not have been addressed by religious scholars in the past. However, information about the physiological events taking place during death is certainly very limited in the religious literature.

Let us take a quick look at the human nervous system, and perhaps this will shed some light on the verses we quoted at the beginning of the article. The peripheral nerves converge together and form bundles, called spinal roots, before they enter the spinal cord at one of the 33 different vertebral segments along its length. The brain and the spinal cord together constitute the central nervous system (as opposed to the peripheral nervous system). The only other neural pathways between the brain and the body are the cranial nerves, the nerves that enter the brain from underneath. There are twelve cranial nerves, most of which carry sensory information from the head or motor information to the head, with the exception of the vagus nerve (Xth nerve), which actually serves the visceral organs. So, it would be accurate to say that the sensory information that comes to the central nervous system enters either at the back (through the spinal cord) of a person or directly from the facial area. The phrase “their faces and backs” thus sums up all the neural pathways through which the sensation of pain can be conveyed to the brain, the interface where the body meets with the mind, or the soul.

It is possible that at the time of death, the pain receptors in the skin and deeper parts of the body start generating action potentials at a faster rate, as if great pain has been inflicted on these body parts. The ionic concentrations in the extracellular medium around the sensory cells can change as a result of diminishing blood supply, and this is probably felt more severely in the extremities at first. The increased rate of firing of action potentials is commonly observed in neuroscience experiments when a cell starts “dying” as a result of perturbations to the extracellular or intracellular ionic concentrations. A train of action potentials with an increasing rate of firing is frequently observed and eventually the action potentials stop completely when the cell can no longer function. A similar phenomenon may occur during the death of an entire living organism due to a reduction in the blood supply that is provided to the body parts as well as due to changes in the pH level from a lack of oxygen. This fast rate of action potentials will be perceived by the brain in the same way as a strong source of pain, e.g. crushing or ripping apart of the body. The principle concept is very similar to what happens in the case of “phantom pain.”

The choice of the word daraba (striking or smiting) in Verse 47:27 is also interesting to note. We describe a pain sometime as “throbbing,” because every time the heart beats the increased blood volume in the area makes the pain receptors fire faster episodically. It may be that this pulsating pain sensation is described as “striking,” using a figurative language in the Qur’an.

Of course, the fundamental question is whether the soul is still in the body and thus able to feel the agony at the time of death. Are the souls of believers taken by the angels before the agony of death starts so that they do not suffer through it? We have no evidence to answer this question one way or another. But, it is certainly within the power of God to make the soul feel the pain or to save a person from it. 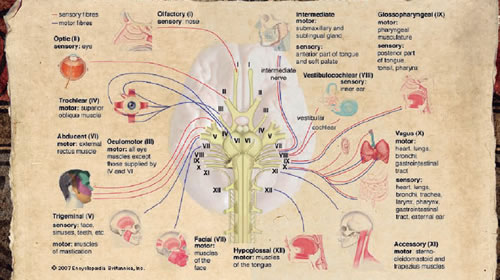