The smallest life forms that constitute our bodies, that is, cells, are fairly well organized structures. Even though the cytoplasm (i.e. the interior section of a cell) is extremely crowded and dynamic, cells never lose the coordination that keeps them alive, unless an external factor comes into play. Today, as the secrets of the cell are slowly unraveled these fascinating structures continue to challenge thousands of scientists throughout the world. However, it seems that there is still a long way to go before we attain a unified model that interconnects the numerous pathways of various intracellular functions.

For the sake of simplicity, the very complex - yet flawless - organization of a single cell can be portrayed as a city. Even in a very small city that has a relatively low population there are different establishments of various sizes and capabilities that work in concert. Likewise, in order to keep the cell alive the intracellular organelles and proteins of a cell complement each other's functions. Even though the majority of cities may have the resources to supply themselves, they also need to import and export goods. In addition, some cities may have greater industrial, residential, or agricultural strengths, making it necessary for it to communicate and trade with neighboring towns to eliminate shortages. In a similar way, cells have to communicate with neighboring cells, and bring in new sustenance and get rid of waste at different stages in their life cycles. In this article we will focus on one of the key elements of the import mechanism that is used by living cells, endocytosis.

Endocytosis is the process by which cells take in substances from outside. Since living cells are surrounded by a membrane, the cargo molecules, which are too large to penetrate through the membrane, have to be internalized by different means; this can be classified as Cell eating (i.e. phagocytosis: the endocytosis of large solid materials), cell drinking (i.e. pinocytosis: the endocytosis of liquids in large amounts) and receptor mediated endocytosis (the internalization of molecules that have specific receptors on the cell membrane) (Figure 1). During the course of these events, the portion of the cell membrane that surrounds the cargo is also internalized. However, at the present time, very little is known about the mechanisms that cause the cell membrane to invaginate and eventually be pinched off during the onset of endocytosis. Here we will concentrate on receptor mediated endocytosis, which has been intriguing biologists for more than three decades now.

Receptor molecules, which are located on the outer surface of living cells, function like receiving docks for cells. These are sites where the membrane-encountering molecule is first engaged. The cargo molecules, which arrive at the receiving docks, are often known as ligands (Latin ligare = to bind). Ligand molecules are either secreted from a neighboring cell or come directly from the bloodstream and can bind to the specific receptor molecules on the cell surface. In most cases the ligand is either a signaling molecule, which transmits information to the cell from the extracellular milieu, or a nutritious substance that needs to be internalized via endocytosis.

Unlike other forms of endocytosis, receptor mediated endocytosis occurs in a very controlled way. First of all, the ligand determines whether endocytosis will occur or not. Basically, a ligand molecule that does not have a corresponding receptor on the cell membrane cannot interact with the cell and, as a result, will not be internalized. For instance, a certain virus, which can cause severe lesions in the mouths of horses, cannot infect human cells, as our cells do not have the receptors that link the virus to the cell membrane. Secondly, the ligand cell determines how much intake will take place. That is, cells can control the amount of receptors on their membranes and thus how much the ligands that are recognized by these receptors will be internalized. By acting in this way, cells can adapt to different conditions by controlling the rate of endocytosis through the receptor molecules. The third way of control is concerned with the size of the molecules that are to be internalized. As we will discuss below, receptor mediated endocytosis is performed via some scaffold proteins that form cages (i.e. coats) around the membrane. These cages are fairly small in size, and molecules that are larger than 100 nanometers (100 nanometer is one-thousandth of the thickness of a human hair) cannot fit into them nor enter the cells along this pathway.

The conformation of the plasma membrane changes substantially during endocytosis. Given that the cell membrane has a fluidic nature, it must be accompanied by a firmer construction in order to perform these structural modifications. In the case of receptor mediated endocytosis, this function is carried out by clathrin cages (or clathrin coats), which are formed adjacent to the membrane. The clathrin protein is a three-legged molecule which can freely diffuse inside the cell. However, when a ligand molecule binds to a receptor on the membrane then multiple clathrins aggregate into that region and polymerize into cages composed of pentagons and hexagons (Figure 2a). These cages surround the cell membrane, compelling it to engulf the cargo (ligand) by invagination. When the cargo is entirely enclosed by the membrane a scission protein seals off the enclosed cargo from the plasma membrane (Figure 2b). The completely internalized membrane pouch rapidly casts away its clathrin coat with a quick uncoating reaction. After this point, the membrane pouch, including the cargo, can be transported to the inner compartments of the cell. In living cells, this process takes a little less than a minute. Even though the lifetimes of the clathrin coats are not very long, scientists have found ways of ascertaining the detailed organization of these molecules.

One of the most intriguing findings about the clathrin scaffold (or coat) is its breathtaking geometry. X-ray crystallography studies showed that the cages formed by the polymerization of multiple clathrin proteins are composed of pentagons and hexagons (Figure 3a). It has been also shown that in the majority of the cases the three dimensional structures of the cages are very similar to a soccer ball, where 12 pentagons are accompanied by 20 hexagons in order to create a curve (Figure 3b). However this is not the only geometry that clathrin coats can have. Electron microscopy images taken on frozen cells reveal that clathrins can also form some large flat arrays on the membrane which look exactly like honeycombs. In this configuration the pentagons are missing and all the clathrins align in the hexagon geometry to preserve a flat surface (Figure 3c).

The function of the honeycomb-shaped flat clathrin arrays is still a mystery. All we know is that they are more durable than the cages. In other words, although they do not have definite sizes like cages, they last much longer. Some scientists believe that these structures might be functional in the internalization of huge cargo molecules, such as bacteria, however, these claims still need to be proved. More research is needed if scientists are to be able to better understand clathrin-based endocytosis. Nevertheless, the fact that a simple geometrical modification at the molecular level can alter the entire mechanism of a biological process is on its own a very fascinating discovery.

Hamdi Sener is a biophysicist living in Boston. He can be contacted at This email address is being protected from spambots. You need JavaScript enabled to view it..

1. Even though bacteria are the smallest cells known, compared to the regular cargo molecules they are gigantic structures.

Figure 2. A) A clathrin coat (or cage) formed by the polymerization of multiple three-legged clathrin molecules. A single clathrin molecule is shown died with cyan. Adapted from RCSB protein data bank website (http://www.rcsb.org/pdb). B) The different stages of receptor-mediated endocytosis. The entire process takes a little less than a minute. 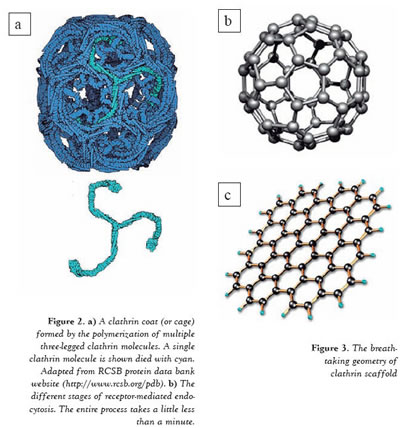 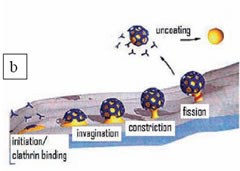