Towards the dream of Star Trek: Antimatter

Towards the dream of Star Trek: Antimatter

In physics, matter is defined as the composition of particles such as electrons, protons, and neutrons. Antimatter is composed of antiparticles such as anti-electrons (positrons) and antiprotons (protons with negative charges).

The existence of antimatter was suggested in 1928 by Paul Dirac and was confirmed experimentally in 1932 by Carl D. Anderson. They state that every elementary particle (matter) has its own anti-particle (antimatter): electrons have anti-electrons (positrons) and protons have anti-protons and so on. Antimatters have the same mass as matter, but they carry an opposite electrical charge [1]. For that reason, if matter and antimatter collide they cancel each other out, resulting in annihilation. This collision produces a tremendous amount of energy. For instance, a collision of 1 kg of matter and antimatter releases the energy equivalent to the explosion of 43 megatons of TNT [2].

However, producing antimatter is not an easy process and requires very energetic collisions in giant accelerators such as CERN, located near Switzerland, and Fermilab, located near Chicago, US. The annual amount produced in these laboratories is 1-10 nanograms. The typical process is to accelerate protons to almost the speed of light, and then send them into a metal target, which is usually tungsten. Because of the collision, the protons are slowed or stopped by the nuclei of the tungsten atoms. The protons’ kinetic energy is converted into matter that contains subatomic particles, and some of these particles are antiprotons [3].

To avoid annihilation, antimatter must be separated from other subatomic particles. One way to do that is to use the Penning trap in which charged particles of antimatter are confined radially by homogenous magnetic fields and axially by quadropole electric fields. Penn State and NASA scientists have already built such a device capable of holding 10 million antiprotons for a week. Now they are developing a Penning trap with a capacity 100 times greater [3].

Many of us remember the antimatter engine from the Star Trek series. Interplanetary travel has been humankind’s dream for centuries. Now, scientists are designing a spacecraft propulsion system that will work by expelling the products from the annihilation of protons and antiprotons. Such a propulsion system requires antimatter the size of an aspirin (10 grams) for hundreds of light years of travel. However, this amount of antimatter is not available yet, and with current technologies, it would cost around 100 trillion dollars to produce 1 milligram of antimatter.

One of the discoveries made by scientist at Penn State was that a space propulsion system would need only a small fraction of the antimatter consumed by a beamed core engine. It would work with an antiproton induced micro-fission (ACMF). In this process, Deuterium-Tritium (D-T) pellet and Uranium-238 (U-238) are compressed with a proton beam [1 in Figure 2]. After two nanoseconds, the pellet is subject to antiproton beams [2 in Figure 2]. Uranium U-238 absorbs the antiprotons and the result is a hyper neutronic fission that transfers the heat energy from the uranium core to D-T pellet and ignites it [3 in Figure 2]. Propellant inside the pellet is expanded to produce a pulsed thrust [4 in Figure 2]. 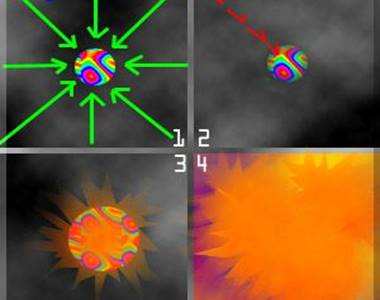 Another concept is called Antimatter-initiated micro-fusion (AIM), which was also designed by Penn State scientists. In this mechanism, electromagnetic fields continuously compress a small concentration of antiproton plasma [1 in Figure 3] Than the Deuterium-Tritium droplet injected into the plasma [2 in Figure 3]. Also a small amount of U-238 is allowed to annihilate with the antiprotons, which fully ionizes and heats the plasma. The resulting product is expelled out of a magnetic nozzle to produce thrust [3 in Figure 3]. Finally potential well is relaxed to its original state [4 in Figure 3] 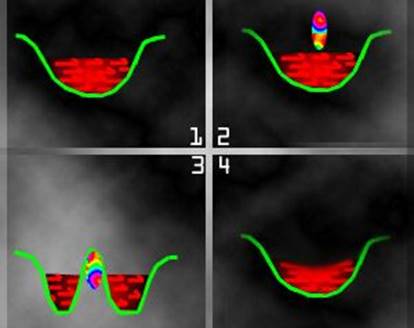 Scientists also believe that antimatter has the potential to be applied in medical sciences and one of them is fighting cancer. Currently, scientists at CERN are investigating the antiproton beam therapy as an alternative treatment. Experiments have compared the damage of proton and antiproton beams on hamster cells. The results show that the damage inflicted by antiprotons to cells at the end of the beam path was four times greater than that of proton beams. This means that one antiproton is enough to achieve the same damage as four protons, and moreover, antiprotons have unsurpassed ability to preserve healthy tissue [4]. 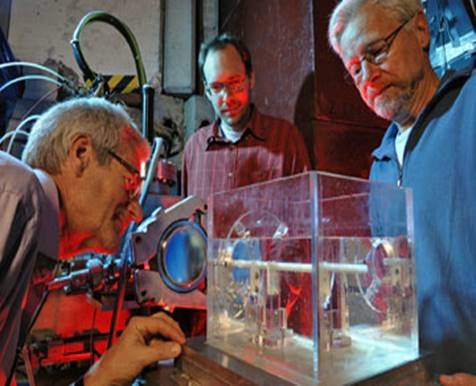 It seems that producing large quantities of antimatter is difficult and expensive today, but as long as we are on the right track with the right developments, one day, it could become a reality. If a significant amount of antimatter can be produced and controlled, this could help us obtain more information about nature, and it might become one of the world’s primary energy sources. It can also bring innovative solutions with medical benefits such as cancer therapy. Last but not least, antimatter also offers implications of existence beyond what we can see, thus an infinitely vast area of research to conduct via not only with our minds but also with our hearts.

Note: Author would like to thank Margaret Johnson for her useful comments on this article.