The Grand Mosque of Paris

The Grand Mosque of Paris 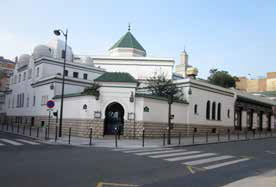 In these days, when tensions - expressed or unexpressed - are running high between Muslim and Jewish communities, The Grand Mosque of Paris comes as a breath of fresh air. It has the potential to heal the wounds in our hearts from this disease of hatred. It is this feeling and its subsequent actions that are responsible for the many deaths and the unfathomable destruction in today's world. We've said goodbye to peace and love has perished; the light of salvation at the end of the tunnel is difficult to see.

Written and illustrated by Karen Gray Ruelle and Deborah Durland Desaix, The Grand Mosque of Paris is published by Holiday House Books for $17.95. Bouquets should be presented to the authors for the research they've done to bring such a beautiful historical moment to life. This book is living proof that Muslims and Jews lived as brothers in the past.

At forty pages long, and with illuminating illustrations on nearly every page, this is a fascinating read. It is set in 1939, when the Nazis invaded Poland, initiating World War II. Jews, the Nazis' main victims, were in grave danger; they were being hunted down all over Europe. Many of them fled to France in the hopes of safety, but in 1940, the Nazis conquered France. A new French government of collaborators was set up, and as per the order of the Nazis, many anti-Jewish laws were passed. The new government rounded up Jews of all ages, mercilessly tortured them, and sent them to concentration camps, where millions died. Those Jews who were not captured began to seek shelter and refuge wherever they could. A large number of them found help in an extraordinary place: it was the Grand Mosque, the center of the Islamic Community in Paris, "... an oasis hidden behind high walls right in the middle of the city."

The authors have projected the Mosque as both a place of great beauty and as a place of refuge and sanctuary, glorifying the Islamic principle of helping people in distress:

"The Grand Mosque shimmered like a mirage, the white dome and the glittering mosaics of the minaret in shark contrast to the mutated colors of Paris. When the mosque was built in 1926, the North African countries of Algeria, Morocco, and Tunisia were under French rule, and many Muslims had come to Paris from those countries. The land for the mosque was given by the French government in exchange for a symbolic payment of one franc, to thank the half million Muslim soldiers who had fought for France during the First World War."

The mosque, with its graceful columns and arches, spacious courtyards, blooming gardens, and cascading fountains had a library full of rare manuscripts and books, steam baths, a clinic, and a restaurant. Everything that happened in the Muslim community - like births, marriages, and deaths - was duly recorded at the mosque.

This short book pays tribute to some notable persons who played dynamic roles in France and unflinchingly helped Jews - women and children young and old. There was Si Kaddour Benghabrit, the writer and diplomat who was in charge of the mosque. He kept the gates of the mosque open for Jews, housed and fed them, and kept them safe from persecution. In some cases, he even issued fake birth certificates to them to prove that they were Muslims. In one example, a young Jew from Algeria, Salim Halali, had a great desire to be a singer. In France, he was given protection in the mosque. Benghabrit secretly asked a stone carver to inscribe the family name on an unmarked tombstone in the Muslim cemetery, to convince the Nazis that Salim was a Muslim.

Another notable figure was Dr. Ahmed Somia, who cared for and protected the young children who were sick.

Besides these notable people, many unnamed Muslims in the French Resistance helped Jews to escape from Nazi-occupied Paris. Various means were adopted to disguise Jews. They were supplied with the Fez (a traditional tasseled wool felt hat) so that they could pass as Muslims. The Resistance also operated a secret network that smuggled Jews out of Paris to safety, sometimes through hidden tunnels under the basement of the mosque. These passageways twisted and turned beneath the streets for miles and miles until they reached the bank of River Seine, where Jews could then be transported to safe havens.

The authors, Ruelle and DeSaix, lament the fact that most important documents and manuscripts were either destroyed or lost during the Nazi invasion. After a long and laborious search, they could obtain only a few documents that threw light on the historical facts chronicled in the book. One letter, as the authors say, "... was recently found among the old papers of a Paris cafe owned by a Tunisian. The cafe owner said that it dated from World War II. It read:

Yesterday at dawn, the Jews of Paris were arrested. The elderly, the women, and the children. In exile like ourselves, workers like ourselves. They are our brothers. Their children are like our children. Anyone who encounters one of his children must give that child shelter and protection for as long as misfortune - or sorrow - lasts. Oh man of my country, your heart is generous.

Was this letter read out in the cafe? Did it circulate among the Kaybele workers of Paris, making its way through the crowded boardinghouses where these men lived? It certainly seems to be a call to action. Without a doubt, it is a recognition of the strong bond between North African Muslims and Jews."

When World War II ended, Si Benghabrit kept on serving in the mosque as its rector until his death in 1954. He was buried by the mosque. Jewish singer Salim Halali lived a long, successful life, and is revered as the father of modern North African song. Dr. Ahmed Somia continued his selfless devotion to the sick until his death.

The Grand Mosque of Paris, written in simple English, is a book that must be cherished. One cannot help but feel it could have been better if descriptions of the incidents and the works of the people mentioned in the book were in greater detail. Yet, it is a book designed for children, so the authors wanted to keep the level good enough for the aimed age group.