Curvature of the Heavens

Curvature of the Heavens

Mevlana Jalal al-Din Rumi, who lived in the 13th century, is still recognized as one of the most influential Muslim mystics in history [1]. Rumi is especially known for his poetry, which spread messages of love, diversity, and self-transcendence. Some of his major works include Mathnawi, Divan-i Kabir, and Fihi Ma Fih. Divan-i Kabir, also known as Divan-i Shams, was written mainly in the new Persian language and it is considered to be one of the greatest works of Persian literature (see Figure 1). 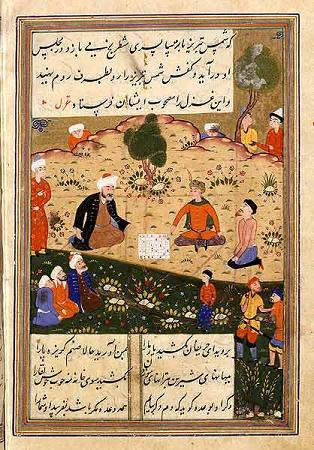 In this article, we will discuss a lesser known side of Rumi. In particular, we will show that, in his poetry, Rumi (knowingly or not) pointed to an astronomical observation called "gravitational lensing." We leave it to the reader whether this is only a pure coincidence or not.

We begin by investigating the following poem which illustrates unity and a love of humanity [1]. Originally, this poem comes from Divan-i Kabir. We would especially like to draw attention to the capitalized sentence below. In order to preserve the context and better understand how to interpret this sentence in relation to gravitational lensing, we included most of the neighboring parts of the poem.

Come, come, get closer.
Till when is this banditry going to continue?
Since you are I and I am you, what is this "us" and "them"?
We are God's holy light; we are God's mirror.
...
But why are we squint-eyed?
Although we are limbs of the same body,
why do the rich look down on the poor?
...
BUT WE HAVE SEEN ONE AS TWO
BECAUSE OF THE CURVATURE OF THE HEAVENS.
Come, liberate yourself from this selfishness
and reconcile with everybody and be nice to people.
As long as you are in you, you are a grain, a particle.
But when you mix and unite with others, then you become an ocean, a mine.
Every human being carries the same soul,
but the bodies are in hundreds of thousands.
Similarly, there are countless almonds in the world,
but there is the same oil in each of them.
There are many tongues and dialects in this world,
but the meaning of all of them is the same.
Waters put in different containers unite
when the containers are broken
and start to flow together as one stream.

Rumi makes several metaphors in the above poem. He, for example, compares the essence of all humans to individual mirrors serving one truth – that is, the reflection of God's attributes in them. This truth makes our goals one and the same. We were all created with one thought, one mind, which is to exhibit the manifestations of His Names and Attributes on Earth. Therefore, Rumi says we should act like the limbs of the same body and not look down on the poor. We should give away selfishness and unite around the same goal, so that everyone gains one greater meaning. The reason why we have seen one meaning as two or more lies in the Divine Wisdom of God and the reflections of His Wisdom on subtle details of creation, such as the "curvatures of the heavens." Despite these curvatures, everything – different bodies, countless almonds, and many tongues and dialects – has but one origin.

One of the Divine Wisdoms behind the diversity in creation is described in Al-Hujurat 13, in the Quran [3]:

"O humankind! Surely We have created you from a single (pair of) male and female, and made you into tribes and families so that you may know one another (and so build mutuality and co-operative relationships, not so that you may take pride in your differences of race and social rank, and breed enmities). Surely, the noblest, most honorable of you in God's sight is the one best in piety, righteousness, and reverence for God. Surely God is All-Knowing, All-Aware." [4]

If there would be only one tribe with identical members, skills, and roles, there would be limited motivation to know each other. This would significantly hamper progress on Earth. Imagine a world with one big family with a million members and no other families to compete with, such as the primitive tribes of the Amazon. Imagine another world with a thousand families with ten members in each such as the modern multi-national world. In the latter, it is more likely people will be motivated to know each other, to build mutuality and co-operative relationships, to compete and progress. Thus, it is more likely to manifest the reflections of God's attributes on Earth through piety, righteousness, and reverence for Him.

Having discussed the poem, now let's turn our attention to astronomy. In particular, we will point out the relation of "curvature of the heavens" with astronomy. In the original poem, this phrase is given as

In astronomy, every galaxy (or any other mass) deflects light, at least to some extent, coming from a distant light source in space such as a supernova explosion or another galaxy. Due to this deflection of light, if astronomers are lucky enough in terms of their position in space with respect to the deflecting galaxy, they can view two, or even more, images of the same galaxy by pointing their telescope in different directions. This is the result of the gravitational lens in astronomy [6] (see Figure 2).

Figure 2 Gravitational lensing. Light coming from a distant quasar behind a massive galaxy is deflected due to gravity. This results in the observation of multiple images from Earth. Credit: NASA/GSFC

A gravitational lens works pretty much the same way as optical lenses (see Figure 3), but uses gravity for refraction (or deflection) of light instead of an optically dense medium such as glass. 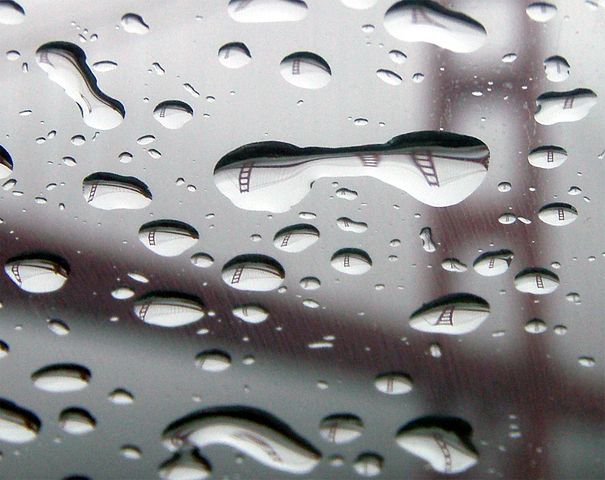 Figure 3 An image of the Golden Gate Bridge is refracted and bent by many different drops of water acting as lenses on glass. Credit: Brocken Inaglory

According to general relativity, light follows the curvature of space-time formed by massive objects (see Figure 4) [7]. Therefore, when light travels around a massive object, such as in gravitational lensing, it is bent.

Figure 4 Schematic of the curvature of space-time around a massive object. Credit: Johnstone

In Figure 5, taken by the Hubble telescope, multiple images of a single galaxy are shown [8]. The five blue circles show a unique, gravitationally-lensed quasar. This image is the first-ever picture of such an object. The red circles mark three remarkably different images of the same background galaxy. The galaxy is 12 billion light years away (corresponding to only 1.8 billion years after the Big Bang). The yellow circle marks a supernova that was found by comparing this image to a picture of the cluster obtained by Hubble earlier. It is interesting to note that not only is the Golden Gate Bridge in the background in Figure 3 analogous to the background quasar and the galaxy in Figure 5, but they both resemble the manifestations of the attributes of one God in various forms as metaphorically described by Rumi. 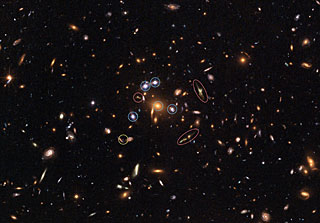 It is clear from this image that gravitational lens may mislead us into seeing one as two or more. Therefore we find the "curvature of the heavens" phrase in the poem quite striking. Astonishingly, Rumi somehow makes an analogy between the unity of humanity and the unity of a heavenly body that appears more than once to the astronomer due to the gravitational illusion produced by the curvature of the heavens, or perhaps space-time.

We would like to thank Zeki Saritoprak and Mustafa Kaya for their contribution to exploring the original edition of Divan-i Kabir. This article is produced either in part or as a whole at MERGEOUS (mergeous.com), an online article and project development service for authors and publishers dedicated to the advancement of technologies in the merging realm of science and religion.

8. The European Homepage for the NASA/ESA Hubble Space Telescope, "http://www.spacetelescope.org/copyright.html"