The Giant Tube Worm: The Hidden Paradise in the Darkness of the Ocean 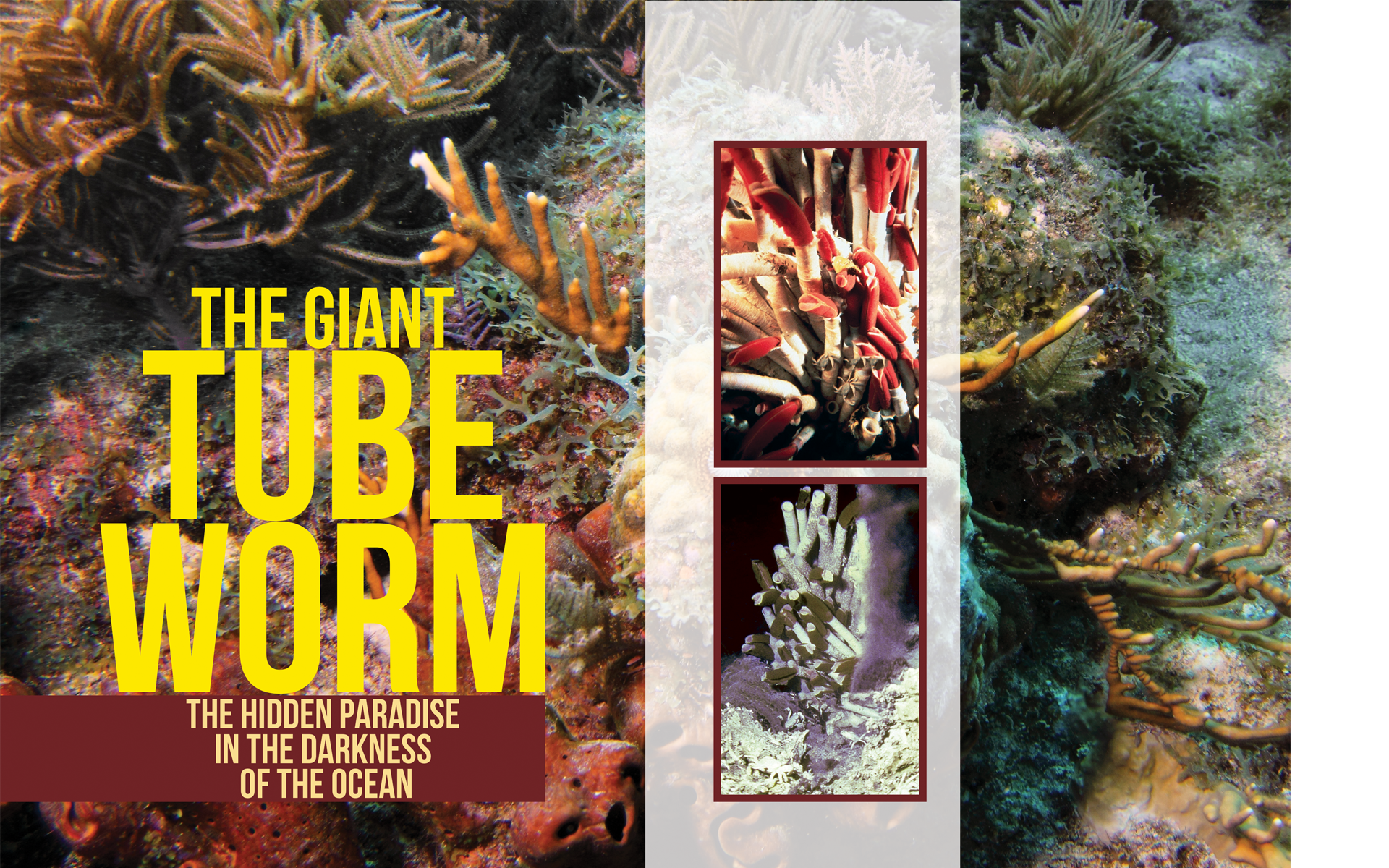 An important exploration was carried out in 1977 that extended into the darkness of the ocean. The awe-inspiring scenes the researchers stumbled upon upset their long-held beliefs. 320 km east of the Galapagos Islands, scientists on the research submersible Alvin discovered vents at a depth of 2,600 meters that had an extremely rich diversity of animals and other life. It was like a hidden paradise hidden behind what appeared as a dark and cold world. Such biological density and diversity was a complete surprise to the researchers. Of the many new species discovered, the giant tube worms, whose length reaches 1.5 meters, were a special area of interest.

Light, which makes photosynthesis possible, can penetrate only 200-300 meters below the ocean’s surface. This is the reason why most life is only observed to this level, called the sunlight zone, below which the number of living things decreases sharply. Organic matter is synthesized in the sunlight zone. Only a small fraction of it goes downward, so it becomes virtually impossible for animals to find food in the depths.

In 1982, scientists discovered life in the most unlikely of places: far below the surface of the sea, in an area of toxic volcanic emissions. How does anything survive in such an unhospitable place?

It was therefore confusing to discover creatures living at depths of 2,600 meters. The region where the creatures were found was one of hydrothermal vents. The temperature around the volcanic vents was 10-20°C, although water at this depth is normally much colder. The temperature was ideal for living things, yet studies at the hydrothermal vents showed that the vents were much like hot water sources on land: they were rich in hydrogen sulfide, an extremely poisonous compound. To put it simply, the region was highly poisonous. How could creatures continue to exist in such a toxic environment, where there was already a dearth of nutrients? As the conditions became more and more apparent, researchers began to believe that the region could not possibly support life. The mounting questions led them to launch their expedition.

Initial research tried to reveal the secrets of the native giant tube worm riftia pachyptila. Every bit of information simply added to the scientists’ awe. It had been known that environments rich in sulfur could hold a wealth of bacteria, which are created with the miraculous ability to produce their own nutrients. These bacteria derived the energy required for converting carbon monoxide into organic molecules not from the sun but from the oxidation of hydrogen sulfide. The sulfurous bacteria looked, therefore, like green plants. The only difference was the bacteria used a chemical substance (hydrogen sulfide), while green plants used light, for the production of food. In other words, the former used chemosynthesis, while the latter did photosynthesis.

Once the importance of sulfur bacteria to the ecosystem became known, a new question arose about giant tube worms. The giant tube worm was like a closed sac. It did not have a mouth or a digestive tract, nor did it have any mechanism that could ingest food. The creature had a red plume where oxygen, carbon dioxide, and hydrogen sulfide were processed. Below the plume were rings of muscles that enabled it to stick. The rest of the worm was composed of a sac-like tube that included internal organs. The largest organ of the worm was the trophosome, which specialized in digestion, yet the worm did not have any canal that could take food from the external environment. How, then, could the giant tube worm ingest food?

Studies into the trophosome intensified after the participation of Colleen M. Cavanaugh and her colleagues from Harvard University. The findings showed that the organ had billions of sulfur bacteria in it that produced nutrients. It became clear that there was a symbiosis between the worm and the bacteria. The tube worm fed on the carbon molecules converted by the bacteria, which received fuel for chemosynthesis from the tube worm in the form of CO₂, O₂, and H₂S. These raw materials were absorbed by the plume and were carried over to the bacteria in the trophosome through the circulatory system. The trophosome of the giant tube worm was working like a busy chemosynthesis factory. The findings answered an important question about how the tube worm received nutrition.

But how did bacteria make its way into the trophosome of the tube worm, which did not have any opening for a mouth? The question begged for an answer.

Studies focused on the four stages of development starting from larva to adult. It was found that there were openings for a mouth and anus in the body of the larva but there was no trophosome, pointing to the fact that bacteria entered the body at this stage. In the next stage the mouth and anus openings shrunk as the trophosome structure developed. In the adult stage, the creature became a completely closed pouch. Micrographs taken during the larva stage showed bacteria entered the body through the mouth and also revealed how the trophosome formed.

This is a world of contrasts! Fire burns but illuminates as well. The oases in uninhabited deserts, the volcanoes under freezing glaciers, or the light that begins at the darkest spot presents us a broad perspective for reflection.

One question that remained was about the poison. Hydrogen sulfide was an extremely toxic compound for animal; like cyanide, it prevented breathing. Sulfur closes the bonding areas in hemoglobin molecules and prevents breathing by disrupting cytochrome c oxidase, a respiratory enzyme. Yet studies showed that the respiratory rate of the tube worm was, wondrously, quite high. It was a mystery how the creature could possibly breathe with oxygen considering the high sulfur concentrations. Teams of researchers from several universities carried out intensive studies to uncover the mystery. Research finally revealed that the creature was protected from the lethal effect of sulfur through the presence in its blood of cytochrome coxidase.