The Psychology of Kneeling 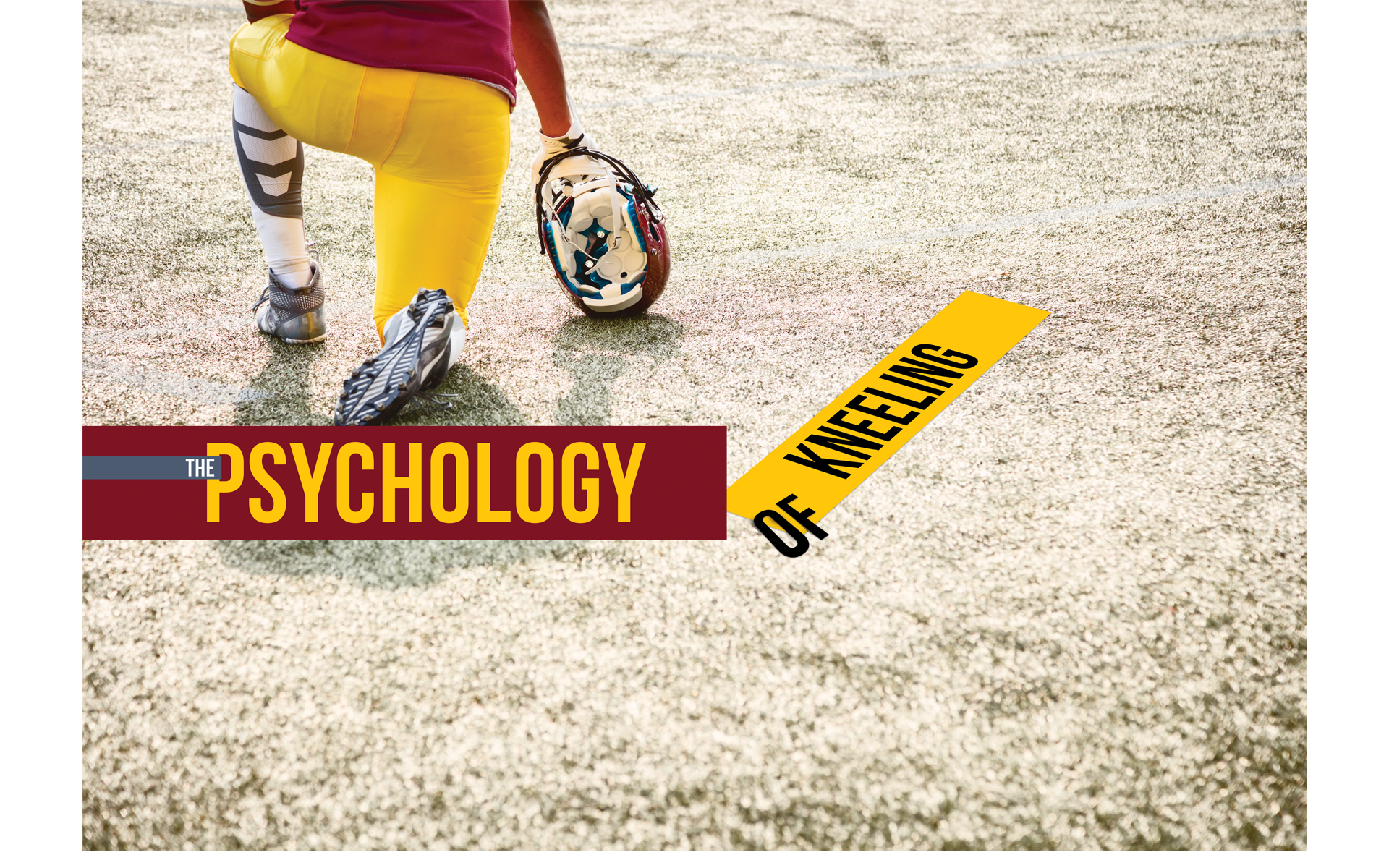 Many of us are aware of the controversy surrounding a group of NFL (National Football League) players in the United States who refused to stand during the national anthem. Instead, they chose to kneel. This action, used to protest systemic racism and police violence, gained much more widespread attention in September of 2017, when over 200 athletes kneeled in response to Donald Trump publicly pressuring NFL team owners to fire athletes who took part in this type of protesting.

Some of us may be wondering, “What is going through their minds?” or “What caused them to do this?” Fortunately, psychology can help us understand both why the NFL players decided to take a knee and why some people reacted so strongly towards this seemingly simple gesture.

Let us first consider this from a group dynamics standpoint. In psychology, group dynamics is the study of groups of people and how they interact both with other groups and among their own group members (Backstrom et. al, 2006). Some who are not in the group of NFL players may interpret kneeling as an act of aggression towards the status quo. We also know that all groups end up developing generally expected behaviors for nearly every aspect imaginable, including life, manners of speaking, and behavior. When an NFL player kneels, he is breaking the status quo of standing for the national anthem. This norm breaking signifies that the one doing the breaking does not agree with the current status quo. This disagreement could be an affront to other people who would prefer to keep that status quo as it is, and as a result, strong reactions are unsurprisingly observed.

Some football players in the United States protested violence and discrimination by kneeling during the national anthem. Psychology can give us some clues about the social motivations beneath their calls for equality.

Standing for the national anthem has become a sort of ritual for many Americans. Rituals have been shown to help foster group cohesion and loyalty. When these kinds of rituals are broken by group members it can be perceived as an attack on the integrity of the group itself. Furthermore, kneeling itself is traditionally a non-threatening maneuver that is associated with reverence and submissiveness. Athletes who kneel during the anthem are not intending to show disrespect towards it; if they were, they could have easily used a different gesture, such as turning their backs. Rather, they are intending to make a statement by deviating from the expected cultural behavior, while simultaneously showing respect for the flag and the song.

Another reason why this non-aggressive act may trigger such reactions is that people in positions of relative privilege may be more likely to stereotype others. In this case, white football fans may believe stereotypes that black athletes are aggressive and violent and, because of this, the non-violent act of kneeling may be perceived as a violent act.

There are other psychological lenses through which one can view the act of kneeling. One such lens is Realistic Group Conflict Theory. This theory posits that because different groups often have differing goals, conflict inevitably results when the goals of these groups are at odds with each other, in addition to other triggering elements like low levels of cooperation between groups or differences in group interests. In this situation, one group of people feel that to kneel during the national anthem is a sign of contempt for the anthem and the country, while the football players are interested in restoring equality to disenfranchised minorities. If these two groups continue to exist in opposition to each other, then conflict between the groups themselves will likely remain ever present.

Another theory that may help explain the act of kneeling during the national anthem is Relative Deprivation Theory. This theory states that when a person or people is deprived of a social category, conflict may arise. From this perspective, the players kneeling feel that they, and other members of their group, have been denied equality. The act of kneeling is meant to be an action that can resolve this discrepancy and restore equality to their group.

One last theory that can be applied to this situation is Social Identity Theory. In this theory, when a person is evaluating other groups they are aware of both their own personal identity and their social identity. Conflicts can arise in cases where there is an apparent, whether true or not, difference of status between one’s own social group and the group being compared to. In this case, the conflict over kneeling arose because it pits two different social groups against each other. The players who kneel during the national anthem feel that there is a need for change in the status quo to restore equality between minorities and whites, and are comparing their social identity negatively towards other groups.

Although the issue of kneeling can be better understood through psychology, are there any practical solutions such a perspective offers us? Literature in psychology suggests that when groups are in more frequent contact and dialogue with one-another, they achieve a better understanding of their goals and interests, and subsequently are less likely to be in conflict over those goals (Schneider et. al, 2005). In this example, if people who believe that standing during the national anthem is inherently disrespectful were to discuss their viewpoints with NFL players who kneel during the anthem, they would be better able to understand why the players feel compelled to perform this action – not out of disrespect, but as a call to action for better treatment of all groups.