Deep Peace as the Emerging Alternative 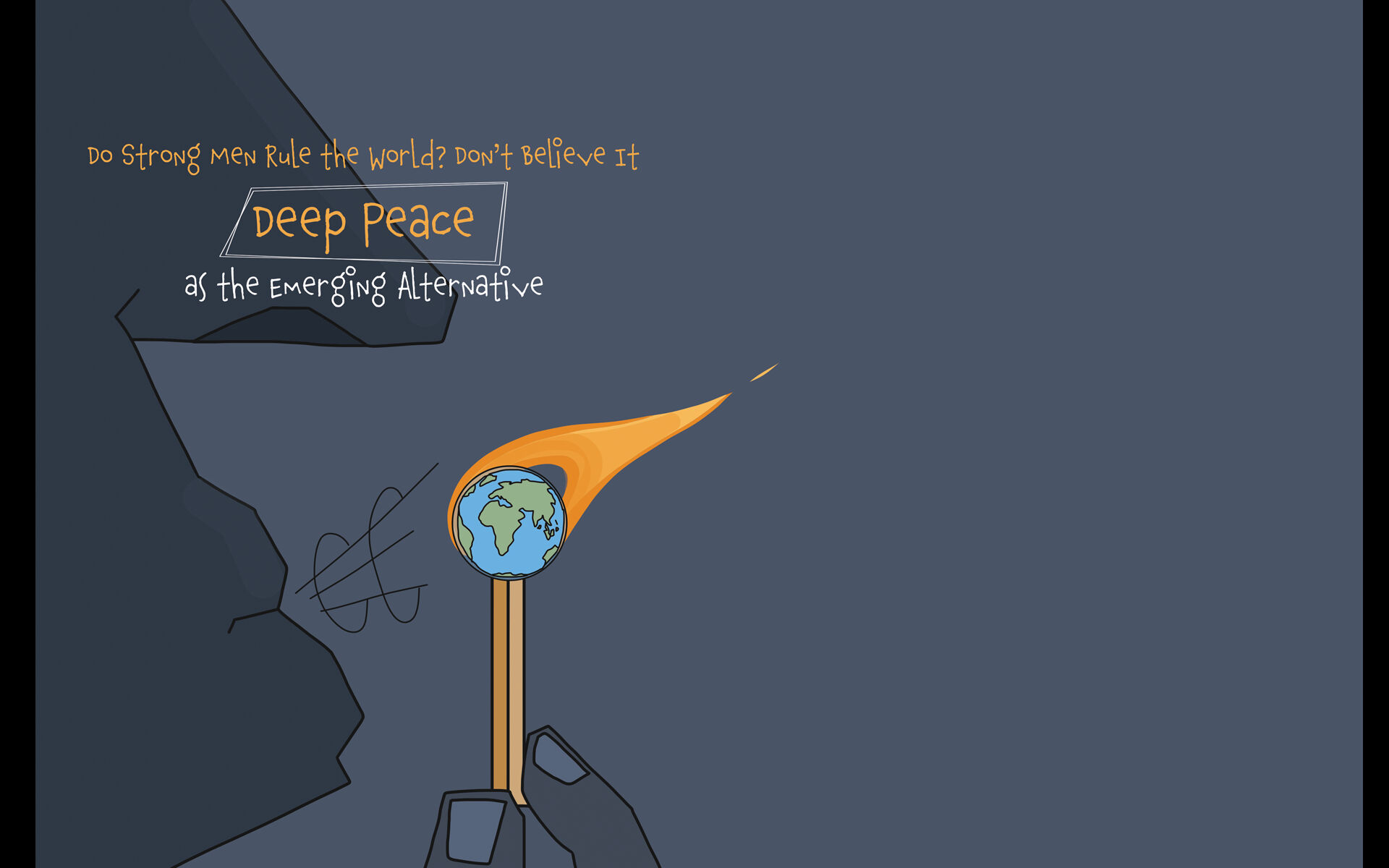 In the early decades of the twenty-first century, strong-men like Okonkwo, the tragic character in Nigerian author Chinua Achebe’s classic novel Things Fall Apart, appear to rule the world.  From Russia to Turkey, from North Korea to the United States, men driven by fear and a need to demonstrate their masculinity through power control armies and nations. Okonkwo, Achebe tells us, was an athlete – a wrestler, a hard worker, rightly proud of his achievements – and yet he was also a man who treated people “with a heavy hand.” If you know the novel, and every literate person should, as it is truly one of the world’s classics, you know the story.  Okonkwo breaks the Week of Peace by beating his young wife, Ojiugo. He cuts down with his machete his adopted son, Ikemefuna, whom he loved, because, Achebe tells us, Okonkwo “was afraid of being thought weak.” And then, when the British arrive with their “peaceful administration” (Achebe was a master of irony), Okonkwo responds first by killing one of the government messengers and then commits an offense against the Earth, tragically hanging himself from a tree. This “strong man” was driven by fear.

And strong men like Okonkwo do seem to rule the world.  Yet I want to offer an alternative point of view, based in part on a recent trip to Nigeria. At almost the exact center of Things Fall Apart, Achebe has one of the wives of Okonkwo, Ekwefi, tell an old Igbo folktale that can highlight what happens when strong men rule.  Every Nigerian child knows the story. It’s the story of how the tortoise got a cracked shell. The birds of the Earth were invited to a great feast by the people in the sky.  There was a drought and famine on the Earth, and Tortoise was hungry. He heard about the feast for the birds and wanted to go along. So, Tortoise persuaded the birds to each give him a feather. Tortoise then made those feathers into two wings, so that he could go to the feast, and he flew with the birds to the banquet. On the way he told the birds that the people of the sky gave guests new names, and that his name was “All of You.” So, when the feast was served, Tortoise asked the people of the sky, “For whom is this great feast prepared?” And the people of the sky answered, “For all of you!” Tortoise then told the birds, “You remember that my name is All of You. The custom here is to serve the spokesman first and the others later. They will serve you when I have eaten.” Tortoise ate the choicest foods, leaving the birds only bones. The birds understandably grumbled. One by one, they then took their feathers back from Tortoise. He could not fly back to Earth.  So, he asked Parrot to take a message to his wife, to put out all the soft things from their hut. Parrot agreed, but then when he returned to Earth, instead he told the wife of Tortoise to put out all the hard things, like the machetes and guns and even a cannon. When Tortoise fell, he landed on these hard things, and his shell cracked into many pieces. A very strong traditional doctor was nearby, allowing Tortoise’s wife to gather the pieces of his shell and glue them back together.

I’ll return to this story near the end of this essay, but my main point in what follows is that despite all appearances to the contrary, I believe the era of the so-called strong man is coming to an end. It is not going to end easily, because when they feel threatened, such men react with displays of pride and force. But as Mohandas Gandhi and Desmond Tutu and other nonviolent peacebuilders learned, “when people decide they want to be free there is nothing that can stop them.” And strong men, too, can learn to change their ways. For as Jesus put it so clearly, when his disciple Peter reached for his machete, “Those who live by the sword, die by the sword.”

Among the most important books I have read in the past twenty years is a book by Harvard neuropsychologist Steven Pinker, The Better Angels of our Nature:  Why Violence Has Declined. It’s a big book, and it deserves to be read critically.  But Pinker’s main point is that statistically – and actually – we live in the most peaceful era of human history, ever. We experience today the longest life-expectancy, greatest creature comforts, least international warfare, lowest infant mortality rate, least food insecurity, and so on, of any era in human history. When we look at our lives objectively, compared to the lives of our ancestors even fifty years ago, life is good.

The world may seem like it’s controlled by so-called “strongmen,” but Jon Pahl believes faith, humility, and cooperation are set to bring about a new order of peace.

What has produced this peace, according to Pinker, is mutual consultation – the growth in democratic states, honest trading, and participation in international organizations like the UN. What Pinker fails to recognize is that the 20th century also saw a dramatic resurgence of religion around the globe, especially in the global South. Pinker sees this resurgence of religion as an obstacle to peace. I see it as the single most important reason for expanding peace. Our faith traditions are the most profound causes of peace on the planet. Our religions, within their discrete domains, and increasingly across their domains through interreligious cooperation, generate deep peace.

Peace cannot be merely the absence of war. Although it is much to be desired, the absence of war is what I call “basic peace;” it is the bare minimum required of any government. Beyond that basic absence of violence, though, there is a peace that stems from the collective decisions that people make through our governments. I call this “policy peace.” Economic policies that fairly distribute resources produce peace.  Policies that support the arts and sciences and education produce peace.  But beyond basic peace and policy peace is “deep peace.” Deep peace is the inner courage to face one’s fears without violence.  Deep peace is the calm confidence to trust another human being and to live and work together with them, no matter what.

Our religious traditions foster deep peace. That is why they have survived far longer than any nation. Our religious traditions, each in their own way, engage us in discourses and practices that foster the trust that makes cooperation possible. Across traditions, we learn to pray, fast, give thanks, dispense justice, and reconcile with our enemies. These practices build the trust that flows from deep peace and that leads to all the other kinds of peace. Our religions, in other words, foster the most crucial evolutionary survival mechanism: cooperation. They have power that no dictator can stop.

Practically, peacebuilders like Leymah Gbowee engage what Fethullah Gülen has called istishara, mutual consultation. I am nearing completion on a biography of Mr. Gülen, or, as he is known to his students and followers, Hodjaefendi, honored teacher. Most of his life has been spent in prayer and preaching, not politics. He practices deep peace. But he has also inspired the global Hizmet movement. And that movement grew, and continues, through istishara.

I saw the results in Nigeria. Despite pressure from the so-called “strong men” of the Turkish government, the work of people committed to deep peace in Nigeria, begun with a single school in 1998, continues. Seventeen different Hizmet agencies operate schools, dialogue programs, and a hospital. All feature some of the best facilities in the country. I visited the Nigerian Tulip International Schools in Abuja, Lagos, and Kaduna, and Nigerian Nile University and Nizamiye Hospital in Abuja.  They are thriving in their missions to promote literacy and health through compassion and trust. And they are growing through the joint efforts, the mutual consultation, between people of Turkish and Nigerian descent.

It may seem, then, that in this age of ruthless weak men – for that is what they are – that we are all like tortoise, divided into many fragments and tribes. But there is another tortoise tale worth recalling, which may be as ancient as that told among the Igbo. It is one of Aesop’s Fables.

There once was a speedy hare who bragged about how fast he could run. Tired of hearing him boast, Slow and Steady, the tortoise, challenged him to a race. All the animals in the forest gathered to watch.

Hare ran down the road for a while and then and paused to rest. He looked back at Slow and Steady and cried out, "How do you expect to win this race when you are walking along at your slow, slow pace?"

Hare stretched himself out alongside the road and fell asleep, thinking, "There is plenty of time to relax."

Slow and Steady walked and walked. He never, ever stopped until he came to the finish line.

The animals who were watching cheered so loudly for Tortoise, they woke up Hare.

Hare stretched and yawned and began to run again, but it was too late. Tortoise was over the line.

After that, Hare always reminded himself, "Don't brag about your lightning pace, for Slow and Steady won the race!"

It is my conviction – rooted in my faith as a Christian and in my awareness of global trends as a social scientist – that despite superficial evidence to the contrary, the age of so-called strong and greedy men who are in fact fearful and short-thinking men is coming to an end. Slow and steady integrity will win the race.