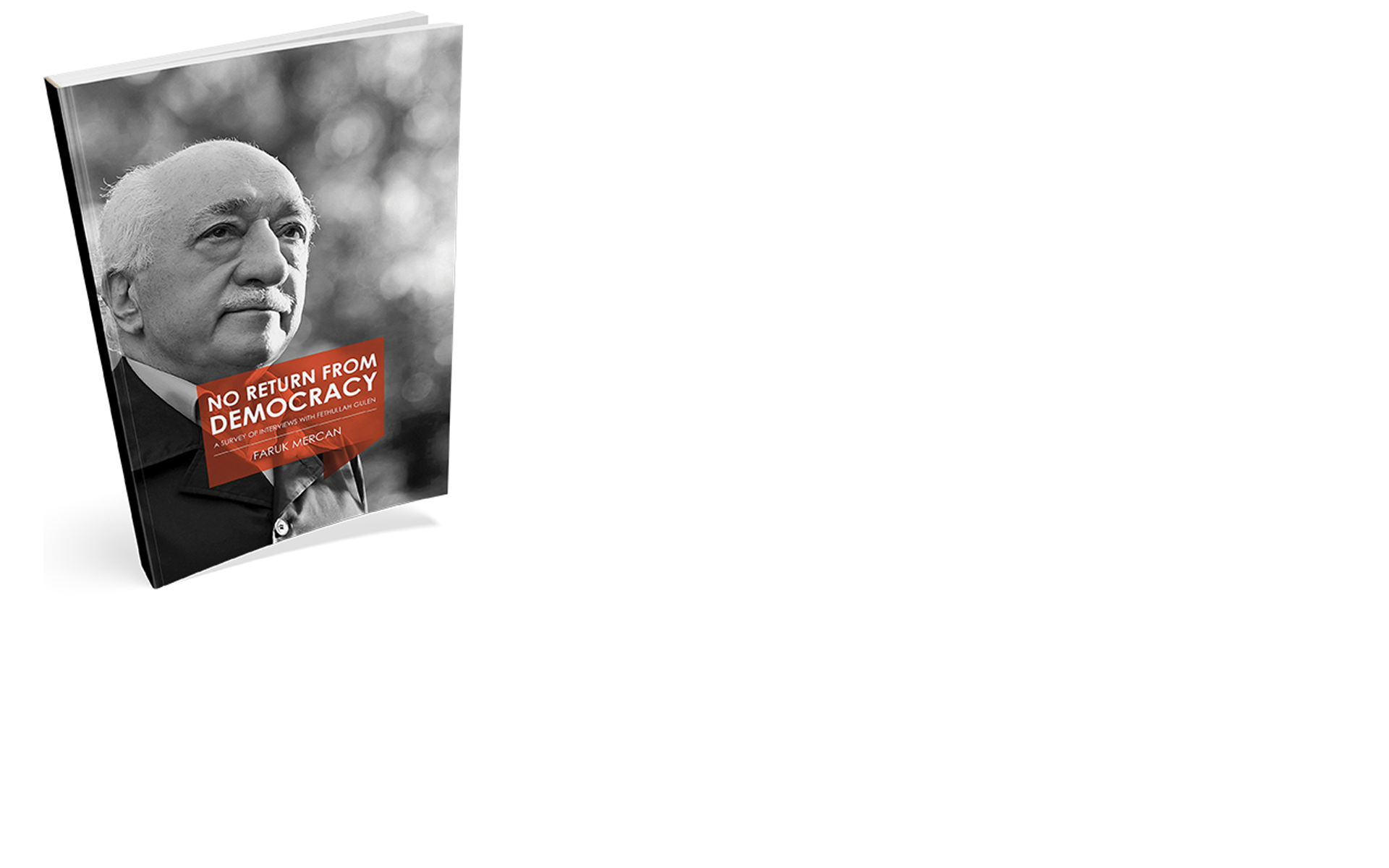 One morning, an office friend gets my attention and asks, “Have I (ever) given you this book?”

The face on the well-designed cover is familiar. It is that of a thoughtful Fethullah Gülen. My mind flies to Turkey, Gülen’s home country, and then to the state of Pennsylvania, where Gülen has been living since 1999. Gülen’s thoughts are for his homeland, who’s democratic backsliding has led to so much grief and suffering.

The title, “No return from Democracy,” is worth chewing on. With all the endless definitions and consequent divergent practices of democracy, which country on earth can claim to have been there? What kind of democracy? There are many different forms. Since when has democracy been a destination, so that pilgrims can talk of coming back? Isn’t democracy a country’s tool for achieving a certain level of freedom and perfection rather than a purpose?

The sub-title, “A survey of interviews with Fethullah Gülen,” leaves me hanging. It forces me to take refuge to the back page. The “avant-garde” French touch referring to Fethullah Gülen’s ideas turns into a real kicker. It renders it difficult to resist digging deeper into this man’s imprint on Turkey’s affairs and beyond, as well as his multi-dimensional scholarly, religious, and ethical life.

From the back cover I get the impression of an archive rather than the mentioned survey of Gülen’s scholarly thoughts and engraved faith and ethical views setting a positive democratization formula for our times and future political systems. If I were asked to name two major aspects that affect the world most today, I would point at democracy and climate change. The democratic world and the climate are in mortal danger as humanity turns its back to solidarity, mutual assistance, and generosity and instead engages in bloody, destructive wars and violence.

Now what makes it worse is that some perpetrators of violence – whether individuals or groups – claim to be working in God’s interests, even though their atrocities contradict the very purpose of His creation.  Examples of such violence abound.

Forgetting our duty towards God, our neighbors, and even our very selves has led rare people like Fethullah Gülen to emerge in the hopes of putting the world back on track. Their job is three-fold. First, they must make society (individual members or groups) aware of the fact that there is no such thing as violence for God’s sake. Second, these people stress that the religion of the perpetrators has nothing to do with crime. It is not a vice to be a Muslim just as it is not a virtue to be a Christian. Third, these rare people are teaching that spiritual values also apply to those who choose to accede to political powers.

In this regard, “No return from democracy” should be read carefully, understood and taken as a reference tool for those in search a truly democratic society, be it in Turkey or any other country. Eleven chapters and an appendix by Gülen himself condemning the coup attempt and denouncing terrorism send a clear and unequivocal message to the world; namely, that “A Muslim cannot be a terrorist and a terrorist cannot be a Muslim. A person cannot go to heaven by killing a person.”

In consonance with the letter and spirit of the book, the lead chapter responds to fundamental and thought provoking questions like, “Can Islam and democracy be reconciled? Can a Muslim also be a democrat? Can Muslims fully practice their religion in a democratic order? What kind of regime does Islam envisage? Does a theocratic regime exist in Islam? What is meant by an Islamic order?”

Gülen laments (p. 12), “… it is painful to see how those who speak on Islam and democracy and claim to pronounce in the name of religion have come to the understanding that Islam and democracy cannot be reconciled…” He argues this is wrong because it is built on a superficial comparison that “Islam is based on the rule of God, while democracy is the view of humans…”  He observes that on the contrary the true picture is one of “sovereignty (being) taken from individual oppressors and dictators and given to community members.” He cites “the era of the Rightly-Guided Caliphs of Islam” as “the application of this democratic norm of democracy” (quoted in The Muslim World, July 2005 Edition).

Accepting that there is no conflict between Islam and democracy, should we take such basic attainments as pluralism and human rights as having been invented in the West, or can they be accepted as universal values? Have they been applied in Muslim societies? In other words, is Islam conducive to democracy?

Gülen confidently asserts yes (p. 13): “None of these values (have) emerged only in the West and in modern times.” And for that matter, “we see that in its process of development, democracy has many different applications and that it has undergone many modifications and revisions.” He cites an assortment of prefixes of democracy like social, liberal, Christian, etc. “In some cases,” he says, “even one of these forms … may not consider the other as democracy.”

He goes on to reveal (p. 13, 14) “the principles and form of government that form the basis of democracy are compatible with Islamic values. Consultation, justice, freedom of religion, protection of the rights of individuals and minorities, the people’s say in the election of those who will govern them and the latter being held accountable for their actions, and prevention of the oppression of the majority or minority, can be cited as examples of the values and principles espoused by both Islam and democracy” (quoted in Frankfurter Allgemeine Zeitung, December 6, 2012).

In an interview with Ashrq Al-Awsat on March 24, 2014, Gülen pointed out (p. 17) “we sadly observe that in countries where democracy is demonized, human violations, moral and legal turmoil, and religious and ethnic disputes and conflicts abound. Currently, democracy is evolving to become a common asset and custom, as it were, of the entire human race…”

The gist of all his conversations is that “democracy is a rule by the people. It is a profound form of ‘republic.’ It is (the republic’s) soul; it is the more humane dimension of it. For this reason, in a sense … it always existed in the past, although it was not named.”

“We can even talk about a republic and the existence of a democracy without a name during the era of the Rightly Guided Caliphs. …Maybe between the systems there is an overlap. It is possible to reconcile them. For this reason, it could be thought that a republic and democracy might make a proper ground for Islam, Islamic thought, and the possibility of practicing Islam. Considering them as against Islam, in my opinion, is a wrong interpretation, a wrong approach…”

No Return from Democracy is an archive of Gülen’s unflinching insistence on taking the path of democracy and focusing on dialogue and coexistence. Throughout the chapter on dialogue and coexistence, Gülen is at his best when presenting tolerance, dialogue, and conciliation as the antidotes to violence. He demonstrates his level of exposure when he borrows a word from Socrates (470-399 BC) by emphasizing that “those who wish to reform the world must first reform themselves.”

Like Gülen, we should never lose hope “because problems can be solved with time” and we “should not try to find fault with religion because it does not allow for conflict…At the core of all this is being respectful to different ideas…and accepting people as they are, no matter what they believe in and what philosophy or ideology they pursue” (New York Times, 2010, and Asharq Al-Awsat, 2014).