Curtains in the Breeze 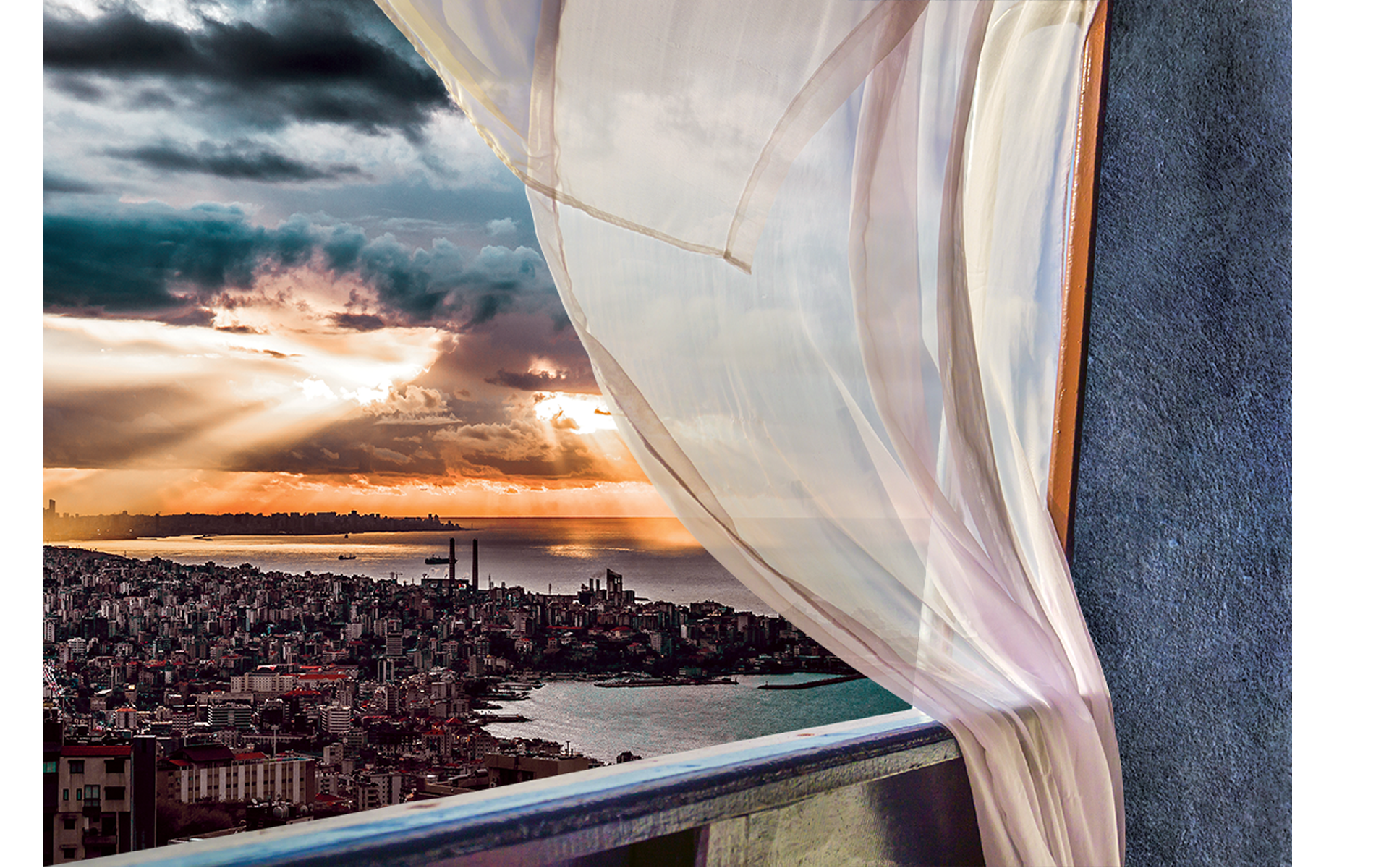 This isn’t to say that it always gets in the way. On the better days, at least, I can ignore it and get on with life. Sometimes, blissfully, I can even forget it’s there. But whether I like it or not, the end of the world is part of me now. As long as I remain, it also will remain. It’s seeped into my pores and seared into my subconscious. And so I sit here, half a lifetime later, and struggle to describe the end of my world, the memory that I’ve come to regard as the demon that follows me.

The memory begins quietly enough. I remember the curtains drifting with the warm breeze in the open balcony doors. Nine floors up, Beirut was spread out in a majestically sweeping view below. It’s a glorious, noisy, haphazard mess, but in spite of everything, I still love it today. If Beirut can come back from wartime ruin, I used to muse, as I slogged to school on the tough days, then why not hang on for a little longer? So, with the city’s amazing comeback unfolding around me, I carried on.

There was something miraculous about those years. The civil war ended in 1990, and for the 15 years between then and the bloody summer of 2005, Beirut, and Lebanon as a whole, slowly returned from the brink. Cities are living things, and to see one come back from 15 years of civil war was breathtaking. Little by little, I witnessed bullet-scarred buildings cleared and reoccupied. Pipes and wires were re-laid, and the mortar holes cratering the pavement gradually vanished. Museums and houses of worship reopened. All of this happened not just in one place but everywhere, all at once. On a clear day, standing beside old sniper nests, in the city whose name remains synonymous with battle, a person could stand, look in all directions, and lose count of construction cranes. Natural disaster and war could not prevail forever, not here. As it had so many times before, Beirut was coming back.

By the time I left it for the first time in 2003, the city had grown on me. The distant spine of the Lebanon Mountains rising through the Beirut smog, with white-capped Mount Sannine at their peak, even made me misty-eyed, on my last morning before the flight back to the States.

Surely, I thought, I’d always have this.

Then unknown assassins killed the tycoon-turned-Prime Minister, Rafic al-Hariri, in early 2005. As the lynchpin of much of the city’s reconstruction and the country’s fragile political balance, his loss was fatal. The city’s rebirth slowed, and the country slid toward what seemed like inevitable civil unrest. There was a lot of dangerous talk that summer, and the first of what would be many assassinations began. People – either partisan leaders or cabinet ministers – were getting blown up or gunned down in the suburbs.

It was still unreal to a young twentysomething like me. I was still wandering those old streets, just as I always had, lost in the happy haze of the city I’d known and loved. Two years after going home to the States for college, I was back, visiting my parents and picking up right where I’d left off. And, I told myself, as I read the news of assassinated cabinet ministers and the rumblings of insurrection, this all had to be temporary. Surely cooler heads would prevail, and surely peace would return. In a city and country that had already endured 15 years of war, and even though some people still had their secret Kalashnikovs stashed under the desk, surely we’d all had enough of war. Like it had so often, Beirut would come back from this brink, too. It had to.

Yet my hopes were soon dashed, because soon after that, the world ended one warm July night.

If I close my eyes, I can still see the old tube TV, tuned to one of the national networks. The chief of national police, resplendent in his slate gray uniform, was in the middle of an interview. He spoke at length about the recent unrest to an impeccably dressed journalist. He’d placed police everywhere he could put them, he said, and the public need not fear further violence. All is safe, so rest easy.

The breeze through the open balcony doors shifted. I put my feet up on the end table. Maybe, I thought, it’d be okay after all. They can’t possibly get by this many police. The official carried on, and between my mother’s translation and my own limited Arabic, I strained to follow. Beyond the balcony, the bustling city’s lights shone against the night sky.

Then the world ended.

It isn’t that I hadn’t before seen explosions or heard guns. This wasn’t like anything I’d seen before. Something was terribly amiss, because there was a flash bright enough to cast the city in a moment of terrible daylight. I didn’t fully understand, but even then, I knew something was horrifically wrong.

The monstrous moment hung in the air, a long sickening eternity. For an instant, I caught some of the city’s ambient sounds. My father and brother, on the balcony just beyond the door, saw it head-on. Then I heard Dad say the three terrifying words, calmly and quietly and in seeming surrender.

The building lurched against the sudden thunderous roar. The balcony doors rattled in their metal grooves. Then just as quickly, the thunder was gone. In a moment, I could hear the city again, but it wasn’t the same.

It would never be the same.

What once seemed to shine and shimmer like the fires of a rising phoenix was ash again, like the gray pall of smoldering cannon-smoke. Assassinations in the boondocks were one thing: we lived up the street from Parliament, and this was close enough that the balcony doors shook. The police chief was still talking, half an hour later, when he received word of what turned out to be a car bomb. “Don’t worry,” he said. “This isn’t a political bomb, it’s a personal one.”

Whether political or personal, a bomb is a bomb, and any distinction is cold comfort. A city and a person are living things. They don’t shake something like this off.

And neither I nor Beirut have been the same since that night in 2005 when the world ended.

It’s been thirteen years since the world ended, and yet, a part of me remains in that moment, because trauma and memory are strange things that don’t follow logic.

I don’t expect to go back to Lebanon. If truth be told, I don’t want to. Apart from it not interesting me in the first place, I’m not sure if I could live with it. Can you imagine walking through the ghosts of your own long-ended world?

Yet here I am, sitting in my home office Pittsburgh. It’s been more than a decade since my flight out of Hariri International, on a cool August morning about a month after the bomb. My afternoon coffee is sitting on my desk beside me, and I’ve caught up with my chores for the day. As I catch up with local news and make plans for tomorrow morning, the words "Mount Lebanon" catch my eye.

And as much as I don't ever want to go back, in an instant it's happened. A part of me is there again.

I’m a young twenty-something again, with her heart in her throat in that terrible silence between the flash and the thunder. I can almost see the distant spine of the Lebanon Mountains rising through the Beirut smog, with white-capped Mount Sannine at their peak. I can almost hear the staticky sounds of Radio Mount Lebanon, though my stereo is off. It's not the best station but where else am I going to get my fix of early-oughts American pop on an English-speaking station?

I look into my mug and feel myself frown for a moment. This is the wrong kind of coffee, I think, although you better believe I made it myself.

And then just as suddenly I'm back in Pittsburgh, with the ghost of six years in Beirut curling and twisting around me in a haze, like the last wisps of steam from the mug-contained dark brew I hold in my hands.

Quietly, I click through the various folders on my PC and queue up some old Lebanese music from those days.

Over the years since that flight out of Hariri International I've called trauma the demon that follows me. I've spoken of flashbacks as "getting yanked out of the present by my ankles."

But not everything I remember is terrible.

And maybe if I welcome the demon with coffee and the music of Philemon Wehbe and Samira Toufic, it just might be merciful this time. Because even if the world ended in 2005, it’s still here, and still ending.

After all, trauma, and memory, are strange things.