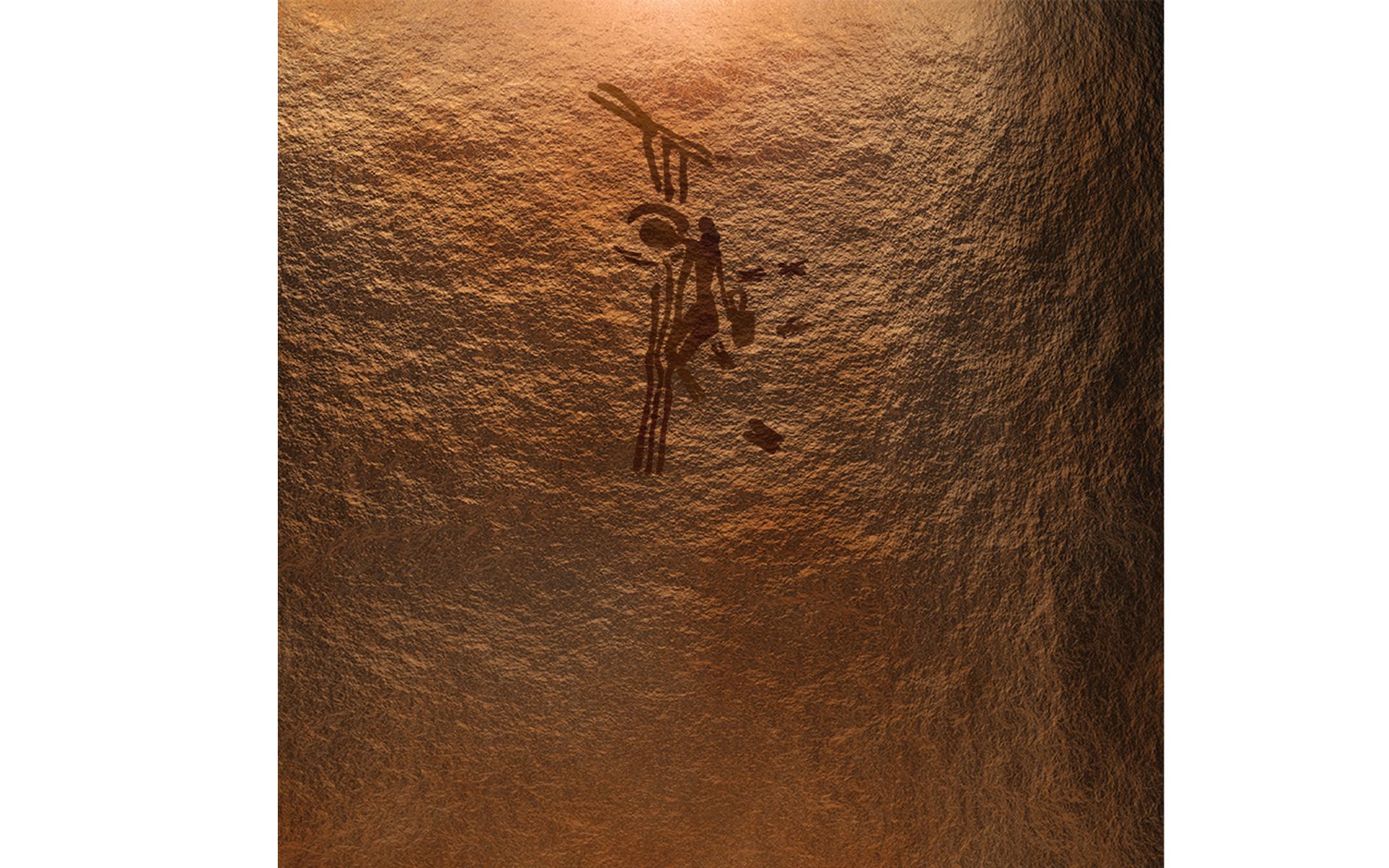 Hay and Su had been hungry for almost a week. Spring was in full bloom, and birds were chirping. Living in a cave was safer and warmer than outside, especially during the long winters. However, the food stock they had was almost finished. As the sun rose higher, the hunter-gatherer couple left their cave to find some food and hunt some animals to cook with the fire they had recently invented. As they searched for some fruit in the forest, they heard wood cracking and then a sudden loud growl from the bushes. The grizzly bear started to chase them, and they ran away quickly. They successfully ran back to their safe cave; however, during the chase, a tree branch scratched and wounded Su’s shoulder and she was severely bleeding. Hay first applied some ash to the wound to stop the bleeding; then he went out to the cliff, a smoking branch in his hand. He tied his rope ladder to a tree and climbed down the cliff. Once he reached the bee's nest, he gently waved his smoky branch to numb the honeybees and collected their honey, pouring it into a carved stone. Then he rushed back to the cave, covered Su's open wound with honey, and fed her the leftovers. The wound was closed within a couple of days without any significant inflammation, infection, or scar. Then Su and Hay carved their adventure into the wall of their cave, which is located in today’s Valencia, Spain, and was recently discovered by anthropologists – a mere 8000 years later.

Honey is a viscous, supersaturated sugar solution derived from nectar and honeydew. It’s gathered from flowers and modified by the honeybee, Apis mellifera. Honey is composed of more than 200 components, which are mostly carbohydrates (76%) and water (20%), as well as many other substances, such as amino acids, vitamins, minerals, organic acids, polyphenols, and enzymes. From ancient times, due to its high biological activity potential, honey has been used in wound care, infection control, and treatment of abdominal pains and skin and eye diseases. Thus, it was frequently mentioned in the early pharmacopeia of the Sumerians, Babylonians, Egyptians, Greeks, Romans, Indians, Chinese, Turks, Arabs, and other civilizations.

For the last two decades, scientists and healthcare professionals have studied the potential uses and benefits of honey. Cell assays, animal studies, and clinical trials have provided evidence for the use of medical grade honey in the control and treatment of wounds, cancer, diabetes, and asthma, as well as cardiovascular, neurological, and gastrointestinal diseases.

A wound is, broadly, the destruction of the integrity of tissue, which may also include neighboring areas. This destruction can be either penetrating or non-penetrating, and induced by accidents, surgeries, or violence (Martinotti et al). Depending on the healing time, wounds are classified as acute or chronic. Generally acute wounds heal in a short and predicted amount of time without major complications. The chronic wounds take much longer to heal and present different complications such as infection, contamination of the wound bed, or ischemia, the limited supply of blood that carries oxygen and nutrients to the wounded tissue. The chronic wounds are also known as ulcers and can be grouped as pressure (bed sores), diabetic, venous, and arterial ulcers, which mostly result from chronic medical illnesses such as diabetes, atherosclerosis, thrombosis, paralysis, etc. (woundcarecenters.org). The process of wound healing is generally divided into four overlapping stages: homeostasis (seconds to minutes), inflammation (3-5 days), proliferation (4-14 days), and remodeling (8 days to 1 year) (Miguel 2017).

In a recent Cochrane review, which is considered as the highest standard in evidence-based clinical resources, Jull AB et. al. reviewed the evidence about the healing effects when applying honey on different kinds of wounds (Jull 2015). They analyzed 26 different clinical studies involving 3011 people with acute (e.g. burns, lacerations) and/or chronic (e.g. venous ulcers) wounds. Honey was compared with many alternative wound dressings and topical treatments in the included studies. They concluded that there is high quality evidence that honey heals partial thickness burns around 4 to 5 days more quickly than conventional dressings. There is also reasonable evidence that honey is more effective than antiseptic gauze for healing infected wounds (Jull 2015).

As a particular example, Yusoff KM and his colleagues treated 102 patients with untreatable chronic wounds with honey as a last resort. Most of these wounds were infected with pathogenic bacteria of 14 different strains, and two of them were antibiotic-resistant bacteria, which could not be treated using conventional antibiotics. Of the 102 patients, 100% of them were successfully cured with topical application of honey within 4 to 7 weeks of daily treatment. Moreover, limbs of the diabetic wound patients were saved from amputation after their ulcers were healed (Figure 1).

Consequently, existing evidence from animal studies and clinical trials strongly suggests that medical grade honey has the potential to treat various types of wounds without causing any serious side effects.

Cancer is uncontrolled cell growth within a certain tissue or throughout the body due to mutations in the genome. As one of the major causes of death worldwide, more than 8.8 million deaths were reported in relation to cancer in 2015 (WHO). Meanwhile, cancer is not a disease occurring in one cell type only; there are more than 100 cancer types identified to date (cancer.gov). Both the genetic and environmental factors contribute to the development of cancer in different cells. There are three major steps when cancer attacks the body: initiation, proliferation, and progression. The normal cell transforms into a cancer cell due to an irreversible mutation within its genome; then it starts to replicate in an uncontrollable manner and forms a tumor mass; finally, these mutated cells invade the bloodstream and metastasize to different tissues within the body. Despite extensive research projects devoted to diagnosing and treating cancer, it remains as one of the least treatable diseases.

Conventional treatments for cancer are surgery, chemotherapy, radiotherapy, immunotherapy, and cellular therapy. Meanwhile, natural products with high anticancer potential are also being considered for research and treatment as complementary and integrative medicine (CIM) agents. Due to limitations of conventional methods, such as affordability and side effects, and promising evidence-based results of various CIM approaches, physicians and patients are getting more interested in CIM applications for the treatment of various cancer types.

Among the CIM agents, medical grade honey is one of the most promising natural products for treatment of some cancers due to its high bioactivity potential. Scientists studied the capacity of honey to both prevent tumor development and inhibit progression. Most of these studies were performed in vitro, using cell cultures in the lab. When tested on several types of human cancer cell lines (breast, prostate, liver, endometrial, cervical, lung, skin, kidney, bladder, oral squamous cell carcinoma, and osteosarcoma), honeys from diverse floral sources demonstrated potential anticancer activity (Ahmed S 2018, Erejuwa 2014). Moreover, several studies showed that different cancers, in animal models, were successfully treated with honey (Ahmed S 2018). It has been shown that honey provides antiproliferative, antitumor, antimetastatic, and anticancer effects via diverse mechanisms, including cell cycle arrest, the activation of mitochondrial pathways, induction of apoptosis, modulation of oxidative stress, amelioration of inflammation, modulation of insulin signaling, and inhibition of angiogenesis in cancer cells. It has also been shown that honey is highly and selectively cytotoxic against tumor or cancer cells while it is non-cytotoxic to normal cells. It can inhibit cancer development by modulating or interfering with the molecular processes or events of initiation, proliferation, and progression (Erejuwa 2014). In the PubMed, the largest database of biomedical research articles, there are almost 400 research papers and review articles published about the use of honey in cancer treatment. Moreover, there are more than 15 active clinical trials using honey for treatment of cancer and side effects of chemotherapy (Clinicaltrials.gov). Consequently, medical grade honey can be considered as a potential and promising anticancer agent which warrants further research—both in experimental and clinical studies.

Besides wound healing and cancer, honey is being actively studied for treatment of diabetes, neurological, cardiovascular, and metabolic disorders, as well as eye diseases. 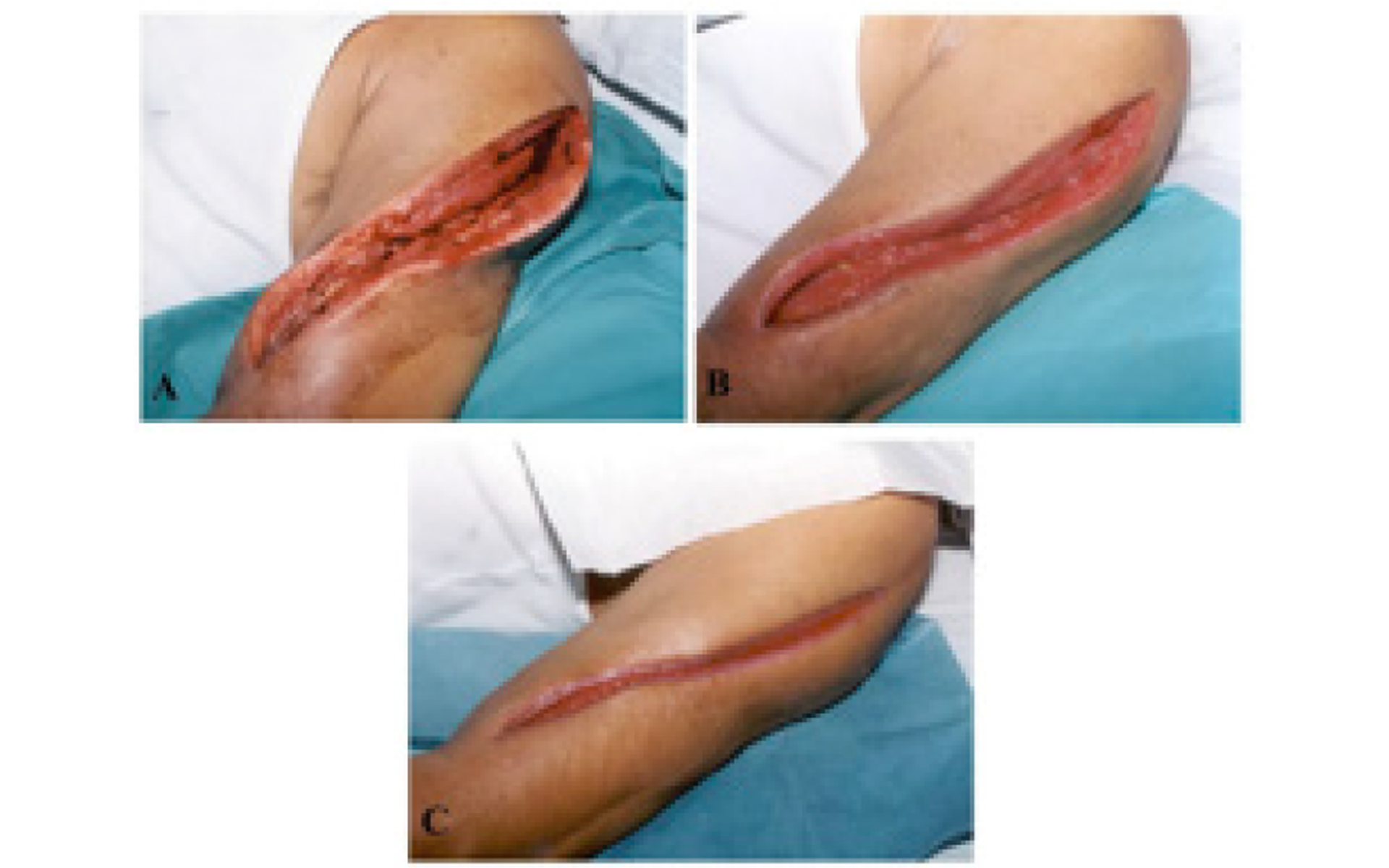 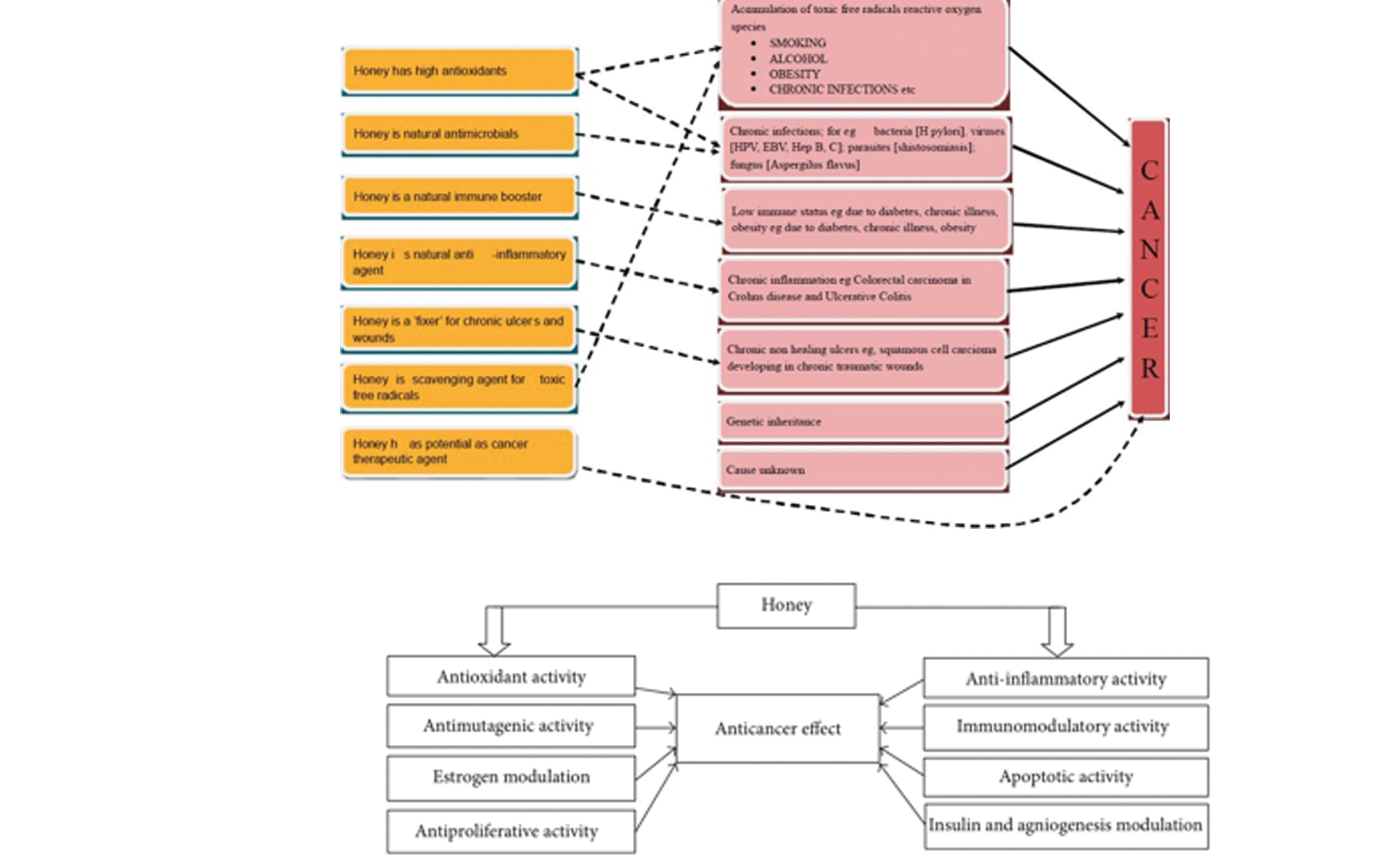 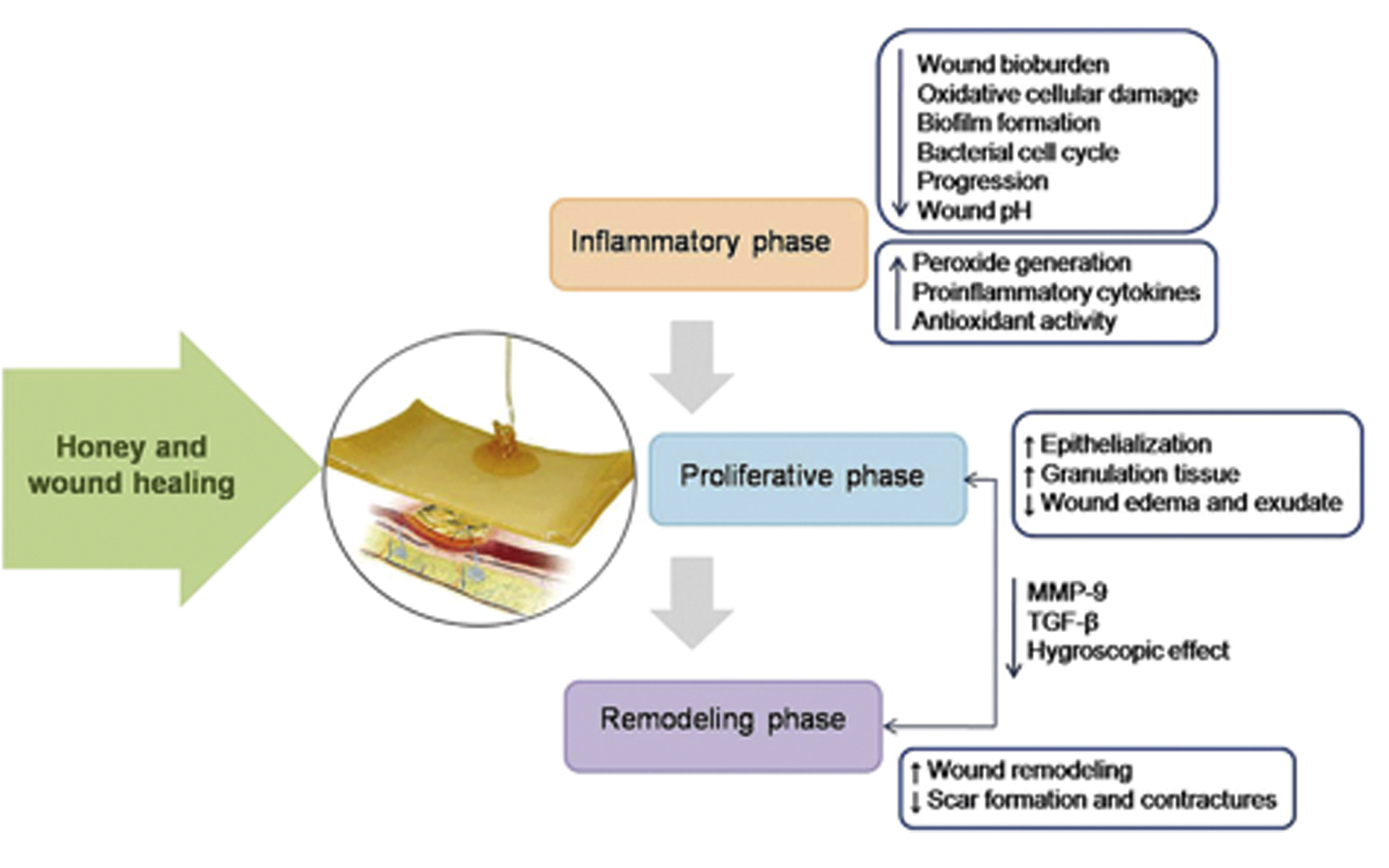