Photosystem II: Can It Be Applied in Hydrocar Technology?

Photosystem II: Can It Be Applied in Hydrocar Technology?

For hundreds of years, people believed that the sun rotated around the Earth. Similarly, people have misbelieved that the reason for photosynthesis was to convert carbon dioxide to oxygen for humans to use.

This is a common misinterpretation. So, have your teachers been wrongly teaching that photosynthesis produces oxygen? No, but there is a much greater function for the miraculous reaction we call photosynthesis (Campbell 2008).

Plants are under the constant strain of performing photosynthesis. It’s how they survive. The inputs of the reaction are carbon dioxide, water, and light energy. The outcomes are primarily glucose, then oxygen and water (Fig. 1). Both glucose and oxygen are necessary for human life. 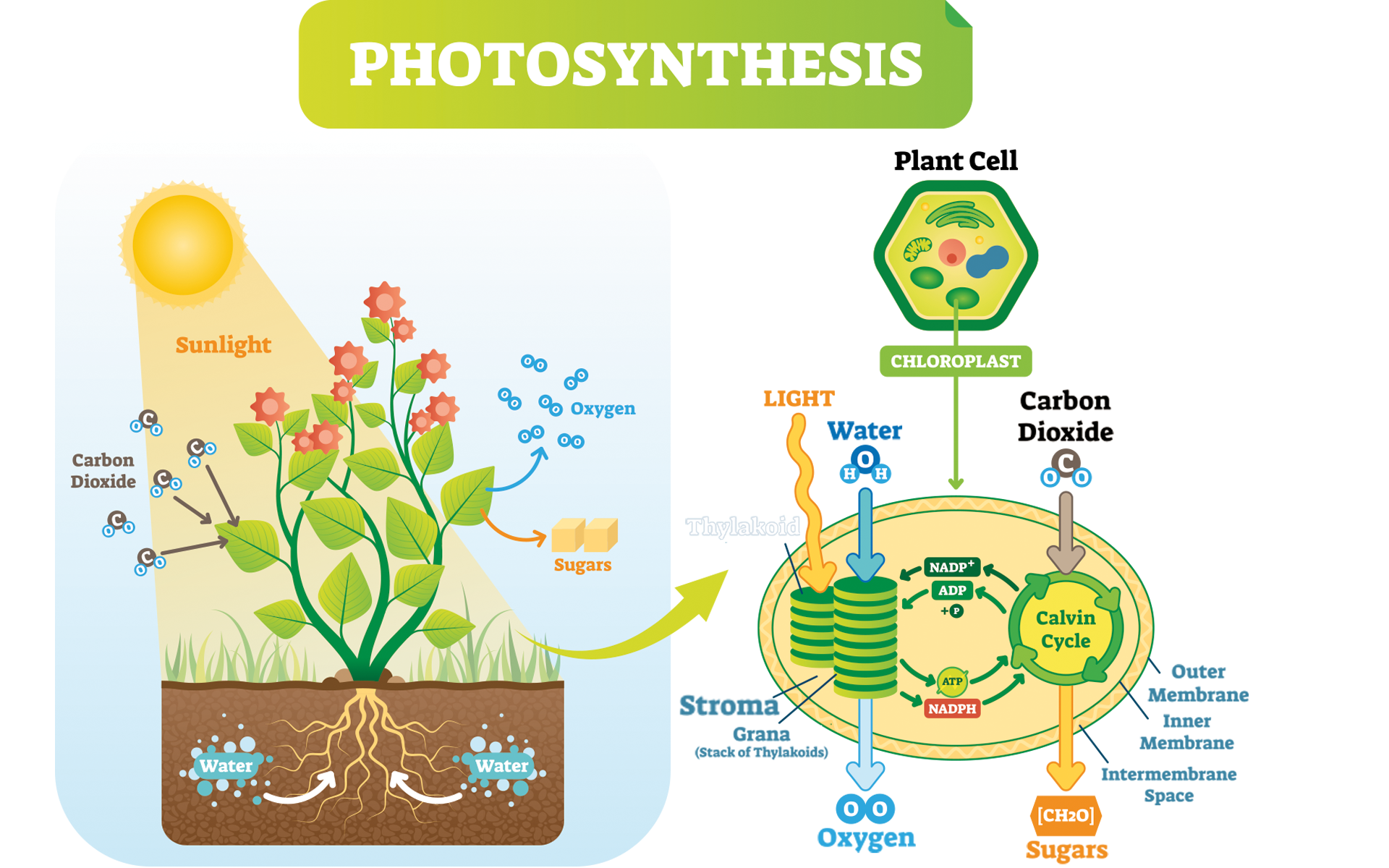 To understand this complex system, we must first understand the anatomy of a plant cell. There are many specialized organelles inside each plant cell including a nucleus, endoplasmic reticulum, vacuoles, mitochondrion, and many more (Fig. 3). Each of these organelles has a different function and photosynthesis takes place in the chloroplast of the plant cell. The chloroplast alone consists of an outer and inner membrane, granum, stroma, and thylakoids (Fig. 3) (Freeman 2011). 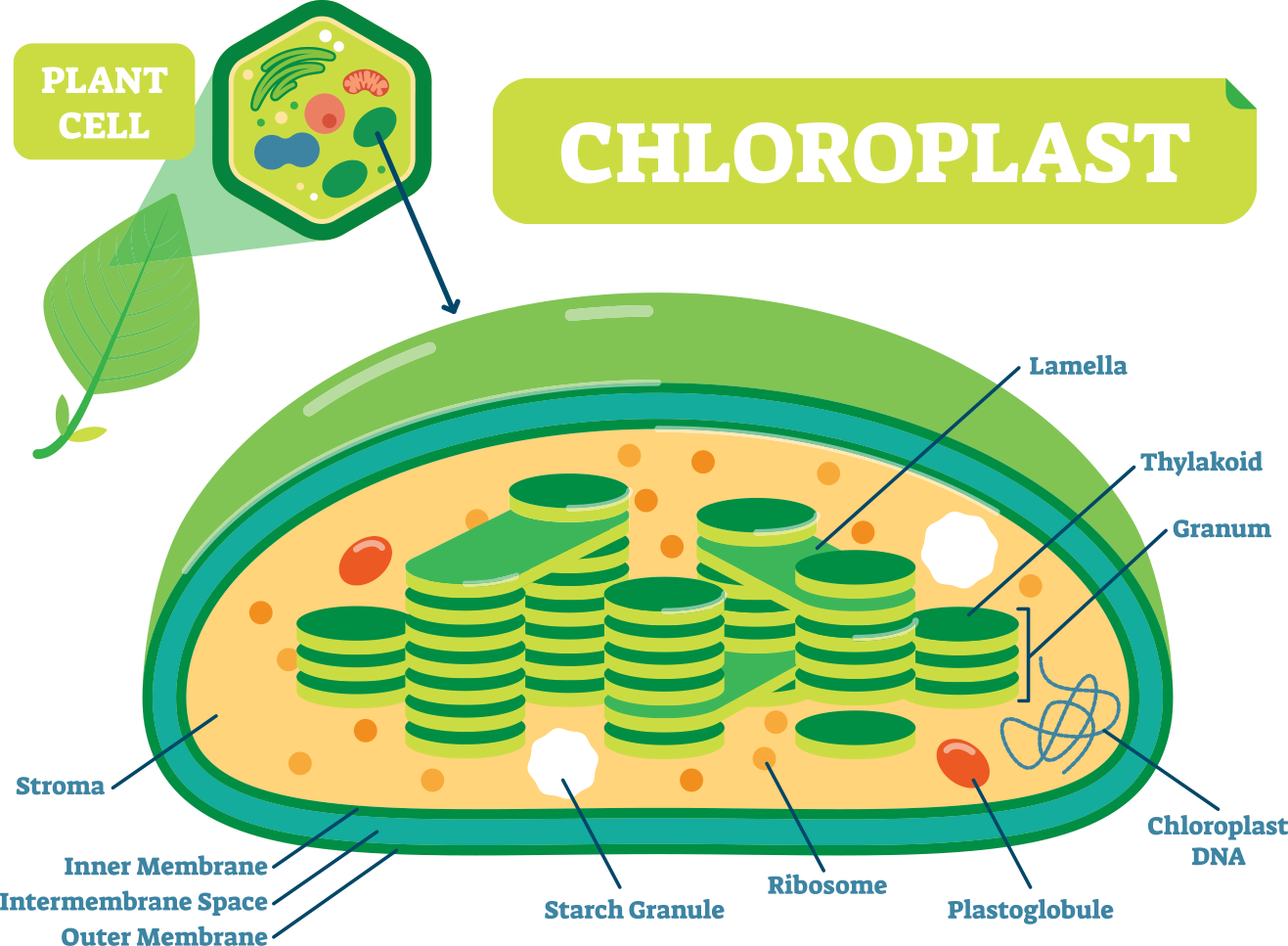 The plant’s leaves contain several mesophyll cells, which contain more chloroplast (Fig 4). Each chloroplast has many granum, which are stacks of thylakoids. All of these are floating in stroma, a type of connective tissue. These three structures are enclosed within the two membranes. Products and reactants enter and leave the cell through the stomata, which are at the leaf surface. Light reactions take place in the granum, while the Calvin cycle takes place in the stroma. Light that hits the granum is absorbed (Freeman 2011). 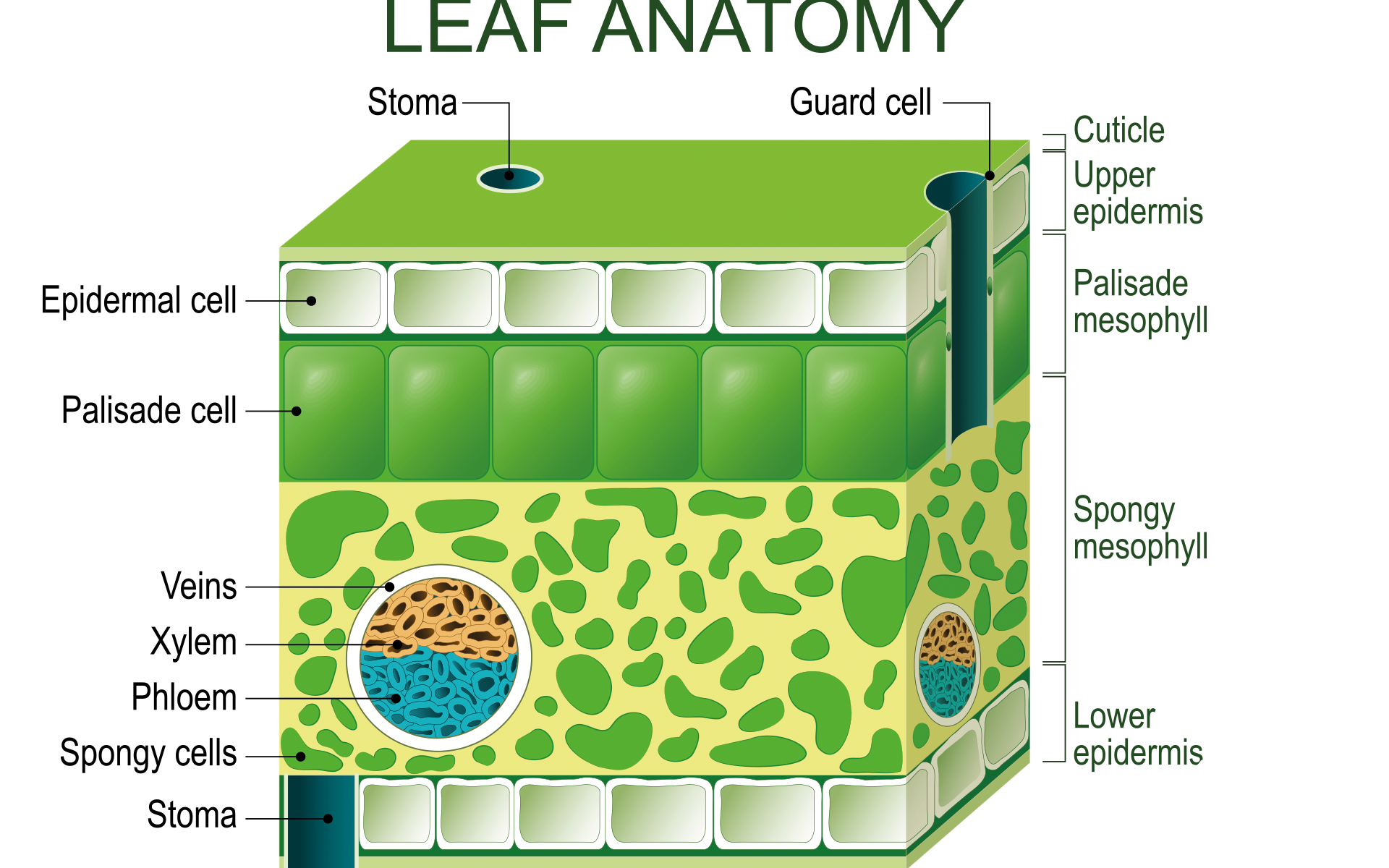 “the cleanliness, purity, and luminosity in this palace of the world arise from a continuous, wise, and diligent cleaning.” Bediuzzaman Said Nursi

The light that hits the granum is part of the electromagnetic spectrum. Photosynthetically active radiation is also identified as visible light. Visible light consists of wavelengths from 400 – 710 nm, in the colors indigo, violet, blue, green, yellow, orange, and red, respectively. Longer wavelengths contain lower energy, while shorter wavelengths contain higher energy. The granum absorbs all of this light, while reflecting the middle of the spectrum: green. This is why we see plants as green, unless a different color is reflected (Campbell 2005).

The first step in this intricate reaction results from photosystem II, a transmembrane protein complex located in the thylakoid membrane. At this location water splitting occurs, which produces hydrogen (protons), oxygen, and electrons (Fig. 5). This is crucial, because the energy needed for the rest of the reaction to occur is obtained from these electrons. In addition, the waste product of oxygen is released for humans to use (Pushkar et. al. 2008).

It is ironic that one “waste” matter, which is called so by looking at the chemical reaction, can actually be the most important component for our survival.

The details of photosynthetic oxygen evolution via light-dependent reactions are still unclear, but research shows that at some point electrons from the oxidized water molecules replace the electrons present in the antenna complex. First, a photon, or a particle of light, hits the antenna complex (P680) in the thylakoid membrane. Here, the energy is transferred to nearby pigments until it reaches the appropriate compound - pheophytin. Next, this energy is used to transfer the electron isolated from water to pheophytin, where it will be transferred again to the cytochrome complex via the electron carrier plastoquinone. The cytochrome complex acts as an electron transport chain, connecting photosystem I to photosystem II, by using a proton gradient to produce more energy in the form of ATP, as well as releasing oxygen molecules as a byproduct (Govindjee 2000).

If engineers could utilize the electrolysis of water as seen in photosystem II, they would be able to produce enough hydrogen to fuel vehicles without it being inefficient or dangerous. The two biggest issues during the development of hydrogen-fueled cars include problems with the fuel cell and production and storage of the hydrogen (Bossel 2006). A fuel cell is used to convert chemical energy to electrical energy by oxidizing the fuel. Although this device would be extremely environmentally friendly – since the products are only heat and water – it is very expensive to manufacture and very sensitive. For example, temperatures must be kept at very high heat, sometimes up to 1000° C, which is very ineffective for many consumers around the world (Smithsonian Institution 2012). The second biggest problem is finding a way to safely produce and store the hydrogen required. Since hydrogen molecules do not float by themselves in the environment, they must be produced by removing them from a pre-existing source (Suplee 2009). In addition to removing hydrogen via electrolysis, it can be removed from fossil fuel via thermolysis or from biological wastes producing biohydrogen. Storage is also a very vital concern, because if hydrogen molecules are compressed they will essentially turn into a hydrogen bomb. What is surprising is that in plants the hydrogen ions are compressed in order to construct a proton gradient, yet they don’t explode (Bossel 2006).

As nanotechnology advances we can better understand and apply the mechanism of photosystem II. Learning the details of how the light energy activates the electrons from water-splitting is extremely important for future green technologies, such as hydro cars. Hydro cars have been invented, but the efficiency is less than 25% (Bossel 2006).

McGill University, based in Montreal, conducted research this year on artificial photosynthesis in order to increase the efficiency of hydrogen based fuel cells. Their research resulted in the creation of “direct solar water splitting”, which aims to store solar energy as a chemical fuel in the same way that photosynthesis does. An industry-ready design that operates solely on sunlight and seawater has been finished (Newman 2018).

The Device is able to turn a little more than 3% of the solar energy that it absorbs into hydrogen. There is still more work to be done taking into account that 5% conversion is the required threshold in order to reach commercialization. But, it is still a sizable improvement considering previous devices reached only 1% conversion.

Tesla CEO and entrepreneur Elon Musk has made his disdain for hydrogen fuel cells known publicly on many occasions. He has called them “mind-bogglingly stupid”, “incredibly dumb”, and “fool cells”. Musk argues that it more efficient to simply use electricity to charge batteries instead of using hydrogen.

Tesla has been busy with its own innovations. They unveiled their new Tesla Semi and Tesla Roadster on November 16th of last year to the surprise of many. Tesla made some bold claims around its new cars by arguing that the Roadster will be the fastest-accelerating production car in the world and that the Semi will deliver more range for an even lower price. However, a report by Bloomberg argues that Tesla will not be able to fulfill these claims with the batteries that currently exist on the market and that Tesla will need to develop better ones in order to do so.

Unlike Tesla, international auto companies such as Hyundai and Audi are making their own big advancements in hydrogen. The two firms made a deal in June of this year to allow the sharing of all of their intellectual property and components within each other. The goal is to boost advancements and research in order to catch up with electrical EVs, the likes of which Tesla is excelling with (Locklear 2018).

One small startup in Wales is doing its best to make a difference as well. Riversimple, led by inventor and famous car aficionado Hugo Spowers, claims to be “the only independent hydrogen car startup in the world.” They currently have one model, the Rasa, that is still in its prototype phase. But the car’s statistics can compete with that of Ford’s Fiesta, Toyota’s Mirai, and Tesla’s Model S. Spowers believes heavily in the potential of hydrogen: perhaps Riveredge’s Rasa will make a dent in the market once the Rasa is released for production.

Advancements continue to be made in hydrogen research by popular universities on a consistent basis. On June 16th, the University of Maryland discovered a way to increase the max capacity of hydrogen fuel cells by utilizing aggressive electrodes. Hydrogen cars are currently rare to find and difficult to produce, but it could be entirely possible that within the next years that they become much more commonplace on our roads (ScienceDaily).

Compared to the 100%-efficient photosystem II, created in the universe, mankind lags far behind (Ruban et al., 2011). Hopefully, as technology advances we will make better cars, as well as understand the universe deeply in every respect.