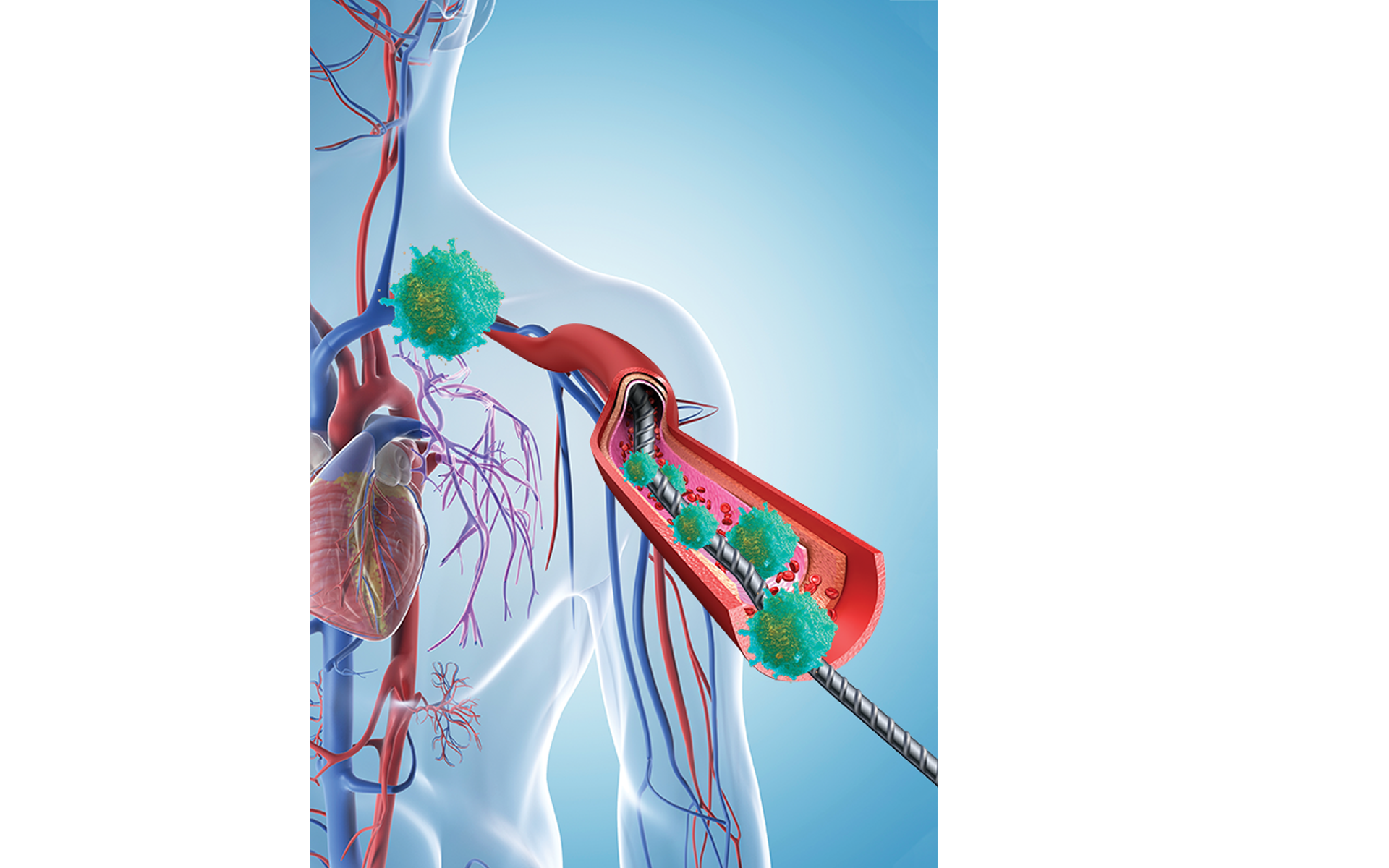 A new study showed that a magnetic wire can be used to detect hard-to-capture tumor cells, which might potentially become an effective way for early cancer detection. The wire, threaded into a vein, works through attracting special magnetic nanoparticles engineered to stick onto roaming tumor cells in the bloodstream. Circulating cancerous cells that have broken off the tumor can serve as cancer biomarkers. One major hurdle in the cancer field is that circulating tumor cells are often very scarce in the bloodstream, and it is almost impossible to catch them in few milliliters of blood samples. The new magnetic wire is the length of a pinky finger and the thickness of a paperclip.  It requires circulating tumor cells to be effectively magnetized with nanoparticles containing a specific antibody that binds to the circulating tumor cells. Once the floating tumor cell and nanoparticle are hitched, cell-magnet complexes in the bloodstream stick to the wire. Then, the wire is removed from the vein, and the cells are stripped for analysis. The technique has only been used in pigs so far, attracts from 10-80 times more tumor cells in a 5-milliliter blood sample than current blood-based cancer-detection methods. This technique could also be used to gather genetic information about tumors located in hard-to-biopsy places or to provide information about the efficacy of cancer treatments. Perhaps one day the magnetic wire may even stand to evolve into a form of treatment, capable of grabbing the cancer cells and preventing them from spreading to other parts of the body. So far, researchers have not found any signs of toxicity with the nanoparticles. Once the technology is approved for humans, the goal is to develop it into a multi-pronged tool that will boost detection, diagnosis, treatment, and evaluation of cancer therapy.

Robots can collectively plan for future

Robots are currently able to communicate and coordinate in order to make decisions and carry out simple tasks. But could robots in the future carry out missions that require them to determine which tasks to perform and in what order to perform them? For example, could robots soon save the survivors of a natural disaster? The ability to plan ahead in challenging times is a complex cognitive skill, and it typically emerges from the interactions between the individuals in a group. A new study provides evidence that robots can also collectively decide in what order they should complete their tasks in a group. The researchers have based their study on swarm robotics, a branch of robotics that applies the organized behavior of social animals such as ants in order to produce groups of robots that exhibit artificial intelligence. In this study, they have developed a swarm of robots that can perform a sequence of three actions, without knowing the correct order in advance. During the test, the robots were required to move to three different points in space, where they were to perform a simple task. Only after the tasks were completed would the robots learn whether the order was correct. To solve this problem, some of the robots gradually formed a chain between the three points in space, which the others used as a guide as they tested the various possible combinations by following instructions from the robots who made up the chain. Eventually, they determined the correct sequence by working together. This study demonstrates, for the first time, that robots are able to collectively determine a sequence of actions whose required order was previously unknown. This research paves the road to a number of future applications involving missions in which the ability to autonomously determine the order in which tasks should be completed are needed, such as searching for survivors after a natural disaster, exploring unknown or hostile environments, building structures on dangerous sites, and various applications in agriculture.

A new study involving nearly 700 adolescents showed that the frequent use of mobile phones can lead to deterioration of memory performance of specific brain regions due to exposure to radiofrequency electromagnetic fields (RF-EMF) during mobile phone use. The dazzling growth of information and communication technologies brings a dramatic increase in exposure to RF-EMF in our daily life. Several studies have been conducted to identify potential health effects related to RF-EMF, though results have remained inconclusive. Researchers studied 700 adolescents between the ages of 12 and 17 and looked at the link between their daily exposure to RF-EMF and memory performances over the course of one year. The researchers found that cumulative RF-EMF brain exposure from mobile phone use may have a negative effect on the development of figural memory performance. Figural memory, the ability to recall shapes, is mainly mediated by the right brain hemisphere and association of negative effects with RF-EMF was more pronounced in adolescents who used the mobile phone on the right side of the head. This observation suggested that RF-EMF absorbed by the brain is likely responsible for the observed associations. Other aspects of wireless communication, such as texts, playing games, or internet browsing will also cause marginal RF-EMF exposure. However, these were not found to be associated with the negative development of memory. The potential effect of RF-EMF exposure to the brain is a relatively new field and it is not yet clear how RF-EMF could potentially affect brain processes or how relevant the findings are in the long-term. To minimize the potential risks to the brain, experts recommend using headphones or the loud speaker while calling, in particular when network quality is low and the mobile phone is functioning at maximum power.