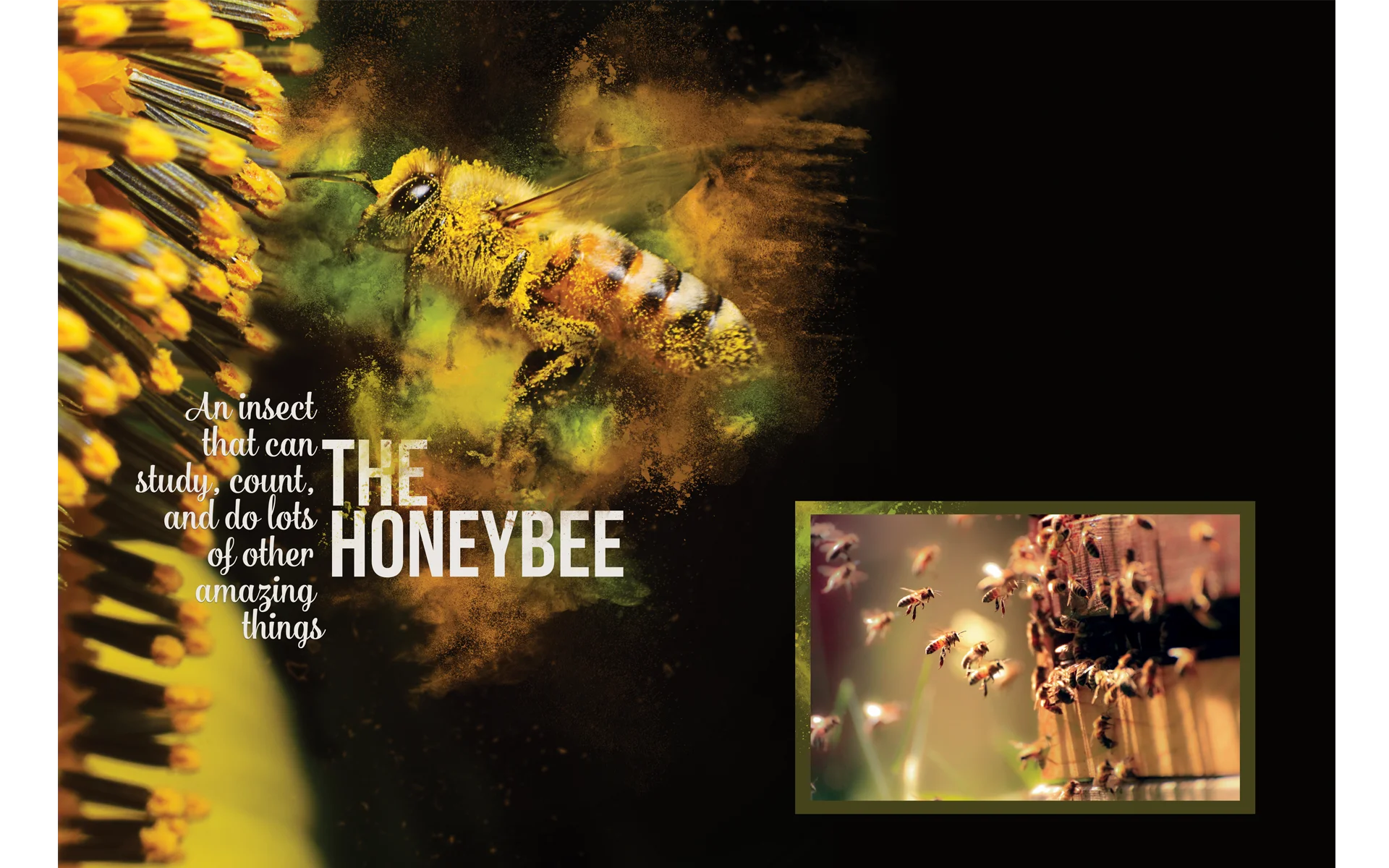 The three monotheistic religions Judaism, Christianity, and Islam extensively mention bees and honey in their scriptures. For instance, Chapter 16 of the Qur’an is titled “The Bee.” Other religions also allude to bees and honey. Primary Hindu Vedic scriptures, some as old as 1500 BC, have allusions to pollen and honey, which it calls, “the nectar of the Sun.” Srimad Mahabhagavatam, the Hindu scripture, reveres wise men in the following way: “Like a honey bee gathering honey from all types of flowers the wise men search everywhere for truth and sees only good in all religions.” One of the constituents of Panchamrita, a mixture of five foods used in Hindu worship, is honey (the others are milk, yogurt, ghee, and jaggery. And in the Buddhist festival of Madhu Purnima, honey plays an important role. [1]

Why this religious focus on bees and honey? Well, it stems in large part from the medicinal and therapeutic qualities of honey. Many people, including scientists, are not aware of the perfect design and intelligence the honeybee is blessed with.

The brain of the honeybee is about the size of a sesame kernel. It measures just one cubic millimeter in volume. Despite the small size, honeybee’s brain possesses more neurons than the brains of other insects of akin size. They recompense for their lesser brain size with bigger brain density: the honeybee’s brain is ten times more solid than the brains of mammals. They have an erudite sensory structure which gives them exceptional eyesight (including the capability to see ultra violet and polarized light) and profound senses of smell, taste, and touch. Their brains appear to have neuroplasticity which means that their brain is skilled in studying, familiarizing, and executing the same tasks, such as memory, in several places in the brain.

Though the honeybee’s brain holds less than a million neurons, compared to the 85 to 100 billion in our human brains, bees can do some astonishing things. They can count and understand intangible designs. Most superbly, bees have the capability to convey the location of flowers to other bees in the hive.

When a source of nectar and pollen is found by a searching bee, it communicates this information to other bees in the hive by doing an unusual figure-of-eight dance called the waggle dance. The waggle dance was first decrypted by Austrian biologist Karl von Frisch, who was awarded a Nobel Prize for his discovery in 1973. The dance itself is not extraordinary but it is a representative method of transmission of information. [2]

Bees get knowledge about the food source both from hearing the dance, as well as seeing it. Throughout the dance, bees pulsate their bellies. These shakings send out beats that are collected by an organ on the antennae of other bees, called Johnston’s organ. Johnston’s organs are comparable to human ears. [2]

It was not known until recently how the brain of the bee translates the data encrypted in the waggle dance. Bees usually only execute the dance in their hives; it’s challenging to make them dance in the laboratory.

Thankfully, the pulsations that were produced as a result of the waggle dance were recorded by researchers, who replicated the noises in the lab. This technique permitted them to trace which neurons were excited in reaction to the waggle dance and monitor their path in the brain of the honeybee.

Researchers detected three dissimilar types of “interneurons.” These are joining neurons that transmit messages between diverse portions of the brain. They discovered the pathway of interneurons in the portion of the brain involved with handling sound. They found that the way the interneurons turn on and off is fundamental to encrypting data about distance contained in the waggle dance. [2]

Other insects also use this mechanism of turning on and off. In neuroscience it is called “disinhibition.” For example, this is the mechanism that allows crickets to listen to the songs of other crickets and also how moths evaluate the distance from the source of a smell their antennae have collected. There is a shared neural origin in the way these diverse insects do things.

The bees perform six unique kinds of dances. They also learn and alter their conduct appropriately. When bees see a deceased bee at a flower, they alter the design of the dance they execute back at the hive, signifying they can do a risk/benefit evaluation.

These are some of the other dances honeybees perform:

The easiest dance is the “round dance.” When the bee dances around in a circle, it communicates to other bees that the food source is very close. They can go out and just smell around to find it. (They know what to smell. They can smell the scent on the rummager’s body or because she has given them a little sip.)

The intelligence of honeybees [3]

Communication is crucial to developing multifaceted civilizations. Communication permits the honeybee to accomplish such amazing things, just as language is a crucial feature in human achievements. Intelligence is vital for both communication and language. Can we say the lowly honeybee, with a tiny brain, is intelligent? It’s a complicated attribute to describe. The American Psychological Association Task Force on Intelligence, describes it as the capability “to adapt efficiently to the environment and to learn from experience.” Bees are gifted enough to do this.

Together, bee and human communications suggest brain power or intelligence. There could be a mutual brain system between humans and honeybees. Bees have proven that you don’t need a big brain to be smart. Charles Darwin recognized this and wrote in 1871, “The brain of an ant is one of the most marvelous atoms of matter in the world, perhaps more so than the brain of man.” [2]

We have learned how smart honeybees are from observing their conduct and by running experiments that prove their knowledge and recollection skills. They can recognize and recall colors and familiar sights. They are able to discriminate amongst diverse scenery, kinds of flowers, forms, and designs.

Bees can recall path particulars up to six miles, and over several days. They can visualize a map, ascertain the straight length connecting two points, and take a diverse path for their outbound and incoming voyages. They can traverse even in the dark of night.

Honeybees are able to perform numerous separate roles during their lifetime, each needing distinct talents. The youthful bees are nurture bees, nursing the family. Afterwards, they make the honey combs, creating perfect hexagonal shapes. Finally, they become hunters, discovering honey and transporting it back to the hive.

They can discern dangerous fungi from innocuous ones. They can also formulate medication (propolis) when destructive fungi are present.

Honeybees certainly have the capability to reason. They can acquire many new skills very rapidly. They have a superior ability to understand and reminisce, at least compared to other insects.

They are capable of intangible thinking, judgment-making, and organizing. They have demonstrated a proficiency at counting and an awareness of time.

The hunter bees have to do several chores that need intelligence: they must discover flowers, decide if they are a good foundation of nectar, find their return journey to the hive, and then impart this knowledge to the other explorers.

They do not utilize devices present in nature, but they can learn how to use tools. It is proven by experiments that when one bee was taught to pull a string to get a sugary reward, another bee acquired the technique just by watching the first bee. What is more astonishing is they could teach this technique to other bees.

How do honeybees make decisions?

Scavenging requires no predominant judgment making. Every bee recognizes only her own liquid source. If the food source is meager, she will swiftly abandon it and will not perform a waggle dance to guide her hive friends to that food source. As an alternative, she will observe the waggle dance of another bee who has discovered an abundant source of nectar and focuses her hunting endeavors on that source. On the contrary, if her source is abundant, she will work on that source constantly and engage other bees to join her.

Every bee formulates her own distinct cost-benefit analysis and makes a decision that influences whether or not she will forsake a source or engage other bees to it. If she vacates her source, she will shadow another bee indiscriminately; she does not match nectar sources.

Due to these transactions the whole hive has improved their foraging skills as a result of the judgments of thousands of separate bees.

The worth of a nectar source is not centered only on the sweetness of the source. It seems that remoteness from the hive, climate environments, the hive’s needs, the quantity of the source, and other relevant features are all taken into account. [3]

What if humans had a bee brain?

One can imagine how clever humans would be if our much bigger brains had the abilities of a bee’s brain. Comparing the weights of brains, a bee brain is about 20,000 times smaller than a human brain. However, they are able to do more with less.

For instance, how do bees have an internal GPS? Scientists have speculated that bees have the ability to sense the earth’s magnetic fields or the divergence of the sun’s light. A latest theory is that bees may be talented enough to perceive quantum fields or quarks. Bees appear to have some inherent sense of the sun’s movement and position. [3]

An international team of researchers has discovered that even a lowly honeybee can differentiate between and remember different human faces. “The more we study these creatures, the more we find they have abilities like ours,” says insect-vision researcher Professor Mandyam Srinivasan of the Australian National University in Canberra. “From bees to wasps, spiders and even sheep, other animals have proven they can not only recognize our faces, but they navigate mazes, match objects and shapes and even associate smells with previous experiences. Sometimes I wonder what we are doing with two-kilogram brains,” ponders Srinivasan. [4]

Human beings are not the only species that can contemplate intangible mathematical ideas like nonexistence. That the number zero is less than one is understood by some other animals. It has been known that dolphins, African gray parrots, and primates also understand the idea of “zero,” but researchers were astonished to find that honeybees also understand this idea, bearing in mind the insects' minute brains, according to a report from RMIT University in Melbourne, Australia. “If bees can perceive zero with a brain of less than a million neurons, it suggests there are simple, efficient ways to teach AI (Artificial Intelligence) new tricks,” Adrian Dyer, an investigator at RMIT University said in the report. [5]

The honeybee is a lowly animal that is still recognized by many religious scriptures. The honey it produces has many medicinal and therapeutic values. The intelligence of the honeybee, with its tiny brain, is astonishing. And yet, we should reflect that however remarkable the honeybee’s brain is, the human brain is millions of times more complex.