Under the Shade of Tranquility: My Meeting with Fethullah Gülen 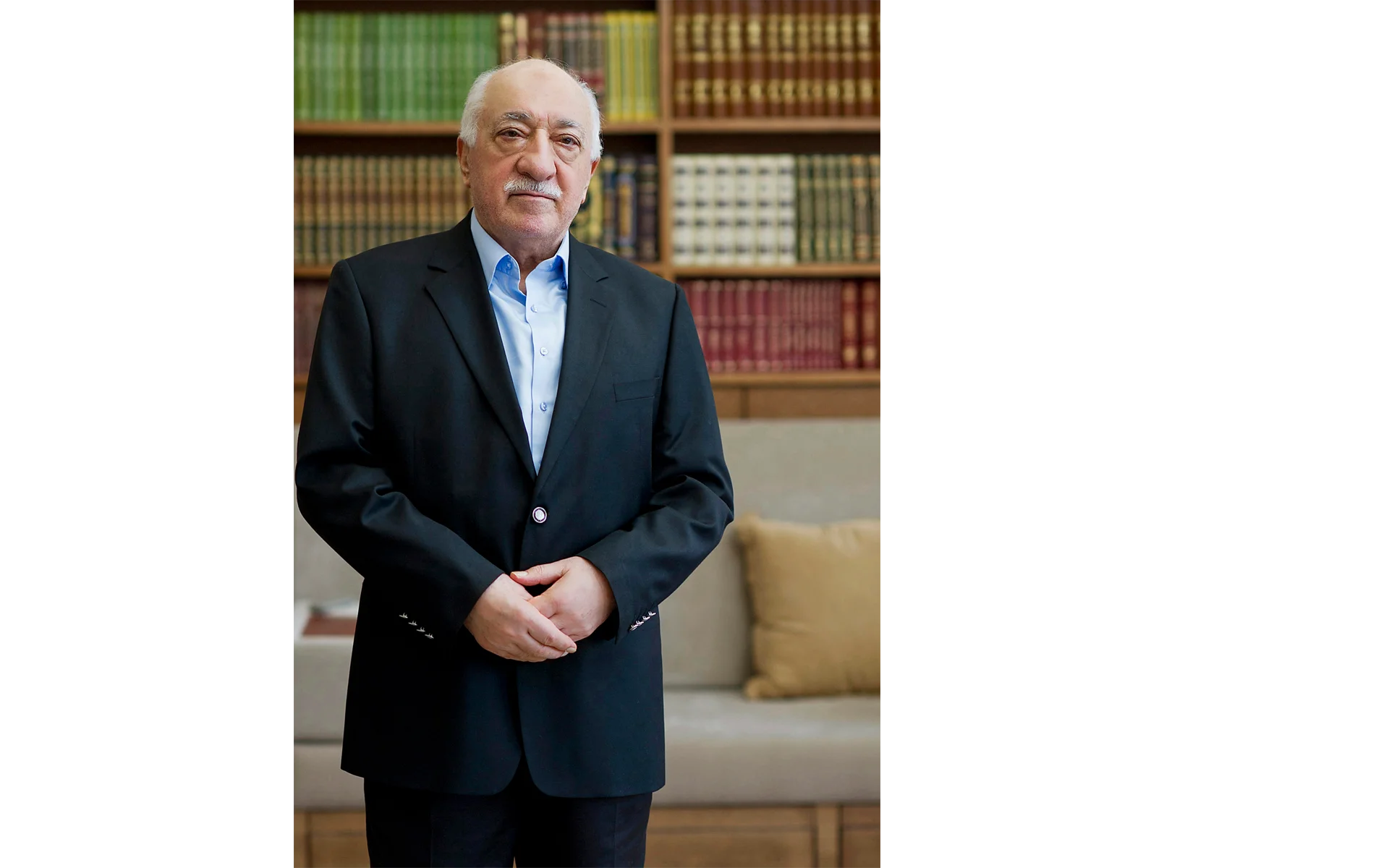 No concept is more central to Islam than the concept of peace. From our origins, to how we are to live in this world, to our return to Allah – every milestone in the life of man is associated, in the Qur’an, with peace.

The place where the first human was born is the garden: “And we said ‘O Adam, dwell, you and your wife in the garden’” (Baqara, 35). And a garden, above all else, evokes the quality and fragrance of peace.

In fact, even the name of our faith, which Allah has chosen for us, is related to peace: “… and I have chosen for you Islam, as a religion (Ma’idah, 3). Literally, Islam means the way to peace. Not the way of peace, but the way to peace, denoting the idea of action and effort, through which humanity enters into the fullness of its being.

This is the way of your father Abraham. God named you Muslims previously… (Hajj, 78)

Allah describes His guidance in the Qur’an as “pathways”; if humans follow them, they will be led to peace:

“…by it (the Qur’an), Allah guides those who seek His pleasure, along the pathways of peace” (Ma’idah, 16).

This state of peace we enter into as Muslims is one we are asked to maintain, even under the direst of circumstances, such as being provoked to anger: “And the servants of the Merciful are those who walk on the earth with humility, and when provoked to anger by the ignorant, respond with peace” (Furqan, 63).

The first sentence of the first sermon of the Prophet Muhammad, delivered when he first arrived in Medina, was: “O people, spread peace among yourselves” (Sahih Muslim). And we are told in the Qur’an that as the righteous meet Allah, their greeting will be: peace (Ahzab, 44).

Chestnut Camp Retreat Center, the 25-acre complex where Mr. Fethullah Gülen has lived since 1999, is nestled in the Poconos mountains of rural Pennsylvania. It reminds one of a large garden, evoking peace, quiet, solitude, and serenity.

I recently visited Mr. Gülen at this camp. As we arrived at night, the “garden” was bathed in the serene light of the moon, beautiful and soft, inviting and welcoming. My first thought was, “this is a place where one can really be alone with God.” My second thought was, “this is the place the 19th century English poet John Clare was searching and longing for in his poem, “I Am”:

I long for scenes where man has never trod;
A place where woman never smil’d or wept;
There to abide with my creator, God,
And sleep as I in childhood sweetly slept:
Untroubling and untroubled where I lie;
The grass below, above the vaulted sky.

My first day at the retreat was split between two delights dear to my heart, prayer and solitary meditation. We rose for the 4 am group tahajjud prayer, which was both a surprise and a joy. Islam mourns the loss of this beautiful practice.

May this example spread, and may it remind Muslims that it was through this very practice that Allah promised our beloved Messenger the loftiest and most exalted of stations, Maqaman Mahmudaa, the station of praise and glory to intercede for humanity on the Day of Resurrection (Bukhari Vol. 6, 242): “And at night (O Prophet), rise up and offer the tahajjud prayer. It may be, that through it, Allah will raise you to the station of praise and glory” (Isra, 79).

It is the flame of this blessed practice, pregnant with unfathomable divine blessings for individuals as well as for the Ummah, that Mr. Gülen, affectionately called Hocaefendi (beloved teacher) by his students, has kept burning.

The tahajjud prayer was followed by a time of private meditation, quiet reflection, and reading of the Qur’an until the time for the Fajr prayer which was offered in congregation. After this prayer and the heart-felt remembrance of Allah which followed it, we retreated to our rooms. I later left a note for a fellow traveler in which I wrote: “This place is an alarm clock for the soul.”

At Chestnut, it often felt like time stood still. The peace and serenity of the surroundings, the fragrance of the trees and the soil awakened to life by the early morning mist … all of this filled the awakened heart with tranquil awe and returned me back to my Lord. Standing outside and watching the birds claim the trees of their choosing, I remembered the words of George Bernard Shaw: “The best place to seek God is in a garden. You can dig for Him there.”

This atmosphere of serenity and peace was even more palpable when, following the Maghrib prayer, I was received by Mr. Gülen.

He sat peacefully, like a man from another time. As I walked towards him, he slowly rose to his feet to greet me. We shook hands, quietly. It was a meeting of hearts in the house of the holiness of silence. I was immediately struck by the strong feeling of the pervasive presence of God in the room.

Fazkuruni, Azkurkum – Remember Me (O human being) and I will remember you. (Baqara 152)

Remember me in your thoughts, words and deeds, Allah says to humanity and, as a result, I will fill you and our space with the mystery of my presence.

After greeting Mr. Gülen, we both sat down; for a brief moment the whole room, and all the people in it, fell still and into a comfortable silence.

Mr. Gülen welcomed me and, through a translator, spoke of being aware of and appreciating the letters I had written to defend him as well as the Hizmet schools in Senegal. I spoke to him of the significance of his words and actions as models and examples for the Islam of our time and place. He spoke softly and slowly, his words born between two silences. Aisha (RA), the wife of prophet Muhammad, said of him that he was the most silent of people (asmatan-nas) and that “he spoke so slowly and so deliberately that you could count his words, if you wanted to” (Sahih Muslim).

In all of Mr. Gülen’s classes which I attended that day and the one following, he never wavered from that state of peaceful bliss and serenity. I felt that I, and all those around him, were under the shade of his tranquility.

Through Allah’s grace and mighty striving, one can get to a place where one is no longer just filled with peace. One becomes peace itself.

One daily practice of Mr. Gülen’s community, which he insists on attending despite being in poor health, and which moved and touched me very deeply, was the daily community gathering in the big meeting hall, where they silently pray for all the suffering Muslims around the world – and beyond that, for all of humanity that suffers. I travel extensively around the world and have never seen this practice so formalized. I do not remember ever feeling the presence of God so strong, as when I sat in that gathering across from Mr. Gülen, silently praying. God is always with the suffering from among His creation.

During one of the classes, tea was brought to Mr. Gülen on a tray, along with small cakes. He put one sugar in the tea, stirred it with a spoon, and had it sent to me across the room. An act of pure grace and elegance, reminiscent of the beauty of manners of Allah’s beloved, peace be upon him. I closed my eyes and for the duration of the class prayed fervently and ceaselessly for Mr. Gülen. “Can the reward for beauty, be anything, except beauty in return?” (Surah Rahman, 60).

The day I was leaving, at the end of his class, he walked towards me and stopped, inquired about my time of departure, and prayed for a safe journey. He gave me many gifts, including a signed book; it told me that we also met, in the tavern of the human spirit.

As I left his presence and walked back to the house where I was staying, many thoughts flooded my mind. I remembered all of the negative things that have been said and written about him, and how starkly they contrasted with his peaceful presence and message. I saw and felt in him the harmlessness of a dove, a lover of peace and truth who has transcended the ages; a poet of God.

He challenges his students to think at his level. He sees humanity’s highest potential and has dedicated his life to seeing the children of men reach that potential.

As our car drove slowly out of the Chestnut Retreat Center, I once again closed my eyes and said a silent prayer of peace and safety for him.

It was my way of saying good-bye to one of humanity’s greatest friends.