Dawn upon Dawn – Once upon a Time 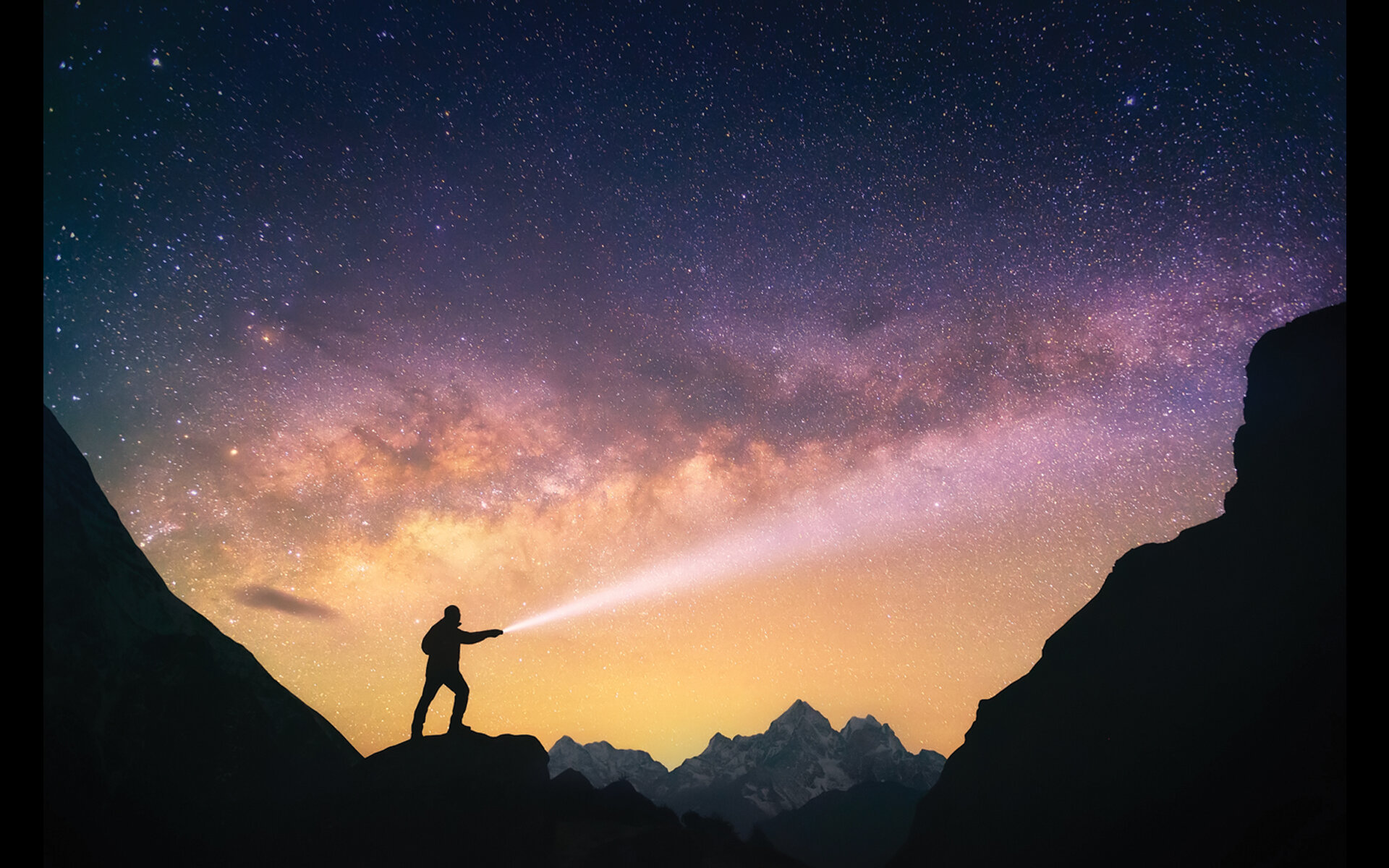 In an era when many parts of the world were defeated by darkness, our horizon was everywhere emblazoned with colors, and the festivals of dawn came one after another. At breakneck speed were the heralds of light, with brightest torches in their hands, calling the people to revival in every land. Those to whom they drew near found new life, as though having felt the breath of the Messiah, and the lands through which they passed turned green, as though Al-Khidr had stopped by. With one eye on this world and one fixed upon the Hereafter, these entrancing countenances were turned to Divine whilst amongst the people. Their minds and hearts were joined hand in hand in this worldly adventure. With those magical travels sometimes here and sometimes beyond, they experienced a separate festival each day.

The firmaments were interwoven and converged with this world. Our cities and villages were like the layers of the heavens. We imagined journeying across these heavenly layers as if on land, from continent to continent. We were like children as our days and nights passed with the sweetest of dreams. We felt our existence anew with each dawn and sunrise, and we returned to life all over once more. Breezes of Paradise forever blew in our horizon of thought, and it was as though we heard the flutter of angelic spirits above us. We lived an entire past intertwined with this day, and this day with the near and distant future. At a time when our contemporaries writhed in different crises due to the narrowness of the present, we perpetually breathed an air of tranquility and joy, as though strolling across the spacious and relief-laden slopes of Paradise.

Once upon a time, our magical world was like the wellspring of life of the earth and the heart of the heavens.

In this world forever agleam with lights from eternity were our villages and cities dazzling with their celestial profundities and our glistening homes resembling a bridal chamber. In this world, the rose was reconciled with the thorn, the cat side by side with the pigeon, the nightingale friends with the magpie; everything oscillated so deeply while singing the song of eternity. In everything we saw and heard we straightened ourselves and rose up once again: as if having received the sound of the Trumpet of Resurrection, took to walking toward the Divine at an even greater pace, and felt as though our roads reached all the way to the heavens. Especially for the luminous souls who have attained the happiness of walking along the trajectory of a life of the heart and spirit, living in this world was a privilege, so to speak.

With the sounds of the call to prayer, a call to eternity at each dawn, we experienced a new resurrection and felt the faith with the freshness of the day it was first revealed from the heavens, feelings refreshed, hearts wakeful to the utmost, and our spirits neck and neck with the angels. It was as if we could see the smiling countenance of the Infinite Light, peace be upon him, just a few steps ahead and stood dazed with reverence. Our thoughts were as profound as to project to the beyond, evaluated life with the gravity of the angels, and spent every moment like hearts familiar with God.

Our magical world back then was like the wellspring of life of the earth and the heart of the heavens; this heart constantly proclaimed the Almighty with its rhythmic beating, and with its living and inanimate accessories it offered us unimaginable surprises reminiscent of the beauties of Paradise. Everywhere was aglow; looking to our surrounds, we felt the dazzling magnificence of the world beyond in the face of existence and creation.

Our nights always passed with the luminosity of a “daybreak” while our days were as bright as the slopes of the highest level in Paradise. The atmosphere hanging over us and the natural landscape it encircled were refulgent, as was spring, summer, autumn, winter, and indeed all creation. In this colorful climate, we always asked for that which surpassed our will by means of our supplication and entreaties and incessantly mumbled utterances that would please Him. With feelings alive and our hearts quivering like the lowest note struck, we always presented to Him melodies with a different tune each time! The lamentations breaking loose from our hearts from time to time and rising from our bosoms ascended like the heartfelt cries of Prophet Jacob, and the winds blew with the fragrance from the shirt of Prophet Joseph, peace be upon them. All around, the sugar-sweet words were woven with pure feelings, and accompanied with deeds of righteousness. These “good words” (Qur’an 14:24) rose to the best of their “dew points,” and then poured back upon us as another form of Divine favor.  Those days were the days promised to the believers, those places were places from the Ka’ba and Mount Sinai, and we were the auspicious inheritors of the earth.

Then, the day came when the ruthless assaults of the enemies combined with the disloyalty of friends, and we were no longer able to stand where we once stood. We experienced tremors one after another and thus toppled over suddenly. Who knows, perhaps if we had not been subjected to all those betrayals, this world would have continued to bedazzle until the end of time with its own particular beauty.

Then, the day came when the ruthless assaults of the enemies combined with the disloyalty of friends, and we were no longer able to stand where we once stood.

It is a great pity that in an inauspicious age, all the lights of this luminous world were ravaged, the hands holding the torches broken, the mouths speaking the truth gagged, and a group of monstrous souls sat upon our life springs. The sun no longer rose with its own color. In the shadow of the stains upon its countenance, the moon was like a poor creature, and the earth had taken on the form of an arena of savagery where malicious demons ran wild. The damage had been done and no longer were the roses with which we were familiar blossoming, nor the flowers diffusing their fragrance to their surrounds, nor the nightingales singing. Replacing the people showering smiles upon their surroundings with serenity and jubilation were dark-spirited night demons who were overwhelmed by hatred, rancor, and enmity, and dejected souls growling with wrath. It seemed as though all people of heart and spirit had dissolved into thin air, along with that luminous era. Villages and towns were abandoned and our minds were as empty of spirit, meaning, and respect for our own values, as were the plains and prairies of life.

The masses were dead on their feet as though subjected to an illusion, those holding the reins in their hands were in pursuit of a different fantasy each day, people scattering helter-skelter away from their own values, and disorder on the societal scale was experienced. There was no respect left for the family tree, nor regard for its fruit; axes hacked away at the tree’s roots and our thousand-year legacy was cast away to the scrapheap just to spite our forebears. Hypocrisy was popularized and dissension reverberated in all quarters. Deception was considered prowess and subterfuge, in the hands of its professionals, witnessed its golden age in favor of besmirching the believers. Deviators were wilier and quicker than ever before; on the contrary, many of the believers were worship-weary, service-spent, and addicts of rewards, and matters requiring patience, determination, sacrifice, and resolve had of course been entrusted to extraordinary occurrences. As a matter of fact, how many people believing in extraordinary manifestations had actually remained, God knows!

Considering our recent history, was it at all possible for us to get back up on our feet and pull ourselves together as a society facing such a degree of disarray? Were we going to be able to stand on our own feet once more as ourselves? It was very difficult to say anything positive with respect to the apparent causes; however, for believing hearts, causes were not everything. After all, what could not happen when God manifested His Favor! How many times humanity had encountered surprise springs until the present day, at the very moment when they fell defeated to sleet and snow. How many times they had witnessed “coolness and peace” (Qur’an 21:69) in the bosom of the most formidable infernos. Each and every time humanity turned to the door to which they needed to turn with faithfulness, confided and expounded their troubles to Him, the death pits in which they found themselves were transformed into ramps of elevation and at a stretch, in the very same breath, reached peaks that had hitherto appeared unattainable. Why could it not happen once more!

Indeed, no one who had turned to Him sincerely until now had ever come away empty-handed, and there were none amongst those remaining independent of Him who had been delivered. Thus, with all these considerations at the present time, our faces are darkened, but our hearts tremble. Fixing our hopes on the vastness of His mercy, confiding our inadequacy, inconsistency, and of course our helplessness to Him, we ask that He enable us to reach a fresh phase of revival with a brand-new celestial calendar and entrust our hopes and aspirations to His favor.