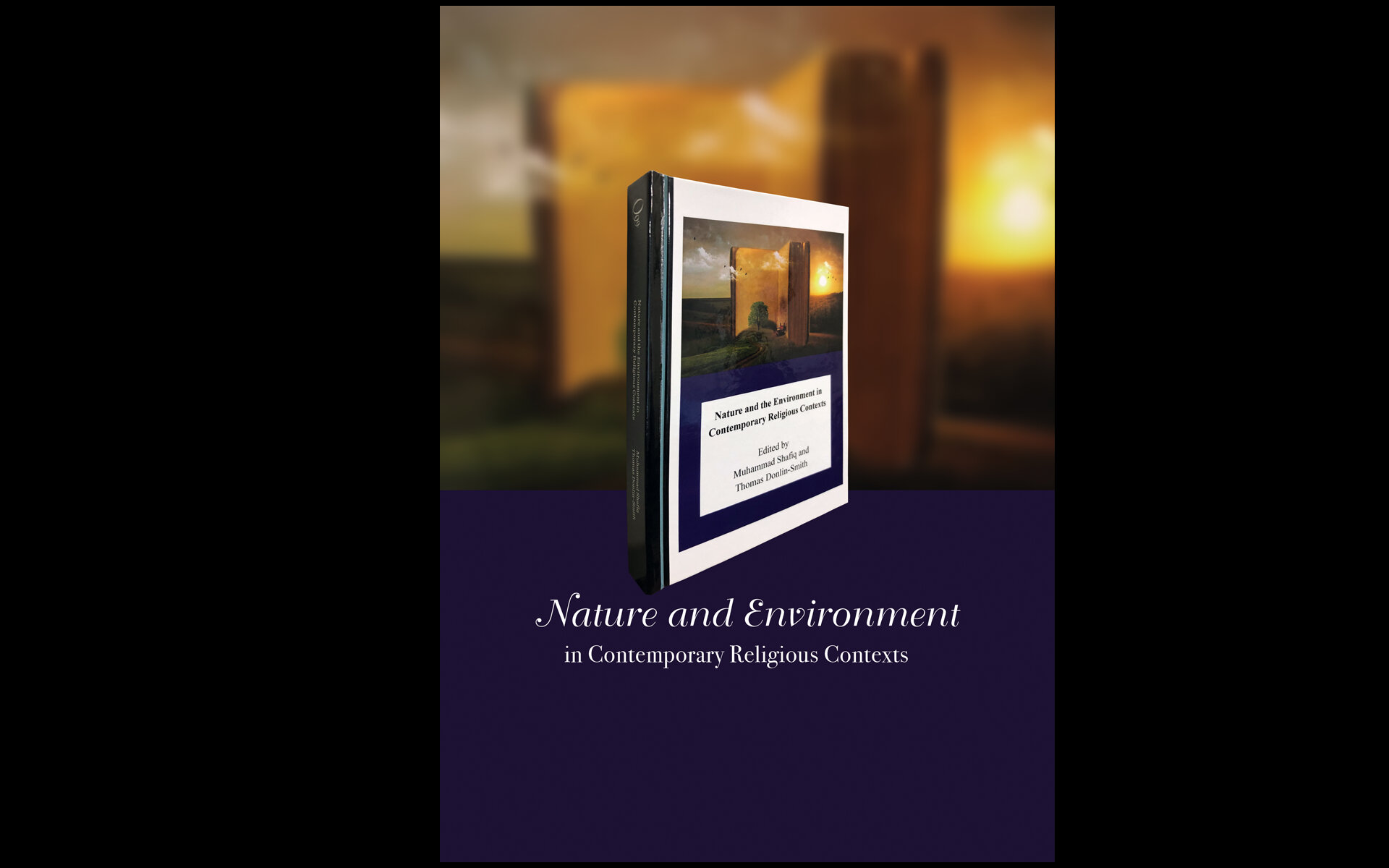 It’s no secret – or at least it shouldn’t be – that climate change is one of the most important issues of our time. Very recently, a report came out saying that the planet could be facing serious consequences of climate change by 2040 – a mere 22 years from now (“Major Climate Report Describes a Strong Risk of Crisis as Early as 2040,” New York Times, Oct. 7, 2018). At a time when many political leaders seem unable to offer meaningful solutions, hamstrung by partisanship or economics, many people have turned to faith leaders for solutions. In 2015, for instance, Pope Francis issued Laudato Si’, a Catholic encyclical devoted entirely to ecological ethics and theology.

Two scholars explore Francis’ encyclical in Nature and Environment in Contemporary Religious Contexts edited by Muhammad Shafiq and Thomas Donlin-Smith. And though Francis might be the most quoted religious figure in the collection, Shafiq and Donlin-Smith have gathered 17 peer-reviewed essays submitted to a conference on nature and the environment in religions, hosted by the Hickey Center for Interfaith Studies and Dialogue at Nazareth College. Taken together, they offer an inspiring and hopeful look at how religions and faith leaders are approaching humanity’s biggest challenge.

Although Francis has been one of the loudest and most prominent religious voices urging a new ecological theology, I want to look at some of the lesser known voices who are advocating for interdisciplinary and interfaith solutions to climate change. For example, Hussam S. Timani writes compellingly about how secularism and modernity – and the so-called advances of contemporary science – have actually led to the on-going ecological disaster. As he lays out in his paper “Modernity, Secularism, and the Exclusion of Nature: Why Religion Matters,” he believes that answers might be found in the ecological consciousness commanded by religion, and looks specifically at Christianity and Islam.

Timani is not just concerned with the environment, though. He believes that Western modernity has estranged man from nature – and from meaning. It is this lack that has led humanity to so voraciously consume the planet’s resources, searching for a higher purpose that has been lost as more and more people have moved away from faith.

He sees potential solutions in both Islam and Christianity. Of Islam he writes, “Being a servant of God, man must preserve and protect what God has entrusted him with and restrain from exercising dominion and power over nature” (p. 41). And, like many scholars of a more compassionate, thoughtful Christianity, Timani finds hope in the words of Richard Niebuhr, who “spoke of ‘loyalty to the community of life’” (p. 49).

Timani also engages with critics of religion – namely, Todd Jared LaVasseur’s critique that all major religions are anthropocentric, or the belief that humans are the most important creature. While true, Timani believes that religions call for a conscientious anthropocentrism, as opposed to the reckless consumption of resources espoused by Western materialism.

In his essay, “Dietrich Bonhoeffer as an Ecological Theologian,” Jamison Stallman also places the blame for our current ecological crisis on Western materialism. He examines climate change and a possible way forward through the theology of Dietrich Bonhoeffer, the early 20th century Lutheran theologian, and the writings of environmental ethicist Larry Rasmussen.

In Sanctorum Communio (literally “a congregation of saints” and also the title of Bonhoeffer’s doctoral dissertation), Bonhoeffer asserts that, in Stallman’s words, “I become an individual when I recognize that there is a self-conscious You” (p. 90). It is only through a person’s relation to other humans that they can have any identity at all. Community is necessary for there to be an individual.

Of course, as we all know, any time two self-conscious “I”s come into contact, there will be an ethical tension. But this, Bonhoeffer asserts, is how person-hood and community are constantly being shaped and re-defined: by managing such ethical barriers.

Larry Rasmussen’s view of humans as “biosocial” is similar to Bonhoeffer’s insistence on community. But he extends the idea further, beyond just a community of Christ, to include the entire ecosystem. Western materialism, Rasmussen believes, has detached humanity from its ecological “niches” – that is, the systems and communities within which humans live (this is referred to as “niche theory”). Western materialism has moved humanity to a place above these systems, not of them. It is only by conceiving of ourselves as of the ecosystem – and in relationship with it – can we begin to repair the damage we’ve done. We cannot exist but in relation to other creatures and systems.

Though most of the scholars are writing from the perspectives of the three Abrahamic faiths, three authors (one from each section of the book) explore other faiths and their relationships to the environment.

In section one – titled “Our Human Contexts within Nature” – Tatjana Myoko V. Prittwitz writes about “A Vast Net of Interconnected Diamonds: Buddhist Views of Nature.” Prittwitz begins with a fascinating (and humbling) thought experiment, asking the reader to think about everything in their life – their clothes and food, the chair they sit on and the car they drive, the roads and planes that make transit possible – and to consider how these objects and systems were made and how many people played in role in making them. “…our existence is dependent upon billions upon billions of people, actions, and things. What we call a separate self is in fact a vast net of … interconnection” (p. 68). Despite approaching the issue from a Buddhist perspective, Prittwitz concludes something similar, albeit slightly different, to the Muslim perspective of Timani and the Christian perspective of Stallman: “Out of the realization of interdependence comes the imperative of global responsibility …” (p. 70). Prittwitz alludes to this same universality in Native American spirituality, shamanistic rituals, and Tibetan animism, suggesting that most religions, no matter how seemingly disparate, are motivated and inspired by interconnectedness.

Appropriately for section two – “Imperatives from Sacred Texts and Tradition” – Nawaraj Chaulagain provides a close reading of the Sanskrit text Devi Mahatmya (literally “The Glorification of the Goddess”). Chaulagain writes that “The cosmic order is sustained through a continuously dynamic process of creation, preservation, and destruction for re-creating…” (p. 185). Considering the current crisis, this “dynamic process” can only be seen as hopeful!

Similar to Bonhoeffer’s grappling with original sin in Sanctorum Communio, the Devi Mahatmya contends with “the eternal battle … between the good and the evil …” And from an ecological perspective, it is grappling with “the perpetual conflict between those who are part of … the ecosystem and natural order … versus those who are against it…” (p. 186). Lastly, the Hindu festival of Navaratri pays homage to the natural world (rivers and mountains are particularly sacred in Hinduism). Chaulagain calls this “ecological worship”: “The Navaratri calls for the preservation of the earth” and involves the planting of barley seeds and the use of water from sacred rivers (194-95).

Throughout the essays, two dominant approaches to humanity and the environment tend to take shape (albeit with exceptions). Whereas Islam, Judaism, and Christianity tend to situate man as “stewards” of the world, Hinduism and Buddhism often view humanity as being “interconnected” with the world.

Leocadie Lushombo explores one of the exceptions: Central African Christianity, which tends towards interconnectedness. In her piece “Mitigating Deforestation in the Congo Basin and Climate Change: The Ethic of Environmental Responsibility Based on African Spirituality,” Lushombo ties micro environmental damage to macro climate catastrophe. She cites studies showing that deforestation in the Congo Basin “causes a decrease of precipitation of about 5%-15% in the Great Lakes region [in the US]…” (p. 275). Deforestation of the Amazon and Central Africa are causing droughts in the breadbasket of America. Meanwhile, it is leading to deluges in the Arabian peninsula. Such deforestation can be directly tied to the ills of colonialism and globalization. It’s also exacerbated by an influx of refugees – and as climate change worsens, it will lead to even more refugees.

Resistance to the dominant ideologies of Western exploitation and capitalism can be found in African spirituality, including African Christianity. Lushombo quotes Magesa, who wrote “What the African religious world view emphasizes, therefore, are relationships …” (p. 281). In traditional African practices, she finds hints of the “humanity as caretaker” worldview mostly associated with the Abrahamic faiths. She writes, “In order to maintain harmony with nature, it is a moral obligation to function as God’s stewards … and not as rulers” (p. 286). Lushombo sees solutions to over-logging and resource exploitation in the ideologies of both interconnectedness and stewardship.

The other essays in the book support this conclusion. Whether a faith views humanity as a steward of nature or interconnected with nature, is immaterial. All faiths believe that taking care with the natural world is critical to humanity’s future – in this world and the next. As our species grapples with climate change triggered by capitalism run amok, all people of faith – regardless of ideology – must come together to begin healing our planet through a new theology of ecology. This essay collection, with its focus on peacebuilding and interreligious dialogue, would be a good starting point.