There are many ongoing studies into fasting, a practice prescribed across many religions. Increasingly, there is evidence to support that intermittent fasting is beneficial to human health.

The opposite of fasting – overeating – has been revealed to be a major culprit in many illnesses, including cancer, obesity, and heart disease.  For many years, the medical consensus was that fasting, i.e. prolonged hunger, too, could have deleterious effects on the human body. From kidney failure to loss of muscle, fasting was believed to be harmful – thus calling into question the benefits of this widespread religious commandment.

People of faith – including Muslims – have long believed that God wouldn’t recommend a practice that was harmful to the body. The hardships and troubles that accompany a religious practice are not too extreme for people aware of their servitude to God: they regard their trials as a testament of their faith. Part of that faith is the certainty that God wouldn’t recommend a harmful or unbearable practice.

In this article, we will share with you two unknown benefits of fasting that have been recently discovered.

There is a substantial body of evidence showing that staying hungry during certain periods of the day heals the body’s metabolism, hastens loss of fat, decreases oxidative stress,* and improves the functions of the tissues that make up various organs including the liver, the intestines, and the brain. The first of the two new discoveries about the underlying processes, however, provides a missing piece of the puzzle by helping us understand the incredible changes hunger triggers in stem cells.

Researchers at MIT, Duke University School of Medicine, and Whitehead Institute for Biomedical Research in Cambridge published an article recently on stem cells, indicating that part of stem cell’s mystery could lie in the oxidation (burning) of fat in the mitochondria [1]. Omer H. Yilmaz and his fellow researchers found that a 24-hour fast hastens fat breakdown in intestinal stem and special progenitor cells of rats.

To run the study, Yilmaz and colleagues let the mice go hungry for 24 hours to study the state of their stem cells. They found that the functions of intestinal stem cells increased, and fat metabolism quickened, in both young and aged mice, even during early periods of hunger. They saw that the body’s tapping into fat for its energy needs maintained the health and strength of the intestinal stem cells. Moreover, they noticed that if the aged mice did not fast, they started to lose their ability to break down and use fats for energy expenditure.

The researchers obtained more interesting results as the studies progressed. It was found that a single period of hunger for 24 hours boosted renewal of intestinal cells – and the stem cell functions increased even more significantly in aged mice. Another interesting finding was that mice with damaged intestines that were fasted recovered faster than those that were fed.

“My lab is really interested in understanding how diet, in general, can be used to improve tissue function,” Yilmaz said. “One of the tissue types I study is the intestine. In my lab we study the intestine because it’s one of the largest organs in the body. It’s also a tissue that experiences rapid cellular turnover.” [2]

The intestine is lined by a single layer of cells, Yilmaz explains, that turns over every 5 to 7 days. The workhorses of the intestinal lining and this cellular turnover are intestinal stem cells. These cells must retain a high level of function or cellular health in order to replenish the intestinal epithelium on a regular basis. Intestinal stem cells are particularly important in terms of repairing intestinal damage caused by gut infections and chemotherapy, for example.

The single layer of epithelial cells needs to be renewed every 5-7 days: the aids and enzymes secreted in the intestine for digestive and absorptive activities damage cells despite the protective mucus layer, and some other cells already burst and die as they empty their secretions. Moreover, some medications, particularly chemotherapy, cause the destruction and breakdown of the epithelial cell layer. However, fast-multiplying stem cells replenish the epithelial cells. Stem cells are very active and young and have the ability to divide and multiply continuously.

“As we age, stem cells in the intestine as well as in many other tissues of the body, including in the blood and nervous systems, become less functional. We believe that reduced adult stem cell function contributes to some of the decline of function associated with old age. My lab is very interested in studying low-calorie interventions to delay this decline. As a field, we’ve known for over 100 years that low-calorie states such as fasting or caloric restriction can have positive effects on tissue health and aging. We’ve seen evidence that fasting during times of intestinal infections that lead to diarrhea may promote healing of the intestinal lining, for example.” [2]

This quote emphasizes the importance of the issue. Yilmaz adds that despite all this knowledge, the cellular mechanisms of this renewal have not been discovered, and he and his team are working to find out how fasting and hunger enable this recovery.

The researchers discovered through the experiments that the stem cell function could be brought about in hungry mice by the burning (oxidation) of fatty acids in intestinal cells. When they stopped the fat metabolism through genetic engineering, they noticed that the benefits of fasting on intestinal stem cells were negligent.

In the present dietary conditions, we obtain nearly 60-70% of our energy from carbohydrates or sugar, 20% from fats and 10% from amino acids. Yet an interesting finding revealed by Dr. Yılmaz and his research team is that we essentially obtain much greater energy from using fats once we fast. According to their experiments on mice, during fasting, the intestinal stem cells in both young and aged mice switch from carbohydrates to fats as the primary source of energy, and this shift enables improvement in stem cell functions.

It is not yet known what underlies the fat metabolism that boosts stem cell functions in response to fasting, but it is observed that stem cells work better when they burn fat. The ability to metabolize fats efficiently decreases with age.

It is likely that this hastened metabolism – encouraged by certain diets, like the keto diet, where the amount of fat ingested is raised to 70% and carbohydrate intake is limited to 5% – helps with epileptic seizures and similar neurological disorders: the ketone bodies generated during metabolism of fats are used as energy sources by the brain.

According to Dr. Yilmaz, if fasting can improve the functions of intestinal stem cells through metabolism of fats, the key is the mitochondria, the powerhouses of the cell responsible for this function. Fat metabolism, or the immediate breaking down or “burning” of the fat entering the cell, is carried out in the mitochondria. Disrupted energy generation associated with aging and decreasing mitochondria can be a reason for the brain’s susceptibility to age-related illnesses. Positive developments in brain functions can therefore be viewed in connection with the correlation between fasting and the oxidation of fatty acids.

Just like the spring cleaning in our homes, our cells need a thorough cleaning to function properly. Wrongly folded protein particles, remains of damaged organelles, broken molecular pieces, and aged cells that can no longer divide should be disposed out of our cellular structure. Fasting perfectly performs the task of cleaning these wastes and clearing the area in the cell.

“Everything has zakat (a means of cleaning), and the zakat of the body is fasting.” (Ibn-i Majah, Siyam: 44)
“Fasting is a protective shield.” (Bukhari, Sawm: 2) 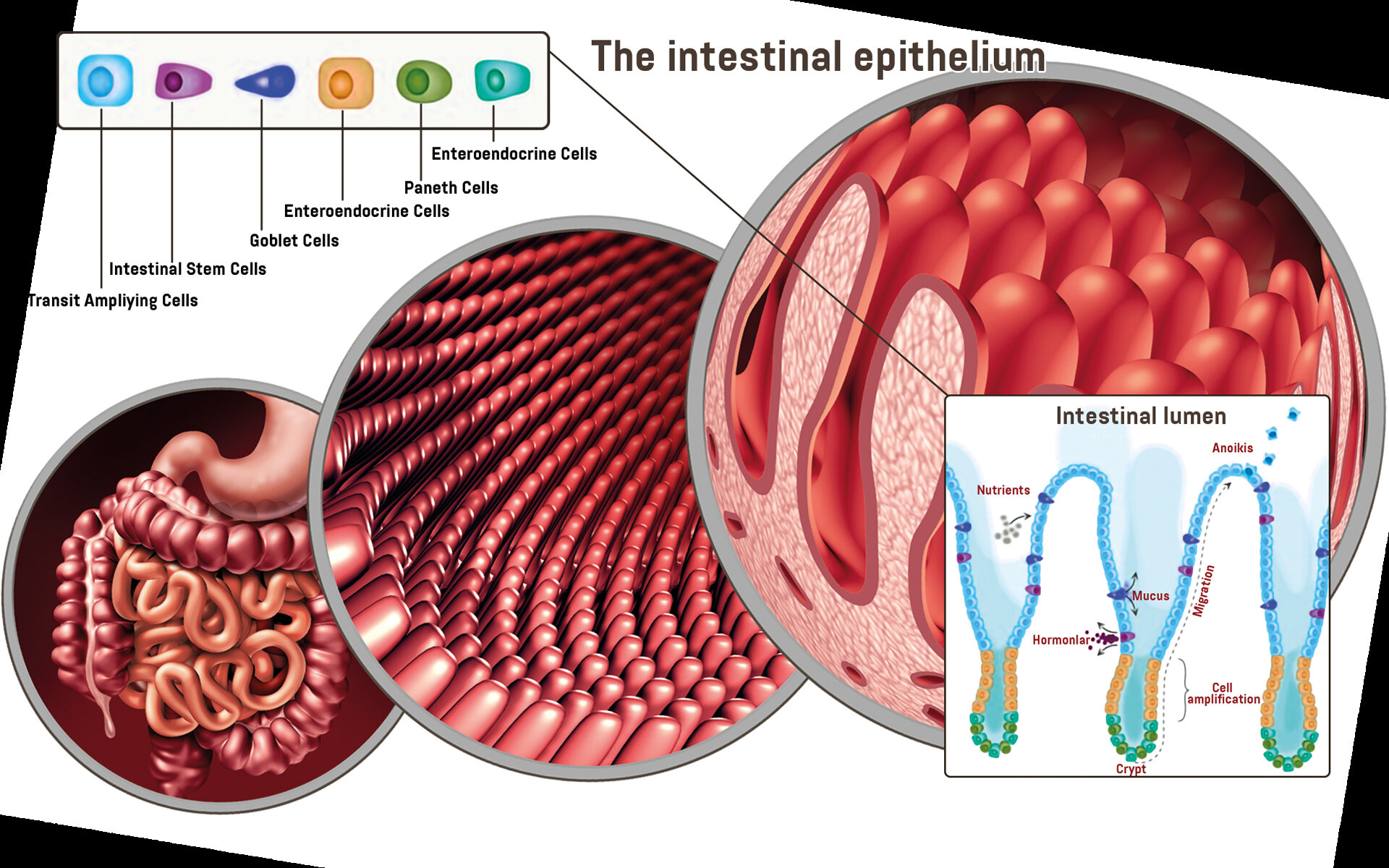 Autophagy is the compound of two ancient Greek words: auto (self) and phagos (eating). What is meant by “self-eating,” is the breaking down and recycling of protein waste and old, impaired molecules by intracellular digestive organelles called lysosomes. In this way, proteins or cellular organelles are digested and taken out of circulation. We can liken autophagy to garbage collection.

Japanese researcher Yoshinori Ohsumi’s study, which brought him the 2016 Nobel Prize for Medicine, found that the autophagy that occurs inside the cell due to fasting or starvation plays an important role in preventing ageing, infections, and tumors. If autophagy breaks down, many illnesses may be triggered, including cancer. Conversely, if autophagy activity is regular, tumors may be suppressed – depending on the stage of development and type of tumor. Cancer research has long focused on channeling these autophagic activities. Restriction of food intake through fasting shows promise: it may protect normal cells while triggering autophagy and thus increasing the effect of cancer treatments. Autophagy might offer solutions or treatment options for other illnesses, too, including inflammatory diseases [3], neurodegeneration [4], metabolic and cardiovascular diseases [5], obesity [6], and metabolic disorders.

Preclinical studies have shown that dietary restrictions by fasting contribute to the increase of a person’s lifespan and slow the development of age-related diseases such as cancer and neurodegenerative and cardiovascular diseases [7].

* Oxidative stress: The damage caused as a result of excessive proliferation of free oxygen radicals released from foods that spike blood sugar (with high glycemic index) as metabolic waste. A good example of oxidative stress is the browning of certain foodstuff such as apples, bananas, etc. sometime after they are peeled.