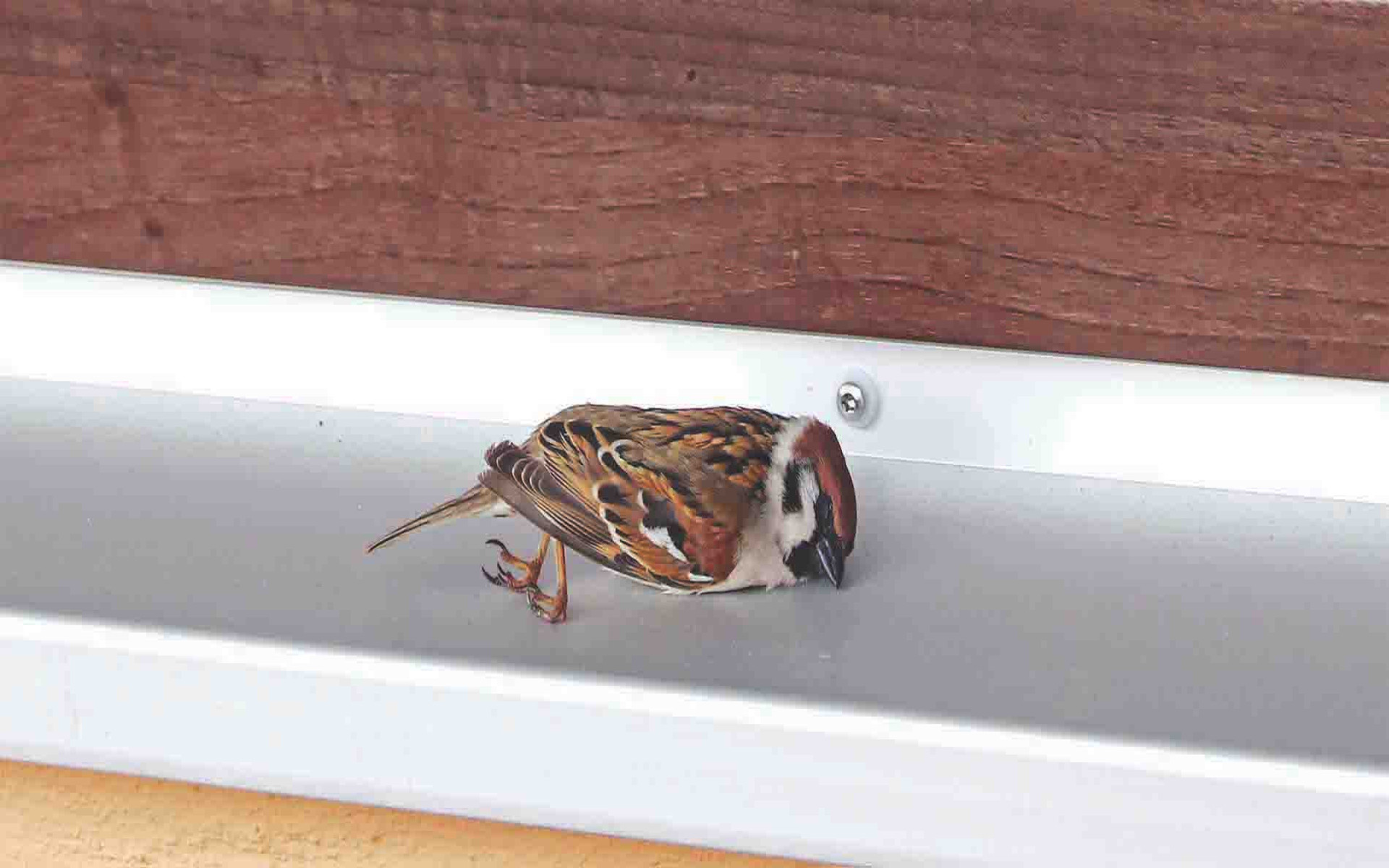 We woke at the thud, panicked.

My wife and I had been dozing in bed, squeezing the last seconds of sleep out of our pillows before the inevitable onslaught of little people. It’s something of a delicious defeat when you hear the door creak open and steps on the carpet. You know you’re trading something so precious to you (sleep) for someone so precious, who you just wish would be precious elsewhere. But then they’re all warm and soft and tousle-headed and snuggly and saying things like “daddy, can we have special cereal?” and poking their knees into your side and sitting on your face with a full diaper and sticking cold toes into your armpits.

This morning they didn’t get to do all those precious, horrible things to us because we woke up to the sound of something thwacking against our window. After shaking off the confusion (no, it’s not a child on the roof; they can’t reach the window), I recalled why I knew the sound. It was a bird. And from the sound, a pretty sizable one.

I said as much to my wife, as I tried to open my eyes but managed only a half-squint. She half-muttered sympathy, as if she cared deeply inside but couldn’t get past the early morning fog. I added that since it was a big bird, it probably got away a little dazed, no harm done. I tried to find her to give her a reassuring pat, but I was too drowsy and missed completely. I also couldn’t pry my eyelids open still; they ached a little, as if I hadn’t used them for a week instead of approximately six hours.

I’ve read that birds, reptiles, and some mammals have something called a nictitating membrane, a third eyelid that acts as a translucent shield when they are diving or flying. They can draw it horizontally across each eye to moisten and protect it. For instance, many birds use it when they are regurgitating food for their kids so they don’t get their eyes poked out by little beaks.

I think of things like this when I’m abruptly disturbed from sleep. Things like this, and demonic children’s songs that will not be exorcised for hours.

We turned over and buried ourselves in the blankets for three more minutes before the precious, horrible people came and got us.

Nadia was playing hopscotch out on the sidewalk later in the morning when she found the bird. Robins are always the first birds my children encounter and remember. It was easy for her to name the body she stumbled upon, one story below our window, and quite dead. We had a little flurry of don’t-touch-that’s and daddy-is-it-going-to-be-okay’s, and I managed to deposit it into a small terrarium for them to look at. Animals can die of diseases communicable to humans, but this one died upon impact, and it was still warm. So the kids and I examined it carefully.

It was larger than any bird I’d seen this close. The wings were tucked in beside its impossibly light body. Many of its bones were hollow, for ease of flight. The neck was at a weird angle, a wrong angle. The death in front of me was at a wrong angle. It always has been, but it just felt much more wrong suddenly, because it was also in front of my children. Blood speckled its beak, a dark decoration above the warm red tinges on its chest.

I realized that it was a young one, probably a teenager in robin years. Its feathers were perfect, straight and sleek, pinions just slightly larger and smaller on each side, forming beautiful strong wings. And the roses on the sides under the wings were just barely forming up into a speckled breast. It was about the size of an adult but without the experience, which is why it probably hit our window.

One eye was slightly open and looking like black jelly, like it would spill out of the socket as liquid if you tipped the bird over slightly. The other eye was closed. This teenage robin had eyelashes on the under-lid. It had whiskers. Its feet were curled and delicate.

Nadia was watching me. She told me she was sorry that it died because she could see the sadness in my eyes; but I wasn’t really mourning after the bird. We touched its wings, feeling its perfect form beneath our fingers: the surreal softness, the preciousness of a young fleeting life snuffed out. Not a sparrow falls but that He sees it. God saw this.

Woodpeckers will close their nictitating membrane, then tighten it a millisecond before they hit the tree so that their eyeballs don’t fall out on impact. Perhaps we need similar shields.

Only a few days earlier we had discovered a young robin hopping around the pine tree down in the yard. We took pictures. The kids enjoyed watching it hop around. There was a hawk above, circling around, and I like to think we saved that little robin’s life. There was a little one then, alive and bouncing, and then a bigger one, dead and stiff.

Sharks close their third eyelid when they attack. This way they can see their victims without getting blood in their eyes.

Kai got out of the house when he was only one year old. We noticed when it was too quiet. He had slipped out the screen door moments after I arrived home from work, and neither Linnea nor I had seen him. I locked the door. It was five minutes before we noticed he was gone, and in those five minutes he was down the outer stairs of the apartment building and toddling along the street.

He liked stairs, so he had kept to the house side of the sidewalk, and a kind and observant couple had pulled over and were with him four houses down when I ran up. The man was on the phone with the police, and I heard him say, “Oh never mind, it’s okay. The father’s here.” I thanked them, breathless, and held my son, and held him walking back, and held him up the stairs, and held him for another hour until he didn’t want to be held anymore, promising him I would see him, always, I would see him.

God saw this. How can I say it differently, to ease the pain? God sees… me?

If we mourn this way, how must God mourn at all He sees, at all the flickering lights snuffed out, the bruised reeds broken, the sheep silent before the shearer? Death is nothing new to Him, and in fact, He knows it as an old friend, an old foe, better than us all.

Today, this day, my children are alive and real, perfect in form and surreally soft. They are the preciousness of young life, fleeting, and my God sees them. Lest you think me morbid, think on why this is precious, why as a parent, as a child, as a human I am determined to cherish this thing we call life, why I must defend it for those I love, why death is such an aberration and a destiny and a defeated foe. The thought of death is morbid, maybe, but so is the thought of life without the thought of death. For now, we need both. And God sees us, in both.

Peregrine falcons see too, because as they dive at over 200 miles per hour, they blink their nictitating membranes repeatedly to clear away the debris and clean each eye.

In the midst of holding onto my family’s break-neck life, I find that I am unable to bring myself to accept such a thing as death, and yet… I know that it’s what I must do, for we will all encounter it, sooner or later. This dark thing I wish to dismiss by forgetting, or fighting, or examining on the operating table of a small terrarium: Death will come for us all.  I know, in my spirit, it is good – a gift given so that our difficult, fallen lives will not last forever, but it will never lose its dread, even when it has lost its sting. And perhaps I will embrace it as a friend when more years have passed beneath my feet, or perhaps I will embrace my Savior, and He will carry me through it into the place where it cannot enter.

And my heart holds its breath for all the times I must try to prepare my children for that moment – the one I feel certain I will never be fully prepared for, the one that God sees. I know I am actually only trying to prepare myself. I know it is not up to me, and I wish I could take more comfort in that. Perhaps someday I will. Every day is another reminder that I am not in control, and death is the great Out-of-My-Control.

But I know this. Each day that I walk in the sight of God, He will train my eyes, and my sight can be strengthened by seeing life and knowing it itself is but a shadow of the life to come.

Nadia, my little avian maven, knows that birds need nests. So she settles herself in a patch of fragrant clover and picks flowers as a pillow for the bird. She is kneeling in her pink flowered dress, a lily ringed with gingham, examining the ground and plucking appropriate stems carefully, precisely, preparing for burial. Perhaps, preparing for flight.

And I blink back a tear.