Grateful for A Soldier’s War 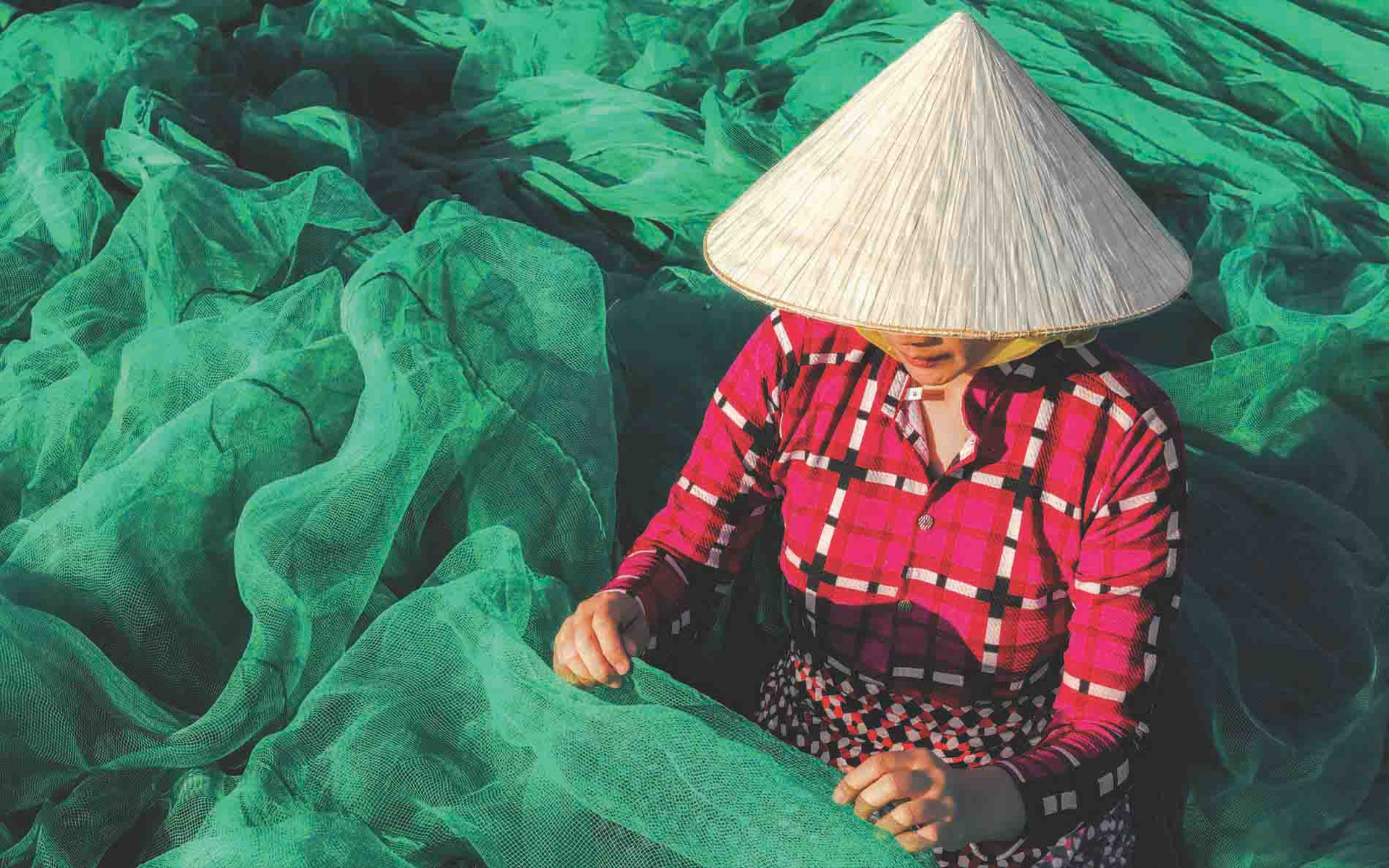 She stood at the edge of the abyss, the blinding darkness engulfing her, enticing her. It would be easy to let go, to wither away and join him. Her arms felt numb, and her powerful legs were weak. Violent tremors traveled up and down her body. A small compelling hand, wet with tears, tugged on her arm. “What will we do now?” a quavering voice whispered. She opened her eyes. The sky was a cerulean blue, and the blazing sun was beating on her torn straw hat, casting a slender shadow on the spring green rice fields. Her rapid heart was calmed by a wind that caressed her cheek. To her dead husband, to her children, to Vietnam, she dropped the condolence letter, and with her feet firmly planted on the ground, said, “We will live.”

To say it was easy is an understatement. Raising five kids as a single mother, in a country where women are expected to be docile, seemed infeasible. “I was taught at a young age that men were the head of the household, they were the heroes of the family,” Diep Ngo, aged 80, recalls sadly, her eyes distant. “I felt helpless. My brothers were charting new paths, while I was still, unable to move.” With a suppressed sob, Ngo recounts that at the twilight hour, she would drown with dark thoughts, but every morning when the sun rose, they would be vanquished. The roosters were the reveille that awakened her slumber, her empty stomach was the battle cry, and the last words of hope from her departed beloved, the mantra that carried her on.

The war took its toll on the civilians of Vietnam; it was a disease that plagued families with deaths and injuries. Young girls were jailbirds, kept busy looking after their younger siblings, torn rags their striped attire and restrictions the bars of their prison. Dreams were locked away, replaced by the basic needs crucial to survival. Even so, when asked if she would take part in the war that claimed her husband, Ngo, her mouth in a straight line and her eyes ablaze, adamantly nodded. Raising both arms until her fists were level with her head, she mustered a grimace. Her nose crinkled and teeth bared, but her eyes sparkled with humor. “Do you think anyone would’ve thought twice about taking me on?”

Scraping bits and pieces of broken memories from her childhood, Ngo recalls that the only freedom she truly had was that from the pressures of education. “I never did well in school. Women were not expected to accomplish anything, so it was highly unusual for a women to achieve higher education.” Now, it seems clear that this supposed freedom transformed itself into another burden upon her shoulders, for she had to take on menial tasks when drafted into the position of “man.” For the first time in her life, she left the cage built by the patriarchal society and refused wealthy suitors. “They were bloated with pride... I would never submit to any man like that.” Ngo was ridiculed by her neighbors as a result, but she felt a strange sensation, absent from her life ever since the fateful, disappointed sigh that accompanied the doctor declaring her gender 80 years ago: the jewel of independence.

“As their father was gone, I had to step into the role of the provider. Oh, what a burden it was, but the power and purpose it gave me fueled the sleepless nights.”

Before the age of 30, her long, black hair turned a platinum gray, and impending wrinkles scarred her face as the war robbed her of youth. A moment to weep or reconcile with memories of loved ones was lost in the present.

“Losing my husband was truly hard, but myself, and other women of Vietnam, had to choke back grief and look to the future,” she remarked. Leaving the house militarily before the sun rose and coming back well after the crescent moon silently loomed in the sky, the only thing Ngo regrets is not spending as much time with her children. But, what she had to do was necessary, as every day was a battle. Even so, how could she explain to them the rough calluses on her hands, which toiled tirelessly, tending the infested wounds left after the hungry bullets pierced the heart of Vietnam? How could she explain yet another outline of a large palm on her red cheek, this time from an angry customer, unsatisfied by the knee-length trousers she had spent all night mending?

Through it all, she remained an eternal warrior, whose struggles rivaled those of men fighting raging wars. Diep Ngo battled gender inequality and injustice, all while leading her family through desperate times. An old poem by Xuân Diệu filled her thoughts as America, the land of rebirth and opportunities, slowly emerged on the horizon: “Your feet have hardly tread round this way... Open your arms to clasp the spring, then from your hand let there be light” (translated by Thomas D. Le). And for the first time since her husband’s death, she welcomed the moist tears, for the valiant soldier’s burden had been lifted. Her dauntless mission was complete.

I’m forever grateful for her valiant decision to bypass social stereotypes and become a sort-of soldier, leading her family to survival, to new opportunities, to an education, to happiness, to America. It's a natural, humane feeling that is respectful of the wisdom, the strength, and the sacrifices of the old. Every evening, after the tiring cycle of school, I retreat back into my place of comfort: my grandmother’s arms, and for the past 17 years, her past life was but a false, beautiful painting, rid of pain and hardships and suffering. That one night, under a blanket of softly twinkling stars, I retraced her hands, touching them, caressing them, tracing her old, calloused, scarred fingers and her bulging veins, to finally realize the truth: that there was so much I didn’t know about my hero.