The Hummingbird: Small in Size, Great in Art

The Hummingbird: Small in Size, Great in Art

Research on hummingbirds (also known as nectar birds or Colibris), the smallest of the 9,800 bird species living today, has revealed remarkable facts. The world’s smallest birds are equipped with mind-blowing structures and functions that push all physiological and anatomical boundaries. The bee hummingbird (Mellisuga helenae), considered to be the smallest bird in the world, is only 1.96-inch-long and weighs 0.06 ounces.

There are around 330-340 species of hummingbird and they live only in North and South America and the nearby oceanic islands. With their colorful feathers, they are some of the most beautiful birds.

How the hummingbird flies

A hummingbird flaps its wings so fast that the motion cannot be seen by the human eye but only detected through special cameras. The wings move at an incredible speed in a seemingly complex pattern, drawing circles back and forth 50 to 80 times per second, depending on the species. Under the genus Colibri, the horned Sungem (Heliactin bilophus) species flaps its wings 90 times per second; the purple amethyst Colibri (Calliphlox amethystina) flaps its 80 times per second. This speed increases up to 200 per second during a short spike while escaping from an enemy. Moving back and forth, the wings oscillate in the form of the figure 8 in the air. While in most other birds the movement of the wings produces the power to lift up and down, Hummingbirds, like helicopters, can perform movements such as hanging in the air or standing steadily as well as flying backward or rising in a vertical direction. 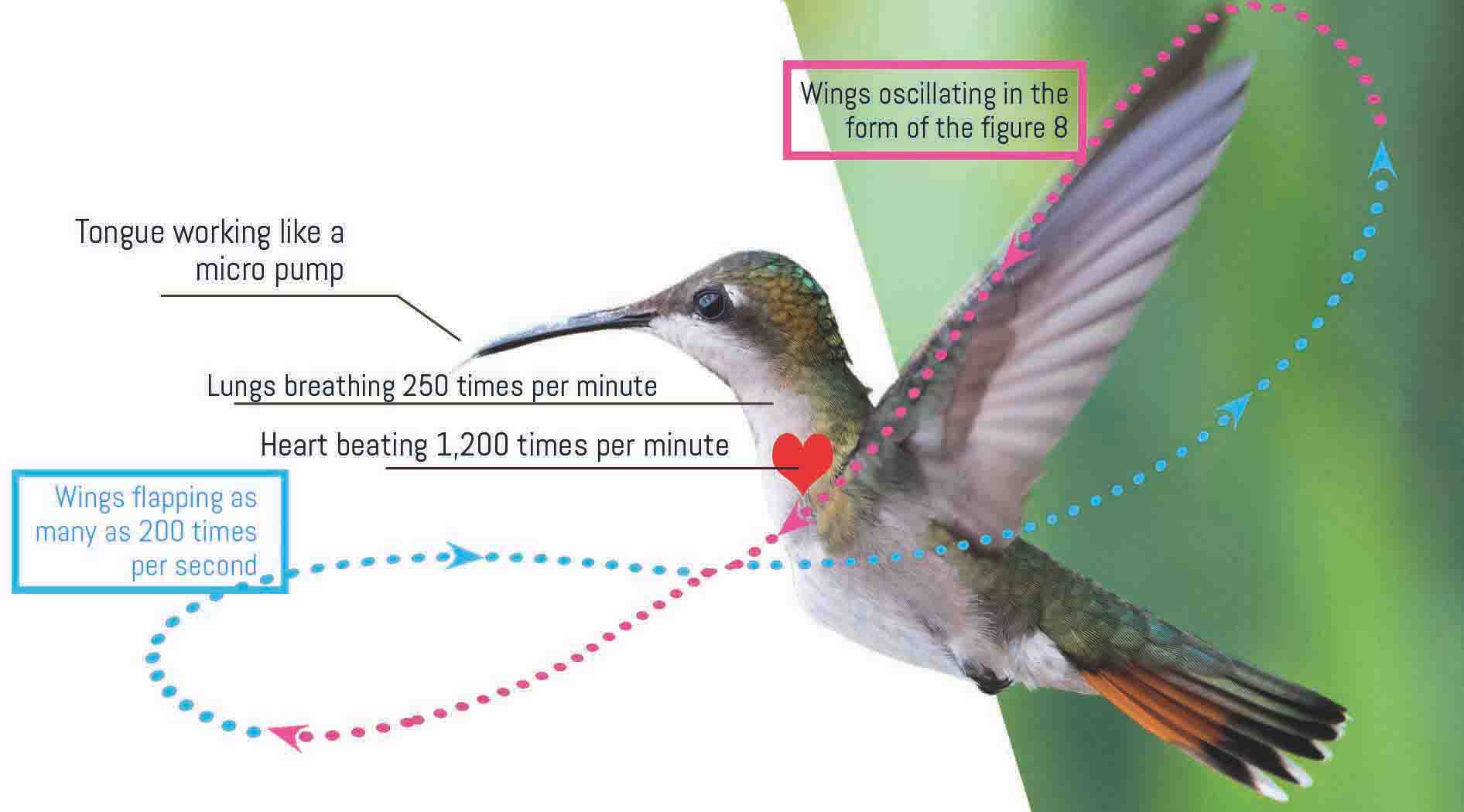 Flying requires a lot of energy. The amount of energy spent is related to the bird’s body size and flapping speed. In this regard, given that a colibri flaps its wings 80 times per second, it takes a great deal of energy to maintain such a rapid movement. The colibri’s chest muscles were perfectly created for flapping quickly and take up 40% of the hummingbird’s total body mass. Therefore, a colibri consumes more energy than other birds; it’s basically a fighter jet.

In order to meet this high energy demand, the amount of nectar a colibri consumes every day has to be equal to their body weight. Living at such a high metabolic rate requires a fine adjustment of food consumptions with precise calculations.

Such a high food intake requires a high metabolism – and thus, the need for oxygen increases dramatically. When the need for oxygen increases, there can be two kinds of conditions. Those animals with very large lungs can intake a lot of air at once. And those with smaller lungs can produce the required oxygen by breathing many times a minute. Colibri or Nectar birds are the ones that can breathe the most in one minute. The lungs of the world’s smallest birds breathe 250 times per minute to transfer oxygen to their hearts weighing a mere 0.003 ounces and beating 1,200 times per minute.

Toronto University’s Kenneth C. Welch Jr. studied the metabolism of hummingbirds for more than 10 years. He discovered that there is a relationship between the size of hummingbirds, energy efficiency, and oxygen consumption, and that larger hummingbirds are more efficient energy users than smaller ones. A hummingbird can take 2.44 cubic inches of oxygen per 0.03 ounces an hour. When a small weight is added to the bird, this amount increases to 3.66 cubic inches, and their tissues use oxygen very efficiently.

A hummingbird’s metabolism is the fastest among all vertebrates. It needs to eat almost constantly to get the energy it needs to produce fuel for its breathtaking metabolism, which functions like a power plant. It receives nectar from 2,000 flowers every day. If we humans could work at this bird’s energy levels, we’d have to eat about 1,300 sandwiches a day to produce energy, and our body temperature would rise to 725 °F! Also, our hearts would have to beat 1,260 times per minute. Although nectar from flowers is the main fuel source driving the bird’s metabolic engines, it also occasionally eats insects, for protein needs.

During any given 30-minute period, hummingbirds burn the sugar they had taken in an hour ago. If we apply this rapid intake of sugar and the metabolic cycle in human beings, we would have to drink a large bottle of soda and burn the sugar in it every minute.

Unlike us, hummingbirds use both glucose and fructose from nectar in their intestines, circulatory systems, and muscle cells. However, we can support our bodies at urgent needs with an intake rate of 30% of glucose. Half of the nectar that hummingbirds take is glucose and half is fructose. In this modern age, high fructose derived from corn in our diets has paved the way for metabolic diseases and obesity – that is, people cannot metabolize high fructose.

Scientists are trying to determine how hummingbirds can process fructose. It is known that there is a carrier molecule different from glucose in fructose. This carrier is very rare in human muscle cells, but it is found in abundance in hummingbird’s muscle fibers; so we believe the mystery of how they utilize fructose so fast is about to be solved.

Hummingbirds have been equipped with mechanisms to increase the rapid introduction of nutrients such as fructose and glucose – which are basically small sugar molecules – or amino acids into their metabolisms. Their hearts and blood vessels work at a high speed to carry the sugar into their tissues as well as to transfer a lot of blood. In addition, a large number of capillaries have been implemented close to the muscle cells so that the blood can reach each and every cell.

While humanity has not yet invented a machine that can move in a figure-8 pattern 80 times per second, including forward and backward, the ultra-flexibility of a hummingbird’s unique wing strokes demonstrates the special creation of its bones, muscles, and joints. The colibri’s brain and nervous system, which control these muscles and joints by transmitting signals, require infinite knowledge and power. The flexibility of the shoulder joint in the movement of the wings, which allows them to bend to extreme positions not found in other birds, gives us an idea of the wing’s unique design and architecture. Although biomimetic engineers have spent millions of dollars applying this complex system to technology, they have so far failed in their attempts to produce a similar machine.

Cooling the feathers due to the friction of the muscles and the tremendous movement of the wings is a problem in itself. While man-made machines need advanced cooling systems, the hummingbird has been created with a such a built-in system.

Biologists from the University of Connecticut have discovered that hummingbirds’ tongues have a very special design and work like micro pumps. Tongues about twice the length of their beaks allow them to reach deep into flowers. The nectar is then pumped into the body in less than 1/20th of a second. This occurs thousands of times each day. Tai-Hsi Fan and Margaret A. Rubega, who for a long time examined how hummingbirds stick their tongues 15 or 20 times a second into the tubular part of a flower, said that they “could not clearly understand how they drink the nectar.” In their latest study, they showed that it was only possible for the birds to hold nectar through two channels in their tongues. It was once thought that the physical rule of the upward movement of liquids in capillary tubes, even without suction, worked in the hummingbird’s nectar intake; but when special video recordings of the movement of their tongues were examined, it became evident that the tongue first compressed the nectar in a series of movements, then sprung up very quickly and the nectar was suddenly sprayed into the channels.

It would seem that both the hummingbirds and the flowers they need for sustenance were created in perfect harmony.

Red hummingbirds migrate from Alaska to Mexico every year. They can fly 56 miles per hour. Prior to this journey, they feed for one or two weeks to fill their fuel tanks, forming a layer of fat equal to half their body weight. Since these activities cause a lot of heat loss on the body surfaces, they cannot provide enough energy to stay active for more than 12 hours at a time. To counter this, they fall into a deep sleep every night for 12 hours. The energy storage, flight endurance, long-distance migration, and returning with the young ones are each complicated factors that their coming together to make this journey possible cannot simply be explained by blind chance.

Of course, the smallest bird in the world would have the smallest egg size: a mere 0.5 x 0.3 inches, for a total weight of 0.007 ounces. Considering that this wonderful bird’s design is embedded into this egg, which is about the size of the nail of our little finger, it can be understood how perfect a creation it is.