Itching: The Way Our Skin “Talks” to Us 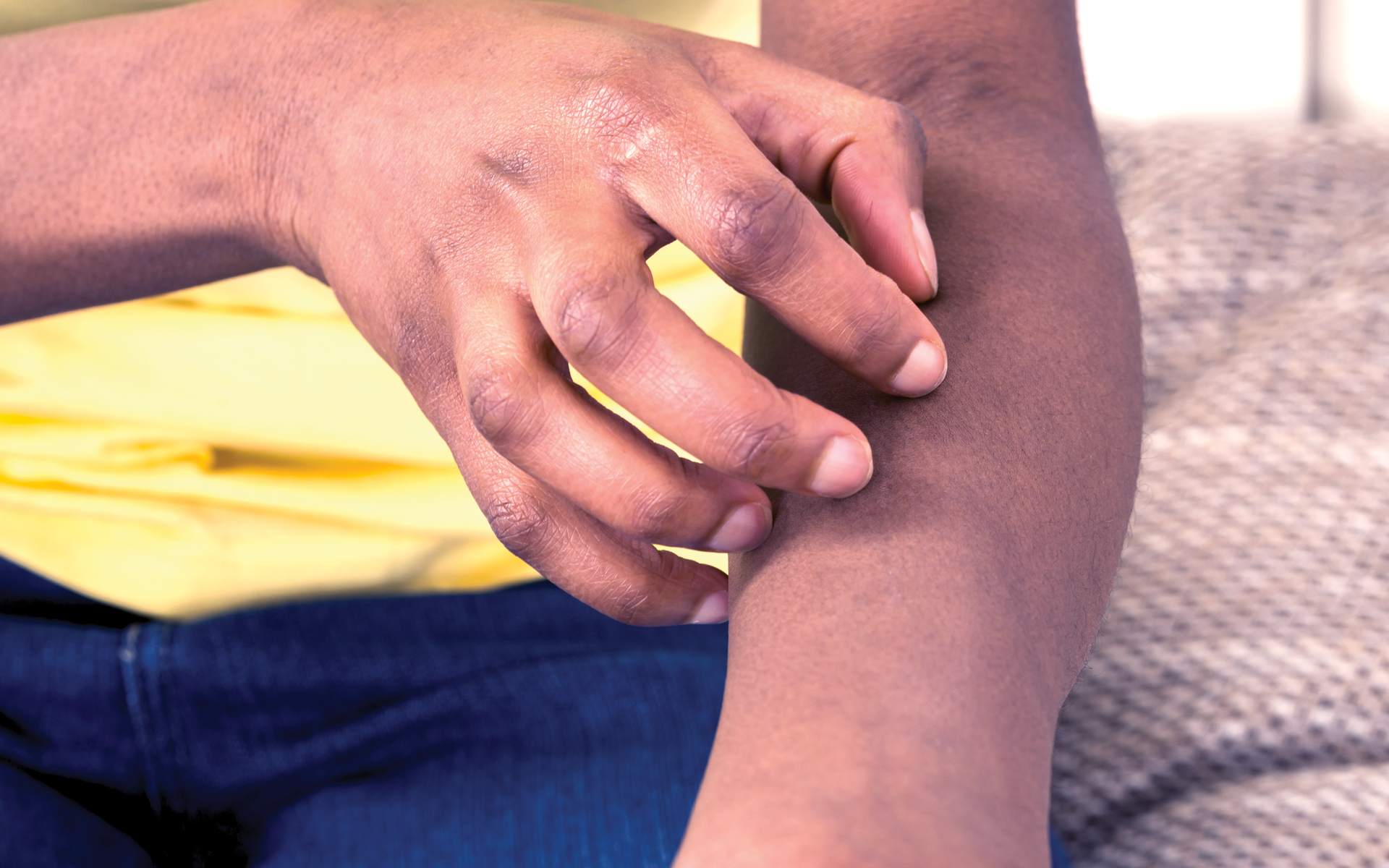 Sometimes, your back itches slightly and scratching it at that perfect spot fills you with an odd sense of happiness. Other times, you notice a biting itch on your arm and a chickpea-like redness shows up there. Oh, those mosquitoes! It is rarely likely to catch a mosquito in the act, and sometimes it even feels as if their bites just appear out of thin air. As you scratch the blister to soothe the itchiness, your eyes scan the room to locate its infamous proboscis. You see it on a wall, plump with the blood it sucked from you. You cannot help thinking: Why do their bites always leave so much itching? Or even, what is the purpose of itching at all?

Itching is an unpleasant feeling we perceive by our skin and mucous membranes, and an occasionally uncomfortable and sometimes very excruciating feeling.

Itching, just like pain, is a sensation intrinsic to our body to protect itself [1].  It is the way our skin “talks” to us. Indeed animals, even fish, itch too. When itched, our skin instinctively and in its own tongue tells us, “There is something that bothers me and I want you to push it away from me immediately!” If it was not for itching, we would not notice a spider walking on our arm. We would not be disturbed by lice and scabies mites or even fungi that settled on our skin, and we would not try to protect ourselves from these pests either.

An ordinary scabies patient has an average number of about 15-20 adult scabies mites on their skin. In the case of Norwegian or crusted scabies, which is most commonly observed among the elderly, the bedridden, people with seriously weakened immune systems, or those who are unable to itch themselves sufficiently, there are thousands of parasites under the thick crusts of the skin [2]. Itching accelerates the blood circulation on the itched parts, and tissues virtually prepare to fight infection by the rushing blood cells and substances [3]. Yet, millions of people also suffer from chronic itching and scratch their itches much more than usual. To understand this, we need to set on a journey from our skin to our brain.

Human skin consists of three layers: epidermis, dermis and subcutis (also known as hypodermis). The dermis layer in the middle makes glove-like protrusions upward into the epidermis. At the top of these protrusions are mechanoreceptors and nerve endings that allow our skin to sense stimulus (such as temperature, sharpness, pressure, vibration, pain, or itching) [3]. With these receptors, our skin functions as one of our five sensory organs and more like an “alarm system” of our body against changing conditions outside. This alarm system has been created so perfectly that each component knows exactly what stimulus to detect. 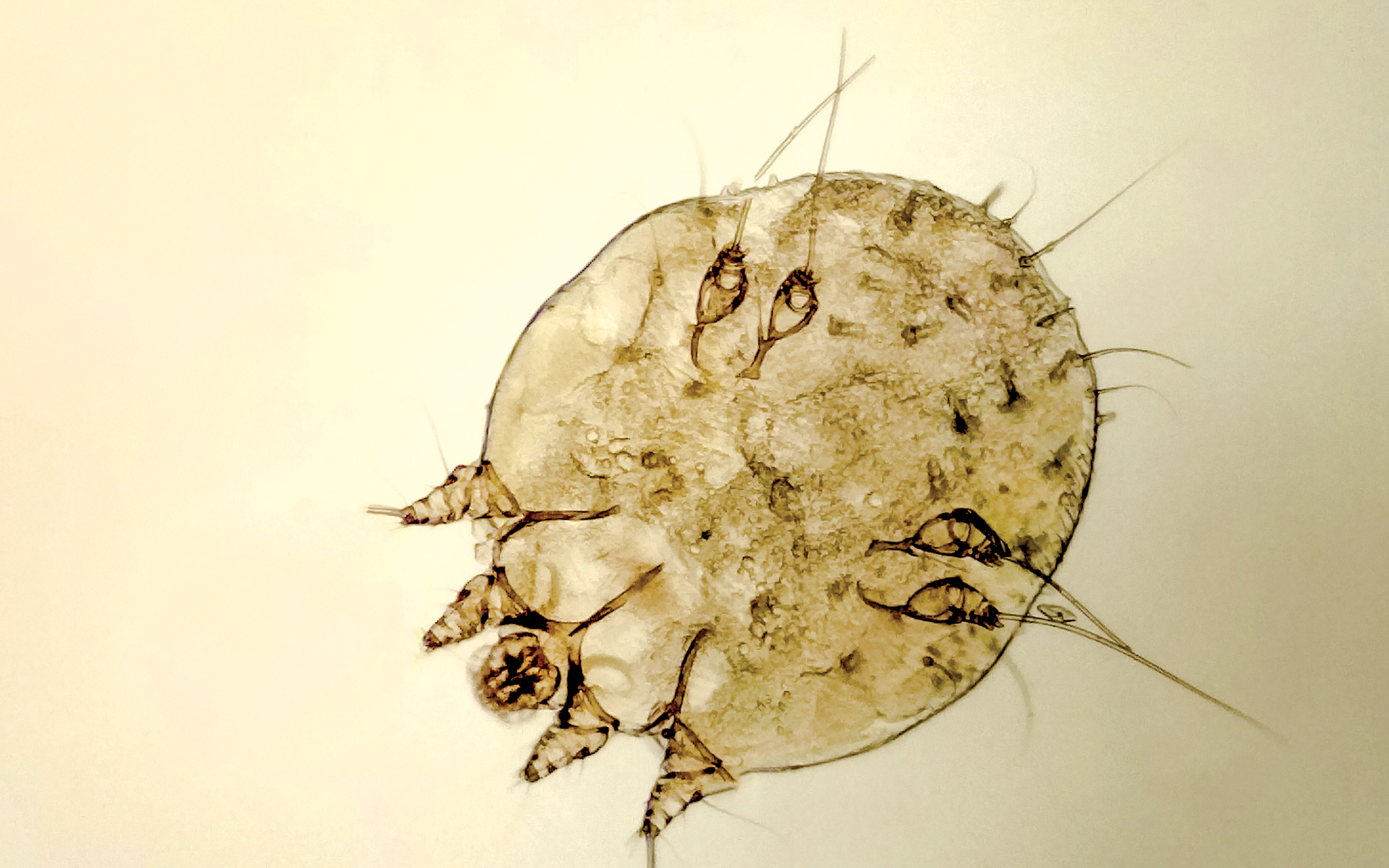 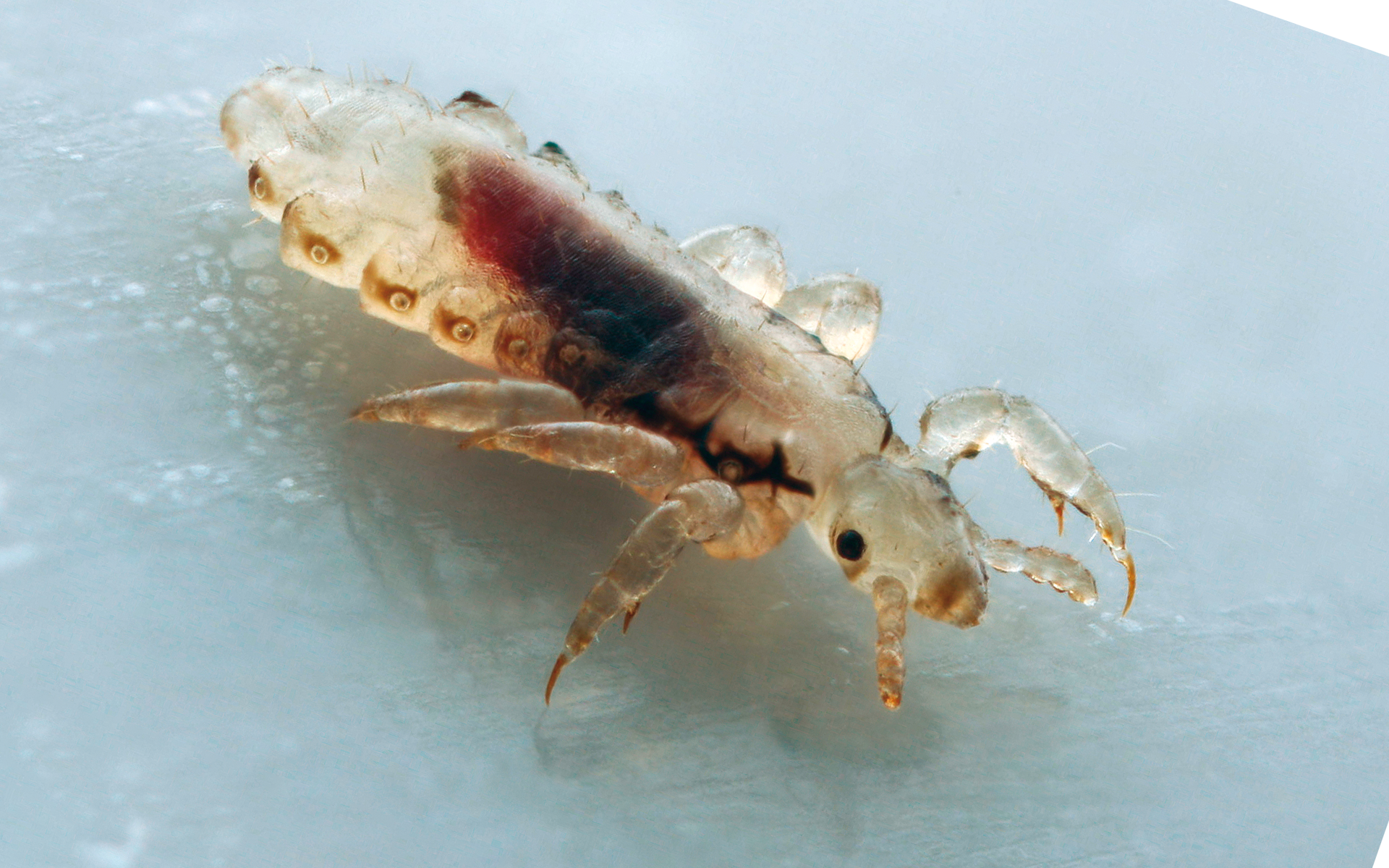 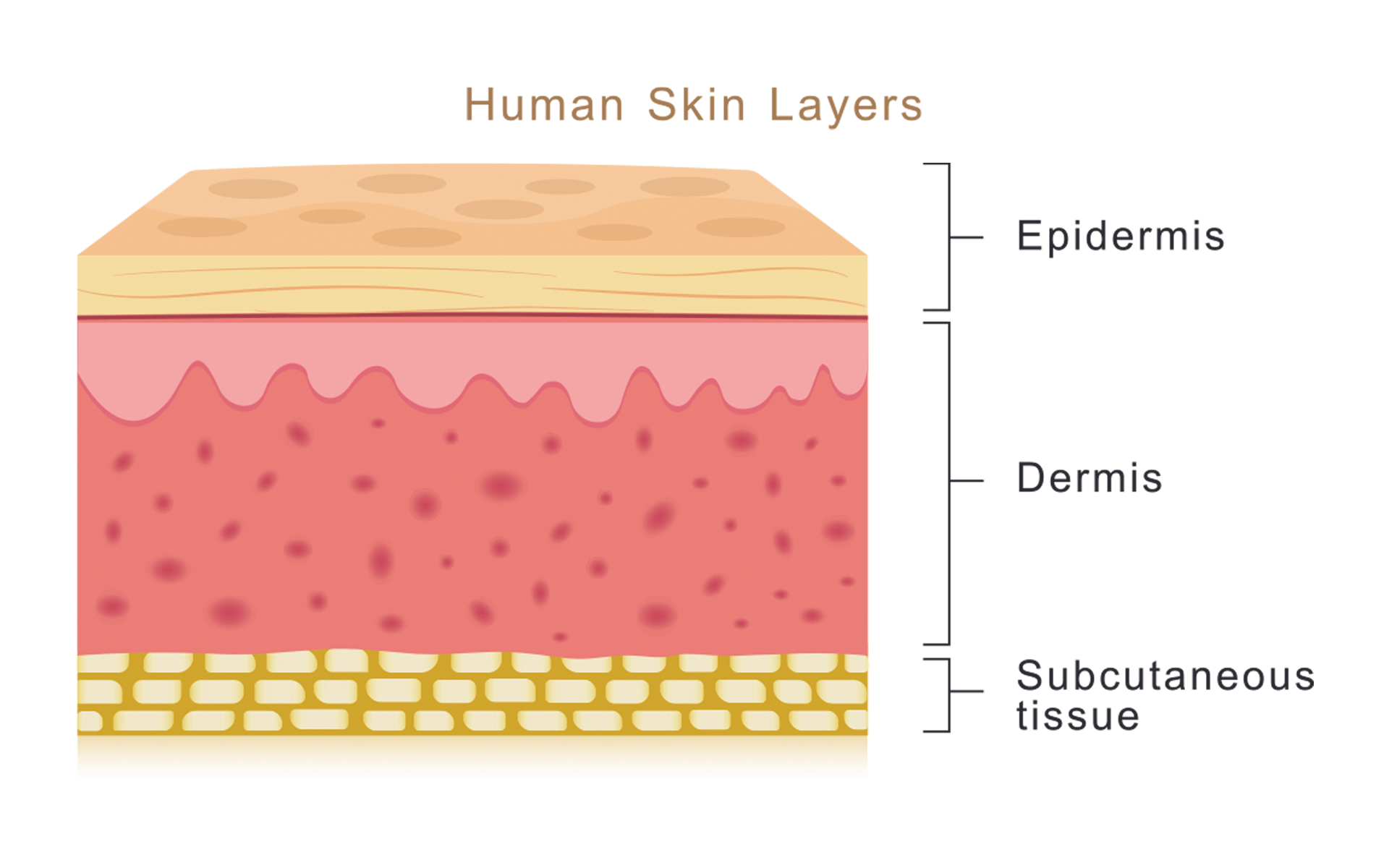 Previously, it was thought that pain and itching were sensed by the same receptors (nociceptors) and that mild stimuli were responsible for itching while strong stimuli were responsible for pain [4]. Yet, a contradiction existed because while pain triggered an avoidance reflex, itching activated the scratching reflex. In recent years, it was discovered that the receptors (pruriceptors) that perceive the itching sensation on the skin are the free boundary terminations of C-fibers with myelin-free, slow conduction velocity extending in the form of tree branches toward the upper layer of the skin. Furthermore, it was found that the skin cells themselves behave like itch receptors [3, 4]. When we receive a stimulus that induces itching, such as a mosquito bite which leaves anticoagulant substances on our skin, the mast cells in the skin tissue spring to defense against those alien substances. This ensues the secretion of the bodily defense system called mediators, substances that are produced and stored by mast cells as precursor for emergency conditions. Histamine is the most known of these substances and is the most important mediator in itching conditions [5]. Histamine binds to receptors found for itself in myelin-free C fibers that are tasked for detecting itching on the skin. If we consider histamine as a key, the lock that it fits into is on the nerve that senses itching. Thus, the itching nerve is stimulated by histamine.

The nerves receiving this stimulus connect to the spinal cord at their respective levels and transfer the message to another nerve. Each of these transfer processes is mediated neurotransmitters. The last message transmitted to the brain through these nerves is assessed by the brain and labeled as “itching” [6]. The brain determines the coordinates of the itching location and orders the scratching action to the related muscle system. A new journey that conveys messages from the brain to the arm muscles ends with scratching. Considering the swift rubbing action when we feel an ant walking on our face and scratch to push it away, we may value how fast and perfect our brain and transmission system work.

It is also rather odd how soothing itching can be despite its initially uncomfortable feeling, almost as if our body is rewarding us for saving it from a threat. There are several reasons for this contradiction. Scratching causes a low-intensity pain on the skin. Pain and itch are positioned on the skin alternately. The transmission of the sensation of pain is prioritized while the transmission of itching is prevented [7]. Consequently, our brain senses the pain and, in response, secretes the hormone called serotonin to soothe the body. Although this makes us feel relaxed for a short time, the brain continues to transmit virtual sense of itching by connecting to the receptors that are located on the spinal cord along the same nerve path with the receptors for serotonin [8]. This condition, which may be termed as a vicious cycle of itching-scratching, unsurprisingly infuriates patients. Scratching the same area on the skin continuously causes the production of new mediators and oversensitivity of itching nerves, which can thus turn itching into a chronic distress. Chronic itching can often result as a complication from skin diseases such as scabies, lice, eczema, fungal diseases, or drug allergies. It can also result from a systemic disease such as chronic renal failure, cholestatic liver diseases, thyroid problems, iron deficiency anemia, blood diseases and, rarely, cancers [7]. Itching in systemic diseases can be triggered by mediators on the skin but also by neurotransmitters in the intermediate pathway. This kind of itching cannot be controlled by drugs called antihistamines which block the histamine pathway. Sometimes the brain will receive false itching alarms due to post-shingles contraindications or nerve damage in the vertebrae. Such episodes of itching need to be addressed to prevent adverse outcomes. At times, the reason an itch can occur can even be psychological when there seems to be no need for an itch. According to research, scratching activates the brain’s reward center which triggers the addiction mechanism. Patients in that case are thrilled as they itch constantly [9].

As doors in this mysterious journey of science are opened one after another, we discover that nothing has been created without a purpose, including apparently discomforting sensations such as itching, which, it turns out, is how our skin communicates with us!