My White Experience in the Black Community 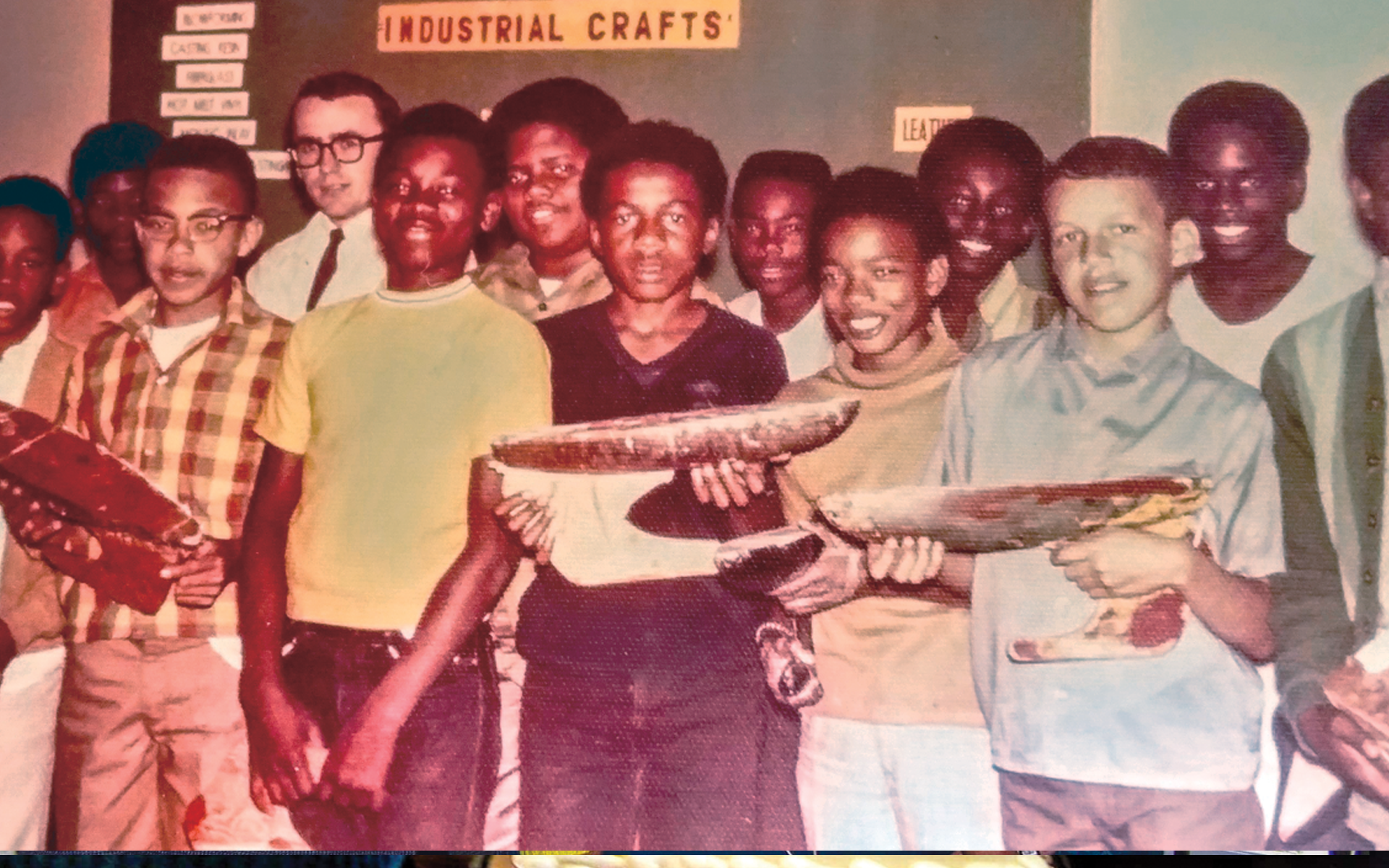 It never occurred to me that I was prejudiced. In fact, I was inspired to leave the life I knew as a young white man to be a Christian missionary in Africa. Yet, until that time at age 22 in my little town in Colorado, I don’t remember ever meeting a black person or knowing anything about black history. I just knew I wanted to know and serve God. As I prepared to depart my country for that foreign land, I felt an inward restraint so strong that I canceled my plans with Africa Inland Mission. In the coming years, several events and relationships impacted my decision and changed my life. My desire had been admirable, but difficult circumstances revealed that I was not like I had hoped that I was. It would take 49 years before I went on my first visit to Kenya.

Amid a complicated set of circumstances, I found myself in Los Angeles—alone, far from home, and having made decisions that canceled everything that I had accomplished in college and learned from my numerous, hopeful mentors. Suddenly I needed a job. Not knowing why, I was impressed to apply for a teaching position in Watts. This was soon after the riots and fires of the mid-sixties.

When I applied to L.A. City Schools, Superintendent Baer said that in all of Los Angeles only one teaching position was open. It was in Watts! I went to Charles Drew Jr. High for an interview with the principal, Mr. Henrikson. He told me I could have the job if I wanted it, but he wanted to assure me I would be a failure. I was white, and I would be a teacher. I would face nothing but rebellion among the 1800 black students and represent authority. Having a strong conviction, I surprised him. I said “Fine, I will take the job.”

Suddenly, I was a white teacher in a black school. I was to teach plastics and other industrial subjects, of which I knew absolutely nothing. I would have as many as 44 students in my shop classes. On my second day, a riot broke out. It was chaos. My students threw my two desks into the walls and tore down some of the plaster. They were all screaming “Get outta here Whitey and don’t ever come back!” I ran out of my shop door, across the teachers’ parking lot and across the campus to hide in the Counselor’s Office under Mr. Kerr’s desk. He was a black man, the former teacher of my shop classes. He knew if I were a failure he would have to return to that impossible job.

I cried on the way to school and quit every day for three months. In the agony of my situation, I learned things about myself. I discovered that my love for God was mostly doctrinal, and my love for people mostly theoretical. In the next four years, 700 students passed through my classes. I had as many as four death threats on my life in a single week. My students sometimes started fights in class, chased others with a hack saw and chisel, threw a hammer at others, threw orange juice at me during recess, and more. In my constant distress, one day I went into my supply room during class, slammed the door and just stood there, cursing them all. I was frustrated and angry that many saw my white skin and cursed me for the same reason. I didn’t see people. I didn’t see faces. I just saw black bodies in motion. And I suddenly saw the prejudice and hatred in my own heart.

Where had that little missionary in me gone? A light dawned inside of me—something was wrong in my own heart. The situation had not made me prejudiced. It only exposed what was deep inside of me already. Perhaps my students had the same problem. I cried out to the living God and realizations began.  My hatred began to turn to a genuine love that I previously only thought I had.

Soon, I was elected Department Chairman, and my students had responded to my changing view and feelings. I brought many of them home with me on weekends. I had no “teacher’s pet.” Rather, it was a rivalry, a great honor to be invited to Mr. and Mrs. Nelson’s apartment for the weekend. In my third year, students prepared a project display for the Los Angeles Industrial Crafts Fair. Of 34 Junior High Schools, my students took First Place, a phenomenal accomplishment.

By that time, I had begun to see them as people, individuals, creations of a loving God whom everyone can relate to. I wasn’t “color blind.” I saw color as a beautiful gift, the more diverse the better. To this day, Ricky, Michael, Louis and the others remain in my heart. If there were ever a need, I knew they and the others would defend me to the death, as I also would have for them. I failed a lot, but a lot was gained—in them and in me. Watts had become my Africa.

Between my entrance into the black community and the present time, I have had countless experiences of peoples with complexions, languages, and cultures different from mine. When I discovered the depths of my own prejudice and depravity while teaching in Watts, I opened my heart deeper than I could have ever known possible. Since that time, I have grown, filled with love of God and love of all people.

Half-way through my doctoral program 42 years after teaching at Watts, I was required to present a Forum Essay to students, faculty, and the public. My essay was on Poetry. The essay’s impact was significant. The critiquing professors were all known to be incredibly sophisticated, daunting, and tough. No critiques being offered, the chairman concluded by saying that during his 14 years at Oxford Graduate School (OGS) there had never been a student’s presentation that was so outstanding that no one thought it could be improved. The discussion was then opened up to the audience for responses. One impactful, positive comment came from a highly esteemed, black professor. Another wonderful comment in the audience came from a successful black woman, my esteemed colleague. The President of OGS later asked if I would extend my Forum Essay to a doctoral dissertation. Eventually, she also arranged for me to meet the esteemed Dr. Maya Angelou.

Through amazing circumstances, among a luncheon of 500 black women and I in Charlotte, NC, I heard Dr. Angelou speak. Weeks later, my wife and other guests were sitting at her lunch table, an exquisite affair! I had read much of her stunning life story but physically being with her vastly enlarged my views of the black community, of their suffering, struggles, and successes. On one occasion in her home, we sat with Dr. Angelou and Oprah Winfrey for a casual discussion of more than one hour. The night she invited us to stay overnight in her home, she asked me to autograph one of my books for her and then ordered eight more copies for her friends. She included us in her Annual Five-Day-Celebration of Thanksgiving in Winston-Salem among her closest biological and social friends.

From my friend Dr. Maya Angelou, I learned of her great involvement with Martin Luther King and Malcolm X. Because of her, I became acquainted with the daughter of Malcolm X as we were seated in the VIP section at the U.S. Post Office inauguration of the “Maya Angelou Stamp.” Because of her, I have great friends among the black community in America and with Africans of many countries. I even got to go on a fantastic visit to see Mama Sarah, President Obama’s grandmother in Kenya. Five weeks before she passed away in 2014, Dr. Angelou designated me to help design, build, and launch a traveling, educational museum of her life and work. Her personal assistant of more than 15 years continues to call me and stay overnight with us in Nashville occasionally as he is crisscrossing our great nation. And so much more...

The experiences and perspectives that I have shared in this discussion were pivotal adventures of my life, but there are countless other stories of impact to my own life—of concept, of sub-culture, and appreciation of the black community. The relevant enlightenment and spiritual renewal of my heart has included people of every culture, religion, and complexion whom I know from all around the world. It is through experiencing persons in their context with mine, serving and participating in mutual events in my home and theirs, that my appreciation has grown, expanded, and been shared. It may be that others have found the need to discover their own inward condition and realize a journey such as mine. The joyful overflow of my life’s adventure thus far has led me to publish more than 25 books on family, spiritual guidance, and work, relevant to all. My contribution to celebrating Black History Month here may be small, but it is personal, it is real, and it is mine.