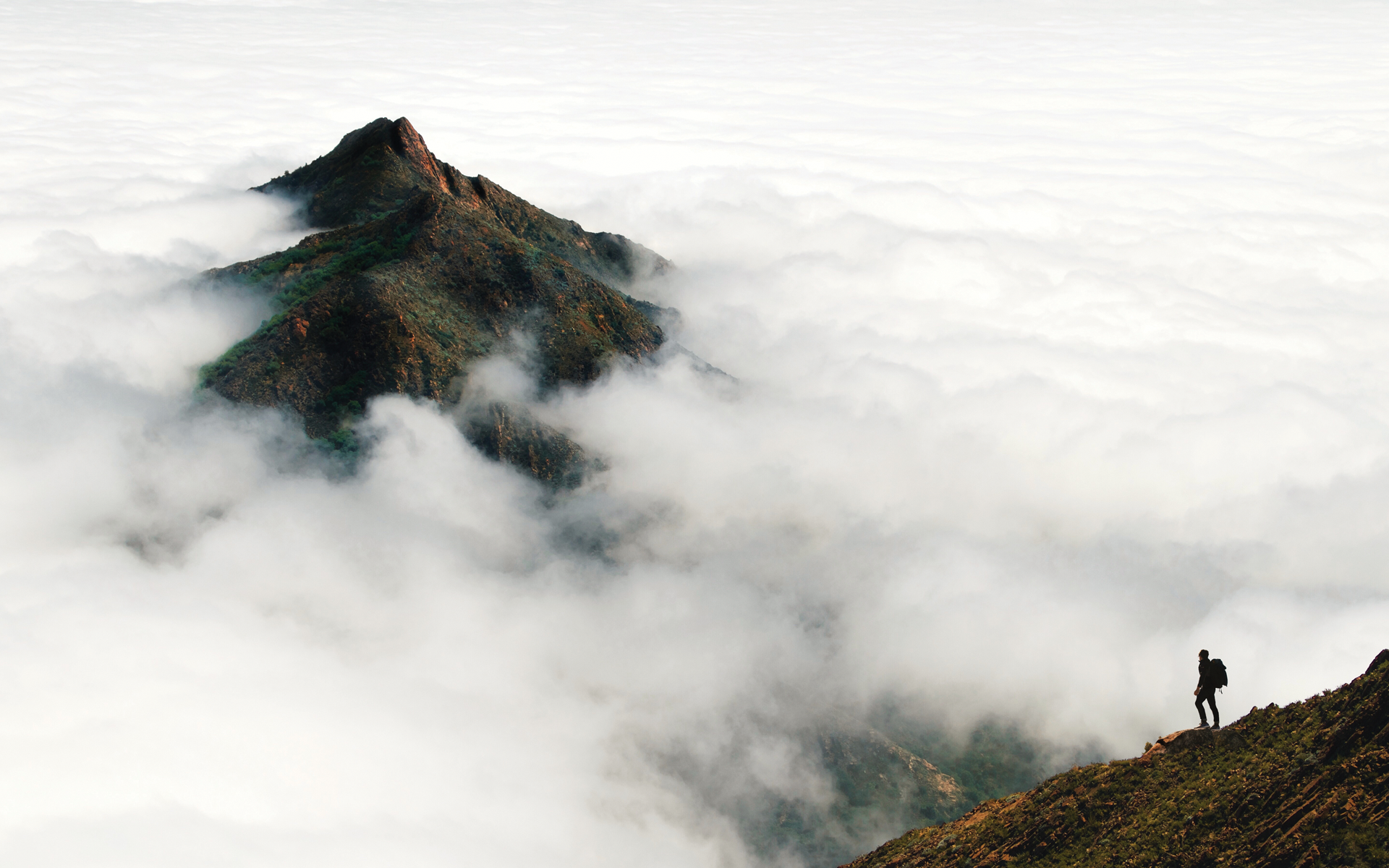 Subsistence by God denotes that the servant of God regards all existence, including him or herself, as being non-existent in and of itself, and discovers in his or her consciousness that every being, living and non-living, is a manifestation or shadow of the light of the Divine Knowledge and Existence. Initiates who experience destruction and effacement with respect to their corporeal self and gain a new existence by God’s permanence or subsistence exist by His Existence, subsist by His Subsistence, live by His Life, know by His Knowledge, will by His Will, and hear and see by His Hearing and Seeing. They see and hear what other (normal) people cannot see or hear, and receive favors that come as a result of such hearing and seeing. Initiates who have reached this rank, which marks the near completion of the journey, and where they feel themselves to be in the most pleasurable state of being freed of their name and existence, are in relative terms qualified and mentioned with any of God’s Attributes in the heavens and earth. Those who have contact with the spiritual realms can feel in their consciousness a reflection of this favor. This state is also regarded as persons of heart being called according to their own perception of themselves. Only those with purified souls who see and think of nothing but the Truly Beloved One, and whose hearts always beat by His Existence and Subsistence, and whose spirits are continuously reanimated with a new flash of His manifestation, can experience this state. So long as they can keep their relation with the Ultimate Truth at the level which has carried them to this summit, and the Ultimate Truth continues to treat them in this way, do they perceive even the slightest falling under the influence of others in knowledge, perception, feelings, and consciousness as a spiritual eclipse, which may end in their spiritual spark being extinguished. If they feel they have suffered such a falling-off, they will, in order to save themselves from it, be on the lookout for the All-Beloved’s opening a window in their spirits from His special consideration.

From another perspective, subsistence is, after the total disappearance of things that are transient and visible in the sight of an initiate, either a temporary permanence dependent on its own conditions, or an uninterrupted continuity due to the extraordinary confirmation of Divine grace. That is, while a traveler continues his or her journey in the light of the signposts or traffic lights along the way, after a certain point, which is determined by the impressions and discernment of the traveler, the signposts will no longer be needed and are no longer visible. This stage, where the One Who is indicated by the signs and proofs shows Himself with the lights of His Existence, making signs and proofs no longer visible, and where His witnesses are the only instruments for His praise and exaltation, is a different point of breathing and turning to a different angle. If the initiate has the ability and resolution to continue journeying toward further goals, the breezes of annihilation will begin to blow in both the person’s inner and outer world. When the journey is almost exceeding time and space, the initiate feels in the consciousness complete annihilation ready to turn into subsistence. One cannot say anything, nor think of anything, nor attempt to perceive anything. Despite the brilliance of the witnesses that point to Him throughout the universe, they disappear when faced by the lights of His Existence, like stars sinking when the sun rises. As stated in (55:27), There remains forever the “Face” of your Lord, the One of Majesty and Munificence, only the Divine Being continues to exist beyond the scope of human perception, understanding and feeling.

Initiates can view His subsistence or permanence in three stages: the first is based on knowledge, the second on vision, and the third on the pleasure of experiencing His Existence. While traveling through these stages, any information that has been acquired by the known means of acquiring knowledge loses its significance and utterly disappears into what is known. All instances of seeing and feeling vanish while the meaning and content based on or reached through seeing, feeling and knowing remain intact. While all relative truths no longer exist, the absolute truth prevails and the natures of existents, each differ­ent from the other, are surrounded by the lights that emanate from their annihilation in the True Existence. In all of these stag­es, annihilation provides a way to subsistence and wherever an initiate attains subsistence, it can address itself to different levels of feeling and perception, producing relative effects of its own on things. For this reason, this rank has usually been called “subsistence by God with or in the company of God,” and not only “subsistence by God.”

We can view this stage from two angles:

If we deal with the matter from the approach of the Com­panions, nothing exists by itself nor does it have any essential existence. Everything has relative, insubstantial and accidental existence as a manifestation of the Existence of the Eternal Truth, according to its receptivity. Things, as dependent on the Absolute Truth, have a constant but relative truth. In the begin­ning, this consideration is doctrinal belief based on acceptance, and in the end it is based on the certainty that comes from knowledge and vision.

In the spiritual journey, the whole of existence no longer has any value or significance in the heart of an initiate and vanishes in the infinite light of the True Existence in the same way that the light of a firefly fades when the sun rises. The initiate gives no place to anything else but God in his or her heart, and leaves him or herself in the cataracts of his or her spiritual pleasures immersed in the ownership and guidance of His Will and the lights of His Existence. The utterance always on the initiate’s lips is “He.”

Travelers who feel themselves in a state of pleasure when they find themselves annihilated with respect to their own acts, advance toward the attainment of a new existence and perma­nence in the Acts of the Ultimate Truth. By feeling transience in their own attributes, they taste the pleasure of permanence in the Attributes of God. By forgetting their own selves—though for­getting has been interpreted in different ways—they attain a new existence by the lights of the Ultimate Truth’s Existence. While they sometimes refer to the relative, existential truth of things and emphasize its difference from the absolute, True Existence, they sometimes can find everything annihilated in the absolute, True Existence. There is left only one rank to be reached by the travelers who have arrived at this point, namely God’s company. Every initiate who has attained subsistence by God can attain this rank according to the individual’s capacity. Attainment of this rank sometimes brings with it a feeling of wonder and sometimes an intoxication and sometimes astonishment. Mawla­na Jami expresses this feeling of wonder beautifully as follows:

Love is not without the flute-player, and we are not without Him.
He without us and we without Him, this cannot be.
The flute always beautifies its tunes, but in fact
the beauty of the tune comes from the breathing of the flute-player.
The following verses, belonging to another hero of subsistence by and with God, are concerned with a feeling of wonder and astonishment:
The lights of my eyes are He, and the direction for my reason is He;
my tongue always utters He, and I sigh and groan with He.
My heart goes on an excursion in He; the love of my soul is He.
My greatest secret is He, and my brightest sun is He.
Those who are lovers and intoxicated are always with He.
Their fasting is He, their festive day is He, and their rituals are He.
My soul has sacrificed itself in the way of its Beloved;
its union is with He, its parting is with He,
and its cure, as well as its afflictions, is He.

Those who have attained subsistence by and with God always feel and think of Him alone, they are always with Him alone, and they begin with Him alone. Attracted by Him, they leave themselves in the overflowing pleasures that come from experiencing Him throughout the universe, and always act according to His good pleasure and approval. In the face of the rays of His Knowledge and Existence, which totally eliminate all others save Him and His friends from their hearts and sight, they cannot help but utter “O the All-Living!” and feel as if they are talking about themselves. They utter “O the Ultimate Truth!” and melt away in the light of His Existence.

O God, O the All-Living and the Self-Subsisting! O the One with Majesty and Munificence! Pour unto us knowledge of You and give us from the drink of Paradise, and enable us to be steadfast on the Prophet’s way and true guidance. And bestow blessings and peace on our master Muhammad, who teaches the true way, and on his Companions, the noble, hon­orable and godly ones.