The Macro and the Micro: Introducing Two New Organs You Never Knew You Had in Your Body 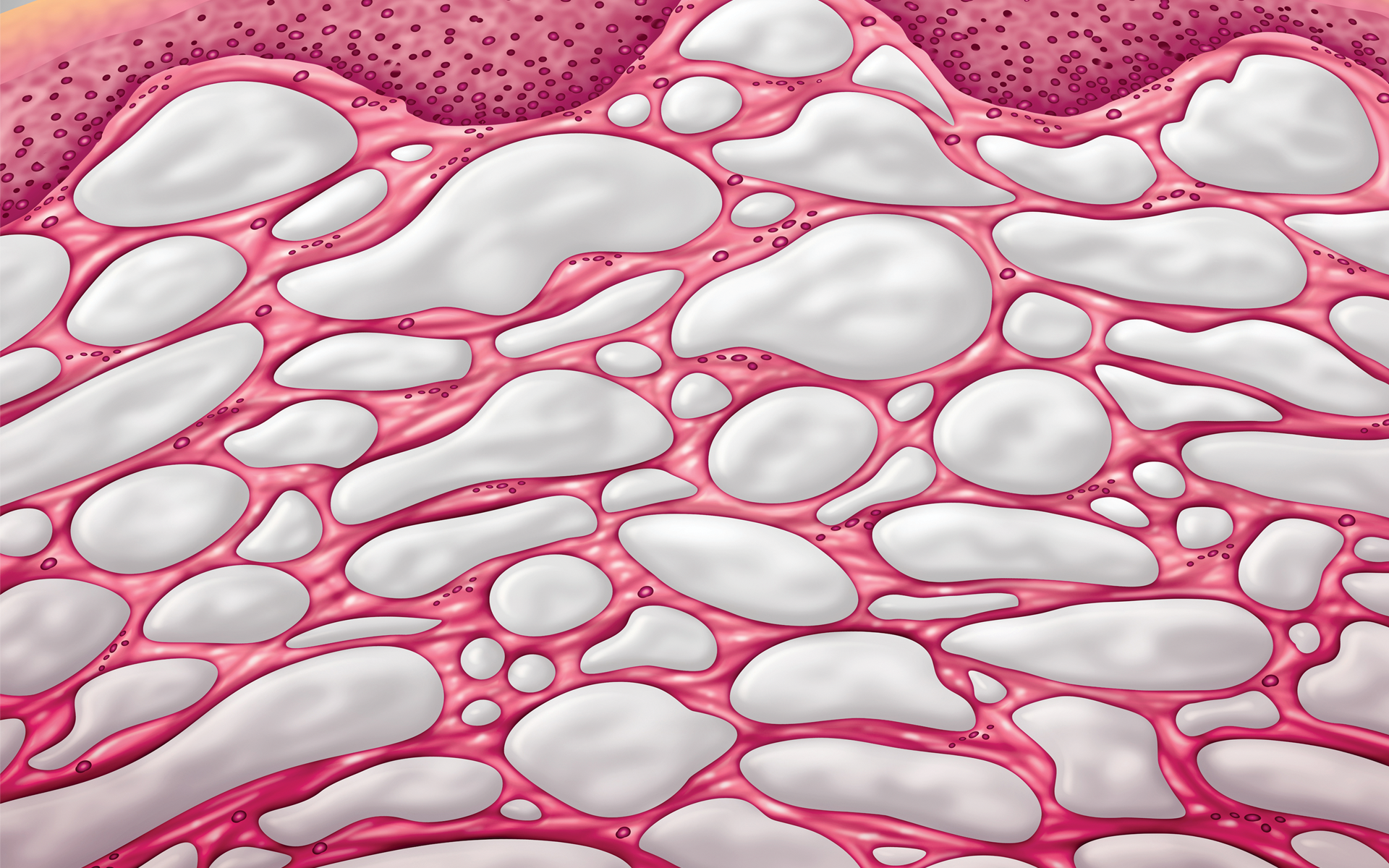 Robots continue to advance and develop every year, and these consistent improvements continue to amaze us with how much they physically resemble humans. Even though these robots lack spiritual qualities and function way below the human brain, we still admire these developments, for they lead to even more discoveries and help us understand the miraculous human body even more.

Notwithstanding our medical knowledge that continues to build upon nearly 3,000 years of shared human experience and research, new discoveries about the human body, the magnificent work of God Almighty, continue to increase our admiration.

The discovery of the “Interstitium” and the “Subcapsular Proliferative Foci” in 2018 allow us to develop an even greater appreciation for the complexity of our bodies. They are called the “macro organ” and “micro organ” according to the amount of space that they occupy in our bodies, along with the nicknames “buffer organ” and “control center organ” according to their function. These newly discovered biological structures did not attract much attention earlier because, in accordance with our current understanding, organs are more easily visible structures such as the hands, arms, eyes, nose, kidneys, and lungs that have a certain shape and a set of clearly-defined functions. It is interesting that although these complex structures are so widespread in our bodies, they were not known until recently; they are now considered as organs [1].

According to an article published in Scientific Reports on March 27, 2018, the “interstitium” was discovered rather serendipitously by David Corr-Loce and Petros Benias of Mount Sinai Beth Medical Center along with Neil Theise, a pathologist from New York University. The discovery came when these physicians were analyzing a cancer patient's bile duct. Although they had been conducting the same routine over the years, it was the first time they had the sight of slots between examined tissues. They realized that the interstitium was unnoticed earlier due to the disappearance of interstitial fluid after they had examined the tissue with their usual histological methods. Subsequently, the researchers found that this structure was found not only in the bile duct but also in many other organs.

Specifically located under our skin, these micro-compartments were also found in almost all organ membranes except the intestines, lungs, veins, and muscles in order to form a network around the organs with malleable but sturdy proteins. The interstitium, the entirety of the intercellular spaces filled with liquid, has been defined as the largest organ in the body. Actually, examining cells and tissues has been the subject of histology and cytology science for the last 150 years, and the fluid that fills the tissues and forms a basis for supporting these cells was not new to the medical world. However, its definition as a new organ was a first.

The researchers froze the biopsy tissues obtained from the bile ducts of 12 patients in order to preserve and examine the anatomy of the discovered structure. One of the reasons that this organ exists is because it protects the surrounding organs by acting as a shock-absorber and has an effect similar to that of a car's bumper. Damage to tissues and internal organs remains minimal when one falls, hits something or is impacted Using a micro-endoscopic camera, the volume of this whole organ was revealed to be about ten liters in an adult human [2].

It was later discovered that the interstitium is also present in the structure of lymph nodes, the most important part of the body's immune system, and that cancer cells enter the lymphatic system through the interstitium. In this case, the interstitium play a significant role as a passageway, or conduction interface, for spreading cancer cells across the body. In an analogy, this organ is akin to the water in which fish swim, the air that surrounds us, and the soil that borders the roots of trees. In this liquid that rotates the cells and spans on the base where they are positioned, any exchange of substances of body biochemistry is regulated within the required amount and size to provide a good setting to the cells, and the hard mechanical effects that may impact the cells are alleviated and absorbed by this liquid pad.

Each discovery of the interstitium’s features, including its significant contributions in the fight against cancer, reveals more and more about how this great organ aids in intercellular communication.

One of the most important features of the immune system is that it has its own “memory.” The cells of the immune system can remember the infections a person has contracted before, and can fight infections before they spread. How quickly the immune system reacts based on memory may vary, for instance depending on the type of infection, but is usually quite rapid. Considering how many bacteria multiply in a matter of seconds, a quick response must be launched to prevent infections from spreading across the body.

Professor Tri Phan of the Garvan Medical Research Institute led the team of researchers that discovered the subcapsular proliferative foci (SPF), a “micro-organ” that appeared in the lymph nodes during an infection. Lymph nodes and lymphoid organs such as tonsils, thymus, and spleen are surrounded by a protective capsule made of connective tissue. This capsule was considered to serve the purpose of a mechanical support only to enclose and protect the lymph nodes. However, recent research has shown that in some areas under this capsule, cells that had been alerted to previous encounters with harmful invasive organisms are gathered. These main subcapsular cells are memory B cells that carry information on how to counter the invasive organisms. Memory B cells also proliferate into plasma cells, which are highly important for producing antibodies. Therefore, when an infection reoccurs in our body the subcapsular proliferative foci act quickly to form the first defensive front to prevent the possible spread of infection.

The purpose of vaccines is to activate the attenuated form of a harmful organism to be stored in the body’s memory as an immune response. If the body comes back into contact with similar bacteria in the future, the immune system will remember how to fight it. The discovery of the sub-capsule foci also revealed that these centers are the home for the memory B cells. If they can unveil the development and training processes of the memory B cells in these slots, scientists can produce vaccines that enhance the memory of the immune system even more quickly and efficiently.

The reason why these structures have not been noticed earlier is due to their emaciation, brief emergence, and disappearance. The sub-capsule proliferation centers presented in the article “Memory B Cells Are Reactivated in Subcapsular Proliferative Foci of Lymph Nodes” published in Nature Communications on August 22, 2018 are defined by some authoritative scientists as the “micro-organ.” According to the findings about this new organ, if our infection-fighting immune system would have activated longer than it currently does, we would easily die. Every minute is very crucial in this struggle. These excellent centers that produce memory cells under the lymph node [3] capsules fight bacteria which can replicate in multitudes every 20–30 minutes during an infection.

Although the world of science has been working with the microscope for about 400 years, these centers that have been embedded in our body since its creation could only be noticed today when the microscope design has reached its technological peak.

There are trillions of bacteria living in the intestinal cavity, skin, and orifices of our body. Some of these are already protective and beneficial, yet others are pathogenic. But they do not make us sick because of B cell production centers. When our immune system is weakened for any reason (such as stress, insomnia, or malnutrition) these bacteria can cause illnesses and meet little resistance. These sub-capsular micro-organisms surrounding the lymph nodes were placed in the most strategic places across the human body to fight infections in the fastest way, while the lymph nodes were placed at locations that are most vulnerable to microbial attack.

Consequently, these discoveries increase our admiration for the palace and magnificent realm called our body. It is likely in the light of this information that the anatomy and histology books may be rewritten and the definitions of organs and tissues may be redefined.