Trypanosomes: Creatures with One Thousand and One Sheaths

Trypanosomes: Creatures with One Thousand and One Sheaths

If you heard that a very destructive creature was in your village, what would you expect this creature to look like? Perhaps a ferocious cat, or a colossal beast that was capable of leveling whole buildings? Such a creature does exist in Africa, except it is a single celled bacterium by the genus Trypanosome, a microscopic creature with the capacity to strike fear into the heart of virtually an entire continent. Living a segment of its life as a parasite in the bloodstream of humans and other mammals, Trypanosome can trigger a lethal neurological disorder in the circulatory system. It has also been found that it is the cause of a serious sleep disorder in humans. The disease can ruin a person’s circadian cycle, cause fevers, and changes in personality. Unfortunately, about 60 million people in 36 of the 52 countries in Africa are at constant risk.

Another significant role in the lifecycle of trypanosomiasis is the tsetse fly, the bacteria’s most common intermediate host, which transports the Trypanosome from one mammalian host to another. Trypanosomiasis is endemic in a large area of approximately 3.8 million sq. mi. in Africa, where both the parasitic disease and the tsetse fly coexist. Moreover, the danger is not limited to humans because it also affects many other mammal species, most notably livestock and horses. Malnutrition often follows as a direct consequence when large swaths of animals are killed by trypanosomiasis, as there will be less meat and dairy to consume.

The trypanosome parasite invites disease for the host mammal by collapsing or neutralizing its immune system. Let us first remember how the immune system works:

Every living thing is provided with two things: food and protective systems. Immune system is one of these vital systems. Most immune systems across mammals function in similar ways; Antibodies are produced to destroy toxic substances and antigens on foreign bacteria, fungal cells, or the virus sheath invading the body. These antigens can be found on the infected foreign cells and have a unique shape and structure according to the organism that causes each disease. The immune system binds to the antigens of the foreign organism in the same manner as a key-lock system with its antibodies produced while fighting against the disease, thus neutralizes the invading organism.

Most of the antigens, which reveal the identity of a foreign being, are structures created of proteins, polysaccharides, or protein-based fats. Our immune system has the sensitivity and the capacity to produce an infinitely diverse variety that can discern even quite identical but foreign substances bearing antigenic properties for our body. To draw an analogy, a specific antibody can be produced for each speck of dust on Jupiter. Our immune system is blessed with the ability to synthesize appropriate antibodies by selecting proteins that differ in type or location of one amino acid.

The mechanism of binding of the antibody to the antigen is carried out with effective economy, because each type of antibody is produced specifically against a particular antigen. This mechanism works like a key-lock system, so the body recognizes its own cells and does not attack them. Each antibody produced in the immune system is created in a three-dimensional, one-to-one compatible structure with the antigen that causes it to be produced, and easily recognizes and locates it, binds as the key fits into the lock, and thus renders it harmless by disrupting the chemical structure of the antigen.

Trypanosome and the immune system

The case of trypanosome vs. the immune system is somewhat exceptional. The abovementioned almost universal immunity principle does not work against trypanosome. Even though parasites are constantly exposed to the mammalian immune system in the blood, they constantly change the antigen that forms the surface sheath. They thwart the host's defense, as if rapidly changing their password so that it can never be guessed. Until the immune system produces new antibodies to bind to new antigens, some of the trypanosomes discard their sheaths and drape themselves in another one. If this condition persists, the immune system of the host cannot cope with the infection and may succumb to it.

This extraordinary phenomenon astonishes the scientific community and many scientists are investigating the molecular structure of antigen diversity extensively in African, European, and US laboratories. These parasites are only 0.015–0.030 mm in size, and its two most notorious species are Trypanosoma rhodesiense and Trypanosoma gambiense, which inflict serious damage on the human body.

Like many other parasitic species, the life cycle of trypanosomes is very complex. In each phase of this life journey, the parasite takes different forms and exhibits different characteristics in such an unusual way that generates curiosity. The life cycle can be summarized as follows: when the tsetse fly bites a disease-bearing mammal, the trypanosomes in the mammal’s blood are sucked up and settle in the middle intestine of the fly. They undergo a series of complex processes including several structural and biochemical changes. After about three weeks, the trypanosomes appear in the fly's salivary glands in a disease-bearing form. Meanwhile, they are also draped in new surface sheaths.

When the secondary host fly bites a healthy person, the disease-causing trypanosomes enter the blood of the new host. In this new stopover, parasites are transformed into a form in which they can rapidly multiply. First, they wreak havoc in blood vessels and on lymph nodes, causing fever, marks and swelling in the body. At this stage, a constant struggle with the host's immune system ensues. A likely invasion the patient's central nervous system by the trypanosomes can cause intense drowsiness, coma, and eventually death.

In years of research on the trypanosomes, the thick surface sheath covering the cell membrane of the parasite was first described in 1965 by Keith Vickerman of the University of Glasgow. Shortly thereafter, different surface sheaths were discovered in different trypanosome clones. In 1968, Richard W. F. Page from the Molteno Parasitic Research Institute in Cambridge analyzed and decoded the isolated antigenic surface proteins from several clones, revealing that each clone had a biochemically different protein. The clarity of these differences suggests that each antigen is expressed by a different gene. In the 1970s, George Cross and his colleagues found evidence supporting Le Page's proposal. These antigens are now called Variable Surface Glycoproteins (VSG). As a result of subsequent research, the picture became even more clear.

Once the infection has begun, antibodies are formed in the host's immune system that bind to the variable surface glycoproteins that appear on the surface sheath of the invading parasites. These antibodies kill most of the initial trypanosomes. Yet interestingly, on a few remaining trypanosomes a new sheath to which antibodies cannot bind is built, and the trypanosomes evade the immune system’s grasp. The survivors induce a new population producing new variable surface glycoproteins. This time, the immune system produces new antibodies against these freshly constructed antigens. Meanwhile, the parasitic population grows. Newly produced antibodies are able to kill 99% of new parasites again. However, until that time, the parasitic group constituted by about 1% of the survivors has already changed its sheath. Hence, another population begins to multiply. This process of life being a struggle unfortunately continues until the host mammal dies. 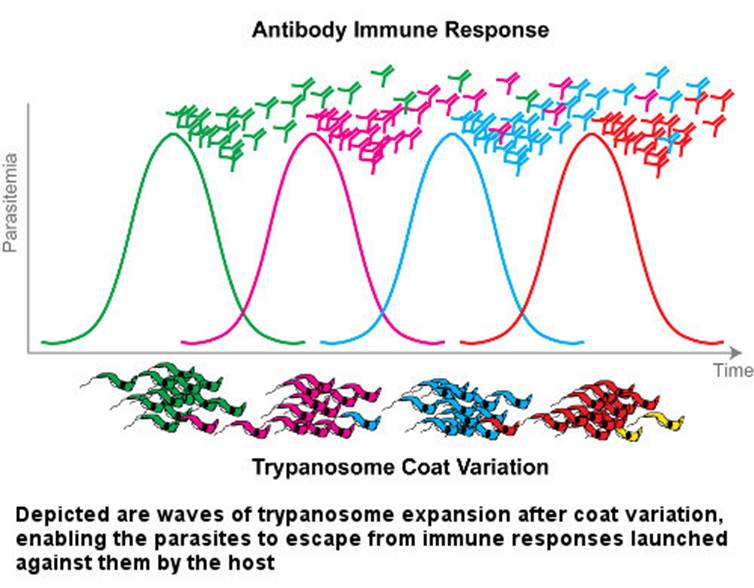 The mechanisms of antigen diversity in trypanosomes are very complex and variable, and the total capacity to produce varieties is not clearly known. Recombinant DNA technology is used to investigate the structure of the genes for producing variable surface glycoproteins, the mechanism of cell membrane binding, and the selection and expression of one of the codes. In addition to the four licensed medicines produced for the treatment of parasitic diseases, new drugs are being developed.

It is astonishing that this tiny window of invisible dimensions has such a huge potential opening to different branches of science. Many such exceptional and precise situations exist in the universe that may showcase contradicting mechanisms with general principles and procedures. Sometimes we may wonder why God creates such harmful parasites. Since we do not know the performance at every point of an entire ecosystem with our insufficient scientific knowledge, limited sensory organs and temporary observation, we tend to see any seemingly harmful being as futile and devoid of wisdom and immediately raise our voices in protest. However, with new discoveries in science, thousands of wise meanings may be extracted from a creature we generally take for granted.