Find a Teacher for Yourself

Find a Teacher for Yourself

As a rabbi and professor of rabbinic literature, I am naturally drawn to interpreting texts. The best moments are when these texts come alive and inform my life (inshallah). I have long been intrigued by an ancient text attributed to a pre-rabbinic figure from the first century BCE (Before the Common Era – rabbis did not emerge until after the destruction of the Jerusalem Temple in 70 CE). The text reads:

Joshua ben Perahia said, “Find a teacher for yourself, and acquire a colleague, judge every person favorably” (Mishnah Pirke Avot 1:6).

This triplet of good advice requires some explanation. Find (or “make,” which is closer to the Hebrew original) a teacher for yourself might also be translated that you should make someone your “master.” In the Hebrew text the word for teacher is Rav which can mean master, as well as being the root of the word rabbi. In other words, choose a rabbi to study with and to follow.

Next, we are taught to acquire a colleague. Most likely this means someone to study with, but it also can mean someone who you can share a meal with (that is to say, you trust that his food is kosher or halal). In general, it is a blessing to have good colleagues.

The final piece of advice, while commendable, seems on the surface to be disconnected: Judge everyone favorably. Might it refer to choosing a teacher or your study-buddy?

I will come back to what I think this text means, but first, I want to consider a text from the Torah, which commands: Love your neighbor as yourself (Lev 19:18). This text, too, seems straightforward, until we wonder how do we “love” on command? Some commentators assume this means that you would care about your neighbor’s finances as you would your own. A small minority of others, I am embarrassed to say, have construed this to mean that you need only love your neighbor who is like yourself. This implies that the commandment is limited to only loving other Jews!

Indeed, there is a rabbinic text from the second century that might be construed precisely this way – it is alarming:

The text is clear that to save a Jewish life, one may violate Shabbat, as saving a life takes precedence over all other commandments. But we must ask: whose life? Does this only apply, God forbid, to saving a Jew? This one of those famous “difficult texts” that we stumble over in interfaith dialogue. When we compare “our best” to “their worst” during dialogues, such difficult texts are stumbling blocks. We all have such texts. And until we learn to dialogue by proudly sharing our best with their best, we will stumble.

My teacher 45 years ago was a man in his eighties, Rabbi Saul Lieberman. He was widely regarded as the foremost authority on the Talmud in his generation. He once told me the story about taking a Shabbat stroll with a colleague from Columbia University, Prof. Morton Smith. Now it happens that Morton, although many years my elder, was my teacher but also my colleague and my friend. He had been ordained an Episcopal priest early in his career, and he loved to tweak the supercilious pieties of religion. Morton was also an expert in rabbinic literature. As the story goes, Morton Smith and Rabbi Lieberman walked past a building site on Broadway when Morton asked my rabbi, “Prof. Lieberman, if that wall fell on me now during the Sabbath, would you save me?”

On the face of it, this was a serious challenge to what might have been understood as the law of the Mishnah. A strict reading might have required Prof. Smith’s body to remain under the rubble until Shabbat ended. But Prof. Lieberman replied in an instant, “Why Morton, of course I would save you! And then, I would go home, consult my tomes of Jewish law, and find the correct reason for having done so.”

Indeed, the Mishnah and other rabbinic literature bend over backward to assure that Jews have good relations with their non-Jewish neighbors (the word used is Shalom) and require that Jews greet non-Jews, care for their poor, mourn and bury their dead, offer condolences, care for their animals, midwife their births, heal their sick, much as would be done for other Jews.

What I learn from the story of my teacher Rabbi Lieberman and my colleague and teacher Prof. Smith is that teachers and colleagues who are NOT Jewish require us to confront, and solve, our tradition’s difficult texts. Interaction with the other, collegiality, even friendship, to say the least of discipleship, require us to love one another as we would ourselves.

My teacher of New Testament, Father Raymond Brown, offered an example from the Catholic tradition. Prof. Brown took scrupulous care in carefully teaching Gospel texts, lest other priests or their parishioners might learn anti-Semitism from those ancient texts. Christianity had a long and sorry history of enmity towards the Jews. Anti-Semitism had been the norm for almost 2,000 years. But in the aftermath of the Holocaust, Christian teaching radically changed. As Pope Francis said in March, 2019, “I stress that for a Christian any form of anti-Semitism is a rejection of one’s own origins, a complete contradiction.”

We take care to find the right teachers. I am blessed to have such teachers and to have made good colleagues in the Muslim world, as well. This is not surprising as the Holy Qur’an teaches,

O mankind! We created you from a single (pair) of a male and a female, and made you into nations and tribes, that ye may know each other. Verily the most honored of you in the sight of Allah is the most righteous of you (Qur’an 49:13, after Yusuf Ali).

In other words, this Hadith seems to teach a tradition similar to that of the Torah and the rabbis. Further, al Nawawi teaches (ibid. no. 13): on the authority of Abi Hamza Anas bin Malik, the servant of the messenger of Allah (peace and blessings of Allah be upon him) from the prophet (peace and blessings of Allah be upon him) who said: “None of you [truly] believes until he loves for his brother what he loves for himself. ” This is also reported in Bukhari and Muslim.

These Hadith traditions emphasize that what is true for Jews is true for Muslims. We must learn to love one another and want what is best for our brothers and sisters of the other religion, much as we would want for ourselves.

Now we know that despite these teachings, there are Jews who hate Muslims and Muslims who revile Jews. Thank God / Al hamdulillah, that we have teachers who clearly teach against this tendency. Our master, Hocaefendi Fethullah Gülen stated:

“A crucial step in healing the sick mindset that leads individuals to kill people out of hatred or other reasons is for every individual to acknowledge the dignity of every human being, to respect them as a work of art that was created by God and to inculcate this perspective in the minds of our youth.”

If we all come from our common ancestors Adam and Eve, Hocaefendi Gülen seems to say to us, then every person shares the same human dignity. No one can say, “My ancestry is better than yours.”

A couple of months ago, I had the wonderful privilege of meeting with Hocaefendi Gülen at his home in rural Pennsylvania. We drove there from New York City, but were warned that Hocaefendi was tired and might not spend more than a few minutes greeting us. As it turned out, we were honored to share an hour of discussion with our teacher. By the end of the meeting, I had found for myself another “rabbi.” I was thrilled to meet this revered leader, a man near in age to my rabbis of old. But I was utterly astounded by the act of humility with which he welcomed me. Hocaefendi Gülen rose from his chair and said, “Rabbi, please sit here in my place.” Had I traveled hours only to experience his hospitality and humility, it would have been a lesson well learned.

But I was privileged to engage further in a wide-ranging conversation on how we might confront anti-Semitism and Islamophobia. As with all good teachers, the conversation and Hocaefendi’s questions have continued to turn over in my mind since that extraordinary meeting.

What can we do to better relations between Muslims and Jews? Here are some suggestions I have learned in my nearly three decades of Jewish-Muslim dialogue.

First, as the Holy Qur’an teaches, we should meet and “know one another.” A good example of how this is accomplished is through the organization the Sisterhood of Salaam / Shalom (https://sosspeace.org/ ). Or we can arrange visits between Mosque and Synagogue. (see http://mideastweb.org/muslim-sermon_cg.htm ). We can celebrate our festivals together (see http://nyc.muslimjewishsolidarity.org/). Here, the Hizmet movement has excelled in arranging interfaith Iftar dinners during the Holy month of Ramadan (e.g https://hizmetnews.com/24889/interfaith-ramadan-iftar-dinner-held-in-montville/#.Xg9tJLpOmEc ).

We can also study to learn about one another. I recommend a book jointly published by the Jewish Theological Seminary and the Islamic Society of North America: Sharing the Well: A Resource Guide to Jewish-Muslim Relations (www.jtsa.edu/sharingthewell ). And, of course, we must protect one another and fight Islamophobia and anti-Semitism by standing together SHOULDER TO SHOULDER (https://www.shouldertoshouldercampaign.org/ ).  Both the Jewish and Muslim traditions demand that we work for social justice and righteousness (e.g. feeding the hungry: https://www.denverpost.com/2012/11/18/muslims-jews-gather-at-denver-mosque-to-help-feed-the-hungry/ ).

Now that I have shared what I learned from loving my neighbor, the non-Jewish other, the Christian or the Muslim, I have a new understanding of the text I quoted at the outset of this article.

Joshua ben Perahia said, “Find a teacher for yourself, and acquire a colleague, so that you will learn from them to judge every person favorably” (Pirke Avot 1:6). 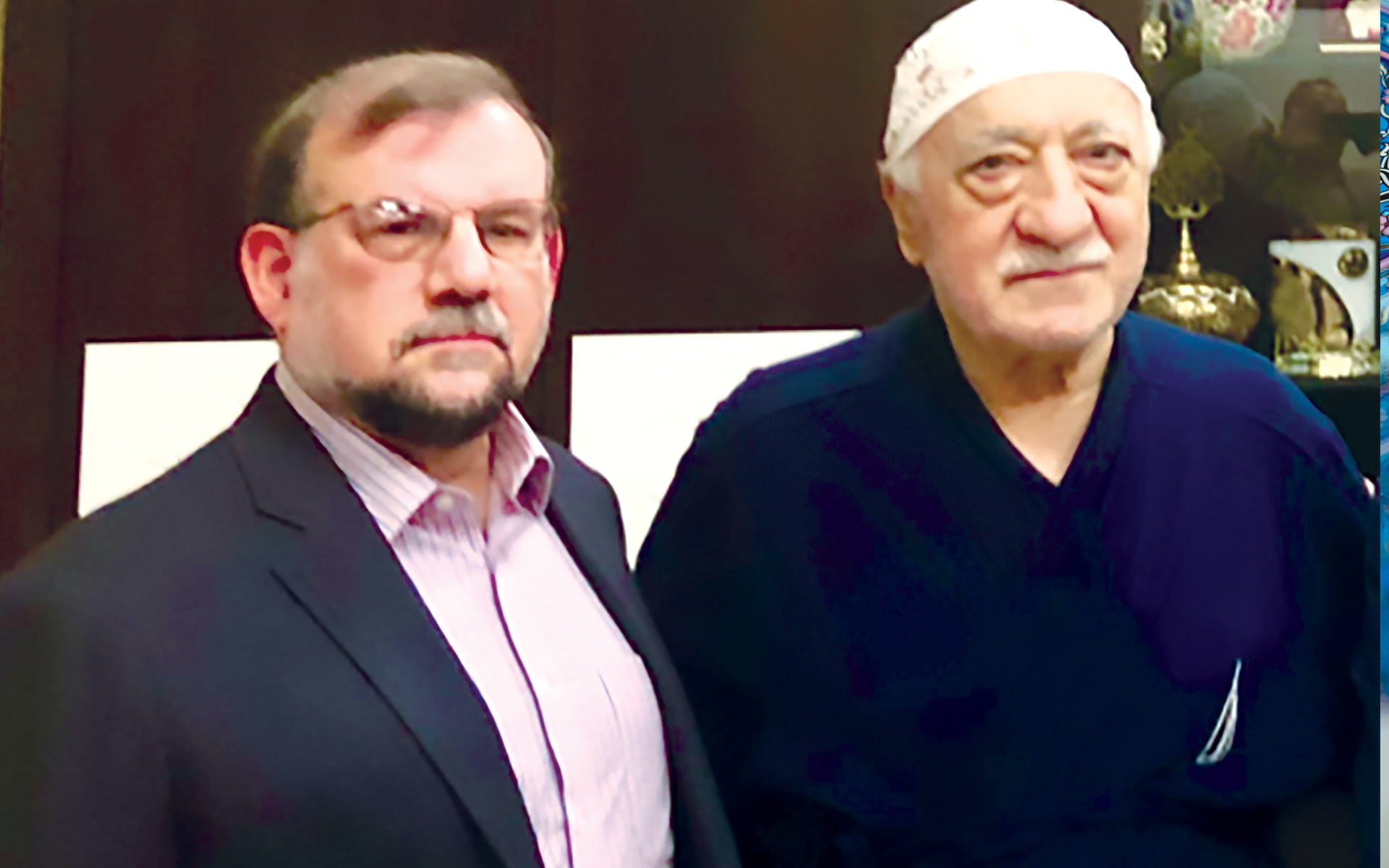