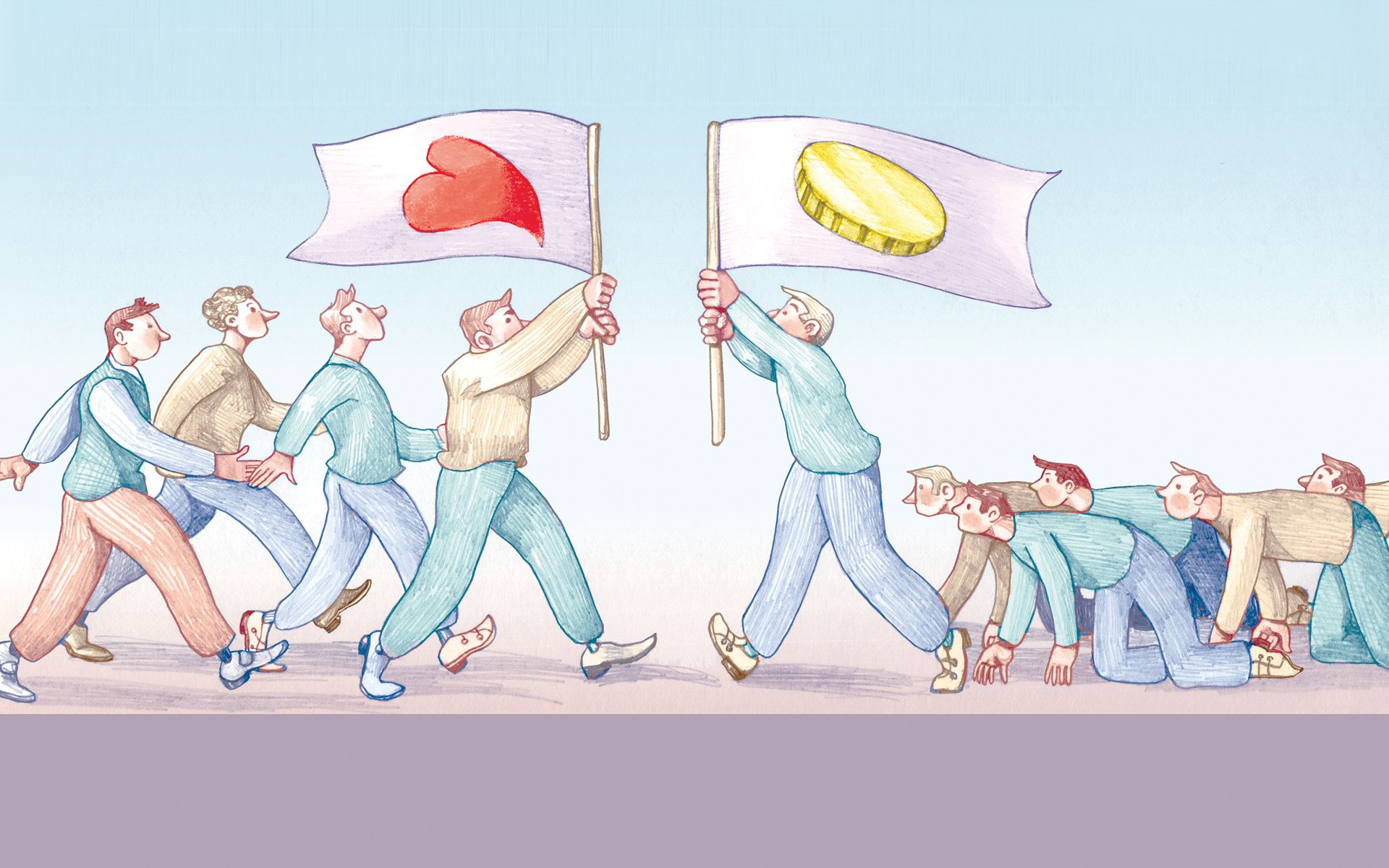 To attain happiness and to avoid mood disorders, which should we pursue

The messages of modern society are all too familiar to us: buy more, eat more, sleep more, take more pictures, and care less about the effects of our actions. We are encouraged to maximize pleasure while avoiding anything that inconveniences us. We cloister ourselves with our material goods and social media habits, promoting self-centeredness. This induces a fluctuating happiness in which phases of pleasure and displeasure repeatedly alternate, which can result in various mood disorders and has been linked to decreases in well-being. In this article, we are going to analyze self-centeredness and its consequences and also interpret its role in a variety of mood disorders and various areas of life.

The Self-centeredness / Selflessness Happiness Model (SSHM) is a theoretical model proposed by Dambrun et al. in 2011 [1]. This model represents different sorts of happiness that are dependent upon the self, particularly the structure of the self. They claim that self-centered psychological functioning derives from how someone perceives themselves and the belief that they are powerful, permanent, and independent. This functioning causes fluctuating happiness and afflictive affects which are also the roots of many mood disturbances. This is heavily contrasted by the perception of the self as flexible which leads to selfless psychological functioning and is a crucial factor at attaining more authentic/durable happiness [1].

After proposing this model, Michael Dambrun conducted a study in 2017 that built upon this model. According to this research, self-centered psychological functioning allows individuals to fluctuate between joy and sorrow, a vacillation that results in afflictive affects. Conversely, selfless psychological functioning gives the individual more emotional stability and feeling of harmony with the environment. They tested these hypotheses in two studies consisting of a heterogeneous sample of citizens (n=547). Analyses of these two studies indicate that self-centeredness (measured by egocentrism and materialism) and selflessness (measured by transcendence and connectedness to others) were two different psychological constructs rather than strict oppositional ideas.

In addition to showing the distinct functioning, these analyses also revealed that self-centered functioning is significantly associated with fluctuating happiness that is the root of afflictive affects. However, selflessness is linked to authentic/durable happiness, which is the result of perceiving the self as flexible and harmonious with the environment and universe. These associations are mediated by distinct psychological processes. For self-centeredness, afflictive affects play a crucial role in the correlation with fluctuating happiness in self-centered individuals.

In contrast, selfless individuals attain authentic-durable happiness that is partially mediated by emotional stability and perceiving themselves as harmonious with others and the universe (2).  In our view, individuals who are more concerned about their happiness are more susceptible to mood fluctuations and disorders, while individuals who have more significant interest for the happiness of others attain more robust and durable emotions.

These studies also suggest that self-centeredness causes problems in society; as such, we will to analyze the results later.

Fluctuating happiness in the self-centered individual

The idea of the self as a real, permanent entity with its distinct boundaries results in self-centered psychological functioning. Laborit's [3] study suggests that each organized structure in the form of an entity seeks gratifications that positively reinforce it and avoids things that risk its homeostasis. The hedonic principal is a major ruler in self-centered functioning and is deeply associated with egoism, egocentrism, an exaggerated importance given to the self, and ego inflation (through material possessions, for example) (e.g. Higgins,1997) [4].

The hedonic principle and its associations are also correlated with some personality disorders, particularly narcissistic personality disorder [5]. This principle induces the individual to focus on attaining pleasure and avoiding displeasure. Feelings of temporary happiness, joy, and gratification are the result of impulsive actions for attaining pleasure and avoiding displeasure. However, only the presence or absence of certain stimuli reinforce the individual and only give temporary pleasure and happiness (Wallace & Shapiro, 2006 [6]). The experience of pleasure depends on circumstances, is an unstable condition that may soon become neutral or may be displaced with displeasure. (i.e., hedonic adaptation, e.g., Brickman, Coates & Janoff-Bulman, 1978; Lyubomirsky, 2011 [7]). Focusing on attaining more pleasure and avoiding displeasure lead an individual to recognize and realize the impossibility of attaining valued objects, durable pleasure, and cause them to repeatedly vacillate between pleasure and displeasure and the arising affects such as frustration, nervousness, anger, hostility, or jealousy, all of which damage their well-being and health (e.g., Miller) [8]. Contrarily, altruism, also called selflessness or focusing on others' happiness, is significantly associated with a higher quality of well-being, health, and longevity [9].

A self-centered lifestyle may cause not only mood disorders but also social problems that also increase the prevalence of different mood disorders. Loneliness is a big problem in contemporary society, though we mostly live in crowded cities adorned with skyscrapers. As the title describes, a study conducted in 2017 shows loneliness and self-centeredness have a reciprocal effect that cause depression and various mood disorders, as well as health and social problems [10].

Generation Me and its consequences on human mood

An increase in narcissism with some indicators of increased self-focus in Americans born after 1970 leads authors to describe that generation as “Generation Me” [5, 12]. This narcissism and self-focus are also intimately related to self-centered psychological functioning since both are formed by an exaggerated importance given to the self, ego-inflation, and so on. We think self-centered psychological functioning may also be considered as a part of this dynamic, thus being a member of Generation Me may be one of the major risk factors for narcissistic personality traits and disorder [2, 12].

Narcissistic personality disorder (NPD) is a personality disorder in which there is a long-term pattern of abnormal behavior characterized by a grandiose self-view, unrealistic sense of entitlement, exaggerated feelings of self-importance, and a lack of understanding of others' feelings [13, 14]. Narcissists who consider themselves to be superior to others, and also have unrealistic expectations for the future, become angry and aggressive when in trouble, take more resources for themselves and leave less for others, and value money, fame, and image over family, helping others, and community. Though narcissism has some benefits, like public speaking, it has lots of adverse effects on human mood and behavior and comorbidities with psychological disorders [15].

The principle of “harmony” has a primary role in the selflessly functioning individual; harmony directs all mental activities (conation, motivation, attention, emotion, cognition, behavior). Harmony and emotional stability are associated with empathy, benevolence, compassion, and deep respect; all of these have a beneficial effect on behavior and a reduction of psychological distress [2]. Many studies have revealed the results of altruism on happiness and health and have consistently found a deep and intimate connection between altruism and current and future health and well-being.