Do All Roads Lead to Samarkand? 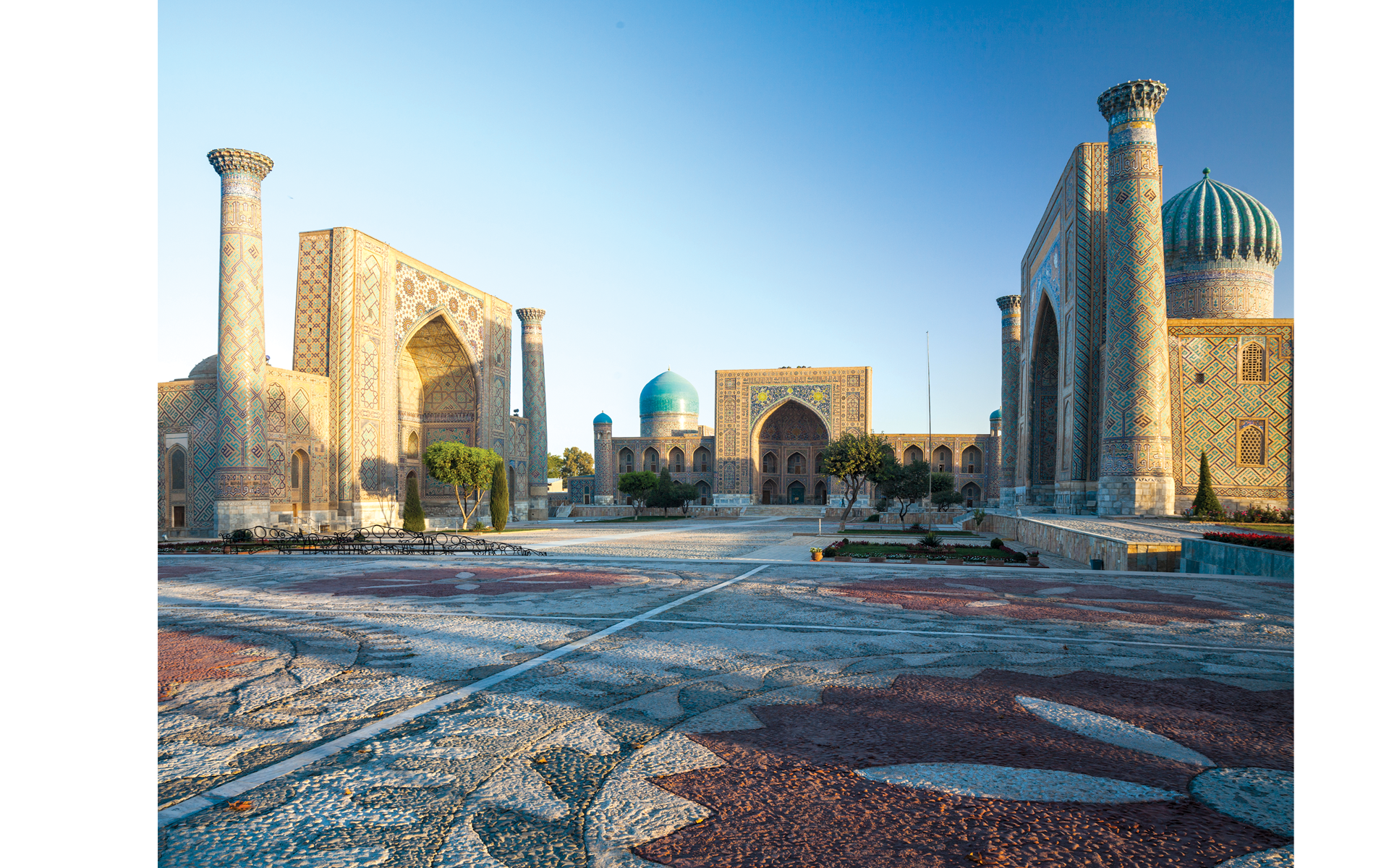 For lust of knowing what should not be known/ We take the Golden Road to Samarkand. [[1]]

The Silk Road has always been known for providing pathways that allow the Far East to exchange goods and ideas with the European West. History often remembers that the Silk Road helped Europe expand and flourish. However, the cities that lived in close proximity to the Silk Road routes also benefited economically and culturally. Samarkand, specifically, became a multi-ethnic city of trade under the leadership of Tamerlane in the 14th century. According to historian Christopher I. Beckwith, Tamerlane formed Samarkand into a “model city” [[2]]. But was it Tamerlane’s skill as a political leader, or the influence of the trade routes that brought glory to the grand city? While Tamerlane’s empire was vast and incredible, it is impossible to deny that the Silk Road played a larger role in the flourishing of Samarkand due to the market established in the city, as well as its toleration of those with different cultural and religious identities.

Timur the Lame, or Tamerlane, was a successful military and political ruler in the city of Samarkand. As a child, Timur found himself living on the Central Asian steppes where he and his tribe would migrate at the mercy of the seasonal weather [[3]]. However, as he grew older, Timur soon found himself gaining a foothold and conquering tribes, making alliances with other warlords, and looting as a missionary throughout Central Asia [[4]]. One of Timur’s most influential alliances was made with the Balkh warlord Amir Husayn. Throughout the course of the alliance between Timur and Husayn, tensions were high and it eventually disintegrated [[5]]. Despite Timur facing betrayal during his previous experience with Husayn, the two again joined forces to eventually overthrow the Sarbadar government in Samarkand in 1366 [[6]]. While ruling alongside Husayn in Samarkand, Timur gained many followers. Timur was regarded as a brave, intelligent, and generous ruler among his people though it was well known that he was also ruthless to his enemies [[7]]. With his skill to gain followers and prestige all across the Central Asian steppes and cities, Timur was finally able to make his way into the Mongol courts. After Genghis Khan died, Timur was able to cement his control as the sole ruler of the Chagatai territory on April 9, 1370 [[8]].

The ancient city of Samarkand is well known to be a melting pot of people with different races and religions. The Sogdian people are considered to be one of the first to populate the area. In fact, the first traces of the Sogdian people date back to 700 BC. Valerie Hansen of Yale University writes that it is likely that the early Sogdian settlers lived peacefully within the city as merchants, farmers, and servants. She also states that the Sogdians were also able to continue using their native language although it was not the mainstream language of the city [[9]]. However, the Sogdians were not the only people to occupy the city. When Ruiz Gonzales de Clavijo visited the city while on embassy in 1412, he noted that there were people from across the world living in the city. Clavijo wrote:

…The population now of all nationalities gathered together in Samarqand… [Amounting] to about 150,000 souls. Of the nations brought here together there were to be seen Turks, Arabs and Moors of diverse sects, with Christians who were Greeks and Armenians, Catholics, Jacobites, and Nestorians…[[10]]

These different religious and ethnic groups likely lived in peace and toleration of one another and focused on improving commerce within the city.

While Tamerlane was a successful ruler and won the respect and loyalty of his citizens, that alone did not cause the city of Samarkand to become great. Instead, the Silk Road routes are most likely the reason for the city’s strong economy. The Silk Road was a series of trade routes that stretched from China, located in the Far East, to the European West. These dangerous trade routes allowed merchants to not only sell silk, but also chemicals, spices, minerals, leather goods, and paper [[11]]. While China traded with many different countries across the known world, the country mainly focused its trade with Samarkand. The Chinese likely had a special trading partnership established with the Sogdians, who were seen as the “main contributors” to the Silk Roads [[12]]. Hansen refers to the painting that was seen in the Panjikent House. In this painting, a woman is shown who appears to be a deity. The style of art was likely influenced by the Chinese because of their relationship with the city [[13]].

The city of Samarkand also had an elaborate trading marketplace set up with the city itself. Ruiz Gonzalez de Clavijo also mentioned that the city of Samarkand was stocked full of goods and other merchandise from around the world. Some items were even exclusively sold within the city. Spices from India, for example, were “never to be found in the markets of Alexandria.” According to Clavijo, when Timur succeeded in conquering new lands, he would often bring the best craftsmen of the conquered territory to Samarkand. For example, Timur brought weavers from Damascus, gun smiths from Turkey, as well as glassmakers and armorers that were found in other locations [[14]]. Additionally, the fertile soil in the areas surrounding the city helped farmers to harvest wheat, wine, fruit, and cotton. The price of goods was then controlled to prevent inflation from rising too high. Clavijo mentions that the price of a pair of sheep would normally cost a “ducat,” which is equivalent to about six shillings. A person in Samarkand could also pay a “half a real,” equivalent to about three pence, for a bushel and a half of barley [[15]].

Aside from the strong economy and ethnic tolerance in the city, Samarkand is also known for its beauty. On his trip, Clavijo noted that Samarkand was larger than Seville and also noticed surrounding suburbs, orchards, and vineyards outside of the city. It is noted that the “most noble and beautiful houses” are also located among the vineyards, gardens, and farmlands [[16]]. Inside the city, Samarkand also possessed beautiful buildings. Historian Xinru Liu of the College of New Jersey writes that the city’s close proximity to the Silk Roads and the cultural influences from within caused Samarkand to have several different cultural buildings erected from within. For example, Liu mentions that Islamic scholars traveled along the Silk Roads and, eventually, Islamic architectural building and centers sprang up throughout the city [[17]].

Initially, the city of Samarkand was established as a military garrison by the Arabs after defeating the Turks in 712 [[18]]. Overtime, the city became prosperous and a large trading hub where people from across the world could trade for exclusive items. How did the city of Samarkand become such an influential power at this time? Some, including Christopher I. Beckwith, and Clavijo, argue that the rule of Tamerlane is what expanded the city’s influence, wealth, and power. However, it is more plausible that the presence of the Silk Roads and the city’s multi-ethnic identity is what made it great. Today, Samarkand still remains a prosperous city of trade with multi-ethnic identity [[19]].

[2] Christopher I. Beckwith, Empires of the Silk Road: A History of Central Eurasia from the Bronze Age to the Present (Princeton: Princeton University Press, 2009), 203.

[5] According to Justin Marozzi, Timur and Amir Husayn, formed an alliance via a marriage between Timur and Aljai Turkhan-agha, who was Husayn’s sister. The two men went undercover as missionaries when Timur decided that he did not want to submit to Moghul rule. It was even during this time as a missionary that Timur most like injured his leg, which never healed, giving him the nickname “Timur the Lame.” In 1365, the partnership ended when Husayn left Timur on the battlefield after resentment tore the two allies apart. They eventually worked together once more in the battle for Samarkand, but while ruling the city, the alliance once more became strained due to differences in political policies and beliefs. Husayn, reportedly, began to tax Timur and his followers because the two leaders had opposing styles of leadership. The alliance between the two officially ended when Aljai, Timur’s wife and Husayn’s sister, died. In 1370, Timur, backed by the government in Bukhara marched with his followers on Balkh to conquer Husayn’s city. Husayn was captured by one of Timur’s men and reportedly tried to bribe the guard with pearls. He was eventually brought before Timur, surrendered, and then executed.