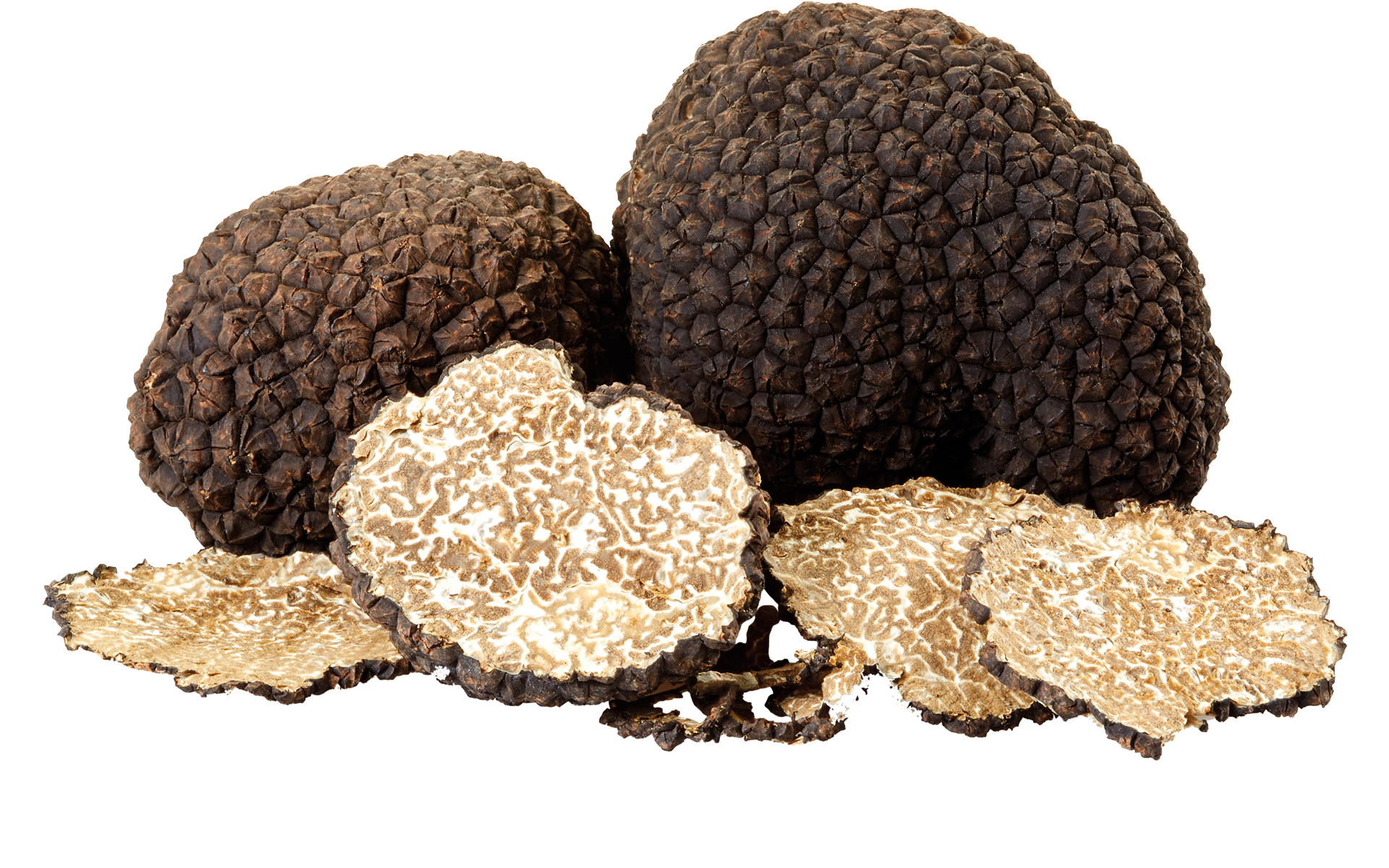 Truffles are potato-shaped underground mushrooms that grow in all kinds of different environments ranging from high-rise forests of pine, oak, linden, fir and wild hazelnut to scrubs, under bushes, and in steppes and deserts. They maintain a symbiotic relationship by attaching to the roots of certain herbaceous plants and have a unique aroma with a sharp odor. Some cultures nickname truffles as bingos or buckthorns. There is also the belief that the mushrooms sprout faster under lightning or thunder thus earning them the nickname “daughters of thunder.”

Symbiotic association between truffles and plants

Nature thrives in a harmony that is based upon assistance and solidarity. Truffles have a special place in this harmony. For example, as plant seeds germinate and begin to grow into roots, the hyphae of truffles wrap around the plant roots, just like a glove does around fingers, and help the emergence of a special structure called “mycorrhiza” which facilitates food exchange between truffles and plants. Approximately 90% of plants coexist with different types of mushrooms, and some plants even need truffles to survive. Unable to photosynthesize, truffles need plants for organic nutrients, and plants need truffles, especially for the intake of more water and minerals from barren and arid soil.

It is estimated that the mushroom hyphae can be as long as 1 km in the forest soil is estimated to be more than 1 km. Truffles help to increase the contact surface of the tree roots with the soil hundreds of times while ingesting the water and minerals from remote areas where plant roots cannot reach. In this way, as soon as a drop of rain falls on the soil, it is relayed to the benefit of plants with hyphae that are invisibly thin and kilometers long. If this partnership did not exist between truffles and plants then the giant trees that we see in forests would not be able to grow tall enough and would possibly remain as bushes due to a lack of water and minerals from the soil.

A similar relationship exists between truffles and animals in the forest. Since they are generally active at night and cannot benefit from sunlight sufficiently, wild animals meet their vitamin D needs especially from truffles, an important food source. Recent studies show that some wild animal species survive solely on truffles. A large number of mice, squirrels, bears, deer, rabbits, hedgehogs, and bird species in the US eat truffles along with some monkeys, kangaroos, and bird species in Australia.

While the toadstools in the open can spread their billions of spores to the environment, the spores of underground mushrooms remain confined in their tissues. It is thanks to animals that can spot and extract the mushrooms that these spores spread from their tissues into the rest of the environment. Wild animals can locate, dig up, and eat underground truffles due to the strong and attractive aroma of the mushrooms. On the other hand, the spores that are expelled from the animals’ digestive systems lead to the production of fresh hyphae to partner with new plants via germination. This allows underground mushrooms to have the opportunity to sustain their generation and expand their natural habitat.

The conservation of animal species that face extinction also depends on the preservation of the variety of truffle species. From this point of view, truffles in the natural habitats are the sustenance of wild animals. Bediuzzaman Said Nursi (d. 1960), a renown Turkish religious scholar, said: “Our share is in vineyards and gardens. God Almighty allocated our sustenance there. These wild fruits are the sustenance for the wild animals. We should not touch their portion.” It is also known that Bediuzzaman discouraged his students who came across plenty of apple and pear trees on the mountains from eating those fruits. This approach also sums up a guiding insight about sustainable forestry and ecosystem.

Truffles are richer in protein and minerals than other mushrooms. Their nutritional value consists of 53-76% water, 9% protein, 7% carbohydrates, and 8% minerals. Although they have high nutritional value, the most important feature making truffles superior to other mushrooms is their distinctive aromatic compounds. Due to their unique aroma, truffles attract the attention of many gourmets. It is no surprise that truffles have an exceptional place in exclusive cuisines.

Since ancient times, the medical benefits of truffles have been frequently reported. For example, Ibn Sina (Avicenna) is known to have recommended truffles for healing weakness, nausea, pain, and wounds.

Prophet Muhammad, peace be upon him, said, “Truffle is a sustenance like manna. Its sap is also a cure for the eyes.”

The belief in the nutritional value of truffles is also common in the Christian world. Between 827 and 844, Pope Gregory IV had advised the consumption of truffles to gain strength in battles.

Current studies have found that truffles contain several compounds that are essential for human health. A study published in 2016 is an important step for chronicling the fact that the extract obtained from truffle mushrooms proved to be useful in healing eye infections.

The number of commercial-value truffles collected from natural habitats constantly decreases worldwide: it has dropped from 2000 tons in 1884 to 100 tons in 1990. Today, it is around 40 tons. The main factors of this decline are the destruction of oak forests, climate change, environmental pollution, global warming, and uncontrolled picking.

Despite the dramatic decrease in the number of truffles collected from natural habitats, they are sold between $250 and $4,000 per kilo depending on the type and quality.

Under current conditions, truffles have to be grown by special means. People must grow the types of truffles that they wish to consume.

The first idea for the production of truffles came from a French farmer named Joseph Talon. At the beginning of the 19th century, Talon planted fresh seeds in the oak patches where truffles grew naturally. The existing truffle hyphae in the soil infiltrated the roots of new oak saplings and led to an increase in the production of truffles in the natural habitat. In the following years, Talon created new truffle production areas by planting the saplings he had already produced in other patches. Talon’s method is still used today.

In the 1960s, a period when there was a great decrease in the production of truffles in natural habitats, studies were conducted to find new methods. The methods developed by French and Italian scientists in the 1970s led to a massive success in truffle production. Truffle spores were inoculated at the root of oak saplings and plants were grown in greenhouses to develop only the desired truffle mycorrhizal system in tree roots. Having ensured that mycorrhiza had settled in the roots, the first truffle began to be harvested four or five years after planting the oak saplings in open areas. These methods have allowed truffle production in countries such as Australia, the USA, and New Zealand where truffles are not grown naturally.

It is estimated that there are about 10,000 different types of truffles in the world with different sizes, colors, structures, and aromas. These mushrooms, which are now listed in restaurant menus and stocked on the shelves of luxury food suppliers, are only some of the truffles numbered in thousands.

Some of the commercial types are listed below:

Tuber magnatum: Known as the white truffle of Italy, it grows in the Alba region as attached on the roots of oak, hornbeam, pine and poplar trees. It is different from all species by its peculiarly pungent aroma. It is known as the most expensive food in the world because it grows in a very limited area and cannot be grown as a cultivated mushroom.

Tuber melanosporum: Known as the winter black truffle, it grows during winter by attaching to the roots of oak, hazelnut, and pine trees in Italy, France, Spain, and the Balkans. It has a distinctive aroma and has a wider growth area as compared to the white truffle. It is the most cultivated type of truffle in different continents of the world.

Tuber aestivum: Known as the summer black truffle, it grows by attaching to the roots of oak, nut, and pine trees in a wide geography spanning from Portugal to Azerbaijan, Morocco to Poland, and Sweden to Afghanistan. It bears lower economic value because it is widely grown and has an easily extracted culture and a lower-density aroma.

Terfezia claveryi: It grows in the spring across steppes and deserts by attaching onto the roots of herbaceous plant species belonging to the genus Helianthemum. It has a unique aroma and has a huge market in the Arab countries. Its culture has started to be extracted in recent years.

Oregon truffle: It grows in winter as attached on the roots of fir trees in Oregon, Washington, and Vancouver. It has white and black types. It has an important market in the U.S despite not being as valuable as the black and white species found in Europe. No results have been obtained from cultural studies yet.

Picking truffles is like picking apples from a tree with the difference that truffles are collected from the root of the tree. It is difficult to understand whether the truffle underground has ripened or not. If the extracted truffle is not ripe enough then its economic value immediately suffers. That is why special dogs are bred to locate truffles. Sensitive to the truffle aroma, these dogs lead their owners by simply pointing out to the places where ripe truffles are found. These dogs are motivated by rewards and are encouraged with better rewards for finding higher quality, larger, and more ripe truffles.