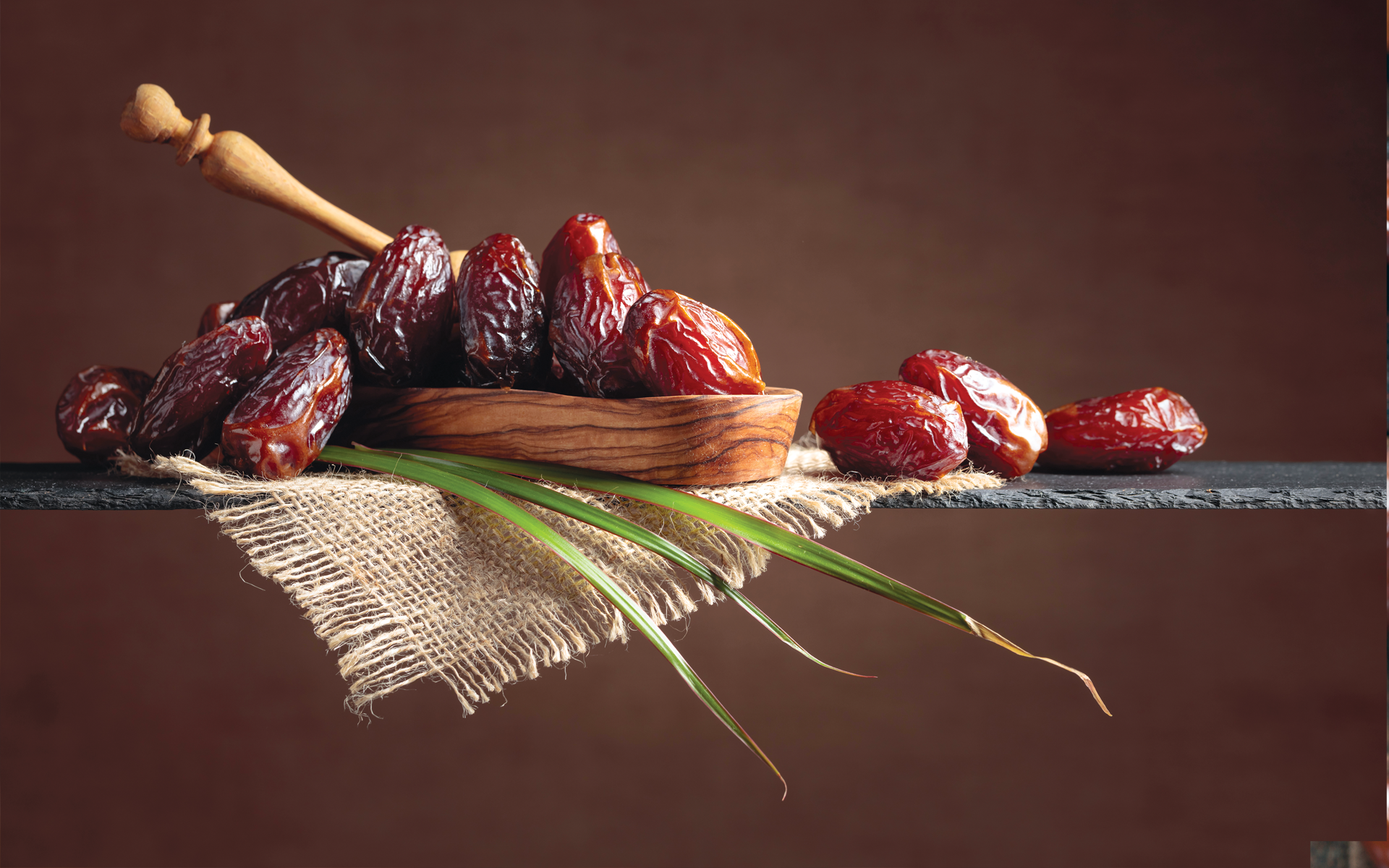 The date is a fruit that is mentioned both in the Qur'an and the Bible, and is introduced as a symbol of fertility and vitality in the Old Testament. The New Testament mentions people going out with palm leaves to meet Jesus when he was entering Jerusalem (John 12:13), which is celebrated by Christians as Palm Sunday. Many verses in the Qur’an refer to dates while counting the blessings given to humankind: “And there are (among the produce that God brings forth as nourishment for you on the revived earth) the fruits of the date-palm, and grapes: you derive from them intoxicants and good, wholesome nourishment. Surely in this there is a sign for people who reason and understand” (16:67).

The following verse denotes an unknown feature of the date that draws our attention:

And the throes of childbirth drove her to the trunk of a date-palm. She said: "Would that I had died before this, and had become a thing forgotten, completely forgotten!" (A voice) called out to her from beneath her: "Do not grieve! Your Lord has set a rivulet at your feet. And shake the trunk of the date-palm towards you: it will drop fresh, ripe dates upon you. So eat and drink, and be comforted. If you should see some person, say (through gesture): ‘I have vowed a fast of silence to the All-Merciful, so I cannot speak to any human being today.’” (19:23-26)

There is much wisdom in God’s instruction of Mary to eat dates. It was one of the blessings offered to facilitate Mary’s delivery. In recent years, a great deal of information has been obtained on the importance and benefits of dates, especially for women who are pregnant and during delivery. On top of quenching the needs during pregnancy, dates have been found to be useful in facilitating birth, avoiding troublesome surgical processes such as cesarean section, and meeting the needs of both the mother and the newborn.

Dates are a complete package

It is believed that dates were first grown about 8,000 years ago. Over time, they developed into different strains, resulting in over 200 different varieties with various shapes and flavors. However, dates differ very little depending on the soil and climate in which they grow in terms of the amount of compounds that they contain as food. Depending on the varieties, 21-22% of dates is water, 1.7-2.2% ash, 1.8-2.3% protein, 0.4-0.6% oil, 2.2-5.8% are fiber, and 71-74% are carbohydrates. Dates are rich in a wide variety of vitamins, minerals, fatty acids, enzymes, anthocyanins, phenolic compounds, sterols, carotenoids, alkaloids, polyphenols, tannins, P-coumaric acids, terpenoids, procyanidins and flavonoids. They also have the ability to remove free radicals and bind heavy metals thus preventing oxidative stress and inflammation. Antioxidant metalloenzymes, such as superoxide dismutase and glutathione peroxidase, play an important role in many biological functions in the body [1].

Tannins and alkaloids are very effective compounds to prevent parasites, bacteria, viruses, and fungal infections. Dates are considered a complete dietary food as they contain special fatty and amino acids as an important carbohydrate, vitamin, and protein source. One kilogram of dates has about 2850-3000 calories.

Beta carotene, which is stored as a precursor of 35 mg of vitamin A in 100 grams of dates, improves eyesight, and strengths our body resistance, bones, and teeth. Betacarotene has the ability to prevent cancer by controlling molecules that attack cells. Apart from that, dates contain 0.08-0.13 mg Thiamine (B1); 0.13-17 mg Riboflavin (B2); 0.14mg Pyridoxine (B6); 20 mg Folic acid (B9); 3-17.5 mg vitamin C; 0.2 mg of vitamin E and Niacin (B3) acid. The need for folic acid during pregnancy is doubled, so it is a vitamin that women must take. In addition, folic acid is a vitamin that plays an important role in the production of amino acids, which are new blood cells and building blocks in the renewal of cells. Insufficient folic acid levels can cause red blood cells to become larger than normal but weaker in function, which brings about symptoms of anemia. Vitamin B1 found in dates helps the nervous system to be healthy, convert carbohydrates into energy, and use proteins and fats whereas vitamin B2 helps burn protein, carbohydrates, and fats to provide the body with energy and regeneration of cells. Scientists who also draw attention to the stress and strain relief effect of dates believe that this is due to different types of vitamin B. In addition, the nutritional value of dates increases in significant amounts thanks to the amount of fiber it contains (6.4 -11.5%).

Potassium deficiency is revealed during pregnancy due to various physiological difficulties, especially nausea. Potassium, which is abundant in dates, is of great importance in this regard, and it is also very effective in maintaining the water balance in the body.

Dates give the body energy and vitality with its carbohydrates (73%). A large amount of this consists of glucose, fructose, other carbohydrates such as sucrose, xylose, mannose and lactose, which are easy to digest and useful for the body. There are 284 calories in 100 grams in total. Doctors state that pregnant women should be given food with fructose the day they give birth in order to energize the mother's weak body, activate milk hormones, and to increase breast milk production in order to feed the newborn.

Blood loss during childbirth causes body sugar levels to drop, and dates are important for maintaining sugar levels, and preventing low blood pressure. It is especially useful for weak or tired people thanks to its high calorie value. This information reveals the wisdom behind why Allah instructed Mary to eat dates in order to give her the energy, vitality, and breast milk that would be necessary both for her and her newborn.

Their effect on reproduction and fertility

The wisdom behind the verse in the Qur’an in which Mary is being told to eat fresh dates while delivering Jesus may be related to the presence of oxytocin in this fruit. Oxytocin is an interesting hormone which has physiological effects on our body, especially during childbirth. Its release in our bodies has been found to be increasing when acts of love and compassion are shown, for instance, between spouses, parents and children, by caressing child’s head or touching one another. Especially during pregnancy, the release of this hormone can be increased by treating pregnant women with compassion and affection. Therefore, it is important to maintain peace and tranquility between spouses for oxytocin to play its part in order to attain a healthy pregnancy process and easy delivery.

Oxytocin is essentially a hormone secreted in the brain that initiates labor pains. All preparations of the body before birth are triggered with this hormone. Shortly before the onset of labor pains, there is an increase in the number of oxytocin receptors in the uterus and this hormone plays a key role in initiating contractions of the uterine muscles during delivery. This hormone, which stimulates the strong contraction of the mother's womb, is extremely important for delivery. In addition, the uterus narrows the blood vessels and triggers the contractions of the muscles that are used to stop bleeding immediately after birth. It facilitates the separation of the placenta from the uterus. It is mentioned in a study that it shortens the delivery process [2]. It initiates the flow of milk into the gland duct, providing contraction of the muscular epithelial (myoepithelial) cells that cover the mammary glandular cells in the breasts.

Miraculously, the baby’s touching her mother to suckle has been found to contribute to more oxytocin release and increase the amount of milk. Moreover, it lowers the cortisol level and the blood pressure in order to reduce the effects of stress that might be caused by the fear of delivery. Of course, low blood pressure will also reduce bleeding. Two other benefits are that it has an accelerating effect on lesion healing and helps with weight loss.

Dates have been used to treat infertility for centuries, and studies are now showing the pollen obtained from male date trees may be the reason why. These studies conducted so far support the idea that dates can increase male and female fertility with microelements isolated from estrogen and sterols. In one study, date pollen was reported to improve sperm motility and viability along with the acrosome reaction in the head of sperm [1]. In another study,[4] male date pollen has been shown to cause an increase of the weight of the female reproductive organs and an increase in the amount of serum testosterone, testicular weight, sperm count, and quality in men. In male rats fed with date pits, a significant increase in testosterone and luteinizing hormones had been detected [5]. In another study, date pit oil had a significant role in the increase of sperm count, motility and viability in male mice [6]. In another study that involved mice that were fed with dates, it was found that oxytocin hormone levels increased and showed positive side effects on uterine muscles [7]. In addition, a study found that date pollen extract was effective in a significant increase of sperm count and motility, luteinizing hormone, testosterone, and estradiol levels in serum.

With new research, the positive aspects of antioxidants in dates, as explained above, is gaining more ground in the scientific community [8]. A recent study has shown that consumption of dates facilitates relaxation in the cervix, increases the integrity of the embryo protective membranes, significantly reduces both the first and second stages of pregnancy, and causes a significant increase in normal birth rates [9].