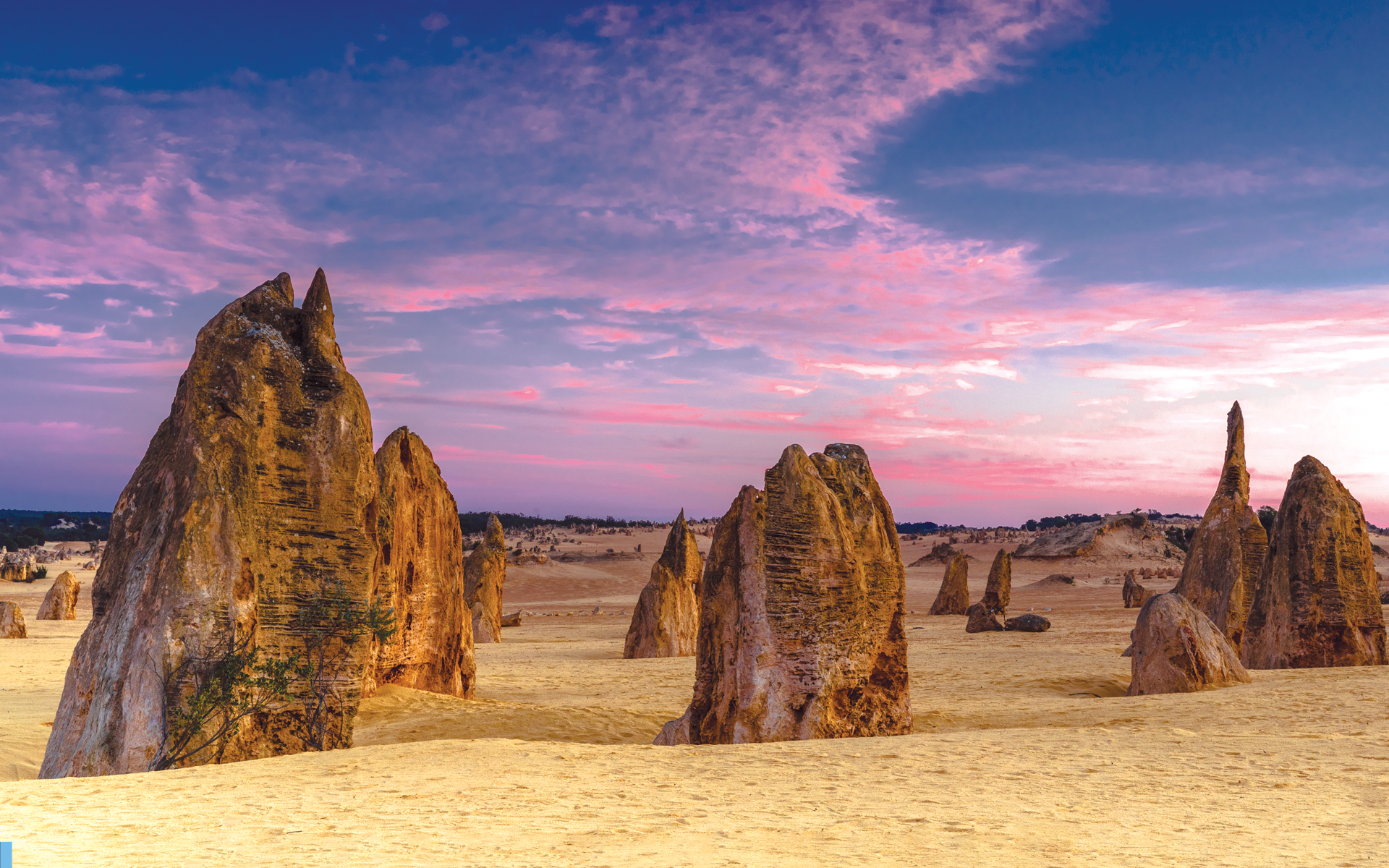 There is an extraordinary forest in the south-western part of Australia that often fascinates its visitors. Contrary to what we know and might assume, it is a forest consisting of not trees but sharp stone columns. The legendary Pinnacle Desert is home to these marvelous towers of stone, each with a look more fascinating than the other. An extensive stretch of this desert is located in Nambung National Park, 245 kilometers from the Perth city center.

Breaking through the routine in our mental realm, these ghostly limestone columns in an eerie silence attract many photographers from around the world. This is, in fact, a unique landscape that invokes contemplation despite having scarce vegetation and trees but being rich in conspicuously shorn columns. With its diversity, this panorama stimulates minds, urges thinking, and attracts inquisitive eyes to close observation, and virtually whispers to the hearts: “Read me!”

Besides the centuries-old enigmatic beauty of this geography, the jagged columns rising from the giant sea of yellow quartz sand evoke the view of the moon’s surface. Spanning over 4 square kilometers in the desert, one can observe a wide assortment of rock pillars, varying from huge rocks as high as 5 meters to some that are only the size of a pen. The density of these rocks differs significantly and can reach up to 2 meters in width. While the distance between lined-up structures ranges between 0.5 to 5 meters in dense spots, a general inspection also shows the distance between them varying from a few centimeters to 20 meters.

While they are generally in a conical shape and have a mushroom-like appearance with a rounded cylindrical structure that resembles hollow pipes or tombstones, some of these tall rocks are finger-shaped and look a lot like termite skyscrapers. There are even some that look like auricles. Apart from these, the rocks in multiple compound, cave-shaped, and pipeline-like structures formed of merged concentric columns are conspicuous on site.

Each of these columns, which have endured for thousands of years, are named according to their appearance. In addition to names such as “Elephant Foot,” “Garden Wall,” “Camel,” “Kangaroo,” “Molar Tooth,” and “Red Chief,” there are also group names such as “Ghost Silhouettes” because they resemble ghosts who are having a meeting. Although they show similar features, the fact that each column is of different size, shape, and feature illustrates that each was created as a specific letter bearing a message for us, or as a separate book to be read and appreciated.
This breathtaking landscape in the Pinnacles Desert appears best at dawn or twilight. The columns grow even more terrifying when they cast eccentric shadows on the undulating sand dunes. Although the desert is intertwined with wildlife, most of the animals in the area are nocturnal. At night, it is also likely to encounter gray kangaroos, reptiles, emus, and several bird species which droop like kites around those unusual rock formations.

From Sea Creatures to Stone Columns

Researchers state that the raw material of the pointed columns originated from soft-bodied sea creatures such as sea snails. They believe that the pulverized shell remains of these creatures, which lived in warm waters 700 to 120 thousand years ago, are the source of the limestone silt within the rock formations. It is also stated that the sand carried by winds and waves to the shore accumulated in layers over time and helped form the dunes.

According to research, plant root nets and humus deposits in the region sustained the permanence of the dunes during the formation of the columns. While the acid rains in winters caused the corrosion of the materials in the soil, the dissolved material turned into cement after extreme soil desiccation in summers. Limestone deposits were then created with the fusion of particles. Plant roots pushing the cracks in the hard layer and water penetration into the site over time eroded the limestones to the extent of forging more durable sediments. The rock columns reached their final form as a result of rains, wind erosion, and abrasion by plant roots over the centuries.

Stone columns, believed to date back to 25-30 thousand years, were first discovered in 1956 by Harry Turner, a historian from Perth. In time, chemical and structural analyses were carried out on many samples from these marvelous rock structures and were revealed to have been formed from Pleistocene Tamala Limestone that contained cyclical arrays of paleosol, calcarenite, and calcrete.

The analyses showed that the material in some columns are primary calcarenites and consist of component layers such as layered dune, calcrete, and paleosol. The strong resistance of the materials is a likely outcome of a robust cementation process that was triggered partially by roots subjected to chemical and mechanical processes. The rhizoliths revealed in the chemical analyses of the material indicate the presence of plant roots in the past.

Other rocks found on the site have secondary cemented pipe or tube filling as material. The polygenetic origin of these vertical tubes are solutions that are likely to have originated from concentrated water flow triggered by root activities. Two types of structures were identified in some towers of stone.

Several researchers believe that numerous complex processes are valid explanations for how these rock formations formed instead of just the theories presented to this date. The researchers also state the need for conducting advanced research to shed more light on these processes.

While not as dense as in the desert, the sharp columns can also be observed in several other locations that do not meet the mentioned climatic and geographical conditions. Likewise, even with root activity, the presence of solution pipes, corrosion, and wind erosion in the surrounding areas, there are locations where no stone columns exist. In more detailed future research, more exclusive secrets of these columns may perhaps be discovered.

These obelisk-like rock formations offer us an extensive feast for exploring the essence of phenomena. Bearing exclusive features and extraordinary equipment under their hard and lifeless appearances, these rocks are an exquisite exhibition of fine arts offered to our contemplation.