A Miraculous Fruit – 2: Dates as Nutrition and Medication 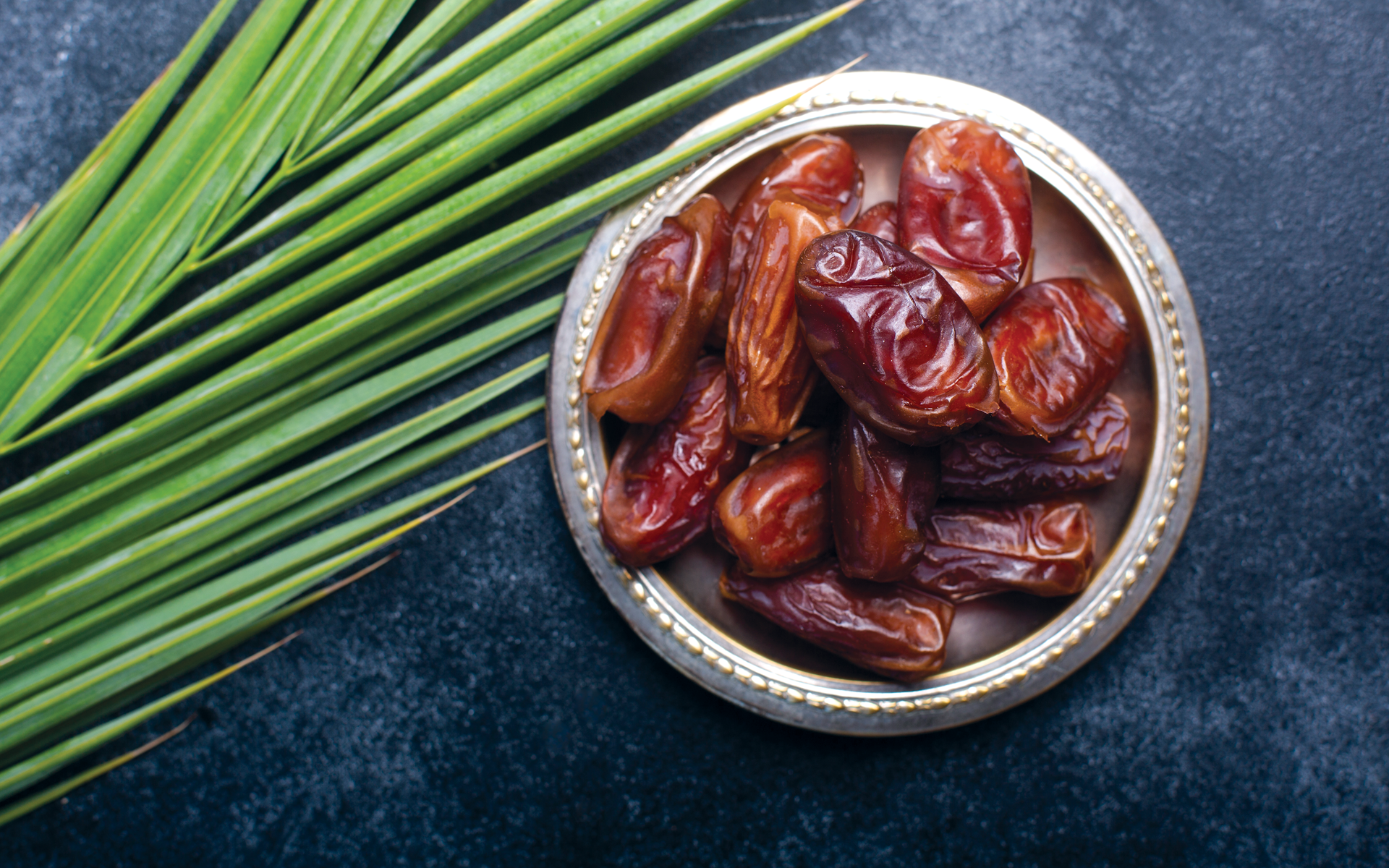 In our previous issue we briefly mentioned that the date fruit facilitates delivery and can be eaten to help prevent infertility. This article will continue to examine their manyfold health benefits with a specific focus on their protective features against many diseases.

Dates contain all of the 8 essential amino acids that should never be neglected in nutrition and are not made in the body. Additionally, the fact that dates offer 10 non-essential substances that can be made in the body means that all the necessary materials for the synthesis of these proteins, which serve as the basic building blocks of the human body, are present in dates. In this sense, date is a very unique fruit, and this is why a human being could survive on only dates and water for years. V. H. W. Dowson, one of the renowned experts on this subject, says that a date and a glass of milk will be enough to meet a person's daily nutritional needs.

Other fruits are generally poor in protein while dates provide protection of the body against diseases and infections by providing amino acids, proteins, a renewal of cells, and a balance of body fluid. Meat is also useful for the body, but it may not be as useful as dates, especially during pregnancy. As a matter of fact, excessive consumption of meat in such a period may cause poisoning in the body. A diet consisting of light vegetables and fruits, such as dates, is more suitable.

A store of elements and amino acids

Dates contain more than 10 elements that are vital for keeping the human body healthy and fit. A hundred grams of dates contains 65 mg calcium, 521 mg potassium, 20 mg magnesium, 72 mg phosphorus, 2.69 mg iron, 0.06 mg sodium, 0.05 mg copper, 0.06 mg zinc, 0.07 mg manganese, sulfur, chlorine, and selenium as well as other elements that are very important for metabolic processes in the human body. Some studies have reported that the amount of minerals found in dates is three to five times higher than those found in apples, bananas, oranges, and grapes. Sodium and chlorine are effective in the activity of the muscular and nervous systems, in adjusting appetite, and protecting the body from gaining weight. They also take part in regulating the pH level in our blood and the water in the body. Sulfur is part of the amino acids cystine and methionine and is involved in the synthesis of many proteins.

In addition, potassium helps transport oxygen to the brain as a result of which we have clarity of thought. Moreover, it provides alkaline (basic) features that are suitable for body fluids. It stimulates the kidneys to remove toxic body waste, and additionally helps to lower high blood pressure and ensure the formation of healthy skin. Calcium and phosphate are essential minerals for muscles and healthy bone development, whereas magnesium is required for the kidneys and energy metabolism. Iron is necessary for the production of hemoglobin in the red blood cells. A person can meet the need for magnesium by eating 2-3 dates a day, and iron by eating 15 dates a day. These amounts will also prevent anemia.

Having been wisely created as a host of so many substances, dates surely have healing features. Numerous studies have been carried out on its feature of terminating harmful “free radical” molecules as well as its antioxidant, antimutagenic, anti-microbial, anti-inflammatory, antihyperlipidemic (anti-greasing) effects. Many studies have been done on the protective immune stimulating effects of dates against the stomach, liver, kidney diseases, and cancer. There are also other studies on the benefits of the seeds, pollen, leaves, and syrups of dates.

In studies of its antioxidant effects, the date fruit has been shown to reduce oxidative stress that damages cells. The protective effect of high levels of vitamin C, A, E, and phenolic substances acts as a powerful antioxidant by accelerating the activity of enzymes such as catalase, glutathione reductase and glutathione S-transferase [1].

The components of a date have been found to initiate an antitumor activity. Research found that date juice stops the melanoma cell that causes epithelial colorectal adenocarcinoma, which is a type of intestinal cancer and a type of skin cancer [2].

Effects on diabetes, raising of glucose and fat in blood

The glycemic indices of the sugars in dates are as follows: Maltose (105), Glucose (100), Sucrose (68), Lactose (46), and Fructose (23). Their absorption rate by the body is also different. Glucose is absorbed fastest while fructose is absorbed later. These absorption and glycemic index differences show that dates do not raise blood sugar fast and provide an increased feeling of fullness and are a food that can be used easily for diabetics. They do not raise blood sugar rapidly thanks to the fact that the total glycemic index of a date is 39. This may be due to its minerals, phenolic, and phytoestrogen components. Magnesium plays an important role in regulating and secreting the effect of insulin. Zinc, on the other hand, stimulates the production and release of insulin while strengthening the effect of chromium insulin. Selenium has also been shown to promote glucose uptake.

Phenolic compounds delay the absorption of carbohydrates, preventing the rapid rise of sugar in blood. In scientific literature, the antidiabetic effect of dates have been proven. Lab studies have shown that a-glucosidase and a-amylase were suppressed, thereby delaying digestion and absorption of carbohydrates and normalizing glucose levels in plasma. The effect of date leaves, hydro-alcoholic extract and aqueous solution of seeds are also shown. In another study,[3] scientists treated diabetic rats by giving each rat 10 ml of reconstituted date seed powder per day. It was then observed that the serum glucose, cholesterol and triacylglycerol levels of rats returned to normal values.

There is a great deal of research on the anti-inflammatory effects of dates, expediting wound healing processes, and protecting the heart. Al-Qarawi et al. found that the juice obtained from dates is effective in improving the severity of gastric ulceration and reducing histamine and gastrin concentrations. According to the authors, the anti-inflammatory properties of date extract can be explained by its antioxidant effect [4]. In another study conducted on dates grown in Algeria, it was shown that the extract given orally produced a significant reduction in wound edema in Swiss albino mice. Presumably, this effect is due to the suppression of inflammatory cytokine enzymes that can interfere with prostaglandin synthesis of some active substances in date sap.

There are a lot of studies about cold pressed date juice. A study found that the juice decreased the reproduction of Streptococcus causing febrile disease by 88.5%. Another study found that sap extracts dissolved in water and ethanol have a strong antibacterial activity against Escherichia coli, Salmonella enterica, Bacillus subtilis, Staphylococcus aureus, Pseudomonas aeruginosa, Salmonella abec and Enterococ. This germicidal effect is thought to be caused by tannic acid, gallic acid, itaconic acid and ferulic acids that are present in dates [5]. In another study, different degrees of influence were observed between different types of dates. It has been reported to be more efficient against Gram-negative bacteria due to the presence of an outer membrane in Gram-positive bacteria. This effect against microbes is due to phenolic compounds that enable the production of hydrogen peroxide, which stops the growth of bacteria.

There are many studies about the protective effects of dates on the liver, kidney, and nervous system in neutralizing the oxidative stress and poisonous compounds that are obtained from food. It has been shown that p-Sitosterol, a bioactive compound often found in dates, is beneficial for liver injury when date seed powder is added to drinking water [6]. Another study showed the anti-damage effect of the succulent extract of dates on damaged liver cells related to oxidative stress [7].

It is known that toxic substances that enter our body from the environment in various ways can cause great damage to us, especially to our kidneys. An extract prepared from date seeds has been shown to provide significant protection in the kidneys and remove harmful free radicals. This is thought to be due to the proanthocyanidin it contains. Another study showed improvements in mice with impaired renal function.

Scientists concluded that dates show significant improvements in the damage done to the kidneys by aflatoxin, a dangerous fungus that reproduces in foods, which can also be attributed to its antioxidant properties. Scientists believe that the effect here is due to the common effect of melatonin, vitamin E, and ascorbic acid in the extract [8].

Its influence against nerve poisoning

Free radicals have been extensively proven to cause aging and a multitude of age-associated diseases such as Alzheimer's, Parkinson's and dementia due to circulatory system failure [9]. Antioxidants obtained from plants have long been used to help prevent neurons from weakening and dying [10]. Studies are concentrated on the effectiveness of joint protection by polyphenolic compounds (resembling flavonoids and plant sterols) and the ascorbic acid that is found in date extract.

Its effect on the cardiovascular system

Dates have been used against high blood pressure for centuries. In one study, an enzyme in dates has been shown to suppress a specific blood pressure hormone called angiotensin [11]. High sodium and low potassium intakes increase blood pressure, whereas dates help maintain electrolyte balances and keep blood pressure in control. Magnesium and calcium in dates play a key role in this control [12]. It has been reported that cholesterol absorption and metabolism can be regulated by the suppression of cholesterol production in the liver due to the fermentation of phytoestrogens in dates [13].

In another study, a Pakistani date variety has been shown to be very effective in lowering compounds such as preprandial blood sugar, cholesterol, triacylglycerol, LDL, and VLDL. In another study, some chemical components such as P-sitosterol, proanthocyanidin, catechin, quercetin, anthocyanins, and selenium have been shown to both protect the heart and lower blood fats [14].

Each and every day, scientific studies are teaching us more about dates and how they have been equipped with more features than any other fruit as we strive to unveil the wisdom and mercy among the bounties offered to us in the shape of food.